Let’s find out what the performance differences are between the Nvidia RTX 2070 Super Max-Q and 2080 Super Max-Q graphics. 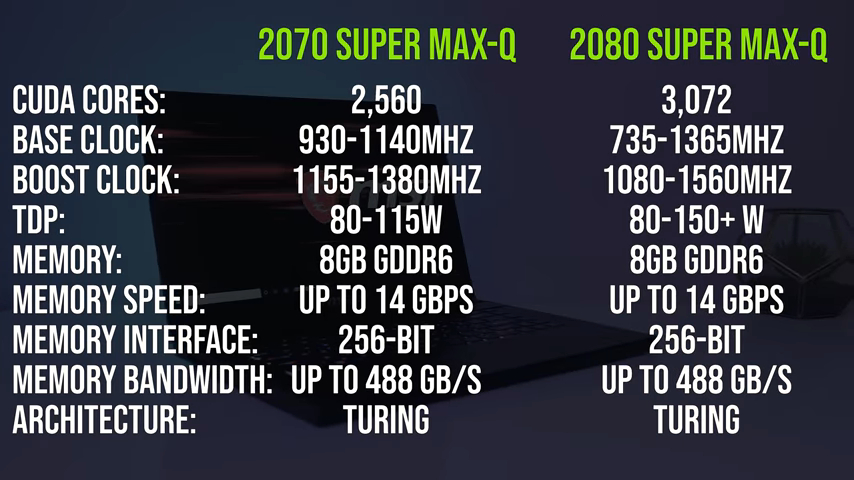 Starting with the specs, the key difference is that the 2080 has 20% more CUDA cores and potentially higher boost speeds. They’ve both got the same memory, and in this testing both also run with the same 80 power watt limit, which is the minimum for these parts.

The laptops I’m testing with are the MSI GS66, and MSI Creator 17. 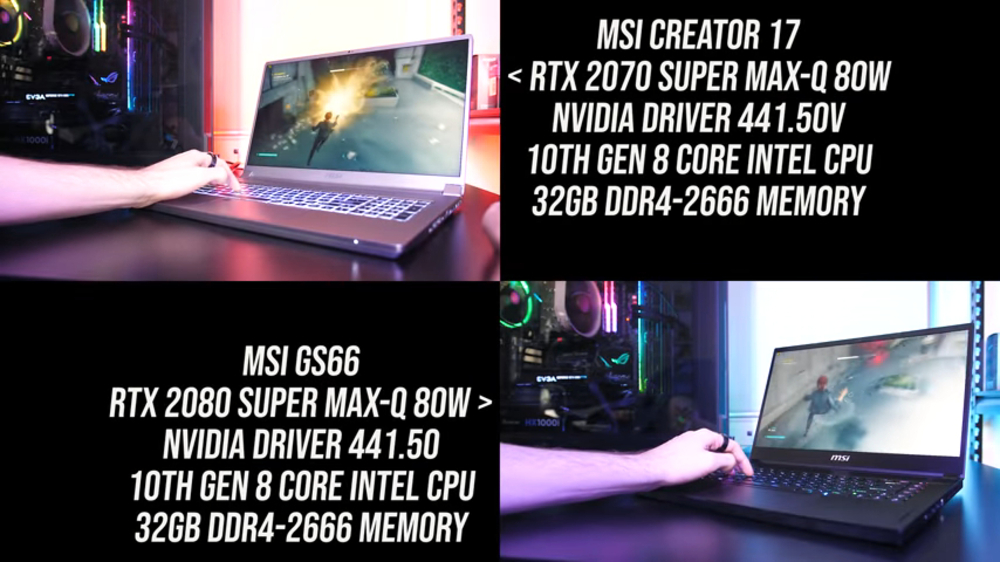 Both have the same 10th gen 8 core Intel CPU and dual channel memory with the same Nvidia drivers. We’ll start by comparing games, then other applications like 3d rendering, thermals and power draw afterwards. 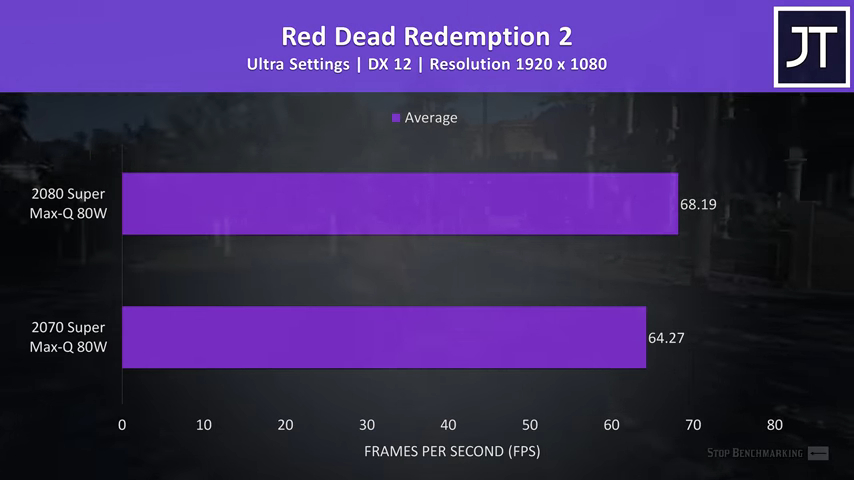 Red Dead Redemption 2 was tested using the games built in benchmark tool. I’ve got the 2070 Super Max-Q down the bottom, and 2080 Super Max-Q up top, those names are too long, so I’m just going to refer to them as 2070 and 2080 respectively going forward. Anyway at max settings the 2080 was 6% faster. 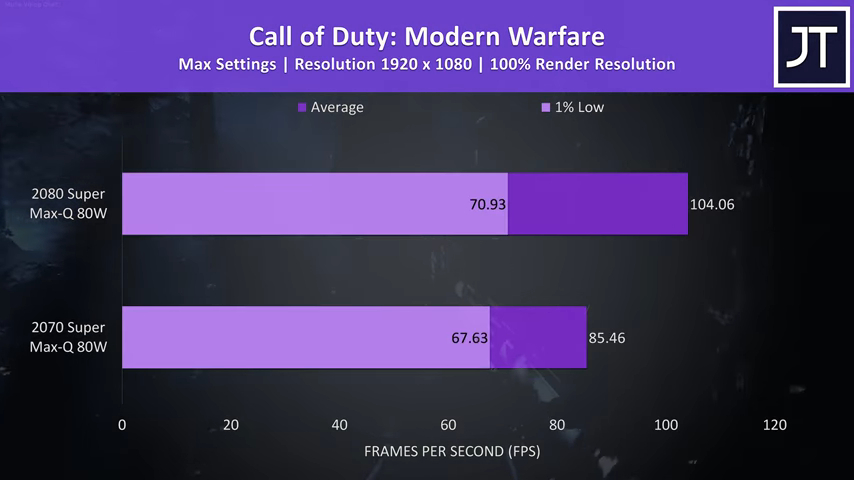 Call of Duty Modern Warfare was tested running through the same section of the game on both laptops. The 1% low performance wasn’t that different, however the 2080 was performing almost 22% better in terms of average FPS, though this was one of the better results out of all games tested. 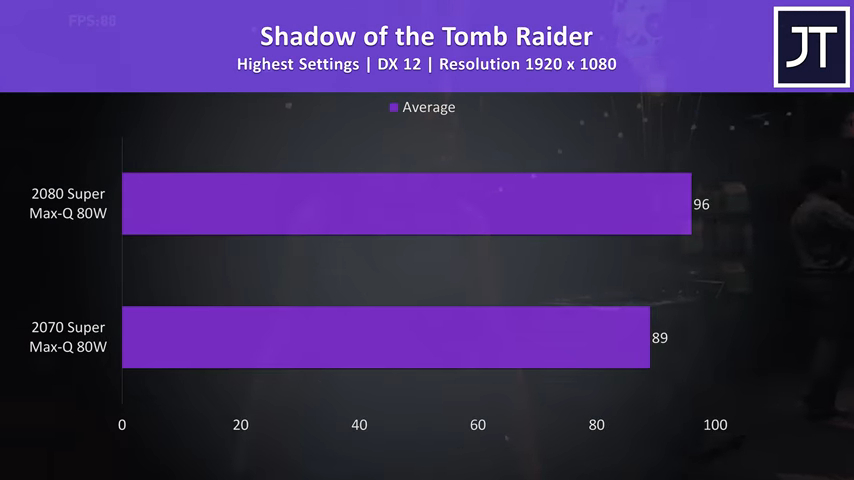 Shadow of the Tomb Raider was tested using the games benchmark tool, and the 2080 was hitting almost 8% higher FPS with the highest setting preset in use. 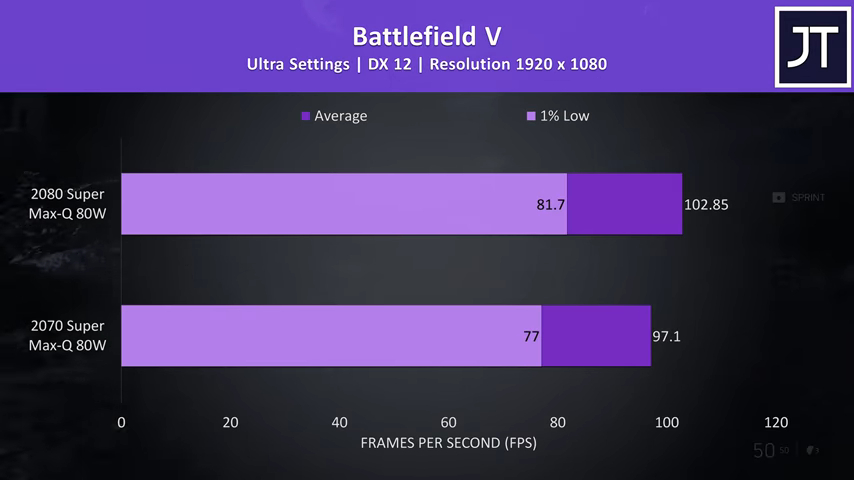 Battlefield V was tested running through the same part of the game on both machines. In this test the 2080 was just 6% faster in terms of average FPS with ultra settings, so nothing major here, and not really enough of a change that you’d be likely to notice. 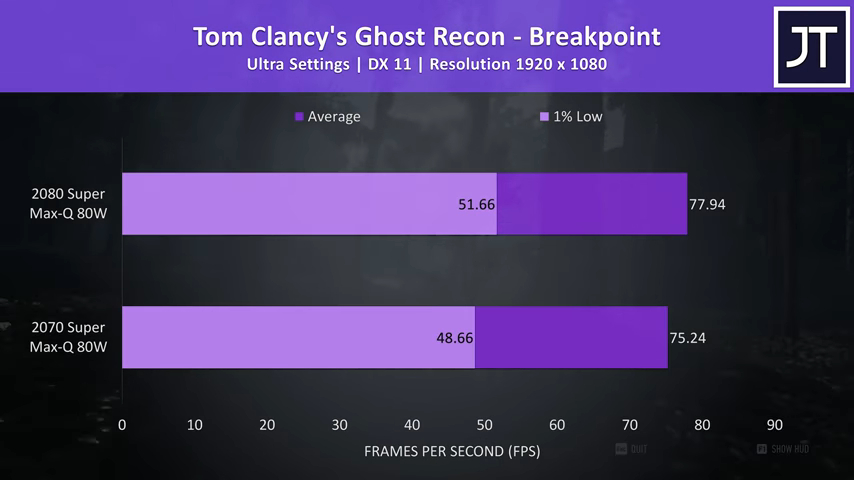 Ghost Recon Breakpoint was tested with the games built in benchmark. This game saw one of the smallest differences out of all titles tested, with just a 3.5% higher average frame rate with the 2080 using the ultra setting preset. 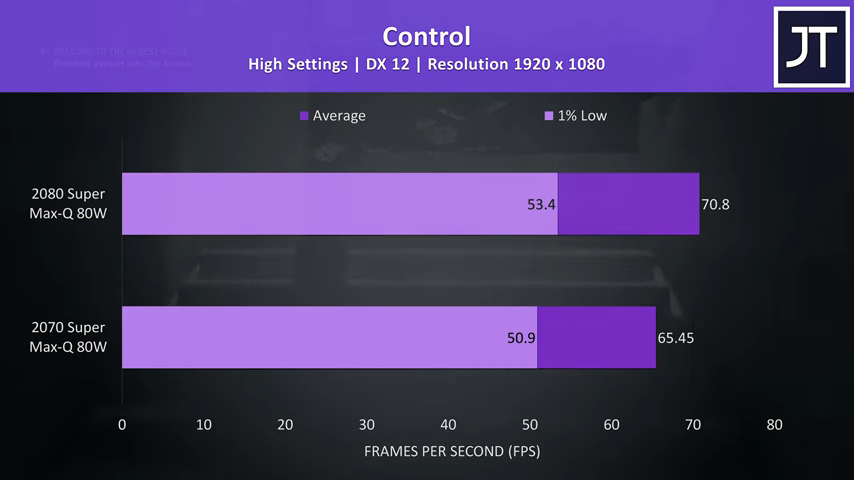 I’ve tested Control by running through the same section of the game with the high setting preset. There was an 8% higher average frame rate in this title with the 2080, with a lower 5% boost to the 1% low performance. 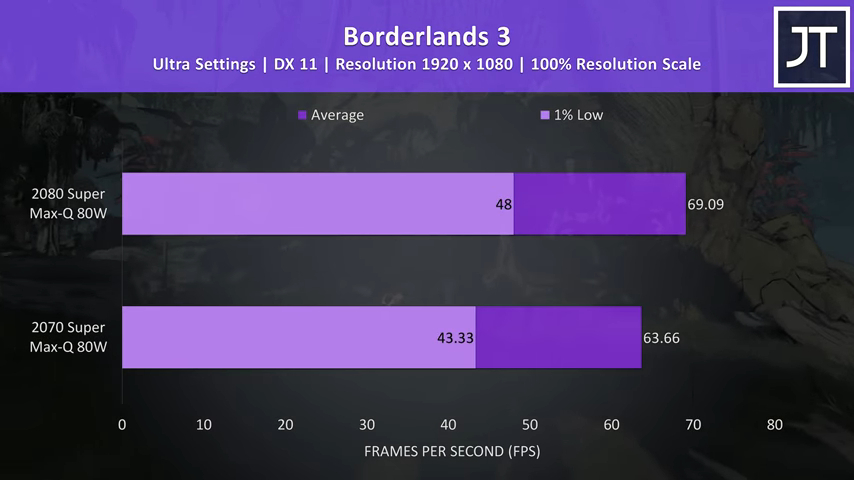 Borderlands 3 was tested using the games benchmark tool, and again as expected the 2080 is ahead with a similar 8.5% boost to average FPS with the ultra setting preset. 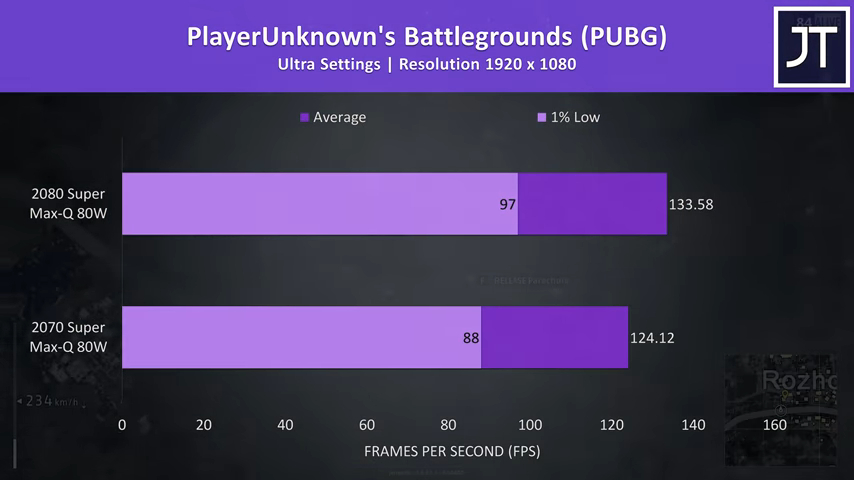 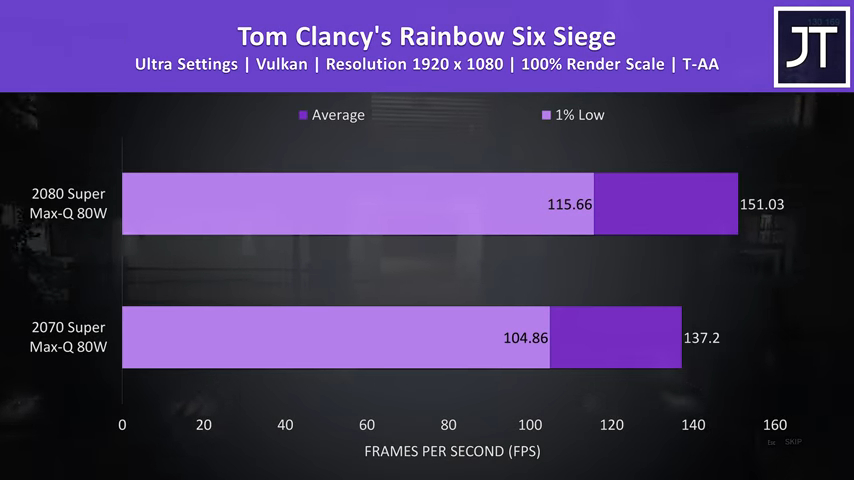 Rainbow Six Siege was tested using the built in benchmark with Vulkan, and the 2080 saw an above average 10% higher average FPS. 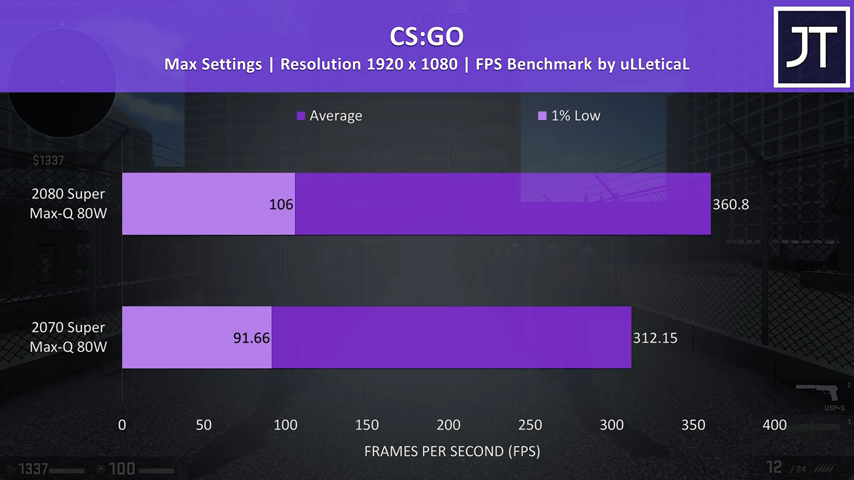 CS:GO was tested with the Ulletical FPS benchmark, the 2080 was just under 16% faster in average FPS in this test, but realistically above 300 FPS from either is still excellent. 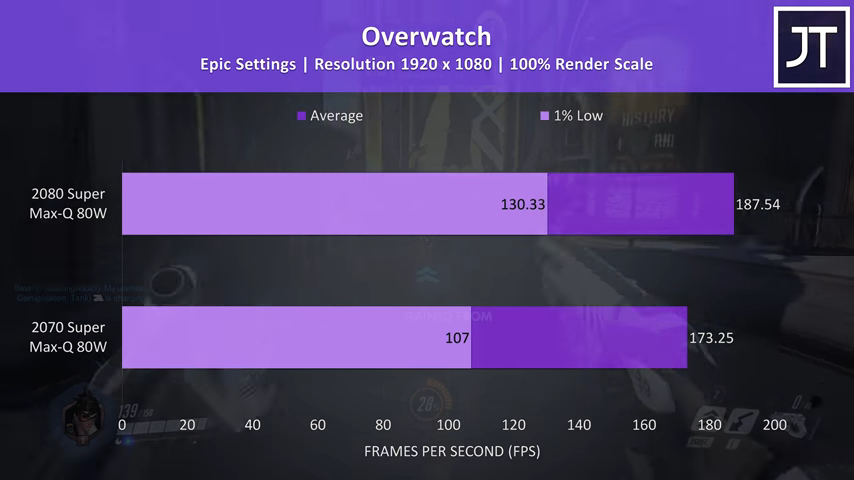 Overwatch was tested in the practice range as this allows me to perform the exact same test run, however actual gameplay does perform a bit worse. The 2080 was 8% faster in average FPS, however there was a larger boost to 1% low, which was 22% ahead. 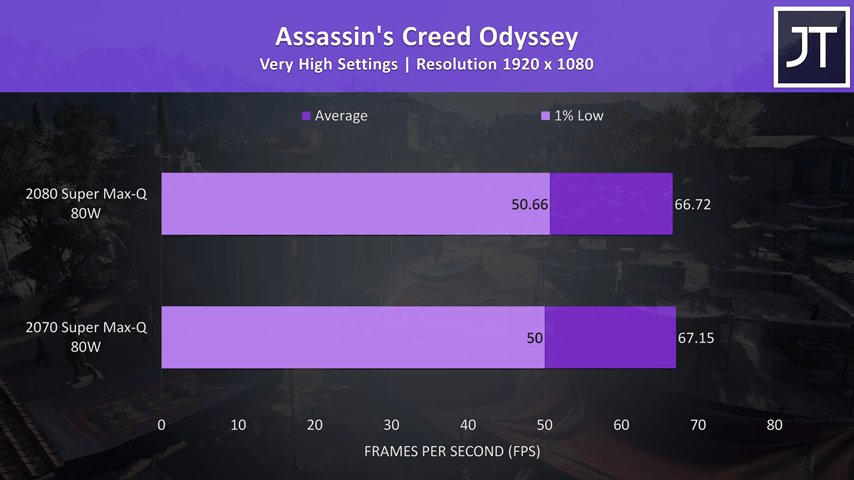 Assassin’s Creed Odyssey was tested using the games benchmark tool, and there was almost no difference in this test with very high settings. The results are so close realistically it’s within margin of error territory even though I am taking the average of 3 test runs. 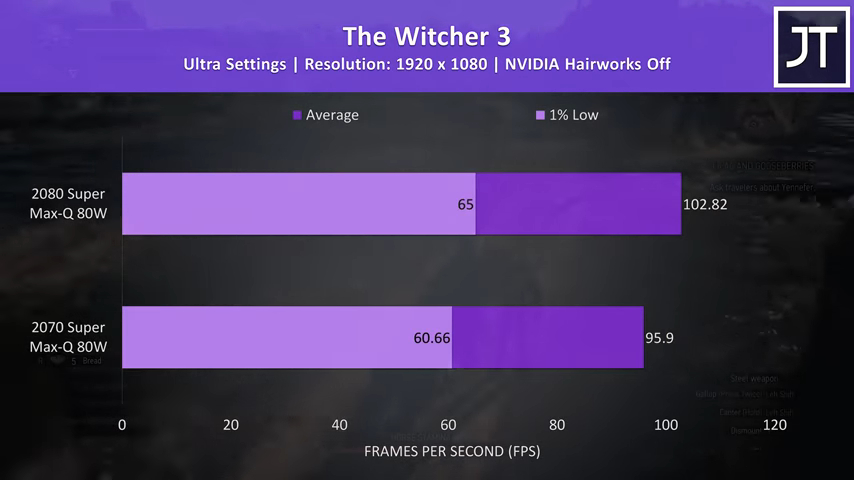 The Witcher 3 was tested in the same section of the game, the 2080 was 7% faster in average FPS, and there was a similar change to the 1% low too. 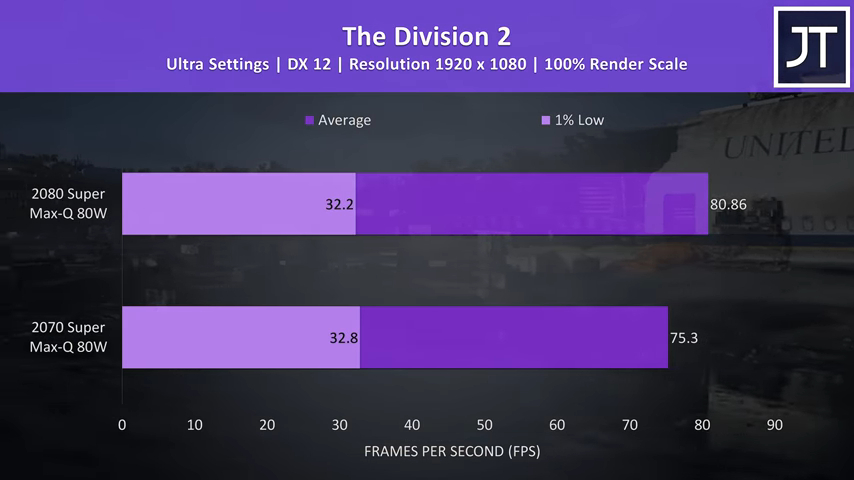 The Division 2 was tested with the games benchmark tool, very similar 1% low performance, but the 2080 was 7% faster for average FPS. 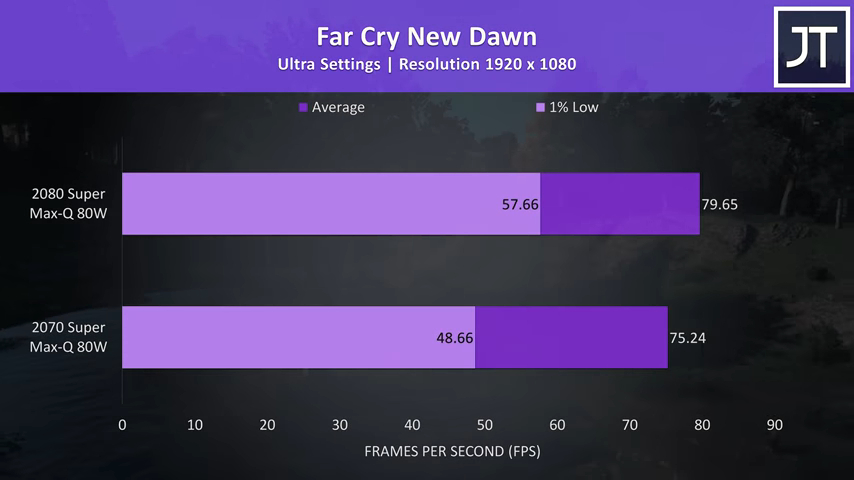 Far Cry New Dawn was also tested with the games benchmark, there was a below average 6% boost to average FPS with the 2080, but there was a much larger 18% boost to the 1% low. 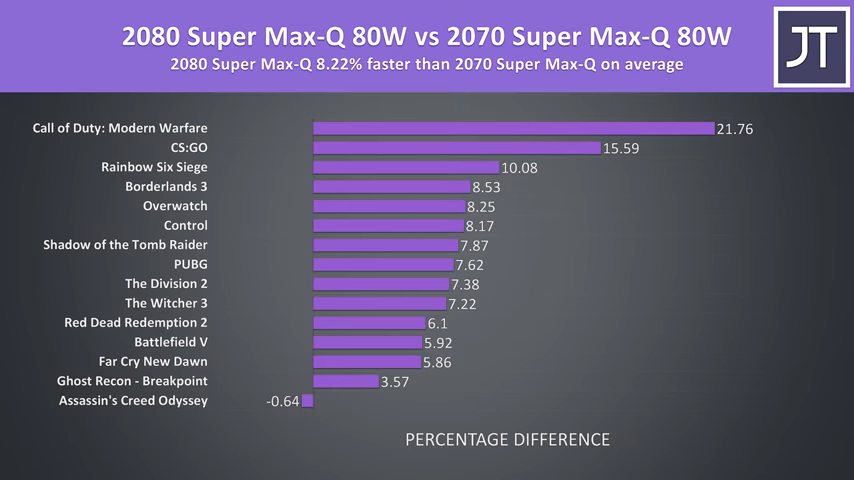 These are the differences in performance when looking at all 15 games tested. On average out of these titles the 2080 super max-q was 8% faster than the 2070 super max-q, at least when both have the same 80 watt limit. As you can see, the results really depend on the specific game. For instance there was basically no difference with Assassin’s Creed, but there was a huge difference in Call of Duty. 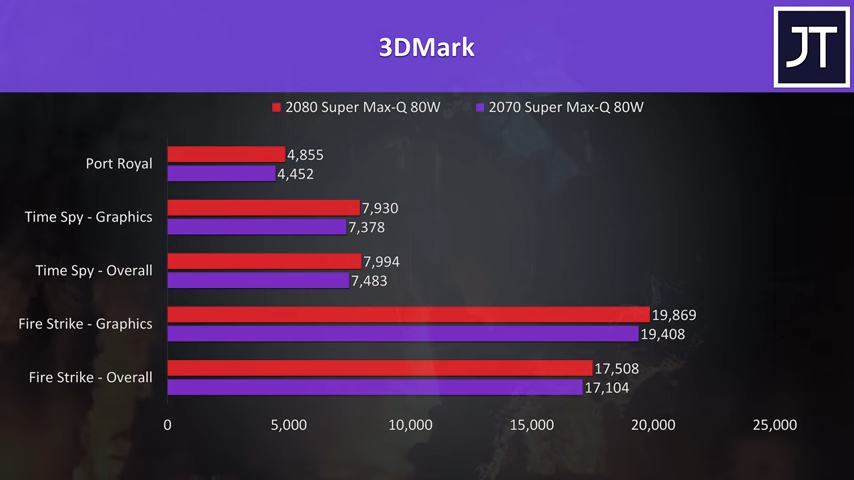 Here’s the difference we’re looking at with 3DMark. The performance differences were very close in this test, at least when compared to the games just shown, for example the 2080 had just a 2% higher Firestrike graphics score, a 7.5% higher Timespy graphics score, and a higher 9% score for the ray tracing Port Royal test.

I’ve measured total system power draw from the wall while running the Witcher 3 at maximum settings. 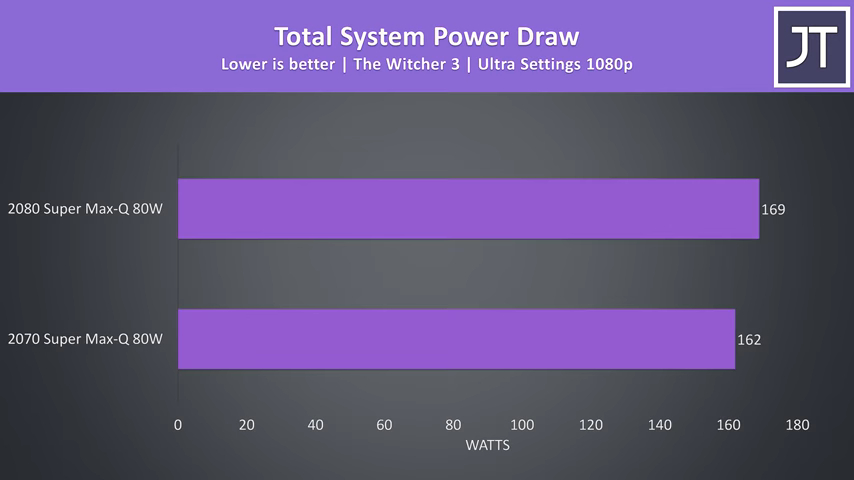 The 2080 was using 4% more power while delivering 7% more performance, at least while both GPUs are running with an 80 watt limit.

I’ve included temperatures because people would complain otherwise, however the MSI GS66 and Creator 17 I’m testing with have different cooling solutions.

With the same cooling I’d expect the 2080 to be a little warmer as it’s taking more power from the wall and performing better. 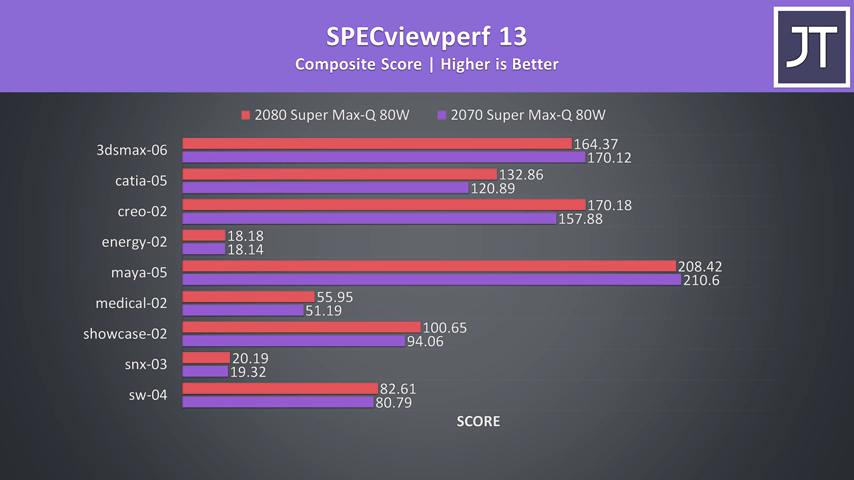 The results varied quite a bit here, the wins went either way depending on the specific workload, though the 2080 was ahead in most tests.

Again all testing here was done with 80 watt power limits, so better performance could be gained with 90w or even 100w variants. Unfortunately this isn’t advertised with new laptops, so the only way to find out what power limits laptops run at is to watch reviews like mine. As both laptops have different sized batteries it’s difficult to compare battery life, however given both will run off of optimus outside of gaming, there probably won’t be too big of a difference.

MSI GS66 can be pre-ordered for $2250 USD for the 2070 Super Max-Q, or $2700 USD for the same specs but with the 2080 Super Max-Q. This is 20% more money for on average 8% performance in games, there are definitely diminishing returns as you step up to higher options, for most people the 2070 is likely plenty, so you’ll need to decide if you want to pay more for less of a performance increase comparatively. I should also note that the GS66 will perform better than what I’ve shown here, by default in the best performance mode the GPU gets overclocked, I ran it here without an overclock as the Creator 17 doesn’t do this to keep things fair at stock.

Anyway I’m definitely interested to hear what you’d go for, if any of these, they are higher end options and in most cases more than most people would need. Let me know in the comments.