Alienware m15 R2 Thermal Testing - How Hot Is Too Hot? 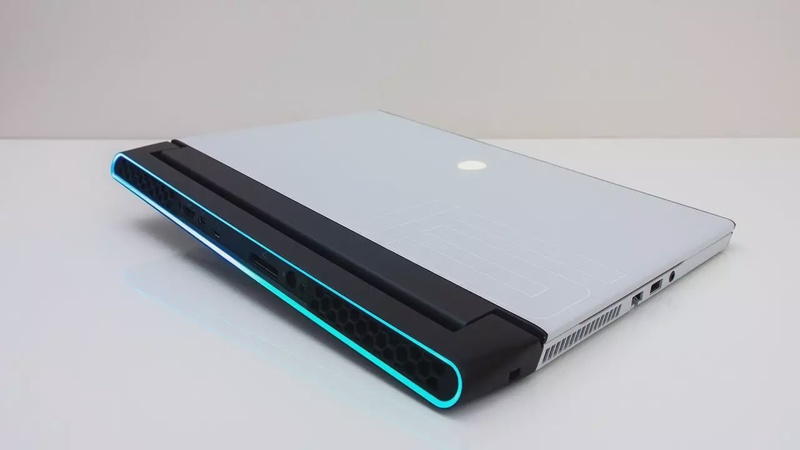 The Alienware m15 R2 is a thinner machine with some powerful hardware inside. So just how hot does it run and does this cause any problems? Let's find out and see what improvements can be made to thermals and performance.

The m15 R2 is available in different configurations, mine has an Intel i7 9750H processor Nvidia RTX 2080 Max-Q graphics and 16G of memory in dual channel, so expect different results with different specs.

and is exhausted out of the left and right sides towards the back and rear left in right corners.

There are a couple of fans inside with heat pipes shared between the CPU and GPU.

There are also a couple of overclocking modes 1 and 2 which overclock the GPU by these amounts. Thermals were tested with the 21 degrees Celsius ambient room temperature.

Idle results down the bottom were on the warmer side but no real issue with that. Worst-case stress tests were done with the aida64 CPU stress test with CPU only checked and the heaven benchmark at max settings at the same time. Gaming was tested with Watchdogs 2 as I find it to use a good combination of processor and graphics.

The CPU would run up to a hundred degrees Celsius, however I'm showing average temperatures here as it would throttled back down a bit once a hundred was hit, making 99 the highest reported average. No GPU thermal throttling was same during any of this testing. The lowest quiet mode was the coolest then cool mode was a little warmer. Balanced and performance modes were about the same then enabling full speed boosts the CPU power limit, so the CPU temperature rises as a result, though under bolting and using a cooling pad was able to help here granted more so in the game than the stress test.

These are the average clock speeds while running the same tests

We're able to hit the 4GHz or quarter by boost speed in the game by under vaulting while the stress test is almost capable of full speed when adding in the cooling pad. The GPU speeds don't change much while in distress test, however they progressively improve more when actually playing this game. The CPU clock speeds are basically the same in cooling quite modes then again it balanced and performance modes. This is because of the power limits. We can see cool and quiet cap the processor - 25 watts while balanced and performance seemed to run at 33.75 watts. Full speed mode sets PL1 to 80 watts, so basically thermal throttling will become the limit by design whereas we will power them at throttling prior to this. This explains the higher temperatures earlier.

The GPU wattage was interesting, despite running with a 90 watt limit in full speed mode it would actually boost to 100 watts in balanced and performance modes, which is why we have those mid 90 averages. I'm guessing because the processor has its power limit capped here more power is allowed to be assigned to the GPU instead.

Let's actually see how games perform with these different settings.

As this is a GPU heavy test and our GPU power limit is basically always fairly high regardless of setting mode we're still able to hit 80 FPS even with quiet mode, while under bolting in full performance mode got us a couple of extra frames. I thought the higher GPU power limit seen in performance mode might have given it an edge, but nope, full speed did better. Playing more CPU intensive games like Watchdogs 2 worked alright in quiet mode too. So gaming there was possible for both CPU and GPU demanding titles.

Let's take a look at a CPU early workload with the GPU idle. Here are the clock speeds while running Aida64 CPU stress test with all the default options checked.

So we could only hit the 4Ghz of core turbo speed with the underbolt in place. Thermal throttling was taking place in balanced mode and above.

However, the underbolt was able to reduce temperatures a little, and this is because less power was needed to hit full speed.

Here are some Cinebench results to give you an idea of CPU early performance when the GPU is idle.

The results when underbolted are actually very nice for this test. This is basically a best-case 9750H score, at least for multi-core, and that's because the 4Ghz core turbo was constantly being hit with the underbolt in place. It was running in the mid 90 degree range, but this is simply due to the high power limits that are possible in CPU early workloads.

As for the external temperatures, where you actually be putting your hands, at idle it was in the mid 30s in the center, but warmer up the back.

With the stress tests running in quiet mode it gets to around 50 in the center.

But that seems to be in between the keys as the keys themselves felt okay.

Cool mode didn't see too much difference. Balanced mode was also pretty similar and performance mode was, again, not too different.

Hitting the lower 50 in the middle. It's a little cooler with full speed owing to the higher fan speed.

At idle in quiet mode it was completely silent. There was some extremely subtle coil whine, but this wasn't noticeable once the fans were going. With the stress tests going in quiet mode it's still on the quieter side. Coal was a little louder, balanced and performance were a little louder still though about the same as each other. Full speed mode was strange, when you first enable it the fans spin up louder to about 58 decibels, which is quite loud, however it only lasts for a few seconds before spinning down to around 52 decibels, which is where it remained indefinitely. This is strange, because full speed isn't actually giving us full speed, while it does for the first few seconds then it slows down. Granted the slowed down speed is still faster than any other mode it can clearly go faster.

I tried making a custom fan profile in the Alienware command center software and set both to max speed, but I had the same issue is the full speed profile. Considering thermals can run hotter in this machine, due to the high power limits, it would have been good if we could actually utilize these faster fans if we want to. Considering that the m15 R2 is around 2 cm. thick and is paired with some pretty good specs, I don't think these results are too bad here. Yes, it can get hot, however this seems to be down to the higher power limits that are configured. Many other laptops will just cap the process of wattage to 45 watts and call it a day. However, in full speed mode the m15 is able to push beyond this. This means higher performance is available, but at the expense of thermals, it's a trade-off, but there is also the option of running a lower performance mode if you want to stay cooler. This is why we saw thermal throttling with temperatures up to a hundred degrees being hit, which is more than I'd be comfortable with long term, granted these are worst case tests and as we saw improvements could be made.

This behavior also seems to introduce inconsistent CPU performance. In CPU only workloads like Cinebench it was fine, but when combining CPU and GPU load together the CPU would throttle back a fair bit once it hit the hundred degree mark. I think this could explain the lower one percent lower result in Battlefield 5, although the average FPS is well up there, due to the 080 Max-Q GPU with good power limit the one percent low seems to suffer and is behind many other machines. Additionally, performance at lowest setting levels, where the CPU matters more, occasionally dipped back a bit, and I think this is a result of it backing down as the cap gets hit.

For example, once it hit a 100 degrees Celsius and a test it would drop back to 90 briefly then back to 95-98 and a 100. These are fairly big swings that will affect clock speed and thereby performance. So, faster band speed undervolting or using a cooling pad should help with that, and as we've seen using these techniques could give us fair improvements. These differences in performance showing aren't hard and fast rules. There are different factors which will vary results, primarily the temperature of the room you're running in, application of thermal paste and even the specific hardware, which comes down to the Silicon Lottery. You may not be able to overclock or undervolt as much as me, it depends on the chip and its specific power requirements, so you'll have to do some testing to find out what's best for your hardware. It may be possible to further improve temperatures by swapping the thermal paste. However, as this is a review unit that I have to send back I'm not able to change the paste, otherwise the next reviewer will unknowingly report different results due to what I've done.

Let me know what you thought about the thermals from the Alienware m15 R2 gaming laptop down in the comments.