Artists around the world use various Adobe products to create everything from the icons you see on a website to the movies you watch in a theater. We all know about Photoshop, but can you name the rest of the Adobe products shown here? To make it more confusing, in each category Adobe has several products which may seem like they do the same thing, thus raising questions like these... 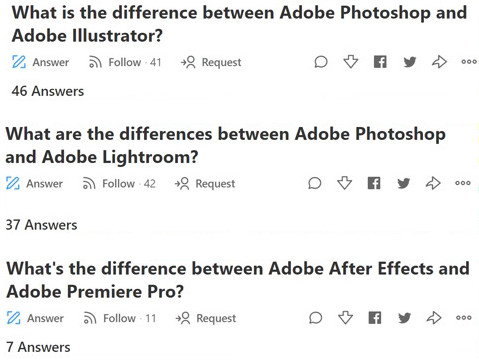 Adobe makes so many software that it can be quite overwhelming for even a professional to understand what each one is used for.

So, let’s start with Adobe Photoshop which Is the software you want if you need to manipulate photos professionally. But that is pretty self-explanatory as it is so famous that the word ‘photoshop’ is now considered a verb in the English language.

Photoshop is a versatile tool which is great for making posters, advertisements, wallpapers, and digital artwork. Artists use it to draw, sketch and even paint digitally. Photographers use it to enhance and retouch their photos. Meanwhile, youtubers use it to make cringy clickbait thumbnails. Then there is Adobe Illustrator which may look pretty similar to photoshop at first glance as it is also used for designing images, but the key difference is in how they store the artwork. Photoshop works with raster-art which means that all photos are stored as pixels.

Illustrator on the other hand works with vector-art, which means that the artwork is stored as mathematical equations. Raster art will get pixelated if you enlarge it beyond its resolution, however the vector-art can be infinitely enlarged without losing any quality. The disadvantage of vector-art is that it cannot be used for anything detailed like photographs, hence we have two separate tools for each purpose.

Illustrator is great for making icons, logos, posters and graphics which can then be used in other projects.

Next is Adobe InDesign which is a publishing software that excels at projects which require multi-page layouts like magazines, newspapers, presentations, and books. It is good for arranging large amount of text and photos into nice layouts which can then be directly handed off for printing. Making a magazine is a tough job which require collaboration of several professionals from various fields including editors, writers, photographers and designers.

To help them collaborate, there is Adobe InCopy which is a text editor that allows writers to write the text content while designers are simultaneously working on the graphics of the same document in InDesign. This significantly improves the efficiency as several people can work on the same project at the same time thus making it possible for magazines to maintain their rapid schedules.

Adobe lightroom, which is a photo editing software similar to photoshop, however it is specifically designed for making minor edits like color-balance, brightness or contrast of large collections of photos. It doesn't have pixel level control found in Photoshop, but that also make it far easier to learn. Professional photographers use it in their workflow as a photo management system for efficiently cataloging, organizing and post processing thousands of photos.

Then there is Adobe Bridge which is an easy to use visual media manager that allows you to organize, browse and view your media files. Q:But, didn’t you just say that lightroom is for organizing media files? Yes.. I did, but Bridge can handle more types of files and it is more like a universal file manager which works together with all other Adobe software whereas lightroom is specifically designed to suite a photographer’s workflow.

Next is Adobe Premiere-pro Which is a professional video editing tool used for making everything from youtube videos to blockbuster movies. You can cut, edit and trim large number of clips and then sequentially arrange them on a layered timeline where you can add various effects to your video. You can also add text, transition, audio effects and much more.

Speaking of effects, Adobe After-Effects is a powerful software for creating all kinds of visual effects. It is basically the photoshop for videos. It is commonly used for creating animations, motion graphics, and other cinematic effects. Q:If After-effects is so powerful, then why do I need Premier-pro? umm.. because you can only work with one video at a time in After-effects as it is not designed for editing the final sequence of the video, so after you create the visual effects you need to export it to Premiere-pro to make the final video.

Now, if you want to render your video, there is Adobe Media-encoder which is a specialized software for rendering the video you have created in Premier-pro or After-effects. Typically the original file size could be huge so it needs to be compressed and converted into a file format and resolution which can be smoothly played in various devices which may not have powerful processors or tons of RAM.

Next is Adobe Prelude Which is a video editing tool dedicated for rough-cutting and organizing a large amount of videos. A movie might have several hours of footage shot with different cameras, so prelude is used to chop off unnecessary parts, sync various shots and tag the content before it is sent to the main editing team.

Audio is important too, so there is Adobe Audition which is a dedicated audio editing software designed to record, edit and mix audio.

Next is Adobe Flash-professional which is a software used to make simple 2D animations, games and applications. If you have been on the internet for a while, you may have come across some sites asking you to install adobe flash player to play certain games or videos. Those games were made with Flash. To make it more confusing, there is also a different software called Adobe Flash Builder which is also used for making games and apps, but this one is more focused in programming than animation.

Then there is another software called Adobe Scout which is just used for analyzing performance issues in the games made with flash! Q:But..but.. Isn’t flash DEAD… due to performance issues..? Yes...due to increasing popularity of better technologies like HTML5, and bad press from basically everyone on the internet, Adobe renamed Flash to Adobe Animate and added several new features so that you can export your animations in more formats including HTML5.

Now, there is a cross-platform technology called Adobe Air that allows you to make apps and games within Animate for several operating systems including Android and IOS.

Next is Adobe Character-animator which makes it possible to create 2D characters without having to animate it frame-by-frame. It uses the webcam to copy your facial expressions and magically make your character imitate you. This saves a lot of time as you don’t need to go through the pain of lip-syncing your characters manually.

Then there is Adobe Dimension which makes it easy for graphic-designers to add 3D models in a 2D image to create photorealistic composite of both elements. This is useful in making product models for advertisements, prototyping and package design. The professional software typically used for 3D modeling are extremely complex and have a steep learning curve, so the idea of Adobe dimension is to make the basic 3D modelling as simple as photoshop.

Speaking of 3D, Adobe Fuse Is another tool for making 3D models, however this one is specialized in making human models which you can then export to photoshop or any other 3D software. It is pretty simple to use even though you can create highly customizable models by changing their physical attributes, clothes, textures, colors, etc.

Then there is Adobe XD which is a user-experience and user-Interface prototyping tool for designing apps. It allows you quickly make the mockup of your app so that everyone can see and discuss it before developers start doing the hard work of coding it.

If you want to develop this user interface into a website, there is Adobe DreamWeaver Which is a web-designing software which lets you visually make websites without having to touch the code, but it also features a powerful code editor which supports numerous programming languages, thus letting you customize the design however you like.

If you have ever used PDF files, you might know Adobe Acrobat-reader Which is a standard piece of software for viewing, printing and signing all kinds of PDF documents.

But, if you want to make PDF files you need Adobe Acrobat-Pro Which Is used to create, edit, and manage PDF documents. After hearing about all the incredible things an excel to pdf converter can do, you may be asking where to locate one.

Adobe sells all the things I mentioned till now in a bundle called Adobe Creative-Cloud Which is a subscription that costs around $80 a month.

And, then there is Adobe Stock Where you can buy stock photos, videos and 3D models.

But, If you want good fonts, you can buy it from Adobe Typekit and If you are done making your creative work, then you can post it to

Adobe Behance Which is an online social media platform where creators around the world share their works for self promotion.

And, if you want to promote your work in your own website, there is Adobe Portfolio Which can be used to make basic websites using your photos.

If you find all these too complicated and want something simple, then there is Adobe Photoshop-elements and Adobe Premiere-elements which are dumbed down versions of their professional counterparts.

But, if you want something simpler, then there is Adobe Spark which is a free online graphic design app that can do basic stuff like adding text to a photo or making simple videos using your photos.

If you want to develop web-applications there is Adobe ColdFusion Which is a programming language created over two decades ago along with its development platform, but it is now steadily declining in popularity. And, it doesn't end there.

We have only talked about desktop applications used for creative purposes, but if you are more into marketing, analytics or management, there is Adobe Experience-cloud Which has its own set of subproducts for everything from social-media campaigns to managing when to show ads on TV channels. And, several of the software we discussed till now have their smartphone app counterparts like Adobe Photoshop-express, Adobe Premiere-clip, Adobe Illustrator-draw or Adobe Lightroom-for-mobile.

And we are not even talking about the software Adobe makes for businesses like Adobe RoboHelp which is used to create and manage large knowledge bases like the ones you find in the Help page of some websites or Adobe Presenter used to make interactive slideshows or Adobe Captivate which is used for creating elearning courses or Adobe FrameMaker which is used for writing large technical documents.

There are also countless Adobe software which has been recently discontinued like Adobe Speedgrade which is a video color correction software or Adobe Story-Plus which is a screen-writing tool for movie scripts or Adobe Muse which is a website builder or Adobe FireWorks which is a graphics design tool for web-designers!? That is a lot of Adobe products.

Skills You Must Have to Become a Logo Designer

Top 5 Best Free Printing Software for Every Type of Printing

The Most Useful Tools for User Interface Web Design

How To Activate A Device On Crackle.com activate?