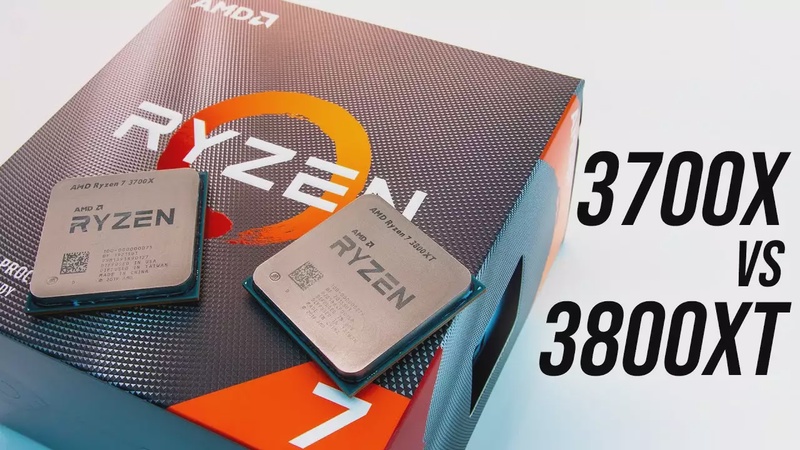 Is it worth paying more money to get the Ryzen 7 3800XT? Or can you spend less and get by with the cheaper 3700X instead? I’ve tested games, applications, power draw, thermals and more to show you the differences and help you decide if the 3800XT is worth the extra.

The specs of these two processors are basically the same, the main difference is when it comes to the base and maximum boost clock speeds.

The 3800XT is basically just a 3800X with higher clocks, and this is made possible due to improvements AMD have been able to introduce over the last year which result in reduced voltage and improved operating frequencies. AMD noted that with XT processors, bigger gains are expected to single core performance compared to multicore workloads, as the max clock speed will only be reached in lightly threaded workloads.

Both processors were tested in the same system, so same motherboard, 16GB of DDR4-3200 CL14 memory in dual channel, Nvidia RTX 2080 Ti graphics, and Fractal S36 AIO with the same thermal paste.

Although the 3700X and 3800X for that matter do come with stock coolers, the new 3800XT does not. All testing was done with the same Windows updates and Nvidia drivers installed. With that in mind we’ll start out with the application tests, followed by overclocked results, power draw, thermals, then gaming tests at 1080p and 1440p afterwards.

Starting with Cinebench R20, I’ve got the newer but more expensive 3800XT up top, and the older but cheaper 3700X below.

In this test the 3800XT was 4% faster when it came to multicore performance, however the single core score had a higher 6.5% boost.

I’ve also tested the older Cinebench R15 as a lot of people still use it, and the margins were quite similar, with again a larger improvement noted in single core performance, which makes sense and is expected as the max boost clock improvements are utilized here.

This is another threaded test, so the 3800XT was only around three to four percent faster than the 3700X in these tasks.

Adobe Premiere was used to export video at 4K, and the 3800XT was only 1.7% faster here, or about 40 seconds faster in a task that takes over 40 minutes to complete.

This tests more than just exporting such as live playback, and this test saw the smallest improvement on the 3800XT out of all applications I’ve looked at.

I’ve also tested the warp stabilizer effect in Adobe Premiere which is a less threaded workload and is used to smooth out a video clip, and the 3800XT was just 3.5% ahead, I thought it would see a bigger gain due to the higher max boost clock but it wasn’t too different.

Adobe Photoshop was another that was tested with the Puget Systems benchmark tool, and the 3800XT was only scoring a percent higher in this one.

7-Zip was used to test compression and decompression speeds, and the 3800XT was only around 2% faster when compared to the 3700X.

VeraCrypt was used to test AES encryption and decryption speeds, interestingly the 3700X was a little ahead in both cases, the 3800XT was actually scoring a little lower here, and it was consistent as I’m using the average of 10 runs.

The V-Ray benchmark uses the processor to render out a scene, and like most other core heavy workloads the difference was minimal, with the 3800XT scoring less than 3% higher.

The Corona benchmark also uses the processor to render out a scene, and the result was very close, with the 3800XT again about 3% faster than the 3700X.

In the Hardware Unboxed Microsoft Excel test the 3800XT was actually slightly slower, but it was extremely close, about a one percent difference, and given there is a little variance in this test between runs I’d say it’s margin of error.

Like other single core tests, the Geekbench single core score had one of the highest improvements out of all applications tested, with a 5% higher score on the 3800XT, while the multicore score saw a 2.5% improvement.

In most cases the 3800XT was ahead, and we can see that the single core tests are mostly towards the top of the graph, indicating that single core performance seems to have larger gains when compared to multicore performance with these new XT processors.

I’ve also done some tests with both processors overclocked. I was able to get my 3700X stable at 4.3GHz over all 8 cores at 1.375v, and using the same voltage on the 3800XT I was able to run it at 4.5GHz, the highest I’ve ever been able to get a Zen2 processor with minimal effort, so it would appear that the improvements they’ve incorporated over the last 12 months are helping there, but these were by no means finely tuned overclocks.

These are the results in Blender with the stock results at the bottom and overclocked results above.

The 3800XT overclock was allowing it to complete the task around 5% faster, while the 3700X’s overclock sped it up about 4%.

Cinebench illustrates some interesting behaviour, by manually overclocking in this manner and statically setting all cores to a speed, the all core boost speed becomes lower than the maximum single core speed at stock, so although multicore workloads see gains, single core performance is actually slower here, you’d probably be better just enabling PBO.

When we look at the total system power draw from the wall with the blender test running, the 3800XT was using more power to achieve this higher performance, and both needed about 6 watts more for the overclocks, despite the 3800XT being pushed further.

Higher power draw typically results in more heat, and for the 3800XT it was running a couple degrees warmer with the overclock in place, though interestingly my 3700X was actually a bit cooler while being overclocked and performing better, and this was because my manual voltage setting was better than what the motherboard was applying by default, but this will vary based on how you tune it.

These are the clock speeds that were being reached during these tests, so at stock the 3800XT was around 120MHz faster than the 3700X in a solid multicore workload, though the gap widened with the 3800XT’s superior overclock.

Shadow of the Tomb Raider was tested using the games benchmark tool. I’ve got the 1440p results above the 1080p results, and the 3800XT was just a couple of FPS ahead at either resolution, putting it around 2% faster.

Now that I’ve set your expectations appropriately, let’s look at Battlefield 5, the game that saw the biggest improvement from the 3800XT out of all 13 titles tested.

Assassin’s Creed Odyssey was tested with the games built in benchmark, and the 3800XT was around 3% faster in terms of average frame rate when compared to the 3700X at either resolution.

Call of Duty modern warfare was tested in campaign mode, and I’ve done the same test pass through the game with each processor. The results were very close, however the 3700X was slightly ahead in all cases, an interesting result but yeah just a few frames.

The Division 2 was tested using the games benchmark tool, and the gap was even smaller here, so not really much we can draw any meaningful conclusions from.

CS:GO was tested with the Ulletical FPS benchmark, and despite being a game that typically thrives with higher CPU clock speed, the 3800XT was only delivering frame rates around 1% faster than the 3700X.

Control is typically more GPU heavy, so it wasn’t much surprise that at high settings the two processors were offering essentially identical performance.

Red Dead Redemption 2 was tested using the games benchmark tool, and once more there was no real noteworthy difference between the two chips.

The Witcher 3 actually saw slightly lower performance with the 3800XT, similar to Call of Duty, not really sure why that was the case given the 3800XT should be pretty similar just with higher clock speeds.

Overwatch was tested in the practice range, while performing better than actual gameplay it allows me to perform the exact same test run. Anyway the results were similar to the last game, where the 3800XT was a little behind the 3700X.

Far Cry New Dawn was also tested with the games built in benchmark, and there was an above average difference here, even if it doesn’t look like it - the 3800XT was 3% faster at 1080p and 2% at 1440p.

Interestingly when we step up to 1440p the difference is actually less on average, as a few games seemed to do a little better on the 3700X here, either way though only small changes one way or the other.

If we instead look at the differences to 1% low performance, as this is typically where the processor is more sensitive, the 3800XT now had a 4% lead over the 3700X, though a lot of that would be down to the huge Battlefield 5 win.

When we look at the results in terms of dollar per frame values, the 3700X is offering far better value. This makes perfect sense, it’s over $100 cheaper but as we saw, in most of the games tested the frame rates were very similar.

If we instead look at the cost per frame values for the 1% low results, the margins don’t really change, the 3700X is still far better value owing to its price point.

Outside of gaming, as we saw, the 3800XT does perform better, but for 37% higher cost these results seem pretty difficult to justify to me.

You could of course make the argument of time is money, and you’re happy to pay more for more performance, but even that doesn’t hold up here as you can get the 12 core 3900X for just $30 more than the 3800XT, and if you’re doing multicore workloads like rendering then I’d expect that to offer better value.

So the 3800XT is a welcome addition given it comes in at the price point of the 3800X last year, but the improvements in that time aren’t really enough to make it worthwhile when the existing Ryzen processors that have already been out for a year now can be picked up for such great prices.

Personally at this point I’d probably just wait for Zen3, which is apparently on track for release this year in 2020, but otherwise if you are after an 8 core processor, the Ryzen 7 3700X looks like a better pick for most people when compared to the more expensive 3800XT. Let me know which CPU you’d pick and why down in the comments.

JT in Hardware
22 May

JT in Hardware
08 May

JT in Hardware
21 May