The Aorus FI27Q-P from Gigabyte offers some impressive specs for a gaming monitor, let’s find out if it’s worth it for the price in this monitor review. 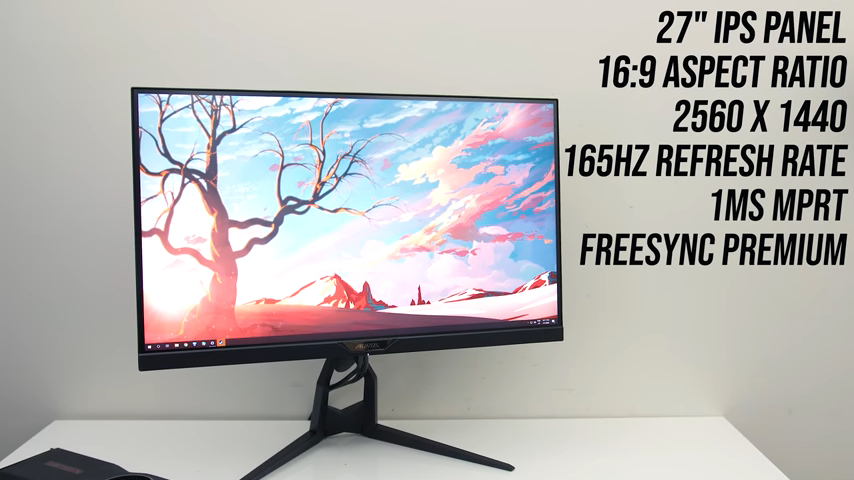 It’s got a 165Hz refresh rate and a 1ms response time, although that is MPRT rather than grey-to-grey. Combined with adaptive sync it’s got quite a few features for gaming.

In order to run the monitor at 1440p 165Hz you’ll need to use DisplayPort. I confirmed HDMI is limited to 144Hz, which makes sense as this is a limitation of the HDMI 2.0b specification.

I tested with both Nvidia and Radeon graphics, and found that my Nvidia RTX 2080 Ti would work with G-Sync compatible mode with DisplayPort, but not HDMI. My RX 5700 XT on the other hand worked with FreeSync with either DisplayPort or HDMI, but you might as well stick to DisplayPort to get the full 165Hz refresh rate. With DisplayPort in use, the FreeSync range was reported as 48Hz to 165Hz, and as it’s got FreeSync premium it’s also got low frame rate compensation. 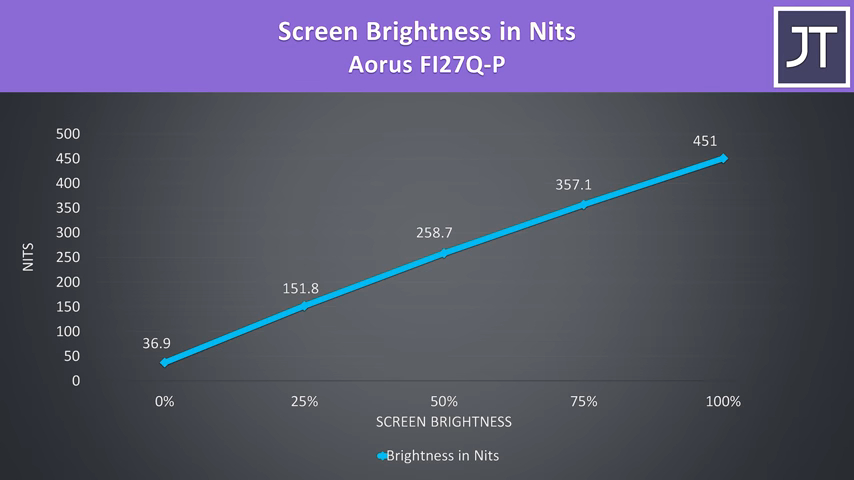 Gigabyte list it with a 350 nit brightness, however mine was a fair bit higher than this at 451 with 100% brightness. The contrast ratio is specified as 1000:1, however I measured mine at 830:1, granted this was with the default 50 out of 100 contrast setting, so you could tweak that.

The monitor gives you three response time settings in the overdrive menu, picture quality, balance and speed. I had a hard time telling a difference in the UFO test, but it was clearer when swapping between the lowest and highest mode, I thought speed looked the best.

The bezels aren’t too thick, I measured them at around 1 cm on the sides, but I honestly can’t say I really care too much as I hardly notice them once I get into a game, but that would be more of an issue if you have more than one side by side though. 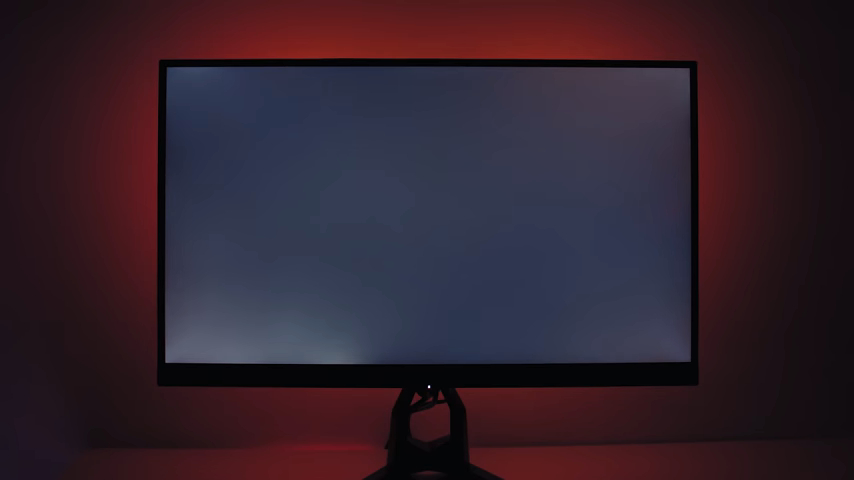 Backlight bleed looked fine, just a small glow patch detected by the camera in this worst case scenario, I couldn’t see it with my own eyes though, but this will vary between panels.

It’s not all just about the panel though, the stand feels solid as it’s metal with a matte black finish. 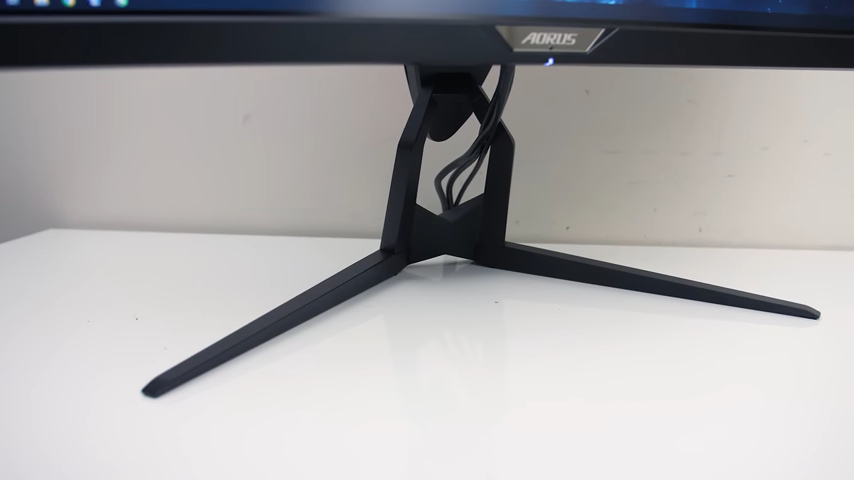 It felt sturdy and the design just gave it a premium feel. I liked the handle on top which made it easy to move around. There's a hole in the stand to help with cable management, along with an area to route them through at the bottom of the screen. 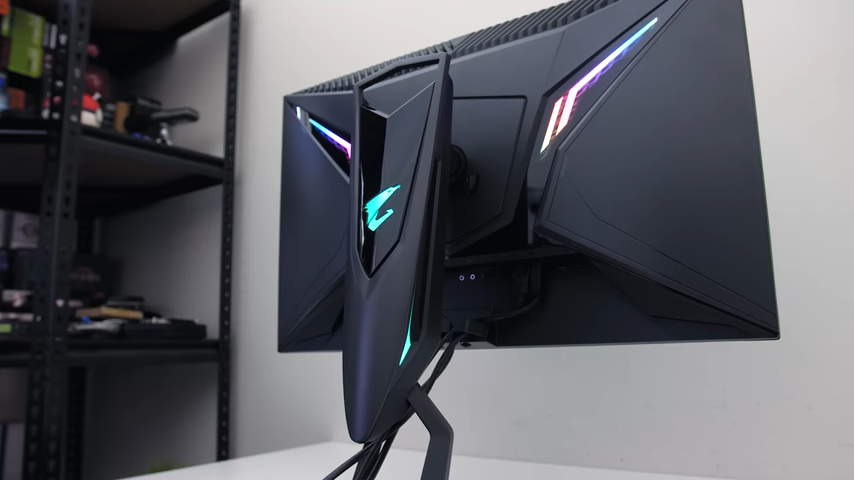 In terms of adjustments we’ve just got -5 to 21 degrees of up and down tilt, -20 to 20 degrees of side to side swivel, 0-13 cm of height adjustment up and down, and it can be pivoted 90 degrees, though it only turns in one direction rather than both.

The stand connects to the back of the panel without any tools required, and there’s a little pin connector here because the stand has RGB lighting and needs power. 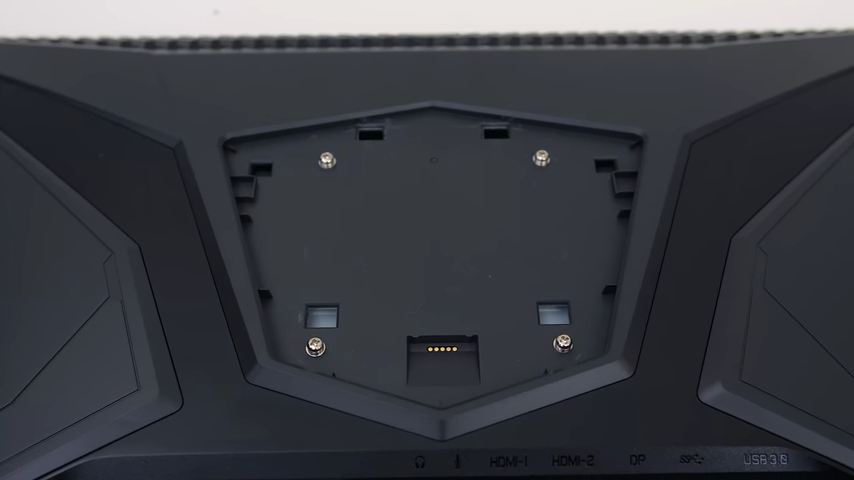 There’s also a 100 mm VESA mount if you want to attach the panel to a different stand or monitor arm. There’s a single joystick under the center of the screen for on screen display navigation, and this also acts as the power button. 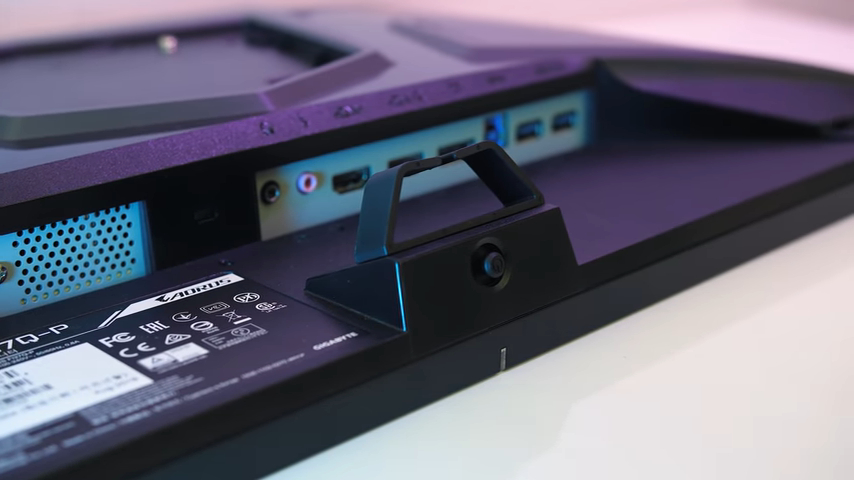 I didn’t have any issues using it, and found quite a few useful settings in the OSD, such as options for picture in picture, picture by picture, automatic power off timeout, disabling the front white LED, removing blue light, along with the usuals like brightness, contrast, and various preset profiles.

If you get the OSD Sidekick software from the Aorus website you can manage all this and more through Windows instead using your mouse, you just need to connect the included Type-B USB cable to your PC for it to work. 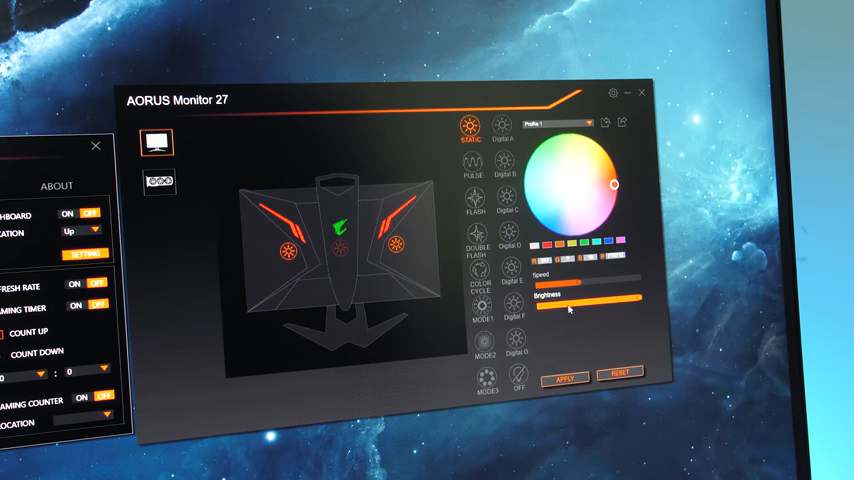 This also installs RGB fusion which is used to manage the RGB lighting on the back in two separate zones, the OSD just lets you select 3 modes or turn it off, while in the software we can customize colors and effects with more control.

The lighting was pretty subtle, even at night in a dark room I didn’t think it was too bright compared to others I’ve tested, I could barely pick it up on camera. As mentioned it’s not only on the back of the screen as these sorts of wings, but also on the stand as well. 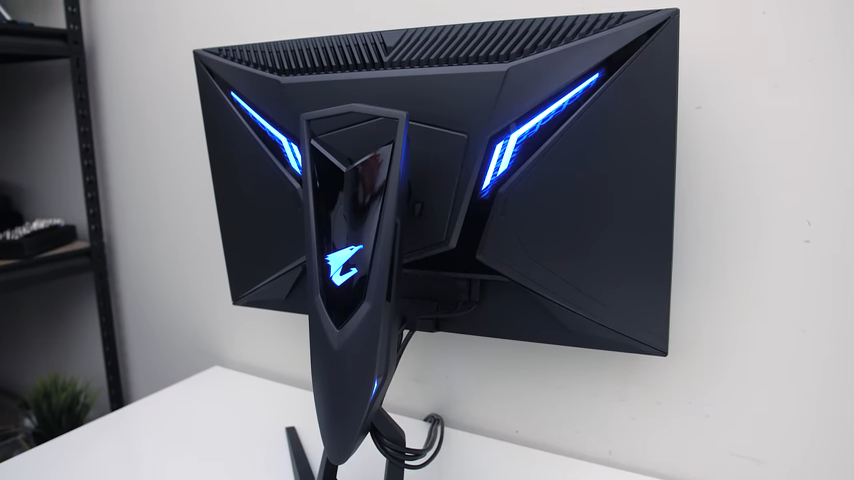 The I/O is on the back and faces down, there’s a power input on the far left, and no external power brick is needed as it’s built in. 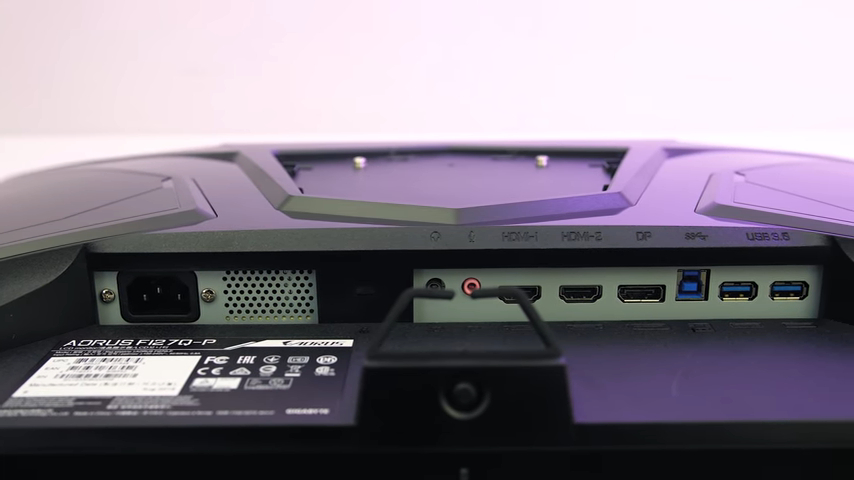 There’s a Kensington lock in the middle, then the rest of the I/O is towards the right, and includes 3.5 mm headphone and mic jacks with active noise cancellation, two HDMI 2.0 inputs, full size DisplayPort 1.4, and a USB Type-B port which is used to connect the monitor to your PC, and this allows you to use the other two USB Type-A ports as a USB hub. 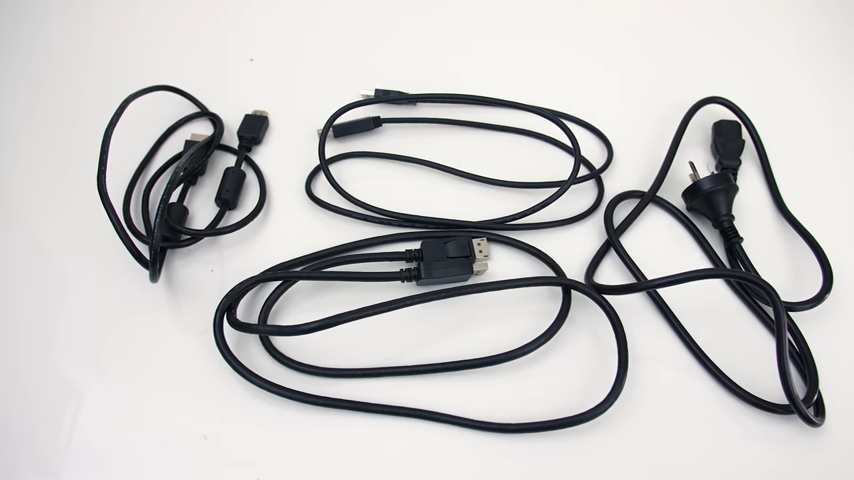 The cables included with the monitor are full size DisplayPort, HDMI, USB Type-B to A for the USB hub functionality and OSD Sidekick software, and a power cable.

So the monitor sounds pretty good overall, but how was it to actually use day to day? I normally use a 32” 4K monitor as my daily driver for video editing, so swapping to 27 inches (68.58 cm) at 1440p was a little downsize, granted this is the third 27” gaming monitor I’ve tested in the last few weeks. Overall I thought it looked great in terms of colors, I happily used it for some content creation without issues and thought games looked great. It was nice and bright with notably better response time and less ghosting compared to the VA panel in the MSI MAG272CQR I last tested, though that one is also a fair bit cheaper.

Finally, let’s discuss pricing. At the time of recording, the Aorus FI27Q-P goes for around $550 USD, or $50 less than the Viewsonic XG270QG that I recently tested. Honestly I couldn’t really tell you a difference between them while just playing games, the Viewsonic has better response time but I’m too much of a filthy casual to really notice. The color gamuts on both are similar, but the Aorus panel is brighter and had a better contrast ratio. The Viewsonic did have some extras like mouse anchors, headphone holder and optional side doors, those sorts of bonus features aren’t free.

Personally out of the two given I couldn’t really say one looked better to me over the other, I’d save the $50 and go for the Aorus, oh and here in Australia we’re looking at around $1000 AUD, or $200 less than the Viewsonic alternative. There are of course cheaper 1440p 165Hz monitors out there, this is definitely on the more premium side of the price scale.

So with all of that in mind, let me know what you thought of the Aorus FI27Q-P gaming monitor down in the comments.