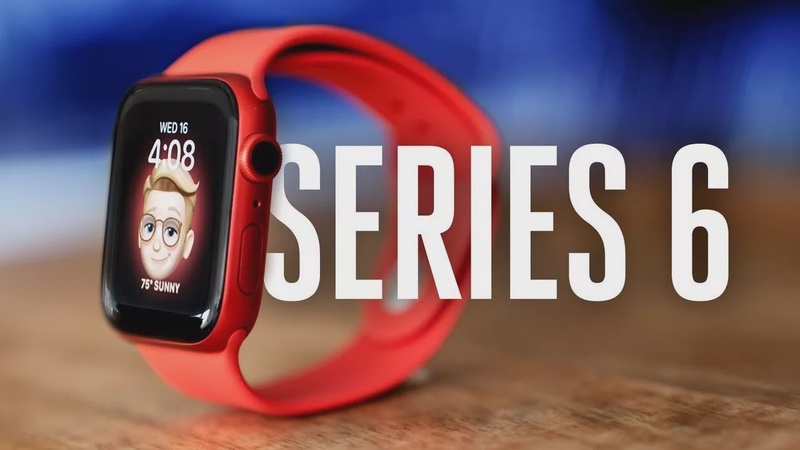 This week, Apple announced Apple Watch Series 6, and I've only had it for a little less than a day. So I'm just going to do a quick hands-on talk about some of the highlights of this new device.

The first thing to say is, "Holy, wow, this is a red, red watch." Apple has added some new color choices this year. So there's the usual gray, silver, and gold, but now there is blue and red.

You can also get it in the usual aluminum steel or titanium. The lower end ones have Ion-X glass on the front. The higher-end ones have Sapphire crystal and titanium.

Other than it being this really red, red color, it is identical to the Series 5 Apple Watch that I currently use. Same body, same size screen, but there are some subtle differences. So the first difference it's actually not so subtle. The screen brightness, this new Series 6 is 2.5 times brighter than the Series 5. So that's really nice, but it is not actually the premier feature of the Series 6. That would be its new blood oxygen monitor.

So if you look at the sensors on the back, there's way more of them on the Series 6, because it has a blood oxygen monitor. It works by shining a light in your arm and reading your blood oxygen.

To launch the blood oxygen thing, you open up the blood oxygen app, it also checks it in the background for you every now and then it also checks it while you sleep. So you can see that report, but you're supposed to rest your hand on a desk and not talk. Apple is not claiming that it's a medical device. You should not use it as a medical device. Your doctor might want information from this thing, but bottom line, this is not like an early COVID detection system. It's not going to help for that. You should not think of it as a medical device. Apple is doing studies that could lead to something, but they're not seeking FDA clearance. It's just if you like data, you can get more data.

Some other new features to talk about here. You may have noticed that my watch faces is the emoji, and they react when I tap on the watch and do stuff, which is kind of fun.

There are other new features in the Series 6. So in addition to oxygen monitoring, there's an always-on altimeter. So you can see how your altitude is. There's also a U1 chip, same as on the new iPhones. And that is for ultra-wideband stuff. Apple says someday you'll be able to use it to unlock a car, for example. But I think more likely what it's meant for is for the upcoming air tags that have been rumored forever, that haven't been announced yet. So you may be able to find your lost backpack with your watch.

There is, of course, still an ECG here. So, you know, you can check that if you want.

One thing that the Series 6 does not come with however, is a power adapter. It of course comes with the charger, the cable, and the USB thing that you plug into a USB port or a charger that you already have. But for the environment, they are not including the power adapter. And I agree with that decision. It's weird that it comes in the really expensive Hermes models or whatever, but good that they didn't put it in the base one.

The new processor system inside the Series 6 is the S6 System in Package, it's based on the A13 processor. And I don't know, just in a day of playing around with it, it seems fast, but you know what? The Series 5 seemed fast too. So that really isn't the main thing.

This watch has watchOS 7, which means that it does things like sleep tracking. It's going to have a fitness app. They're gonna rebrand workouts to fitness, and it's gonna work with fitness plus, so you can watch exercise videos. That's not coming till later on this year, another feature coming to watchOS 7. And I'm really curious to see if it's really popular or not. It's called Family Setup. It lets you set up the watch for a kid or a parent or something, even if they don't have an iPhone. And so it's part of your family, but it's not tied itself specifically to an iPhone. Which basically makes it like one of those kid GPS tracking watches. You can set geo-fences, you can set lists of who your kid is actually allowed to speak to with their watch. You could even set it so that it will only show certain things when they're at school. So not wasting all of their time on the watch, playing around with the emoji, which is a thing that I would do if I had a watch in school. You can also apparently make emoji directly on the watch, which is pretty exciting.

Basically, every Apple Watch has had its headline feature. So we'll start with Series 2, it had GPS and then Series 3 had LTE. And also actually its main feature was that it was the first really good Apple Watch. Series 4 had a bigger screen, the same size screen as you've got here, 44, 42 millimeters. The Series 5 had an always-on screen. And the Series 6 actually has a bunch of little things. So it has a brighter screen. It has a blood oxygen monitor. It has the always-on altimeter and it has the U1 chip. Do all those things add up to a must upgrade if you have a relatively recent Apple Watch. I kind of think the answer is probably going to be no, but that is a question for the full review.