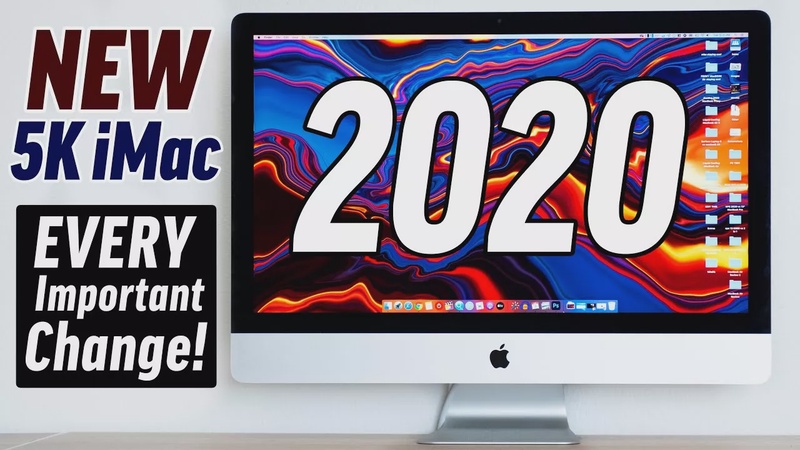 Today I am a very happy and excited man, because Apple, out of the blue, just updated their Intel-based iMacs, and there were a couple of things that we were really hoping for, so we already ordered two of these 5K iMac.

We ordered a $2300 8-core model and $3300 10-core model, both of them with only 8GB of RAM because we’re going to upgrade it ourselves to 64GB of RAM for only around $230 instead of $1000 from the Apple website! And yes, you can still upgrade it yourself, because if you look at this image from the new iMac listing page

it clearly shows the RAM door behind the stand. What makes me excited is that my predictions from my last iMac rumor video were almost completely correct, except for one feature that’s disappointingly missing on the 5K iMac. So what I’m going to do in this article is go through all of the changes and compare them to the previous models so you know exactly everything that changed and how much it actually matters. And PS, the iMac Pro got a tiny update, for the same base price, you now get the 10-core processor instead of the previous 8-core.

Getting into all of the changes, every single iMac including the 21.5” model now comes with an SSD at the base price, so no more hard drives! And that’s basically the only change for the 21.5” iMac, which is really weird because Apple basically always updates them at the same time. This shows that Apple is planning to replace that smaller iMac model with their Apple Silicon 24” iMac either later this year in October or they might wait until early 2021.

Now let’s get into the 27” 5K iMac, which starts at the same base price of $1799, except that we now get Intel’s latest 10th gen chips on every configuration!

And now, you can get up to a 3.6GHz 10-core i9 processor which is going to be insane! Previously, the best choice was an 8-core i9.

And based on Apple’s performance charts, this new CPU is much more powerful than the old 8-core! As far as the display, it’s basically staying unchanged except that you now have an option to pay for the nano-texture glass which Apple offered on their 6K Pro Display XDR, which basically turns it into a high-quality matte display without using a film that ruins colors and contrast.

You can now configure the RAM up to 128GB from Apple for a massive $2,600, but we do not recommend doing so because you can buy 4 sticks of that RAM and you’ll get 128GB for only around $464 instead of $2,600. You can now also configure up to a massive 8TB SSD, which is a huge difference coming from the previous maximum of 2TB.

There are three MAJOR features that matter the most to us, as video editors, and one of those is the new graphics. The previous 5K iMac came with the Radeon Pro 570X GPU, and the new one comes with the Radeon Pro 5300, which is based on AMDs new Navi-graphics architecture which has a number of advantages. The previous best GPU was the Vega 48, and you can now get up to a 5700 XT which is our favorite graphics card to use in a eGPU setup because it’s just so dang fast.

But this isn’t like any other 5700XT, this one is the only one that comes with 16GB of VRAM, which you can’t get on a PC. This is going to be a huge deal for anyone doing graphics rendering work. AND FINALLY, the new iMac now gets a 1080P FaceTime camera, which was only ever available on the iMac Pro.

Apple also added a new studio quality three-microphone array with new features compared to a basic microphone on the previous iMac! And the 2nd major feature that matters to us is the fact that the 5K iMac now FINALLY gets the T2 chip, which enables Hey Siri and a bunch of other features. This matters a lot to us because the MacBook Pro used to outperform a much more powerful 5K iMac in terms of HEVC video export speed simply because the iMac didn’t have a T2 chip which takes care of HEVC encoding and decoding, so this change alone is HUGE for video editors.

Another great feature is the fact that you can now hook up not one, but two 6K displays thanks to the new Navi graphics which support the latest version of Display Stream compression. The previous 5K iMac could only support one 5K display or two 4K displays. This is going to be a big deal for high-end editing studios.

As far as the ports, they’re basically staying the same except for two of them, the first being the SD card slot which now supports UHS-II speeds. The previous iMac limited transfer speed to around 100 MB/s, compared to the new SD card slot which supports speeds up to around 280 MB/s, so editors can now rejoice!

But the third MAJOR feature that matters the most to us is the fact that you now finally have an option to get a 10gb Ethernet port! We use a shared RAID server that requires 10gb Ethernet or Thunderbolt 3 to get the fastest transfer speeds for editing, and since we already used up the two Thunderbolt 3 ports, my Mac has to connect using 10gb Ethernet. That’s basically the only reason why I’m currently using an iMac Pro instead of a 5K iMac, and now that the new 5K iMac has a 10gb Ethernet option, we’re literally going to sell my iMac Pro and our editor  5K iMac and keep the two new 5K iMacs that we just ordered. Because I am 100% confident that the new $3300 5K iMac is going to destroy the $5000 iMac Pro in terms of performance, and we’ll actually be doing a comparison  before we sell it.

And now finally, I want to mention the one feature that I incorrectly predicted, and that’s Wi-Fi 6. Unfortunately, the new iMac still has Wi-Fi 5. Now to us, that’s not a big deal at all because we don’t have internet fast enough to really take advantage of Wi-Fi 6. But it’s definitely nice that the new 5K iMac now gets Bluetooth 5 instead of Bluetooth 4.2 on the previous models. And there you guys have it, that’s basically all of the features and changes, and I’m extremely excited because Apple gave us everything we asked for, and we know these new iMacs are gonna absolutely destroy performance-wise, and we’re definitely going to compare it to our $15,000 Mac Pro!