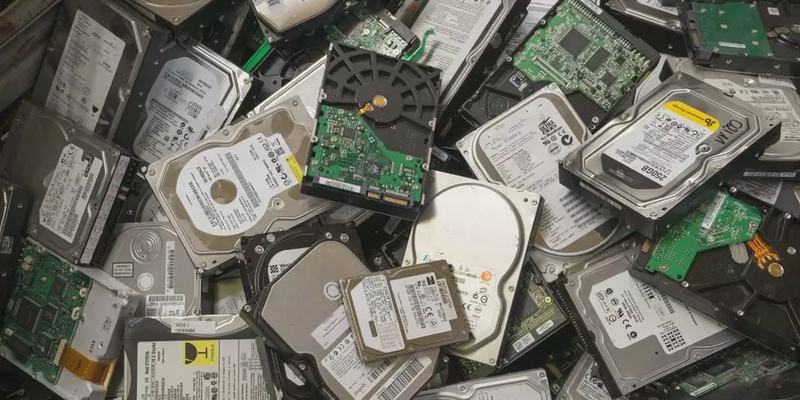 It's no secret that SSD's are slowly, but surely displacing hard drives in consumer PC and why not? They're faster, smaller lighter and less prone to failure when they're being thrown around. The only obstacle has been the price and even that is becoming less of an issue with one terabyte SSD, now under that magical 100 - dollar price barrier. So then given their woes is there a very real possibility that hard drives might disappear?

To answer that we reached out to our friends at Seagate, who designed both SSD and hard drives to provide us with some industry insight. Let's start by looking at what is driving SSD prices down. SSD manufacturers are getting better at packing more and more capacity into the NAND flash chips that actually store your data. The cells that the flash chips are divided used to be limited to a single bit per cell, but now can hold up to four bits each. And with upcoming Pental Level Cell or PLC technology, that number will increase to five, reducing the price that you pay per gigabyte.

However, at the same time, hard drive manufacturers are also working hard to increase aerial density, which is how much data can be crammed onto a hard disk platter. So thanks to technologies like Heat-Assisted Magnetic Recording or HAMR, manufacturers are pushing for even higher capacities with Seagate expecting a 30 terabyte drive next year and a 50 terabyte by 2026. So as awesome as SSD's are for speed, the continued research and development that goes into hard drives means that SSD won't be catching hard drives in terms of the cost per gigabyte anytime soon, and that continued affordability of hard drives is still more relevant than you might think.

A recent study from the International Data Corporation indicated that the amount of digital data worldwide will grow from 33 ZB in 2018 to a 175 ZB in 2025.

That is a five -fold increase in just seven years. In case you didn't know, zettabyte is a billion terabytes.

All that data has to go somewhere, and while some of it can be archived to tape if it needs to be accessible live from the Web tapes not really feasible because tape drives are so incredibly slow and it just isn't cost effective to put all of it on SSD, even among cloud storage providers who increasingly store more and more of the world's overall data, having 90% mechanical storage and 10 percent solid state storage remains a very common setup.

Take Facebook, for example, a highly access piece of content, like a viral video, might remain in solid state storage or even Ram as long as it's popular. But once a new fad takes over, it typically gets moved automatically to hard drive storage, then call back again, if it gains popularity. In this way, sites like Facebook, can keep their access times quick without breaking the Bank.

And then of course there's the endurance question. You see, the flash cells in an SSD eventually wear out once they've been overwritten a certain number of times and the SSD that store more bits per cell actually wear out more quickly.

So cheaper SSD won't last as long as enterprise grade ones that store fewer bits per cell.

That means that low-cost SSD need to be deployed selectively, and they are mostly used in situations where they don't have to be written to as much. A streaming video service, for example, may keep its frequently watched content on SSD, because it doesn't matter if a few hundred rights is going to kill that drive. If you're only refreshing your library on a quarterly or a monthly basis, and most of the drive activity is just from people watching movies.

There are solutions to these problems. Intel's obtained 3D CrossPoint solid state storage, both better endurance and performance that even the fastest NAN flash. But, it also comes at a cost per gigabyte that is greater than NAN flash. So it's not really a drop-in replacement for regular SSDs as much as it's like an additional tier of storage hardware to supplement flash SSD and of course hard drives.

So even though it's becoming less common to see hard drives in home computers, they still have plenty of applications that keep them in demand. So, whether you need extra space for your steam games in your gaming desktop low cost external drive to back up an SSD the only laptop or even a place to put 4K video footage from your hobbyist drone. There is still some need for affordable local storage. Bottom line then, I definitely don't expect the hard drive to go the way of the dodo anytime soon. They might just end up in places where you don't see them as often, unless you frequently pull late nights as sysadmin somewhere.

How to Plan a Homelab