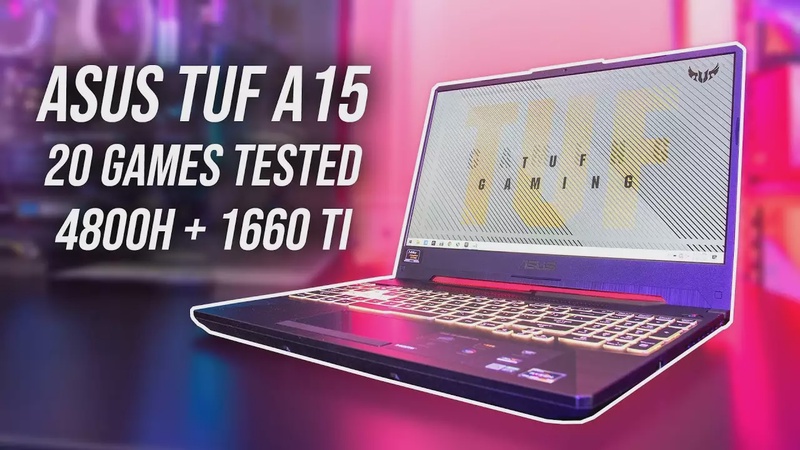 Let’s find out how the ASUS TUF A15 gaming laptop with AMD Ryzen 7 4800H and Nvidia GTX 1660 Ti performs in 20 different games at all setting levels. I’ll also compare it against some other laptops to help you decide if it’s worth it.

We’re looking at the FA506IU model here, so these are the specs we’re dealing with

The ASUS Armoury Crate software lets you select between different performance modes. I’ve done all testing with turbo mode enabled for best performance, and this raises the fan speed and applies the following overclock to the GPU. We’ll only be covering gaming performance in this article, so look out for the upcoming full review.

Let’s start out by going through all games at all setting levels, then afterwards we’ll see how this gaming laptop compares with some other laptops.

Red Dead Redemption 2 was tested using the game’s built in benchmark tool. As we’ve got 6gb of VRAM we can at least run ultra settings, something the 1650 Ti config isn’t able to do, granted the frame rate isn’t great, but high settings wasn’t far below 60 FPS.

Battlefield 5 was tested in campaign mode, and ultra settings was able to average above 60 FPS, but we’ll look at how this game compares with some other laptops soon.

Control was only seeing above 60 FPS with the medium setting preset, and based on my time playing I thought this mode was a good sweet spot, high would drop a bit during fights and I don’t think it benefits much from the 100 FPS at low settings.

Shadow of the Tomb Raider was tested with the built-in benchmark. I recall the 1650 Ti version of the A15 needed medium settings to hit 60 FPS here, so looks like the 1660 Ti is a fair bit better, but we’ll compare this game with other laptops a bit later.

Apex Legends was tested with either all settings at maximum, or all settings on the lowest possible values, as it doesn’t have predefined setting presets. It played fine for me at max settings with still above 100 FPS, however it was possible to get big gains with minimum settings.

Call of Duty Modern Warfare was tested in campaign mode, and I’ve also tested it with the settings either maxed out or at minimum. There wasn’t as big of a jump going to minimum in this one, and I thought it was still playing well enough maxed out.

Borderlands 3 was tested using the game’s built in benchmark, and high settings was needed to hit 60 FPS, going above this started to result in lower performance, though we could also hit 100 with the very low preset.

Ghost Recon Breakpoint was also tested with the benchmark tool. The 1% lows were a bit inconsistent, though not too different between setting levels at the end of the day. Ultra settings was still able to reach 60 FPS averages which seems reasonable for a laptop.

Fortnite was tested with the replay feature, and as a less demanding title it was still running quite well with the highest epic setting preset, however high would be a much better option to make use of the 144Hz display, but as you’ll see in the response time testing later it’s got other issues there.

Overwatch is another less demanding game and was tested in the practice range, and like ghost recon the 1% low was a bit all over, not that it really matters given the high frame rates that are possible even at max settings.

CS:GO was tested using the Ulletical FPS benchmark, and it was doing fine, similar to some of the other Ryzen 4000 gaming laptops I’ve recently tested, it seems that Intel mobile processors may have an edge here, the Helios 300 for instance with same GPU hits 320 FPS at low.

Dota 2 was tested playing in the middle lane, and again is another where the frame rates are a bit lower with this Ryzen based laptop, though given we’re still hitting 140 FPS with the highest settings I don’t think this is going to be an issue for most people.

Rainbow Six Siege was tested with the built in benchmark using Vulkan, and again still quite good results were obtained even with the highest ultra setting preset, which in this case was still above 100 FPS.

The Division 2 was also tested with the built in benchmark, and ultra settings were right around the 60 FPS point, however we could double this frame rate with low settings should a higher frame rate be prefered.

Monster Hunter world was tested running through the main town, and the 1% low performance wasn’t far behind the averages which seems typical with this game from what I’ve seen so far, which should mean fewer dips in performance.

Assassin’s Creed Odyssey was tested with the built in benchmark, and I don’t think this one needs a super high frame rate to play, so no real issue with medium settings being required to reach 60 FPS here.

Far Cry New Dawn was also tested with the games benchmark, there’s not really much to say, still able to reach above 60 FPS even with the ultra setting preset.

The Witcher 3 was playing fine at max settings, however as is pretty much always the case with this one, we can get a fair performance boost without losing too much eye candy with high settings.

F1 2019 was tested using the game’s benchmark tool, and like the last game it seems a similar result where going down one setting level from max offers a nice boost, though 100 FPS at max settings should still do nicely.

Let’s also take a look at how this configuration of the ASUS TUF A15 gaming laptop compares with other laptops, use these results as a rough guide only as they were tested at different times with different drivers.

In Battlefield 5 I’ve got the A15 highlighted in red.

The results seem fair in terms of average frame rate, however the 1% low performance was notably worse when compared to say the Lenovo Y540 or Acer Helios 300 with the same GTX 1660 Ti GPU but with Intel i7 CPU. The Helios is undervolted and the Y540 was tested with Optimus disabled though, and these things give them an edge, regardless though the A15 is having more dips in performance despite the average frame rate looking decent.

This time the 1% low performance is more in line with the other 1660 Ti laptops tested. The average frame rate is a little behind the majority of Intel based options, though in most cases it’s not far behind.

As the 1660 Ti is still a great mid range option for gaming laptops, the performance of this A15 with it is decent, it’s able to play pretty much any game at 1080p even with higher setting levels. I found it interesting that in some titles at lower settings, the lower specced A15 with Ryzen 5 4600H and GTX 1650 Ti graphics was actually performing a bit better.

It makes sense when you think about it though, under stress tests and while gaming I found the 4600H to clock higher as it’s got less cores so the available power can be put towards higher clock speeds.

In games that aren’t core heavy this would see it do better at lower setting levels, though of course in most games once we even get to medium or above it’s no longer ahead, as the 1660 Ti is able to perform significantly better. While testing these 20 games out, I honestly cannot say I had any issues with the panel, but I don’t think I’m personally that sensitive to the slower response times, which is why I recently invested in the tools needed to measure response time.

So far the A15 has the slowest laptop panel I’ve ever tested by a fair amount. You can check the link in the description for an explanation on what all of these numbers mean, but the key takeaway is on average the grey-to-grey response time is about 22.5ms, meaning the fact that it’s 144Hz doesn’t actually mean that much and seems to be more used for marketing purposes. Let me know what you thought of the gaming performance from the 1660 Ti configuration down in the comments.