Can Memory DAMAGE Your CPU? 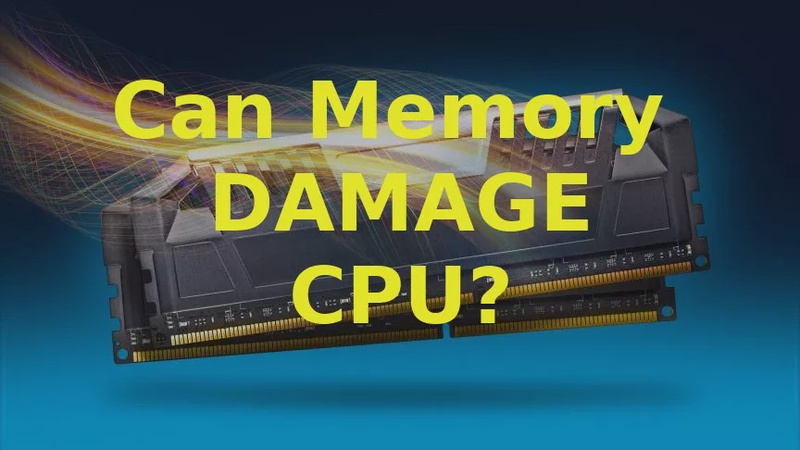 If you buy something, you want it to fulfill its proper function, whether that's cleaning your toilet, mowing your lawn, or giving you a dining experience, similar to what's indicated by the picture on the menu. If you've ever bought memory for your computer, you might be slightly incensed to discover that it doesn't run at the speed indicated on the packaging.

But don't worry, your RAM isn't to blame. This happens because motherboards will often default to running the RAM at a frequency approved by JEDEC (joint electron device engineering council), which sets standards for memory speeds. After building a new PC or upgrading your previous one, you should go into your BIOS, and see what speed your memory has defaulted to. From there, you can change your speeds and timings manually to match what's on the packaging, or do what many folks do, and simply use a preloaded XMP profile.

If you're not familiar with it, an XMP profile allows you to quickly select a predetermined setting on your motherboard that matches the speed that's advertised on your RAM sticks.

But hold on a minute! There have been reports that AMD and Intel can void your processor warranty for using an XMP profile. And I'd just like to ask, why? Because you're using a feature that's one, supported by your motherboard. Two, is focused on your RAM, not your CPU. Three, gets your RAM to run at the speed the manufacturer says it will. And four, was designed by Intel in the first place.

So here's what's up. Each CPU is rated to operate with memory running up to a certain speed. And if you're not sure what that speed is, you can easily find out through the CPU product page, if you're using an AMD chip and on Intel's arc database, if you've got something from team blue.

XMP can be used to bump up your memory speed to match that number, if your motherboard defaulted the RAM to a lower speed. But where things get a little dicey from a warranty perspective is if you exceed that number. Even if the memory kit itself is rated for a higher speed. You see, although XMP does involve speeding up your memory, your RAM still has to talk to your CPU through the CPU's built-in memory controller.

Even if you're running your RAM at the speed that it says on the box, or on the sticker on the RAM stick itself, Intel and AMD still consider it as running your processor out of spec, just as if you overclocked your CPU. Therefore, some people have reported that the processor manufacturers have refused to honor warranties if users send them diagnostic data that indicates the running memory at speeds beyond what's listed on the CPU's product page. Of course, this doesn't sit well with many users, given that Intel actively advertises both XMP and processor overclocking, and then turns around and denies warranty coverage, come on!

AMD and Intel, at least in most places in the U.S., are legally allowed to use disclaimers about how overclocking will void the warranty, even if they advertise overclocking capabilities. Weird, but should all this dissuade you from running your memory at a speed faster than the man wants you to? The answer is probably not. As long as you're not putting tons of extra voltage through your RAM. In fact, AMD's new Ryzen series seems to benefit a fair amount from faster RAM. So, definitely consider turning up the speed a bit, if you're rocking a team red CPU.

And of course you could always just not tell AMD or Intel that you overclocked your memory, if you ever need their support.