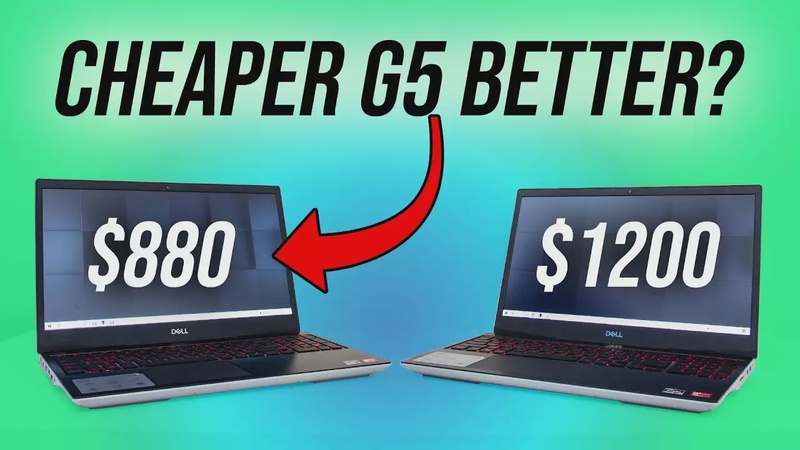 and found that the cheaper 4600H model was running hotter with both the CPU and GPU active, and this was despite both machines having the same internals and cooling solution.

Although the lower specced model was running hotter under stress test, it was also able to hit higher clock speeds.

This made sense to me, the G5 uses AMD’s SmartShift, and as the Ryzen 5 4600H has fewer cores it needs less power to run, resulting in the 4600H clocking higher. Given most current games won’t care about the jump from 6 to 8 cores, the higher speeds with the 4600H may give it an edge in gaming. Additionally, the 4600H using less power means that more power can be shifted over to the 5600M graphics, and I’ve been able to confirm this behaviour with AMD. Here’s an example of what it looks like to run the Aida64 CPU stress test and Heaven GPU benchmark at the same time.

I’ve got the cheaper 4600H system on the left and more expensive 4800H system on the right. The left machine is reaching higher frame rates and higher GPU power, and this also comes at the expense of higher temperatures.

Many games are more GPU bound at higher setting levels, so let’s get into some game benchmarks and see what difference this actually means in practice. Please note this is not a regular 4600H and 4800H comparison, all results here are specific to the G5 SE with SmartShift only. Laptops with Nvidia graphics would have a set power budget and should not see this behaviour.

Shadow of the Tomb Raider was tested with the games benchmark tool.

Control was tested running through the same section of the game on both laptops.

Red Dead Redemption 2 was tested with the games benchmark tool, and saw the biggest difference between the two laptops at the highest setting level, where the 4600H was able to score a massive 47% higher average frame rate, while the 4800H was ahead at low and medium settings, presumably as the test is more CPU focussed there.

Battlefield 5 was tested in campaign mode with the same part of the game used on each laptop.

Although the 4600H had slightly higher averages at high and ultra, the 1% low was still behind the 4800H, either way not that much difference in practice that I think you’d be able to notice.

Apex Legends was tested running through the same part of the World’s Edge Map, regardless of having all settings set to minimum or maximum, the 4600H laptop was beating the 4800H, though the gap was wider at max settings.

Call of Duty Modern Warfare was also tested with either minimum or maximum settings in campaign mode.

Again the 4600H laptop was ahead in average FPS regardless of setting level, though the difference was closer together at max settings this time, perhaps indicating the higher clock speeds from the 4600H at lower settings may be more useful in this test.

Borderlands 3 was tested with the games benchmark tool.

The 4600H had the lead between high and max settings, while the 4800H was winning at the lower levels.

This time the 4800H laptop was ahead in all cases regardless of the setting preset used, which makes sense to me as this is a test I’ve noticed to be more processor intensive in the past. At low settings the 4800H had the biggest gain over the 4600H out of all 21 games tested with a 28% higher frame rate.

CS:GO was tested with the Ulletical FPS benchmark, and is another that is typically more processor dependent, and the 4800H was doing better regardless of setting level.

Dota 2 saw similar behaviour, with the 4800H ahead regardless of the settings used, so results can really vary by game and what resources it needs to run.

F1 2019 was tested with the games benchmark tool, like many others tested earlier the 4800H was ahead at all but max setting levels. Well technically it was ahead there too, but it’s so close I’m going to call that one a draw as the difference is within margin of error.

Fortnite was tested with the replay feature using the exact same replay on each laptop.

The 4800H G5 was ahead in average frame rate at all but the highest setting preset, though the 4800H still had an edge in 1% low performance, but this seems to vary anyway as the 4600H had better 1% lows at high and medium.

The Witcher 3 was tested running through the same part of the game, and the results were very close regardless of settings used, though at ultra the 4600H appeared to have a slight edge, granted not one you’d be likely to notice in practice.

Rainbow Six Siege was tested with the games built in benchmark.

Again the results were fairly close at all setting levels, however at ultra the 4600H was almost 5% higher in average frame rate.

Ghost Recon Breakpoint was tested in the same manner, and the 4600H was also slightly in front at ultra settings here too, however the 4800H has a bigger lead at lower setting levels, both for 1% low and average FPS.

Monster Hunter World was tested running through the main town area, and there was a similar pattern to many other games covered where the 4600H could reach higher averages at the highest setting level.

Metro Exodus was tested with the games benchmark tool, the frame rates were very close together at most levels, though the 4800H had a clear win at low, though only with a 6% higher average FPS.

Overwatch was tested in the practice range as this lets me perform the exact same test run. The 4600H was able to claim the lead both in 1% low and average frame rate with the ultra and epic setting presets.

DOOM Eternal wasn’t able to run at the higher setting levels as you need more than 6GB of VRAM, in any case the 4600H seemed to be ahead in most cases than not.

The Division 2 was tested with the games benchmark tool, once more like most others, the 4600H was ahead at ultra settings with an 11% higher average FPS, while the 4800H saw a larger 19% boost at low settings.

These are the differences when we look at all 21 games tested at maximum settings.

On average, the more expensive configuration of G5 with Ryzen 7 4800H and double the RAM was 2% slower when compared to the entry level G5 which is $320 USD cheaper. For many games the difference was minor, though there were some large outliers like Red Dead Redemption 2.

When we instead look at the difference between minimum setting levels

So at the end of the day, the cheaper G5 with 4600H processor is able to outperform the $320 more expensive model in most games at max settings with double the RAM and 8 core 4800H processor. This is mainly because of SmartShift allowing the 5600M to use more power and perform better, as most games at the highest setting preset are more GPU heavy than CPU.

To be fair though, in many games you may not be running at maximum, so the 4800H configuration will do better in most scenarios in most games, as we’ve seen it will vary based on the setting level in use, but still there’s not that big of a difference either way. I have found the 5600M close to the 1660 Ti in performance however, so in many games it is certainly capable of playing at max settings. In any case, this was an interesting edge case and effect of SmartShift to investigate.

Of course outside of gaming the 4800H offers significantly more multicore performance due to the extra core count, so if you’re gaming on the side and using other applications then the 4800H will still give you some nice improvements. Otherwise it looks like the entry level G5 is still going to offer a great gaming experience for less money. Anyway let me know what you thought of the performance differences between the two Dell G5 laptops down in the comments.