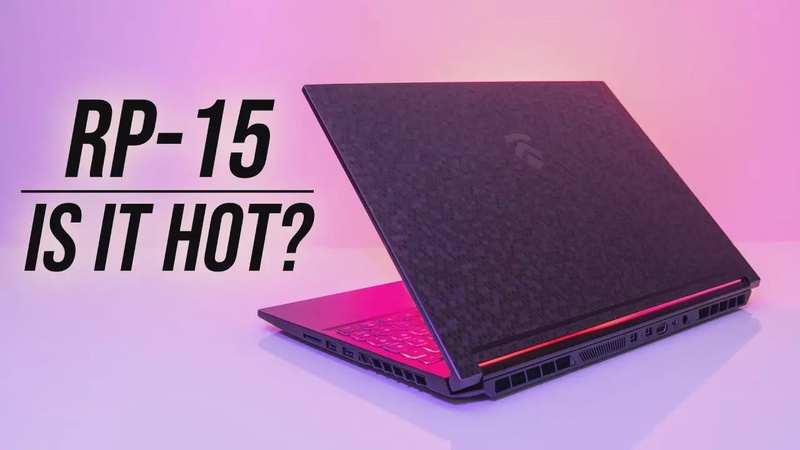 The Eluktronics RP-15 might just be the coolest Ryzen based gaming laptop I’ve tested so far, let’s find out what level of performance is on offer and see how hot it runs.

These are the specs we’re looking at

Air comes in through the large vents underneath which are positioned above the fans, it then gets exhausted out of the left and right sides towards the back, as well as from the back corners.

There are a couple of fans inside with two heatpipes shared between the CPU and GPU, but it also looks like we’ve got some VRM coverage.

The gaming center software lets you select between different performance modes, which from lowest to highest are office mode, game mode and turbo mode. In office mode you can also toggle standard or ECO which lowers the CPU power limit, while game and turbo modes have a fan boost button to set the fans to max speed. Turbo mode also enables Eluktroboost, which should get the RTX 2060 boosting up to 110 watts. Software doesn’t report the boost from 90 to 110 watts on the GPU when you enable turbo mode, but by monitoring the power draw from the wall it was possible to see the difference, plus the GPU gets hotter too as a result of the increased power.

Idle results down the bottom were a bit warm, but no problem there. Worst case stress tests were done with the Aida64 CPU stress test with CPU only checked and the Heaven benchmark at max settings at the same time, while gaming was tested with Watch Dogs 2 as I find it to use a good combination of processor and graphics.

Office mode with ECO enabled was the coolest, changing from ECO to standard increases the temperatures as fan noise stays the same but power limits increase, so better performance at the expense of more heat, but still not really hot yet.

In game mode the CPU gets hotter due to further increase to the power limit, but the GPU gets a bit cooler as a result of the increased fan speed.

In turbo mode the GPU was actually thermal throttling at 86 degrees Celsius, whether under stress test or while gaming, as a reminder this is the eluktroboost mode. It was possible to lower the temperatures by around 15 degrees on the CPU by limiting the processor to base clock speed, or we could instead use a cooling pad, which helped nicely too thanks to the large vents underneath.

The GPU clock speed only really changes once we enable turbo mode, as this boosts the max power limit of the 2060 up to 110 watts. The CPU was otherwise hitting 4.0 to 4.1GHz on all 8 cores at stock in game or turbo modes, a good result. Of course capping to base clock limits this to 2.9GHz, which was only a little below using ECO mode.

You’re going to have to take the GPU power values here with a grain of salt, as hardware info does not report the boosting to 110 watts in turbo mode, interestingly the GPU power is reporting as lower than 90 watts in turbo mode as it was apparently thermal throttling at 86 degrees as we saw earlier, but again not too sure on the accuracy of the GPU results. Office mode with ECO enabled caps the processor to 25 watts, standard mode seems to let it run around 40 watts or so, then in turbo mode we’re able to get up to 50, so much more compared to the 36 watts I saw best case with the ASUS TUF A15, while also running cooler.

This test tends to be more GPU heavy, and the difference isn’t that big between the different levels. Even with the lowest office mode with ECO we’re still reaching above 70 FPS, and turbo gave the biggest boost, presumably due to the extra GPU power with eluktroboost.

In a CPU only stress test with the GPU now idle, we’re able to reach much higher power levels on the processor, these are the highest power levels for a 4800H I’ve seen so far, for brief comparison the TUF A15 topped out at 47 watts in the same test.

The temperatures are only a couple of degrees hotter than the TUF in this test too, and by either limiting the CPU power in ECO mode or by capping the base clock speed we could bring the temperatures lower, though this of course comes at the expense of lower clock speeds.

We’re pretty much able to get 4.1GHz on all 8 cores in this stress test, again for comparison the A15 got to 3.8GHz in this same test.

it looks like ECO mode makes more sense than limiting to base clock, not only are the fans quieter, but ECO mode doesn’t sacrifice single core performance.

When we compare the RP-15 to other laptops we can see just how much of an advantage these higher power limits are giving it. It’s scoring around 10% higher in the multicore score over all other Ryzen 7 4800H machines that I’ve tested, only being beaten by far thicker and much more expensive machines, a seriously impressive result.

As for the external temperatures where you’ll actually be putting your hands, at idle in office plus ECO mode it’s on the warmer side, most laptops are 30 degrees in this test, but even so it barely felt warm.

then in turbo mode it’s pretty similar, warm in the middle but not hot and cool wrist rests.

It sounded silent at idle, I just have a high noise floor. The fan is audible when just browsing in Chrome. Stress tests in standard mode were the same regardless of whether ECO or standard modes were selected, then game and turbo modes are the same and maxed out in these particular tests. I didn’t need to test game and turbo modes separately with fan boost enabled and disabled, as I found them to reach maximum fan speed under these CPU plus GPU workloads anyway.

So far, the Eluktronics RP-15 is the best Ryzen based gaming laptop I’ve tested when it comes to thermals and performance. The temperatures are a fair bit cooler when compared with others I’ve tested so far such as the ASUS TUF A15 or Dell G5 special edition, I’m mainly referring to CPU temperatures, but there are still quite a few other interesting models I need to get my hands on.

The only concern I had was the thermal throttling on the GPU in turbo mode, but I suppose that’s just part of boosting the GPU above 90 watts. It might also help explain why the RP-15 was a few frames behind the TUF A15 with 90 watt 2060 graphics, I mean it’s not a big difference, but with a higher wattage GPU, and better CPU performance, I thought it would do a bit better here, regardless these differences aren’t amounts you’d notice in practice. I asked why the 90 watt 2060 was used with Eluktroboost up to 110 watts instead of just the new 115 watt 2060 that Nvidia are offering, and was told that the extra 5 watts for the GPU offered very little performance difference. Basically this choice this allows more power to be reserved for the CPU instead, which as we saw did have high limits and was destroying the other 4800H machines I’ve tested.

The big open vents on the bottom gives us the option to drop the temperatures significantly with a cooling pad or stand, we can still get pretty good performance while running with lower fans in office mode too if you prefer having a quieter system, so I didn’t find much reason to cap the processor to base clock, but that’s an option too. Let me know what you thought about the thermals from the Eluktronics RP-15 gaming laptop down in the comments.