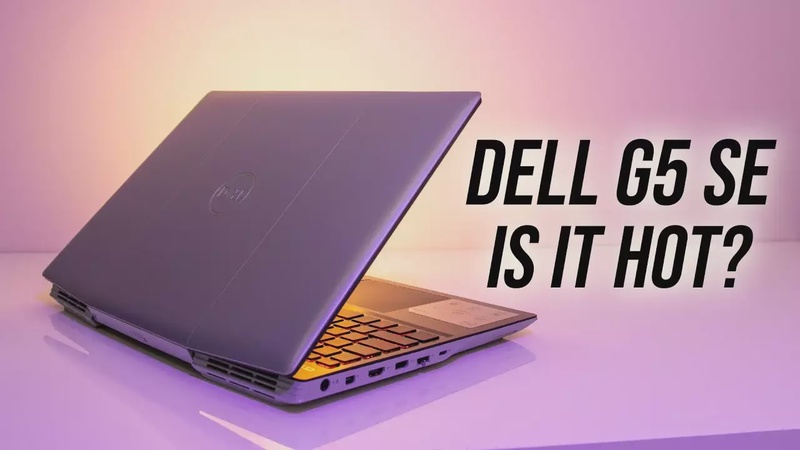 How hot does the all AMD based Dell G5 special edition gaming laptop get under different workloads? I’ve tested temperatures with the Ryzen 7 4800H and Radeon RX 5600M configuration to see what improvements can be made to thermals and performance.

I’ve got the highest version of the G5 SE here, which means we’ve got these specs.

Air comes in through the vents underneath which are positioned above the fans, however on the inside of the bottom panel there’s a dust filter mesh which may limit the air flow.

I’ll test with the panel removed later to see if this matters.

There are no exhaust vents on the sides, air comes out from the two corners on the back.

When the lid is open it’s not exactly blocking the vents, but hot air does blow onto the screen.

There are a couple of fans inside along with two heatpipes shared between CPU and GPU, and there appears to be a pipe dedicated to VRM coverage.

As the G5 has an AMD Ryzen processor and Radeon graphics, it’s able to use smart shift which cannot be disabled. Basically this will dynamically shift power around to where it’s needed for optimal performance. This will probably affect results, however we’ll be looking at long term averages here.

The G5 has the G key on F7, pressing this enables high performance mode which boosts performance and sets the fan to max speed. The G5 also has the Alienware command center software installed, and while you can use this to monitor the system, I wasn’t actually able to use it to modify anything like fan speed. Maybe I’m just doing it wrong, the options to make profiles are there, but they don’t do anything.

When you open the software up, you can see the parts on the main screen that usually let you toggle thermal profiles, but once it fully loads up these options vanish, so I’m assuming the cut down version of the software for the G5 just doesn’t allow this.

No undervolting to the processor has been done as there’s currently no support for this with Ryzen mobile, however we will look at disabling turbo boost, you can find information on how to do this linked in the description.

Idle results are down the bottom, and I’ve tested both with high performance mode disabled and enabled as it was a bit warm disabled owing to the fans being silent, but you probably don’t want to run at max fan speed while idle, I just wanted to show the difference.

Worst case stress tests were done with the Aida64 CPU stress test with CPU only checked and the Heaven benchmark at max settings at the same time, and gaming was tested with Watch Dogs 2 as I find it to use a good combination of processor and graphics. While under these loads, the processor was on the hotter side, similar results to the 4800H in the A15 though.

It was possible to improve thermals a little by enabling high performance mode, as this boosted the fan speed. In the stress test, the temperatures actually rose by limiting the processor to the base clock speed, and then the same for the GPU while gaming, this will make more sense in the next graph.

The cooling pad made the biggest improvement to temperatures while gaming, though in the stress test the CPU didn’t really change, however the GPU did drop down.

Enabling high performance improves clock speeds all round, presumably as a result of the higher fan speeds. While the processor is limited to its 2.9GHz base clock, the GPU reaches its highest speeds, which is probably as a result of smartshift sending the power over to the 5600M instead, we’ll see how this affects games soon.

The processor was actually running a fair bit below base clock in the stress test when I limited it, and if you recall in the last graph it was the hottest like this at 100 degrees, so it would seem it’s heating up as a result of the increased GPU performance due to the shared heatpipes.

The best results in terms of processor performance were seen with the cooling pad in use, as presumably thermals are the limitation here. It’s worth noting that we’re at 3.4GHz on all 8 cores best case here, the TUF A15 with the same 4800H processor was able to reach higher speeds at around the same temperatures in these tests.

Unfortunately I haven’t been able to properly measure TDP as HWInfo doesn’t yet seem to understand smartshift, as a result it was showing over 100 watts for the 4800H at times which is clearly wrong, and is likely a combination of both processor and graphics, but I’m not certain at the moment so I’ll hold off from publishing those numbers.

Let’s actually see how games perform with these different settings. Here are the results with Watch Dogs 2, the game we just tested.

The frame rate was down a little by limiting the processor to base clock speed compared to just running at stock, which makes sense to me given this game loads up the CPU well when running. High performance mode gave us a decent boost, and using a cooling pad was similar, just 1 FPS or so difference either way for the 1% low and average.

This tends to be more GPU heavy, which probably explains why this time with the base clock locked we’re seeing an increase over stock. If you recall, the GPU is able to perform best in this mode, so for games that don’t need lots of CPU power this could offer some extra performance, though if you recall the GPU was also running the hottest in this mode too. Given the peak GPU clock speeds were seen with the processor’s base clock limited, I thought it might do the best in this game, but that was not the case.

If you want to see more gaming benchmarks from this Dell G5 gaming laptop, check this link where I’ve tested 22 games at all setting levels.

Now let’s take a look at a CPU only workload with the GPU idle. Here are the clock speeds while running the Aida64 CPU stress test with all the default options checked

so we’re maxing out at around 3.8GHz over all 8 cores. Although this is a heavier CPU load than what we ran earlier, the processor is still running above 100 degrees Celsius

the same chip in the TUF A15 was getting to 90c in this test, though there was a big drop running at base clock.

The wattage of the 4800H in the G5 appears to go higher than the A15 though, which would explain some of that difference.

Here are some Cinebench results to give you an idea of CPU only performance when the GPU is idle. The single core score hardly changes except of course for when we limit it to the base clock, and the cooling pad improved the multicore score by 3.2% over high performance mode.

the 4800H is slightly behind the same processor in the A15, at least prior to using the cooling pad, but it’s honestly negligible and both are beating the Intel i7 options without issue, even some of the i9’s in far more expensive machines are losing.

As for the external temperatures where you’ll actually be putting your hands, at idle it was on the warmer side compared to others, but it was only a little warm to the touch.

At idle with high performance mode it’s much cooler, but it’s also much louder due to the increased fan speed.

With the stress tests running at stock the center of the keyboard gets to 50 degrees and it felt fairly warm but not hot.

It was similar in high performance mode with faster fan speeds

which makes sense given this hardly affected the internal temperatures as we saw earlier, and note the hot spots on the bottom of the screen.

I wouldn’t say the screen is blocking the air exhaust vents, but there’s definitely hot air blasting on the bottom corners of the screen despite the angle of the vents, but this could vary based on screen angle.

The bottom felt warm to the touch but not crazy hot

the hot spots we’re picking up here are through the vent holes in most cases rather than the plastic base that you actually touch.

How loud the fans get during these different tests? It was completely silent at idle, which helps explain the higher temperatures there. With the stress tests running at stock it’s around 48 decibels, then in high performance mode it’s around 51 with the fans at max speed. It’s worth noting that this is 5 decibels quieter compared to the TUF A15 under the same load, so it’s more tolerable.

I’ve also tried testing with the bottom panel removed to see if the vents or dust filters were restricting cooling.

Interestingly it was actually running hotter with the panel removed, however it was now hitting higher clock speeds.

So it seems that the G5 will take advantage of available thermal headroom to perform better.

So the Dell G5 seems to run hotter than the ASUS TUF A15 while performing a little below it, and that’s despite the A15 not having air intakes directly above the fans.

The G5 intake is partially obstructed by a dust filter mesh, but given taking off the bottom panel didn’t improve temperatures I don’t think it’s worth removing the dust filter, as that would likely just result in more dust and worse thermals down the road unless you’re willing to clean it more often.That said though with the extra air it did seem to run better, just at the expense of heat, that’s always a trade off.

The 5600M also seems to be more power hungry when compared to the Nvidia alternatives in the A15 series.

In CPU only workloads though, the A15 still runs cooler for similar performance with the Ryzen 7 4800H

so the higher temperatures can’t be blamed purely on the 5600M.

The A15 does run the fans 5 decibels louder than the G5, so this could explain some of the difference. Let me know if you want to see a full detailed comparison between the A15 and G5 gaming laptops.

It’s worth keeping in mind that the Intel based G5 gets up to 100 degrees too, as Dell seems to typically prefer higher levels of performance over thermals, so this is not specific to the AMD configuration. At the end of the day, the performance from this new all AMD G5 is quite good without the fans going crazy. Not everyone is going to want to run their laptop at these high temperatures when under load, but so far these results are starting to look pretty standard, though there are still plenty of other models out there yet for me to test, so stay tuned for that.

It may be possible to improve thermals by changing the thermal paste, and as I did buy this machine I could do that, however I want to keep it stock for now for some upcoming comparisons. Let me know what you thought about the thermals from the Dell G5 special edition gaming laptop down in the comments.