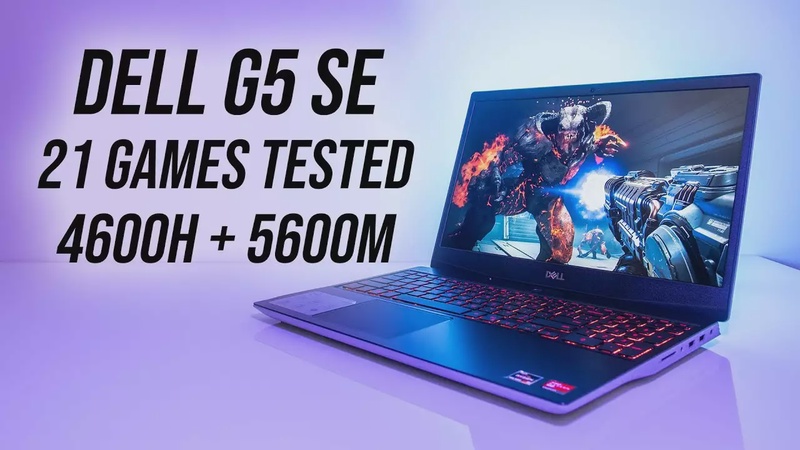 How well does the cheapest version of Dell’s new G5 special edition gaming laptop perform in games? I’ve tested 21 different games at all setting levels and compared it against other laptops to see how it stacks up, and spoiler, the results were very interesting.

The Dell G5 has the G key on the F7, pressing this enables high performance mode which boosts performance and fan speed, so I’ve done all testing with this enabled. As the G5 has an AMD Ryzen processor and Radeon graphics, it’s able to use smart shift which cannot be disabled. Basically this will dynamically shift power around to where it’s needed for optimal performance, for instance in a GPU heavy load the GPU will get the bulk of the power. AMD told me that the 5600M will run between 60 and 95 watts in the G5. We’ll only be covering gaming performance here, I’ll cover thermals in depth in the next article.

Let’s start out by going through all games at all setting levels, then afterwards we’ll see how the AMD Dell G5 gaming laptop compares with some other laptops.

Red Dead Redemption 2 was tested using the game’s built in benchmark tool, and this test is tough on pretty much any laptop regardless of specs with max settings, that said though the performance is more than 10 FPS ahead of the more expensive G5 with 4800H, I’ll explain this later.

Battlefield 5 was tested in campaign mode, and it was playing ok in terms of average FPS, however the 1% lows were on the lower side, perhaps due to the 8gb of memory, let me know if you want me to retest it with 16gb to see the difference.

Control was playing ok at high settings, though medium felt a bit better if you actually get into a fight, in my test it was able to get us above 60 FPS, while low could hit 100 FPS.

Shadow of the Tomb Raider was tested with the built in benchmark, and like Red Dead Redemption 2, it was actually performing slightly ahead of the 4800H G5, but again more on that shortly.

Apex Legends was tested with either all settings at maximum, or all settings on the lowest possible values, as it doesn’t have predefined setting presets. It was playing well even maxed out, which was still reaching above 100 FPS, however there were big gains to be had at minimum, which may help reduce input lag with the 60Hz panel.

Call of Duty Modern Warfare was tested in campaign mode, and I’ve also tested it with the settings either maxed out or at minimum, though there wasn’t as big of a difference between them this time compared to Apex, still playable at max though.

Borderlands 3 was tested using the game’s built in benchmark, and high settings was just under 60 FPS in this one, then it drops lower a fair bit at higher levels.

DOOM Eternal wasn’t able to run at nightmare or ultra nightmare settings as you need more than 6GB of VRAM, however I don’t think it really looks all that much better at higher settings anyway, and ultra settings was still plenty for the 60Hz panel.

Ghost Recon Breakpoint was tested with the benchmark tool, and although this is a resource heavy game, we’re still able to reach above 60 FPS at very high settings.

Fortnite was tested with the replay feature, and as a less demanding title it was still running very well with over 100 FPS at the highest epic setting preset, even the 1% low was above the screens refresh rate.

Overwatch is another less demanding game and was tested in the practice range. Once more no issues at all with the highest epic setting preset, and the 1% low was again well above the screen’s refresh rate.

CS:GO was tested using the Ulletical FPS benchmark, and there were only extremely minor differences between the three setting levels that I’ve tested with, so might as well just use maximum I guess.

Dota 2 was tested playing in the middle lane, and the results are down a bit compared to say an Intel based laptop, but honestly still pretty decent and you’ll be able to play it at maximum no problem at all.

Rainbow Six Siege was tested with the built in benchmark using Vulkan, ultra settings was doing well with 120 FPS, and like many others the 1% low is easily surpassing the screen’s refresh rate.

The Division 2 was also tested with the built in benchmark, the highest ultra setting preset was able to hit 60 FPS, though we could almost double this frame rate by stepping down to low.

Monster Hunter World was also around the 60 FPS mark with the highest setting preset in use, though this was just running through the main town, but higher is possible at low.

Assassin’s Creed Odyssey was tested with the built in benchmark, and despite not being able to hit 60 FPS at low settings in this test, it’s still usable as it doesn’t need a high frame rate to play in my opinion.

Far Cry New Dawn was also tested with the games benchmark, and ultra settings was still just able to get to 60 FPS in this one.

The Witcher 3 was playable with the ultra setting preset which was still above 60 FPS, though we could boost performance a fair bit with high settings, where even the 1% low was now above the average FPS at ultra.

F1 2019 was tested using the game’s benchmark tool, and yeah, plenty of frames for our 60Hz panel even at the highest setting preset.

Let’s also take a look at how this lower tier configuration of the Dell G5 special edition gaming laptop compares with other laptops, use these results as a rough guide only as they were tested at different times with different drivers.

In Battlefield 5 I’ve got this G5 highlighted in red.

As mentioned earlier, this lower specced G5 was ahead of the higher specced version in some games, and this was one of them - well at least in terms of average FPS, granted it’s just a 1 FPS difference, and to be fair the 1% low with the Ryzen 5 model was lower, but still an interesting result that seems to indicate the 5600M is doing most of the work here.

As a test that typically depends more on the processor, the 4600H G5 was behind the 4800H model this time, but it was only by 4 FPS or so, nothing major and hardly worth the few extra hundred dollars.

This was another where the cheaper G5 had a slight lead, yeah it’s only one frame, but consider this base model is $880 USD at the moment while the higher specced one is $1200.

These results are very interesting, in more cases than not, the lower specced and cheaper configuration of G5 with lower tier CPU and half the memory is beating the more expensive version at higher setting levels. I suspect that this is a result of smartshift, in theory the Ryzen 5 can use its power over fewer cores for higher clock speeds, and I doubt most games will see much improvement going from 6 to 8 cores, so with more power dedicated towards the 5600M this could explain why the cheaper G5 is performing better. I’m going to investigate this further and I’ll report the findings in a future comparison between the cheaper and more expensive G5, so stay tuned.

At the moment this G5 is available with two different screen options, we looked at the 144Hz panel in my previous review which had a 9.3ms average grey to grey response time, but this cheaper model has the 60Hz panel, and these are its results.

Basically the 60Hz panel has a 22.5ms response time, so it’s much slower comparatively.

As I’m not personally that sensitive to this, I can’t say I had any issues while gaming, well as long as FreeSync was enabled, the tearing is pretty bad with it off. In my last G5 video I mentioned FreeSync wasn’t working, however AMD have fixed this bug in a driver update. In terms of driver stability, I haven’t had any games crash so far, however as is the case with pretty much all Radeon based gaming laptops I’ve tested, running many games with Vulkan in particular would open on the Vega graphics instead. This is easy to fix by setting the game to high performance mode to ensure it opens up automatically using the 5600M, however ideally this would be fixed to just work out of the box.

Let me know what you thought of the gaming performance from this Ryzen 5 4600H and Radeon 5600M gaming laptop down in the commentsr.