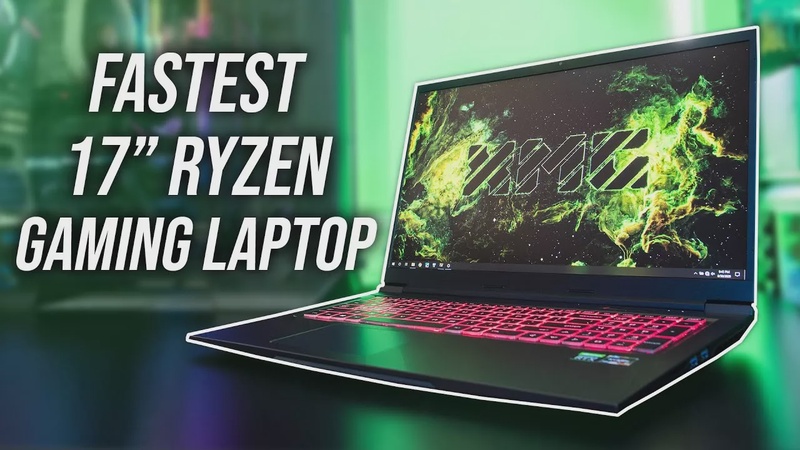 This is the first 17 inch Ryzen gaming laptop I’ve tested, it’s the XMG Core 17, also sold as the Eluktronics RP-17 in the US, but is it worth considering over the smaller 15 inch version? XMG offers this machine with some different specs, but I’ve got the higher end option with 8 core Ryzen 7 4800H processor and Nvidia RTX 2060 graphics, along with 16gb of dual channel memory and 144Hz screen.

The build quality seems ok for a plastic machine, but like the smaller 15 inch option it’s by no means a premium feeling, which is fine given the price point that it’s targeting.

The edges were smooth but the front corners could feel a little sharp. I’ve got an unbranded version straight from the factory, so my lid is just plain black plastic, and it’s the same deal for the interior and bottom panel.

There was some flex to the lid when trying to move it, but the hinge felt sturdy enough. There’s some flex to the keyboard, in particular towards the center above the touchpad, but it wasn’t super flexible for a plastic machine, I didn’t notice it during normal use. I wasn’t able to open it up with one finger as it’s more back heavy, though it still felt fine sitting on my lap.

The weight is listed at 2.5kg or 5.5lb and this is basically spot on with what I got, then with the 180w power brick and cables for charging it rises up to almost 3.1kg or 6.8lb.

It’s a little thicker at 3cm or 1.18”, the other dimensions weren’t too big for a 17” machine though, and this results in 6mm thin screen bezels on the sides.

The 17.3” 1080p 144Hz screen doesn’t have FreeSync, G-Sync, or the option of disabling Optimus. I measured the screen's average grey-to-grey response time at 7.3ms.

It’s a reasonable result when compared to many of the 15 inch options, and not too far off the 6.9ms needed to have all transitions occur within the refresh window.

At 100% brightness we’re looking at 306 nits and an 880 to 1 contrast ratio, so overall decent results for a gaming panel.

Backlight bleed wasn’t great in my unit, the bottom right patch was occasionally noticeable when viewing darker content, but this is just a sample size of one, results will vary between laptops and panels.

There’s a 720p camera above the display in the middle, no Windows Hello support though.

The keyboard has a single zone of RGB backlighting, and all keys and secondary key functions are illuminated. The font is a bit too gamery for me, the WASD keys in particular, but that’s going to come down to personal preference. Anyway it worked fine for me without any problems to note.

The power button is above the keyboard, along with an extra button that’s used to swap between the different performance modes, more on those soon.

The precision touchpad clicks down anywhere and worked fine, it was big enough but there’s space for a larger one owing to the 17” chassis. Fingerprints show up easily on the matte black interior, but as it’s a smooth surface it’s easy to clean with a microfiber cloth.

On the left from the back there’s a Kensington lock slot, air exhaust vent, gigabit ethernet port, USB 2.0 Type-A port, and 3.5mm mic and headphone jacks.

On the right from the front there’s a UHS-I SD card slot, two USB 3.2 Gen1 Type-A ports, and an air exhaust on this side too.

The rest is on the back, between the two corner air exhausts from left to right there are two mini DisplayPort 1.4 and HDMI 2.0 outputs, USB 3.2 Gen2 Type-C port, no Thunderbolt and this cannot be used to charge the laptop, followed by the power input.

There’s nothing on the front.

All three display outputs connect directly to the Nvidia graphics, bypassing the Radeon graphics, so good to go for VR, and the Mini DisplayPorts are G-Sync compatible.

Underneath just has some air vents towards the back, not a crazy amount but still far more than say the ASUS TUF A15, and those big rubber feet did a good job of preventing movement when in use.

Getting inside involved taking out 12 phillips head screws, and inside we’ve got two M.2 storage slots to the left in the center, two memory slots to the right of that, WiFi 6 card further to the right, and battery down the bottom.

I’ve got the smaller 46Wh battery which they stopped selling in favour of a larger 62Wh battery, so that should use more of that empty space. Battery life was very good even with the smaller battery though, lasting for 5 hours 45 minutes in the YouTube playback test.

Tom from XMG said that he expects a 1.3x increase to battery life with the 62Wh battery, so based on my results we’d be looking at 7 to 8 hours.

The two speakers are towards the front on the left and right sides. I thought they sounded ok, not great, but pretty average, there wasn’t really any bass, and the latencymon results were looking good.

Let’s check out thermals next. The gaming center software lets you select between different performance modes, which from lowest to highest are balanced, enthusiast and overboost modes.

In balanced mode you can also toggle ECO mode and change the fan between three levels, but there is also some custom fan curve control. The fan can be set to max speed in enthusiast or overboost modes, and overboost also lets you enable CPU power boost when you’re not running on battery power. Software doesn’t report the boost from 90 to 110 watts on the GPU when you enable overboost mode, this is what eluktronics refer to as eluktroboost, but by monitoring the power draw from the wall it was possible to see the difference.

Idle results down the bottom were good. Stress tests were done with Aida64 CPU stress test and Heaven GPU stress test at the same time, and gaming was tested with Watch Dogs 2. Interestingly the CPU temps were warmer than the smaller 15 inch model, though the GPU was a bit cooler here. If you recall, at times I had GPU thermal throttling on the 15 inch model previously tested, but the 17 inch model is nowhere near it. I think the CPU was hitting thermal limits around the 97 degree point, though the cooling pad was able to remove this in this heavy load.

These are the clock speeds reported in the same tests just shown, so 4GHz on all 8 cores in the stress test with the cooling pad, otherwise we’re looking at 3.6GHz in most of the other modes. Interestingly the enthusiast mode was giving higher CPU speeds than overboost, but the GPU speeds rise up in overboost as it’s this mode that boosts the GPU power limit.

These are the power levels reported by hardware info, now overboost should allow the GPU to boost up to 110 watts, but due to the way this works it can’t be reported by software, I can see the power from the wall increase when enabling overboost though, and as we saw in the last graphs we can see the GPU temp and clock speeds rise in overboost, so it’s definitely doing something.

Here’s what we’re looking at with a CPU only test, Cinebench R20, so no real change in single core performance between the three modes.

When we look at how it compares against others, it’s just slightly better than the HP Omen 15 and smaller 15 inch model, but realistically this is kind of margin of error range and it’s not really a practical difference, but either way still a very impressive result, basically only beaten by far bigger and more expensive 9900K laptops.

When idling the keyboard was in the low 30s, so cool to the touch and a normal result.

With the stress tests going it’s in the low 40s, so only a little warm.

Enthusiast mode was pretty similar despite the higher fan speed

then overboost was only slightly warmer, either way definitely not hot to the touch even after hours of use.

The fans were audible at idle, and then still on the quieter side with the stress tests running in this lowest performance mode. Enthusiast mode was louder, overboost was a little louder again, and then setting the fan to max speed was only a little extra, and it was just slightly quieter than the 15 inch model.

Now let’s check out how well it performs in games and compare it with some other laptops.

In Battlefield 5 I’ve got the Core 17 highlighted in red.

It’s just slightly ahead of the RP-15 with the same specs and about the same for the 1% low, but either way this is a new record out of the Ryzen laptops tested, at least in terms of average FPS. The 115 watt 2060 in the GL65 just above it was a fair bit better than the Ryzen options, but this seems to be due to Intel laptops having an edge in many games.

The average FPS is around 1 ahead of the RP-15 with same specs, though interestingly it got the exact same result for the 1% low, and this is an average of 5 test runs, again making it the best result from any Ryzen gaming laptop I’ve tested so far.

Shadow of the Tomb Raider was also tested with the games benchmark tool with the highest setting preset, just a couple of frames ahead of the 15 inch version here, and once more the best Ryzen laptop result so far.

Now for the benchmarking tools.

I’ve used Adobe Premiere to export one of my laptop review videos at 4K, and lower times are better here. It was similar to many other Ryzen based laptops as this export task sees a benefit from Intel chips with Quicksync.

I’ve also tested Premiere but with the Puget systems benchmark which also accounts for things like live playback rather than just export times. Higher score is better here, and compared to others this one was much better now, only just slightly behind the RP-15 with same specs.

The score was a bit lower in Adobe Photoshop, though I’m not too sure why as the CPU performance was still quite good.

In DaVinci resolve though it’s scoring the exact same as the RP-15 with the same CPU and GPU combination, so tied for the best Ryzen laptop result in this test. This test is GPU heavy and no other Ryzen laptops out there are currently paired with a boosted 2060.

I’ve used Crystal Disk Mark to test the storage, but speeds will vary wildly based on the storage you select when ordering.

The UHS-I SD card slot was on the slower side, but still better than not having it at all, and the card sticks out a fair bit when inserted.

XMG are selling the lower specced model for around 1170 Euro, but the price will depend on the hardware you select, the config I’ve tested is almost 200 more. In the US the early launch price is $1140 USD at eluktronics, and here in Australia it’s the Apex 17R from Aftershock which starts from $1800 AUD.

So to summarise, the performance is just ever so slightly ahead of the 15 inch model in most cases. The GPU was cooler here, but CPU warmer when compared to the 15 inch, but at the end of the day I don’t think it’s going to be a noticeable difference, so basically you’ll want to pick between 15 or 17 inch models based on the screen size you prefer, I think that’s going to be the biggest difference all things considered. I personally prefer portability, so I’d go for the 15 inch, but the larger screen is definitely appreciated while gaming if you’re not using a bigger external screen anyway.