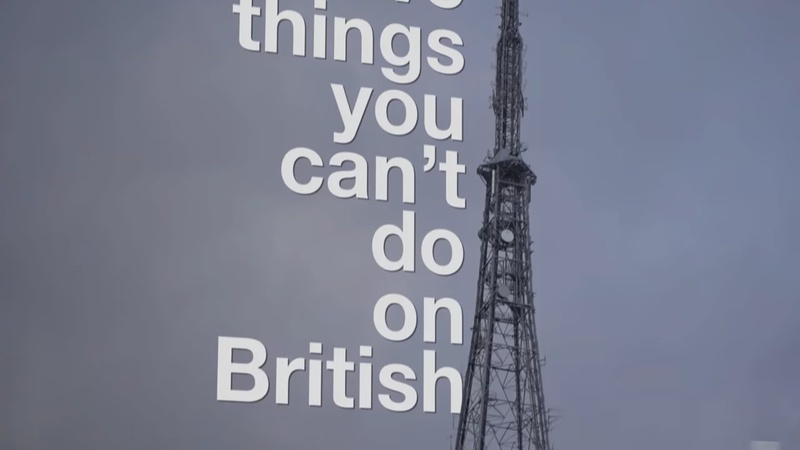 I grew up in the age of linear television, when most people in Britain had a  choice of only four or five channels and when a lot of the nation watched  the same shows at the same time. And when a medium has that much power, it gets regulated heavily. Some of those regulations are sensible, and some do sound a bit strange if you've never heard of them before.

I'm not including things that break other laws, or anything vague like "cause offense"  that's true basically everywhere, just with a different definition  of what "offense" means. These are things that you can publish on YouTube, that you might well be able to broadcast  in other countries in the world, but that you cannot do on British television.

Any demonstrations of hypnosis on stage  must be licensed: and that's still true. The fine for unlicensed  stage hypnosis can be £1,000. Local councils still regulate that. Because back in the 50s, that was a concern. Hypnosis was a bit scary. To the point where there was a glut of low  budget horror movies about hypnotic possession. So stage hypnosis was licensed,  and television hypnosis was banned.

These days, that regulation isn't  there because they're worried about some evil hypnotist taking over  the world through the television, although that was a plot point in terrifying  90s kids show The Demon Headmaster. Although, let's just say that child  actors have got a bit better direction in the years since then.

But better safe than sorry. If you did broadcast a hypnotic  induction to millions of people, then the chances are that  someone is going to believe that it's done them some damage. Except. You can absolutely get  away with that if you're careful.

In 2009 illusionist Derren Brown performed a stunt in which he played out a "subliminal film" which he claimed would make  some of the folks watching feel like they were stuck to  their chair. He also said: "The film is not effective at a lower resolution, "so if it gets posted on  the internet it won't work." Which is ludicrous. British television was low-bitrate  standard-definition digital by then anyway. Those are lies. But they are a magician's lies,  so they're part of the show.

That's a textbook hypnotic induction technique. I mean that literally, I  checked a hypnosis textbook. And there's almost two minutes of it, complete with slow-eye contact zoom! But he didn't say it was hypnosis. He never claimed to be hypnotizing people. He's just influencing with  some words and some wavy lines and there were only five complaints  about it to the regulator, who didn't investigate. But officially and legally you can't  try to hypnotise people over the air.

There's a list of sporting  events, defined by Parliament, that must be available on free-to-air television. This goes back to 1996, when paid television  channels, satellite and cable, were becoming a thing in Britain. Those services had a lot of money, and in theory, they could outbid the free-to-air  channels for things like the Olympics, and Wimbledon, and  football and rugby cup finals, and, uh, some horse racing.

So Parliament put a law in place: pay-for television services  cannot broadcast any of those unless the rights are also available at  a fair price to free-to-air channels. Although it also works the other way. Free-to-air channels can't lock  up exclusive rights either, because that would be unfair to the paid... look, it's complicated and it's messy, and there are all sorts of rules to try and  establish some sort of level playing field while also making sure that the World  Cup final doesn't go pay-per-view.

Incidentally while I was  researching this I found that other European countries  have a similar list of events and there are some wonderful  national stereotypes in there. Austria: World Nordic Skiing Championships. Finland: the Ice Hockey World Championships. And Ireland: the hurling finals.

This all makes sense. Governments do not want events  of national cultural importance, and those sporting events are that, they don't want those events to become irrelevant because they're only available  to people who can pay.

That's not in the modern sense of fake news, although the regulations say reporting  does have to be neutral over here as well, but fake news in the War of the  Worlds radio broadcast sense. You can't risk someone flipping through channels only to land on your fictional news story and think there's been some disaster.

You can see this in action in Crisis Command, a brilliant and ahead-of-its-time show from 2004 where three people are asked  to deal with a fictional crisis as if they were government ministers. The story plays out through  fictional news broadcasts that use actual BBC reporters  and actual BBC newsrooms.

So to get around the rule, the  footage is always shown in context. Never full screen. There's always someone else in frame or walking through the shot sometimes. And the same happens in drama shows. A news report about the end of the  world must always be in context.

As far as I can tell no one's  trying to get around this lately. The last time I know of, or at least the last time that  something sort-of like this happened, was the now-legendary Ghostwatch, on Halloween night, 1992. It pretended to be a live ghost investigation hosted by genuine real-life trusted presenters and of course: it Goes Wrong.

It was introduced in context- but if you missed that context,  well, it was a clever show. It knew how to use and misuse the medium, and it scared quite a lot of people. And it influenced a generation  of writers and producers. Not technically news, though. Given the tabloid fury afterwards,  no one's made anything similar since, although after nearly 30 years we are  probably about due for someone to try it.

There are exemptions for channels with low budgets and small audience shares and for broadcasters who are just starting out, but even from day one, as an absolute minimum, 10% of a channel's output has  to have subtitles as an option. Once the channel's established  that goes up to 80%. Plus, 10% has to have optional audio description. 5% must have sign language, even if  that's just added on a late night repeat.

Accessibility should be a right and a legal duty and occasionally channels do get  called out for forgetting that. Controversial opinion: this should  be true for YouTube as well.

5. Show too many commercials

I could do a whole article on  advertising law and product placement. I still intend to at some point,  I've been promising it for ages. But I do want to highlight just one specific rule: 12 minutes per hour. The maximum amount of commercials  allowed on all British channels. For some of the older channels it's even less, seven or eight minutes per hour. And that's it. There are a few other rules about how far apart commercial breaks can be from each other and how long they can be and occasional small loopholes  for odd circumstances, but the big number is: 12  minutes per hour maximum.

And that's not some rolling-average total. That's per hour on the clock,  which means that channels will juggle their schedule by a  couple of minutes to fit things in. If there's a less popular show right  before a primetime ratings-grabber, that less popular show might have  no adverts in the middle at all. Sure, they might still take a break, show a couple of trailers for their own channel that don't count towards  that big time on the clock, but the schedulers will make sure that there's as much advertising as possible just before the top of the  hour, just before the big show, and then just after the top of the next hour.

There is an art to fitting all that in, and out of all these rules, this is the one thing that  you cannot get away with. The regulator checks. They will notice and many channels have been pulled up on it. But there was one thing that I did  notice while I was researching this. There is one other line in  those rules which says that commercial breaks must be taken in a way that doesn't disrupt the flow of the program. I explicitly rules out that Who Wants To Be A Millionaire trick where someone has just chosen their answer, and it's all dramatic, and the host says... "Time for a break." Like, it's really clear that's not allowed. There's no other way to read that sentence. But the show's hosts have been  doing that for 20 years now, and they've never been called on it. There are some rules, apparently,  where entertainment can come first.

Why There's No Channel One in America

Jacob Enderson in Uncategorized
17 May 2020