History Behind Ctrl-Alt-Delete and other key combinations? 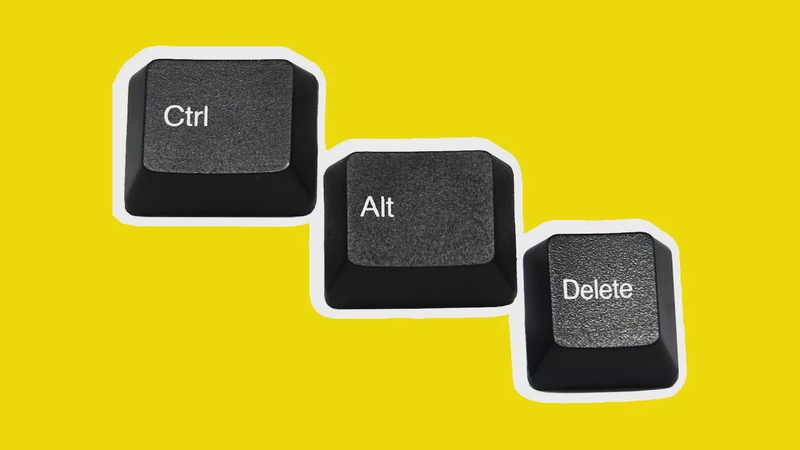 It's been a long time since the days of command line computing, where we accomplished the vast majority of tasks with a keyboard and the use of a mouse was rare or unknown. But even though we're all used to pointing and clicking these days, plenty of keyboard shortcuts are still incredibly useful. But did you ever take a moment to think about where some of these seeming random button combos actually came from?

In this article, we're going to take a look at a bit of the history behind them, starting with our old friend Control+Alt+Delete. The engineers behind the original IBM PC in the early 1980s wanted a quick way to restart the machine from the keyboard. But they didn't want to make it too easy, lest the user accidentally reboot the computer and lose whatever they were working on. At first, control-alt-escape was proposed, but all three of those keys are on the same side of the keyboard.

So it was thought that combo would still be too easy to trigger by mistake. So instead, delete was assigned to be the third key.

Funnily enough, even though control-alt-delete persists as a standard key shortcut to this day, it was originally intended just for development use, but was leaked to the public after it was included in some IBM reference documents.

By the time Windows 3.0 rolled around, the combo was no longer linked to the BIOS as a way to reboot the computer immediately.

Instead, the OS presented you with a screen, allowing you to go back, terminate the program that was running, or reboot the whole system by pressing the combo again, and Windows 9x gave you the similar screen that allowed you to close any running program.

In XP, the combo would bring up the task manager instead, and nowadays Windows 10 gives you a screen with several useful options when pressing control-alt-delete, but pressing the keys again actually doesn't do anything.

Let's move on to another one we use quite a bit. Alt + F4, for closing a program or a window. When you think about it, it seems pretty random. Why not something like Alt+C for close or All+G for just go away? Well, Alt+F4 has its origins in a 1987 IBM project called Common User Access. The idea was to standardize how a user would interact with software, no matter what kind of system or program they were using as back then, different programs had wildly different key combos to accomplish the same task, even among the same class of application, such as word processors.

Some of the standards are still in use today, such as F5 to refresh a page. The reason Alt+F4 was mapped to the close function was because the designers used other alt function key combos to manipulate Windows in different ways, such as Alt+F8 to resize and Alt+F10 to maximize.

And although many of these shortcuts have fallen by the wayside because people weren't using them, Alt+F4 remained popular. So it still serves as a quick way to close your browser if your boss walks in and you don't want him to know you were doing something other than working. I know that well.

Speaking of hiding whatever it is you were doing, let's finish up by talking about Alt + Left Arrow. If you're a fan of using keyboard shortcuts specifically in your web browser, you might be familiar with this one. It's the way to go back one page without clicking the mouse, but going back is something we do super frequently. So why not just have one button for it instead of a combo? Well, we actually used to. It wasn't too long ago that you could actually hit backspace to go back a page in many web browsers. But a big problem was that people kept hitting the key by mistake. Users would be filling out a form on a web page, and need to delete something, but accidentally click outside of the text box, meaning the backspace button would take them off the page rather than just delete one character. And oftentimes when the user would click forward to get back on the intended page, they'd discover all the data they'd entered was wiped out. This led Google to change the shortcut in Chrome in 2016, which is now standard across major web browsers.

Do you have a favorite little-known keyboard shortcut that helps you out? Let us know down in the comments.