How To Build A Gaming Computer From Scratch Under $1000?

Ahhh, the self-built computer. The unquenchable need for newer and better hardware combined with the internet's wealth of knowledge to develop some fantastic DIY PCs. Sure, bright LED lights would peer out from some overzealous builder's enclosure, but they were a sign of the tight link shared by a machine and the guy who constructed it. 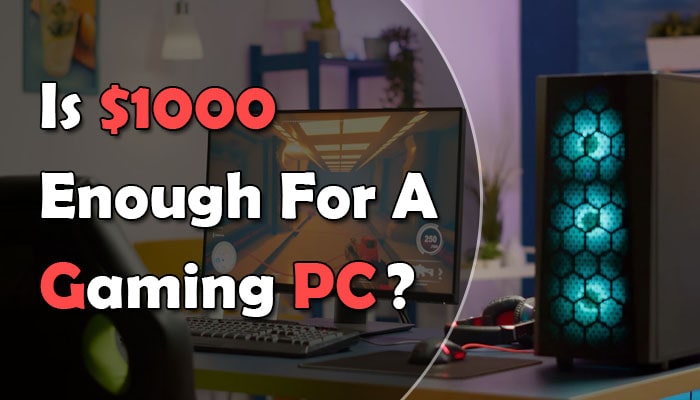 Before I explain my thought process behind each item, you'll need at least seven things to create a gaming PC:

Graphic Cards: The GPU, or graphics processing unit, is arguably the most important part of a gaming machine. Your PC's photos are processed by it, and your monitor shows the results. Greater GPU power results in better in-game graphics and sets.

CPU: What powers your computer is its CPU. The CPU is responsible for routing instructions from one system in your computer to another. The faster a CPU can communicate information for both software and hardware processes, the better.

Motherboard: The motherboard houses all of your computer's hardware. The most significant aspect of a motherboard is its compatibility with the components you select, but motherboards can also have integrated graphics cards, Wi-Fi systems, and other features.

RAM: RAM has an impact on the amount of information your system can manage at once. RAM, to put it simply, is where your computer keeps the data that it needs to access right away.

Storage/SSD: Ssds and hard disc drives are the two main categories of PC storage. That's where your data goes while they're not being utilized in any event. Greater storage space is provided by larger drives.

Power supply: The power supply, which may be both the least interesting and most significant piece of the PC jigsaw, performs precisely what it says it will: it distributes electricity from an outlet to various systems inside your computer. Making the right decision could be challenging, but when you do, you'll likely never have to worry about it again.

Casing: Although some models incorporate fans for additional cooling, your computer casing is mostly a creative decision. Although an "open-air" configuration is theoretically possible, a case is unquestionably a better option for keeping pollutants out and components safe.

Its $399 price tag necessitates certain storage and memory sacrifices, but we believed they were worthwhile. A graphics card is the most important aspect of a gaming system’s performance ceiling, and settling with a good but not excellent alternative didn't feel right. Additionally, you may play at resolutions higher than 1080p while still keeping faster frame rates thanks to this card.

On the other hand, you could believe, sensibly, that a GTX 1060 is sufficient for this sort of rig—and that decision saves you $100. You can get a sense of the frame rates you might anticipate with various cards in multiple games.

Your processor could pose a barrier to gaming, and other components are more likely to slow you down whenever you achieve a specific minimum staging barrier, which many contemporary CPUs do.

Recent processors have a far higher baseline of competence than earlier CPUs, making them more efficient than before. For the configuration, I selected For $179, you can get an 8th generation Intel Core i5-8400 CPU that is more than adequate for handling popular online games.

Some high-end enthusiasts may insist on a Core i7, but The Hyper-Threading functionality that makes Core i7 machines so appealing for other CPU-intensive activities isn't used by the majority of games. For most builders, a Core i3 will be adequate, but since it powers the structure for both gaming and daily tasks, we thought we'd welcome the added power.

For something like a different entry in the "designed to be included" category for this system, I decided to use two 4GB sticks of this RAM. For many years, RAM was a very affordable component of PC systems, but in 2018, RAM costs shot through the roof and have not since come down. However, $79 for 8GB is reasonable pricing.

Although eight gigabytes is plenty for gaming, a few builders may hold on to 16GB, same to how a Core i7 CPU is superior to a Core i5. Adding extra RAM has advantages; it won't harm and can reduce the amount of time it takes for games to load. So, if you come across a nice price and have extra cash, throw in an extra 8GB.

The storage is true of great quality—I propose a swift 500GB Solid-State Drive (SSD) from Crucial (SSD). However, 500GB will be sufficient for every one of your games and other items since there isn't an additional hard drive included.

Of course, considering the massive install sizes of modern games, that will fill up rather rapidly. As a result, you'll only be able to have your favorites or the most recent files downloaded at any particular time. However, if you frequently exceed the storage capacity, you may always add extra storage. There is plenty of room in the casing for additional drives, even a couple of bigger 3.5-inch hard discs.

The initial generation of These more affordable B360 variations is more recent than 8th generation suitable boards, which cost well over $100. This model has plated heatsinks that are not obstructive and a good assortment of ports installation, and it matches the black-and-white colour project.

Users cannot overclock CPUs installed on B360 boards since they only support one video card. That fits the construction philosophy for this particular project perfectly. Therefore I was happy to save money. This motherboard is inexpensive at $79 after a $10 discount and is straightforward yet functional. Nowadays, thesis help services aren’t that expensive.

You might determine how much electricity is needed to run the system after making those choices. The main power consumers are the GPU and CPU. Moreover, given the elements I chose, the 650W Corsair VS Series VS650 is adequate. The VS650 has some leeway for safety because a GTX 1070 and its related components can handle 450 to 500 watts with ease.

It's not one of the good alternatives it's and lacks certification in gold or platinum but it should suffice in a venture that just doesn't demand a substantial amount of power and is trying to stay under budget.

In this case, you establish the mood for the entire construction in many ways. Because it is the most visible component of the jigsaw, its aesthetic dictates the subject and colour palette. I chose the Lian Li Alpha 550W chassis because I needed some camera-friendly flash.

The choice to use a black-and-white theme for the remaining components—a clear, futuristic look—was heavily influenced by this modest tower.

The components will be highlighted by the huge, tempered window panes on all 4 sides of this case, which also includes striking fan lights in the front. We didn't have to spend time during a continuous build installing our own lighting, which made it more enjoyable.

Who wouldn't want that? It also seems to be pretty straightforward to incorporate. This chassis is plainly overpriced at $127 as of this writing; if you're on a tight budget, you could easily save money with a less costly case. However, it looks amazing.

Lastly, even while I'm confident that these parts will combine to create a quality gaming machine, I'm n't yet saying that this is the best build possible; says Maxwell Fraser Senior IT Manager at EssaysnAssignments, an astute reader could undoubtedly do better, especially if they had a separate price. But that's part of the appeal of building a computer: no two are alike, and each has benefits and drawbacks.