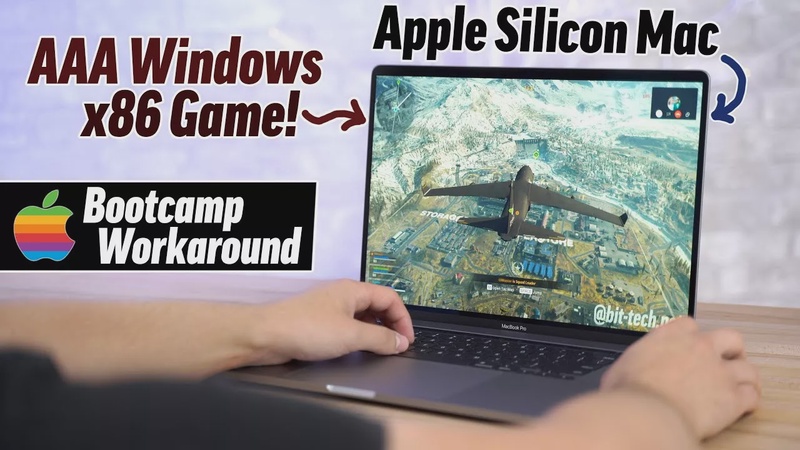 If you read my previous articles on Apple Silicon Mac Gaming, you’ll know how confident I am that Apple’s transition from Intel chips to their own Apple Silicon chips on their Mac computers is going to be huge for gaming. And we know this thanks to the massive amount of times Apple mentioned brand-new gaming changing in their WWDC 2020 developer videos, including full-fledged game controller support, cross-platform multiplayer gaming support, keyboard and mouse gaming with pointer locking coming to the iPad, and of course, iPhone and iPad games coming to Apple Silicon Macs on day 1.

The main downside to all of this is that Windows 10 gaming using bootcamp is going away thanks to the switch to ARM-based Apple Silicon chips, and that’s why we’ve still been recommending Intel-based Macs like the 16” MacBook Pro currently on sale for only $2100 on Amazon right now, for users who want to continue playing those games. And that’s because there’s a fairly low chance that the current x86 AAA Windows games are going to be ported over to Apple Silicon Macs.

users who want to buy an Apple Silicon mac later this year but also want to play Windows 10 games now have a very good solution to this problem, and that’s the new Shadow game streaming service.

But this isn’t like any other cloud game streaming service out there, like Geforce Now, Playstation Now or Google Stadia. Shadow actually allows you to stream a fully featured gaming PC to all of your devices, including your iPhone, your iPad, your Apple TV and your Mac.  Unlike other platforms like Stadia which allow you to stream from their game library, Shadow gives you an entire Windows operating system to use as you see fit, so you can play any game on Windows 10, with no limits.

So if you purchase a game on Steam, it’s yours forever, even if you cancel your Shadow subscription. This works basically the same way as if you had an intel-based Mac and used Bootcamp to game on Windows 10.

You might be wondering, how am I so certain that Shadow will work on an Apple Silicon Mac? Well, Shadows own iOS developer, Thomas, spent hours reading through published press articles about Apple’s WWDC 2020 event, and his conclusion is that the new features Apple is adding this year are gonna greatly improve gaming, specifically cloud gaming using Shadow. There’s now finally full mouse support for every type of game in iOS, iPadOS 14 and even TVOS 14, with the most important feature being cursor locking for games like League of Legends, Overwatch and call of duty which is a monumental advancement for game inclusivity.

He then mentioned that the new update allows Shadow to add trackpad support for the new iPad keyboards. And they went even further by allowing support for every button than a mouse can have, even a mouse like this one from Razer.

He mentioned that the new update will allow for notifications in the Shadow app when a mouse has been plugged in or connected using Bluetooth. He also talked about gamepad support, saying that we should be able to use all third-party gamepads, and it even supports the PS4 controller touchpad, and all buttons on the Xbox Elite 2 controller. There’s even rumble, battery level and controller color support.

Apple also added support for performance-intensive apps & games in the new update as well. Basically, these new changes from Apple’s WWDC event will greatly improve the overall experience for Shadow users once they’re able to implement the new features. And he finished by saying the future of iPhone, iPad and Apple TV is bright on Shadow, and that we’re now in a whole new ball game thanks to iOS & iPadOS 14. And you can bet that Shadow is coming to Apple Silicon Macs, especially since they’ll be able to run unmodified iOS and iPad apps on day 1, and Shadow will obviously continue support for the Mac going into the future.

Perhaps the best part about all of this is the price, starting at only $12 a month with the option to upgrade the storage from the base 256 GB SSD. This cloud PC will come with 3.4GHz 4 core CPU, 12 GB of RAM and a GTX 1080 graphics card or better. And the best part is that Shadow has been optimized for most connections, even 4G LTE. And even better, it’s not limited to just gaming, you can use your Shadow Cloud PC to do anything you can regularly do on a Windows PC, like editing 4K video or doing other professional work. So I hit the preorder button and it says that if I order it right now, it should be activated and available for me to use this September.

Shadow also has the Ultra and Infinite options for $25 a month or $40 which include better systems with higher performance graphics cards like the RTX 2080 or Titan RTX that support 4K with Ray Tracing, but unfortunately, Shadow just released a statement saying that preorders of those high-end systems are delayed until early 2021.

But that’s actually when a lot of people will be buying the new Apple Silicon Macs, and that will give them extra time to update Shadow to support all of the new gaming features that Apple is adding this year. And for the time being, you can still use the standard $12 a month version of Shadow which comes with a GTX 1080 graphics card.

So what I wanna do is compare the price of Shadow to the current option of gaming on a Mac. By far, the best and most cost effective way of Windows 10 gaming on the Mac right now is buying a 13” MacBook Pro and an eGPU setup using bootcamp to run Windows 10. And in our experience, the best option for an eGPU is the Razer Core X enclosure and a 5700 XT graphics card for a total of $680 on Amazon.

But because of the inefficiencies that come with using eGPUs, we got a Geekbench 5 graphics score of around 55 to 58,000 points in the best case scenario, compared to around 53,000 points for the GTX 1080.

So it should give you a fairly similar gaming experience, especially if you don’t play at high graphics settings.

So if you take that same $680 you would’ve spent on the eGPU setup and use it to pay for the base version of Shadow, that’ll get you over 4 and a half years of Windows 10 PC gaming over the cloud on any of your Apple devices, including the future Apple Silicon Macs. Of course, users are likely to upgrade to the storage and to the better Shadow systems, but if you want to switch to an Apple Silicon Mac but don’t want to give up your current gaming library on Windows 10, this is actually going to be the perfect overall solution. And the reason it’s perfect is because it’s totally different from all of the other cloud gaming services, and the developers of Shadow are extremely excited and ready to adopt all of the new gaming features that Apple is bringing to their devices. So if you’re the type that hates mobile games and you’re not excited to play those games on the very first Apple Silicon Macs, you now have a really great option instead of being forced to stick with an intel-based Mac to play games on Windows 10.

Apple is secretly making a HUGE push into Gaming in 2020