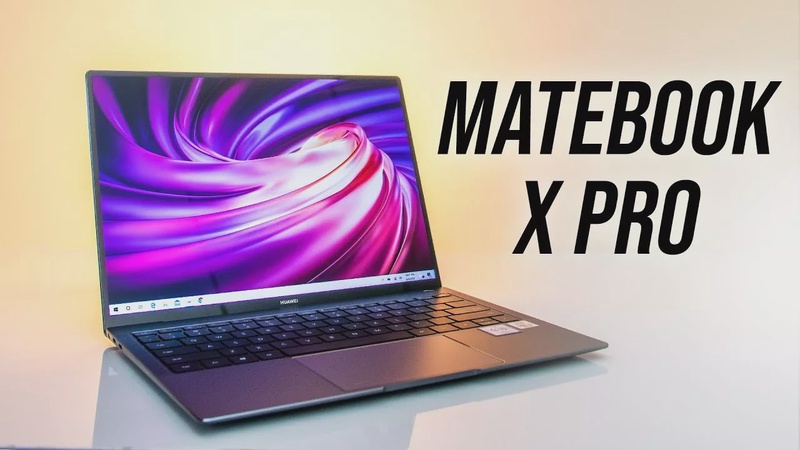 The Huawei Matebook X Pro 2020 is a premium thin and light notebook, but despite the smaller size it’s still got discrete Nvidia MX250 graphics inside.

It’s got a solid aluminium build with a space grey finish, no sharp corners or edges anywhere.

If you've also got a supported Huawei phone, you can tap it on the right towards the front and it will use NFC to activate sharing.

Basically this integration allows you to view the phone on the laptop and drag files or text between them, or use the laptop for messaging with its keyboard instead of phone touch screen.

The weight is listed as 1.33 kg on their site, and mine was a little below this. With the small Type-C 65 watt charger and cable for charging we’re looking at just over 1.5kg or 3.36lb.

It’s definitely a smaller and very portable machine when compared to others, the screen bezels on the sides are just 6.5 mm thin, so we’ve got a high 91% screen to body ratio.

The touch screen worked alright, while drawing with my finger there seemed to be a little lag, it didn’t come with a pen for drawing though, otherwise it was fine just interacting with Windows. It’s got some built in shortcuts too, like 3 finger swipe to take a screenshot.

Backlight bleed was extremely minor, just some small glow down the bottom corners which I never noticed during normal use, but this will vary between machines and panels.

There’s almost no flex to the screen when intentionally trying to move it, the metal lid feels very sturdy, however while doing this it did slide around a bit, identifying a different issue. It seems that the feet underneath are a harder material and not that grippy so it’s easier to slide around on a flat surface.

Chassis flex was also on the lower side when pushing down hard, overall it felt sturdy and well-built. Despite the smaller size, there were no problems opening it up with one finger, it felt well-balanced and sat fine on my lap. The 720p camera has an interesting placement, it’s between the F6 and F7 keys, you just push it down when you want to use it and it pops up out of the keyboard, so this also acts as a physical privacy filter.

Due to the camera placement there’s no way of adjusting it, and when you type on the keyboard your fingers do kind of get in the way a bit. The keyboard has white backlighting which illuminates all keys and secondary key functions, and brightness can be adjusted between two levels or turned off with the F3 key, though it didn’t seem too bright. The chiclet keyboard was good to type with, it felt a little clicky and I had no problems with it.

There’s a fingerprint scanner in the power button above the keyboard on the right, and I found it to work very fast and accurately. When you power on the machine it will use the fingerprint when Windows is ready, so it will log you in with just one touch from being off.

The precision touchpad was quite large for a 13-inch laptop, it’s using all available space. It clicks down anywhere and feels great to use. Fingerprints show up, but as a smooth matte finish they aren’t too easy to see and are easy to clean with a microfiber cloth.

On the left we’ve got a 3.5 mm audio combo jack and two USB Type-C ports, both can be used to charge though the port at the back will be faster, and both support DisplayPort out via the Intel iGPU, while the right side just has a USB 3 Type-A port at the back. It also comes with a Type-C dongle which gives you VGA and HDMI ports along with another Type-C so you’re not losing the port from the dongle.

There’s nothing going on over on the back or front, both are just clean. Underneath is clean too, no air intakes here, just the hard rubber feet.

To get inside you need to take out 8 TR5 screws, and the 4 down the front are shorter than the 4 at the back.

Inside we’ve got the battery down the front, and we can just see the 1TB M.2 SSD below the heatsink to the back left, so the cooling needs to be taken off to change that but at least it can be upgraded unlike the RAM, though soldered memory is quite standard for these smaller machines.

The front facing speakers are on either side of the keyboard, they don’t look like much but they sounded well above most other laptops that I’ve tested. There was some bass and they still sounded clear at max volume, though there was some vibration in the wrist rest area, and the latencymon results were looking good.

The Matebook X Pro is powered by a 56wh battery, and with the keyboard lighting off and screen brightness set to 50% it was able to last for just over 8 hours, a fair result when compared to other options considering the smaller battery size.

At idle it was cool to the touch, for context most laptops I test are around the same 30 degrees on the exterior at idle.

With a CPU and GPU stress test it’s warmer, in the mid 40s in the center.

The wrist rests were a little warm, it was warmer on the keyboard but never felt hot. It was silent at idle, and then under stress test the single fan was able to get a fair bit louder when compared to many other thin and light machines I’ve tested. It wasn’t a high-pitched noise though, and this is a worst case stress test. Even with this worst case load we’re just looking at 76 degrees Celsius on the CPU and 77 for the GPU, so not bad at all considering the thinner form factor, though this was because the processor only ran at 8 watts with a 2GHz speed over all 4 cores, so still above the 1.8GHz base clock of the i7.

When we look at processor performance

it’s one of the lowest I’ve tested in a while, but I think it’s also the first time I’ve had the 10510U processor, and at 13” this is one of the smallest, so that’s going to be expected.

Although not a gaming laptop by any means, as it’s got Nvidia MX250 graphics it should be possible to do some lightweight gaming. All testing was done at 720p with the lowest setting preset available.

The esports titles are going quite well, and while the AAA games were usable at minimum settings, just don’t expect an amazing experience.

I’ve used Crystal Disk Mark to test the 1TB NVMe M.2 SSD, and the speeds were quite good.

Here in Australia the exact configuration I’ve looked at is $3200 AUD, which converts to around $2000 USD, so definitely a more expensive option granted stuff typically just costs more here than in the US. This is the highest end version of the Matebook though, there are cheaper options too. Overall I thought the Matebook X Pro was a nice machine, and I would use it over my cheaper Xiaomi Mi Air.

The main problem I had was just the level of performance on offer for the price tag. Smaller machines with good features and specs are always going to cost more, especially with the discrete graphics, you’ll have to ask yourself what the priority is. If you’ve also got a Huawei phone and want to take advantage of the built in integrations then it could be useful, but yeah basically to summarise, a nice portable machine but definitely on the more expensive side.

Let me know what you thought about the Matebook X Pro laptop down in the comments.