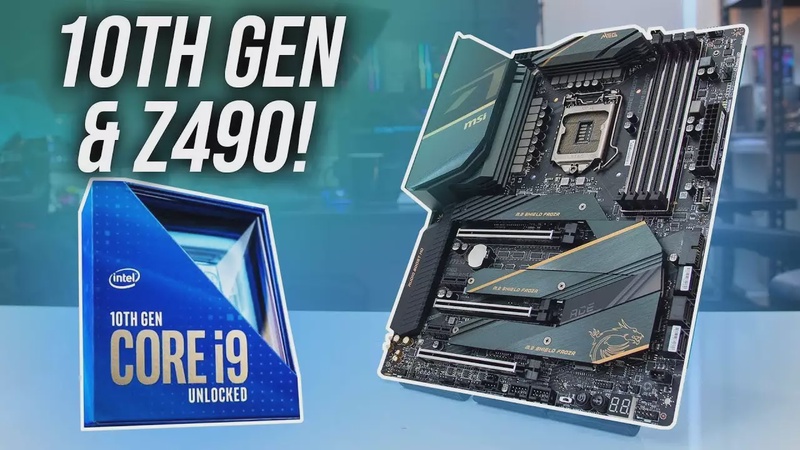 Intel is launching their 10th gen desktop processors, so let’s check out what new chips are coming, find out more about the new XTU settings and features, and see what the Z490 platform is going to offer us.

First up let’s check out the new processors that Intel will be offering with 10th gen Comet Lake-S.

We’ve got the 10 core 20 thread i9-10900K at the top of the stack, it’s got a 5.3GHz single core turbo boost speed however that’s with thermal velocity boost, so will only get hit if thermals are in check.

Down from that is the i7-10700K, an 8 core 16 thread part which in a way would essentially replace the 9900K from 9th gen. Unlike the 9th gen i7 though, it’s got hyperthreading. The price Intel has listed here is $374 USD, but it’s worth noting these prices are when buying 1000 units in bulk and not what you’ll end up paying from the store. These parts are also listed with a 125 watt TDP, and while I doubt most would run these with that limit anyway, it’s worth remembering the 9900K is 95 watts, so it kind of makes me wonder how much of the performance difference will simply be due to boosting the power, as we’re still on 14 nm.

On the i5 side the 10600K is a 6 core 12 thread part, a welcome move away from the 9600K of last generation which didn’t have hyperthreading.

In fact all of these new 10th gen chips appear to have hyperthreading, I’m guessing due to AMD having competitive options from a multicore standpoint that Intel weren’t able to get away with having i5 and i7 chips with it disabled.

An improvement these 10th gen chips are including is a thinner die in order to help improve thermals, and given higher power levels will be needed to hit these higher clock speeds, that’s probably going to be useful.

As for Z490, it’s bringing us 40 PCIe lanes, up from the 24 that were on offer with the previous Z390, however unlike AMD who are offering PCIe 4.0, Intel are still using PCIe 3.0 with the 10th gen Comet Lake-S. While that kind of sucks from a future upgrade point of view, I suppose PCIe 4.0 devices are still fairly limited for the moment.

As for the PCIe lanes with the Z490 ACE motherboard I’ve got, MSI are claiming that it’s ready for PCIe Gen 4 support, so basically from a hardware standpoint it’s capable of supporting 4.0, but this will still only be possible if Intel decide to offer support with say future 11th gen processors.

Like we saw on the laptop side, the memory speed is moving to DDR4-2933 from DDR4-2666, though you can of course go higher with XMP profiles. The MSI Z490 ACE  apparently supports up to 4800 with overclocking, and up to 128gb of memory in total with the 4 available memory slots.

Speaking of overclocking, the Intel XTU software has been updated with some new features, including being able to enable or disable hyperthreading on a per core basis and enhanced voltage frequency curve controls. It’s interesting that the core voltage offset bar isn’t locked in their official image, so it may not be locked due to plundervolt.

2.5 gigabit ethernet is also making an appearance this generation, though I suspect support may come down to the specific motherboard rather than it just being globally used.

That said, all 10 MSI motherboards I have specs for, including this Z490 ACE all have 2.5 gigabit ethernet built in, the ACE also has a regular gigabit port too. While I think this is great, there still seems to be a big lack of 2.5 gigabit capable switches, so hopefully this move by Intel helps speed that along. I suppose 2.5 gigabit ethernet isn’t that useful to a lot of people, but I’d love to have it for my home network as I copy a lot of data around to test machines from my NAS, and gigabit ethernet is a huge limitation.

MSI are also adding Type-C support for all of these motherboards too, so you won’t get caught out like I did when I made my recent mini ITX build.

Anyway back to Z490, it’s using the new LGA 1200 socket, which is not backwards compatible with socket 1151 that was used for 8th and 9th gen processors.

This means 10th gen CPUs needs these new motherboards. While not ideal, this seems to be how Intel operates, at least when compared to AMD’s long AM4 socket support.

Desktop hardware aside, I’m extremely interested to hear what comes of the Alienware 51 m gaming laptop, as they said that it would be upgradeable as it supported a socketed 9900K processor. Based on this it seems like they’ll only be able to support upgrades if they also offered a replacement motherboard or something, so yeah that will be interesting to follow.

With the higher end MEG series boards from MSI like the ACE, we’ve got finned heatsinks, plus there’s a small fan in there as well.

The ACE also has three M.2 slots, each with 4 lanes of PCIe support, and all three have passive cooling.

The 3 PCIe 3.0 by 16 slots are reinforced with metal and support Nvidia SLI or AMD Crossfire. The top slot is wired to the CPU with 16 lanes, 8 lanes to the CPU for the second slot, and the bottom is 4 lanes via the PCH.

The Z490 ACE has nice selection of rear I/O too, including old school PS/2 port, two USB 2.0 Type-A ports, then for the more modern stuff, three USB 3.2 Gen2 Type-A ports highlighted in red, two USB 3.2 Gen1 Type-A ports highlighted in blue, the previously mentioned gigabit and 2.5 gigabit ports, the Type-C supports USB 3.2 Gen2 by 2 for up to 20gbps support, no Thunderbolt here, but the Unify and top end God like offer that if you need it. Finally, there’s the two antenna connectors for Wi-Fi and Bluetooth, followed by the audio connectors.

Unfortunately I haven’t been able to try it out yet as I’m still waiting to get my hands on 10th gen CPUs for testing. I also don’t have pricing at this time, but will add some links in the description once it’s available.

Let me know what you thought about Intel’s 10th gen desktop CPUs, Z490 or MSI ACE motherboard down in the comments, as well as what CPU comparisons you want to see once we’re allowed to share performance numbers.