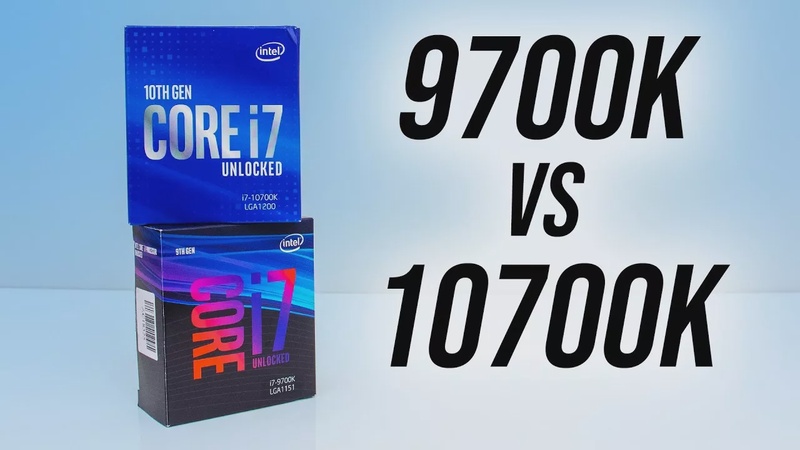 How does the new Intel i7-10700K processor compare against the older i7-9700K from last generation? Let’s see what the differences are in games and applications both at stock and while overclocked.

Starting out with the specs, both are 8 core parts, but the older 9th gen model doesn’t have hyperthreading.

The newer 10th gen option also has more cache, and slightly higher base and boost clock speeds, so we’re expecting it to do better, the question is by how much and which is worth it for the price?

Both processors were tested in the same system, but I’ve had to change motherboards as the 10th gen only works with the newer LGA1200 socket.

I’ve used the same Fractal S36 AIO with Noctua NT-H2 paste for both CPUs so we can do a fair temperature comparison, as neither come with a cooler.

Testing was completed with the same version of Windows and Nvidia drivers. With that in mind we’ll first check out the differences in various applications at stock, followed by overclocked results, power draw, thermals, then gaming tests at 1080p and 1440p resolutions afterwards.

In this test the 10th gen chip was just 3% faster when it came to single core performance, however the multicore score received a 35% increase, mostly as a result of hyperthreading.

I’ve also tested the older Cinebench R15 as a lot of people still use it, this time single core was around 8% faster with the 10700K, while the multicore score had a similar 36% gain.

This is another threaded test, so the 10700K was around 44% faster than the 9700K, again mostly due to the addition of hyperthreading.

Adobe Premiere was used to export  video at 4K, and I’ve used VBR 2 pass so no iGPU usage, and the 10700K was able to complete this task about 22% faster.

Premiere was also tested using the Puget systems benchmark tool. This tests more than just exporting such as live playback, and there was a 17% higher score with the 10th gen processor.

I’ve also tested the warp stabilizer effect in Adobe Premiere which is a less threaded workload and is used to smooth out a video clip, and there was the smallest difference out of all applications tested, with the 10th gen processor just a couple of seconds faster.

Adobe Photoshop was another that was tested with the Puget Systems benchmark tool. The 10700K was reaching a 10% higher score here, this test seems to depend more on clock speed than additional cores, which explains why it’s not as high as the other multicore tests.

VeraCrypt was used to test AES encryption and decryption speeds, and this test saw the biggest differences out of all apps tested. The 10700K was performing encryption operations 63% faster than the 9700K, while decryption was 56% faster.

The V-Ray benchmark uses the processor to render out a scene, and as a threaded test it’s a pretty big win for the 10700K which was scoring 36% higher than the 9700K.

That said, the Corona benchmark also uses the processor to render out a scene, though there was a much bigger difference here, with the 10700K completing this heavily threaded task 57% faster.

In the Hardware Unboxed Microsoft Excel test the 10700K was winning once more, completing the large number crunch test around 44% faster than the 9th gen option.

The difference to single core performance with Geekbench was similar to other single core workloads tested, with the 10th gen processor scoring 6% higher, but then in multicore it was 18% ahead of the 9700K.

In every case the 10700K is ahead, which makes sense, it’s better in every way, though we can see there’s far less of an improvement to the single core heavy workloads which litter the bottom of the graph, meanwhile multicore workloads see far bigger gains due to the addition of hyperthreading.

I’ve also done some tests with both processors overclocked to 5.1GHz on all 8 cores at 1.35v. These are the results in Blender with the stock results at the bottom and overclocked results above, and overclocking can save a few minutes in this task.

Likewise these are the results in Cinebench

and we can see the improvement this made to single core performance, though the 10700K was still scoring better there despite both running solid at 5.1GHz.

When we look at the total system power draw from the wall with the blender test running, the 10700K is using more power as expected, though once both are overclocked to the same speed the 10th gen chip seems to need more power to sustain this.

Here’s the package power as reported by hardware info

and like we saw in the power draw just before the gap widens with both overclocked.

Higher power draw typically results in more heat, and even with my 360 AIO we’re getting up to 81 degrees Celsius with the overclock in place on the 10700K, though to be fair this is by no means a finely tuned overclock.

so the 10700K has a 100MHz higher all core turbo boost, but I could run both at 5.1GHz no issues, this will of course depend on silicon lottery however.

Let’s get into the gaming results next, I’ve tested 12 games at both 1080p and 1440p resolutions, we’ll start with stock results then look at overclocked, average differences and cost per frame afterwards.

Battlefield V was tested running through the same section of the game in campaign mode.

I’ve got the 1080p results down the bottom, and the 1440p results above. In this game there were huge gains with the 10700K in terms of 1% low performance, the differences to average FPS were far more minor comparatively.

Assassin’s Creed Odyssey was tested with the games benchmark tool, and there’s much less of a difference here, basically margin of error results in most instances at either resolution.

Call of Duty modern warfare was tested in campaign mode, and the differences were a little strange here, with the 10700K coming out behind in all instances, so I’m guessing this game may not particularly benefit from the additional threads.

Borderlands 3 was tested using the games built in benchmark, at 1080p the 10th gen chip was almost 6% faster than the 9th gen chip, then when we stepped up to 1440p the difference was only 1 FPS or so.

Control was tested by performing the same test pass through the game on both machines, and as a seemingly GPU heavy test there wasn’t much of a difference here either, with average FPS just 2% faster on the 10700K at 1080p.

Red Dead Redemption 2 was tested using the games benchmark tool, and there was a 5% gain to average FPS at 1080p, which while not sounding much puts this game at 3rd best improvement with 10th gen, then at 1440p where the processor typically matters less there’s essentially no difference.

Shadow of the Tomb Raider was also tested with the games benchmark tool, so no 1% low data here unfortunately. Although the 10700K was 5% faster at 1080p, strangely it was slightly behind at 1440p. It was just a couple of FPS difference, but the results were consistent.

CS:GO was tested using the Ulletical FPS benchmark, and this game saw the largest improvement out of all 12 titles we’re looking at here. At 1080p the 10700K was around 10% faster in average FPS, and 5% faster at 1440p, with far smaller differences noted in the 1% lows.

The Division 2 was tested using the games benchmark tool. There seems to be more change in the 1% low performance, which was 7% higher on the 10700K, but then when we look at average FPS there’s less than a 1% difference, margin of error stuff realistically.

The Witcher 3 was another that saw no major differences, though like shadow of the tomb raider the average frame rate was down a little bit while running at 1440p.

Ghost Recon Breakpoint was tested with the games built in benchmark, and although the 1% low was ahead with the 10700K, the average FPS was down a little, but again it was only a small amount, no major differences here.

Far Cry New Dawn was also tested with the games built in benchmark, and this saw one of the larger differences out of all games tested, with the 10700K 5.5% ahead of the 9700K in average FPS at 1080p, and almost 8% higher at 1440p, the biggest change at that resolution.

As you can see, the results really vary by game, and some were seeing worse performance with the 10th gen processor, though for the most part it was offering some gains.

When we step up to 1440p though, the 9700K is winning in more games than not, the 10700K is only slightly ahead on average as those large far cry and cs:go results are keeping the score up, so at the end of the day it doesn’t appear that hyperthreading matters much in most games once you have 8 cores, the exception seems to be battlefield 5 which saw big gains to 1% low performance.

Either way, when compared to the applications tested earlier, the difference in gaming was far less significant.

Now for some overclocked gaming results, in Far Cry New Dawn it was possible to get a small boost

There wasn’t much change in Assassin’s Creed Odyssey either, just a 2-3 FPS boost for each processor.

Let’s discuss pricing, this is a little difficult. The 9700K can be picked up for $372 USD on Newegg. Interestingly the KF without iGPU is currently more expensive, so we’re not going to consider that, but it’s worth keeping an eye out for if you don’t need the integrated graphics. The 10700K is kind of a rip off at the moment due to a lack of availability, I could only find it for $545 USD which is pretty crazy. The price Intel sells the chips in quantities of 1000 is supposedly $374, so with these numbers here’s how the dollar per frame values look in the games tested.

I doubt the 10700K is going to be anywhere close to its 1000 quantity price, I just have no idea what else to use without guessing $400 or so. The current 10th gen price is clearly crazy and it’s definitely not worth paying so much more for the 10700K in gaming, which was only 3% faster at 1080p on average. If you already have a 9700K, you’re pretty well set for gaming already and there’s no need to upgrade.

Outside of gaming though, the 10700K makes much more sense, granted at the same time if multicore is your thing you’d probably be better off looking at Zen 2 instead, but that’s a story for another comparison. Even if you did want to upgrade, don’t forget that going from 9th to 10th gen requires a new motherboard as Intel are using a new socket.

Anyway if I was buying today, the 9700K is offering much better value if you’re just gaming, though you would be buying into an older platform where your only possible upgrade is to the 9900K, which given it has hyperthreading it kind of makes it like a 10700K. Hopefully things change as the price on Intel 10th gen improves, though I’m not sure when this will happen as it all depends on availability. Let me know which CPU you’d pick and why down in the comments, Intel’s new i7-10700K or will you stick with the older and currently better value 9th gen option?