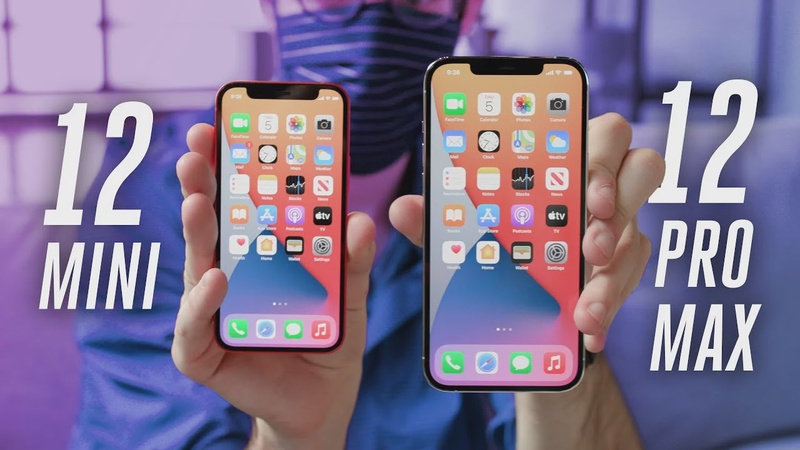 If you've seen the iPhone 12 already it's basically that, but smaller, same Processors, same cameras, same design, same everything, but instead of the iPhone 12 6.1 inch display the 12 mini has a 5.4-inch screen. And don't let those numbers fool you, while that screen may sound bigger than say the 2020 iPhone SE or the iPhone eight, Apple's actually made a much smaller phone because it's shifted to that no bezel design that introduced the iPhone 10, the result of something that's really small by the standards of a 2020 flagship.

The mini is also Apple's cheapest 2020 iPhone, it starts at $729. Compare that to last year where the default cheap iPhone, the iPhone 11 cost 699, that was with a 6.1-inch screen. If you want an Apple smaller phone which again was still a 5.8-inch screen, you had to shell out a thousand dollars for an iPhone 11 Pro so what's it like to actually uphold and use an iPhone 12 mini?

Well, it's nice, it's a small iPhone, it still fits really nicely into your hand, the hardware is great, the screen looks great, it's just smaller. It's honestly a bit weird to hold it first.

But despite the smaller size, all the software still looks normal because again, Apple hasn't actually put a smaller screen on here, it's a bigger screen compared to those older sizes, it's just a smaller body.

There are some things that do take some adjustment especially if you're coming from bigger iPhone. Things like typing on a screen that's this small, at least comparatively, definitely it's going to take some getting used to, but on the flip side, there're some things that are really nice like swiping down from the top of the screen to get to control center your notifications, which you can actually do with one hand without having to like, stretch your thumb all the way across the screen. It's delightful and it's honestly hard to go back to doing that even on a full sized iPhone 12.

But the first time since the iPhone six, Apple has made what you can arguably call a one-handed iPhone again that almost anyone should be able to comfortably use without having to juggle it between two hands. There are some concerns, the smaller screen and smaller size means that Apple has by necessity put in a smaller battery and with 5G and the OLED panel and everything else, there's definitely going to be some concerns here that you could see lower battery life.

On literally the other end of the spectrum is the iPhone 12 Pro Max which with a 6.7-inch screen is the biggest iPhone that Apple has ever made.

This thing is big, it is really big. Honestly, if you look at it side-by-side with the 12 mini, it's almost hard to believe that these are basically at their core, the same phone. Unlike the 12 mini, which was basically just a smaller iPhone 12, the 12 Pro Max does have one big difference between it and the regular 12 Pro. Apple is taking advantage of the bigger size to introduce a brand-new camera system with a much bigger main sensor and a new telephoto lens.

Given how good the iPhone 12 and 12 Pros' camera is that's really exciting.  As for how big the 12 Pro Max is to actually pull the news, look, I'm a big guy, I have big hands, and it is hard for me to hold this phone and reach the top corners. It's a surf board. It can be a little deceptive if you see it on its own because proportionally, it just looks like an iPhone, but if you see it next to say a smaller iPhone you can immediately see just how big the 12 Pro Max is.

The 6.7 inch display though, does look really good I mean, it's a huge OLED screen so it's great for watching movies or YouTube videos. And despite the big size, it's not overly heavy, I describe it more as a comfortable solidity. That said between the size and the steel frame you also definitely don't want to like drop it on your head while watching a video in bed either.

The other thing is that Apple's just still not doing much to take advantage of the big size.  Unlike most super-sized Android phones, there're still no way to run apps side-by-side on iOS. iOS 14 has a new picture in picture option, but it still feels like Apple's just scratching the surface here.

Right now though, it's basically just a regular iPhone, that's just been scaled up to giant Proportions. Apple's new design language for the entire iPhone 12 lineup does help the iPhone 12 Pro Max slim down a little too. The squared off designs help it fit much more comfortably in your hands and the very grippy and fingerprinty stainless steel makes it easy to at least hold.

The iPhone 12 Pro Max is a really big iPhone and at a hundred dollars more than the regular one, if you like big iPhones especially with the new camera system, assuming that pans out, then there's Probably a lot to like here. With this year's iPhones, it's starting to feel that Apple has settled that the iPhone 12 is its new default for iPhones, which means that phones like the 12 Pro Max, the 12 mini are outliers for people who want a smaller or bigger device. But that means that this year there's more choice than ever before, and more choice is always a good thing.