Lenovo C340 Review - Should You Buy A Chromebook? 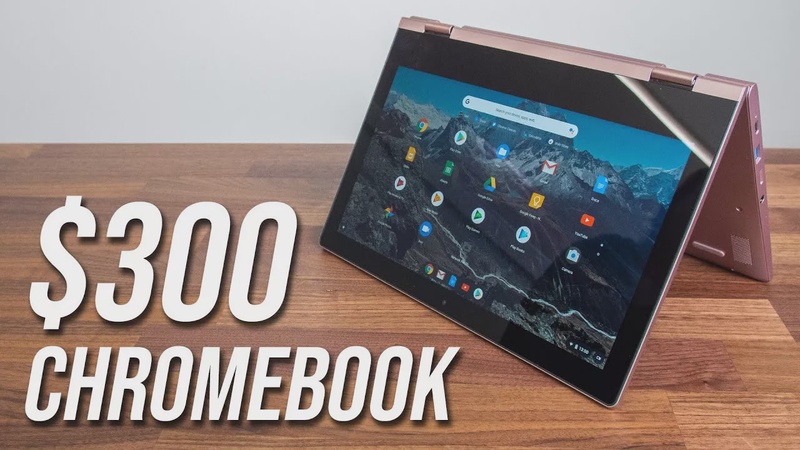 The Lenovo C340, a $300 2-in-1 Chromebook, but is it something you should consider buying? I’ve covered well over 100 Windows based laptops, but this is the first Chromebook I’ve ever tested, so I’m going into this as a first time user of ChromeOS.

My C340 has a dual core processor, 4gb of RAM and 64gb of local storage, so definitely significantly lower specs to what you’d see compared to most Windows laptops, and this is one of the reasons the prices are much lower.

Fortunately, ChromeOS doesn’t need much power to run. It’s a lightweight Linux based operating system from Google, so you log in with a Google account and get access to plenty of web based applications in the cloud, however you can also install Android apps through the Google Play Store too.

In any case the hardware seems to be enough, as the overall experience was quite good. I didn’t have any issues during normal use, swapping between multiple applications was fine and video playback was smooth. Lower hardware has the advantage of being able to fit into a smaller machine, and the C340 is definitely quite portable.

Battery life was also quite good given the size of the battery, and that’s probably in part due to the lightweight operating system.

I’ve got the sand pink version here, but you can also get it in platinum gray. I found the build quality of the C340 quite good, despite the plastic exterior it felt quite solid, with minor flex to the keyboard as well as the screen. Although there’s a little wobble when touching the screen, it’s no more when compared to say a more expensive Microsoft Surface Book 3.

The 11.6” IPS touch screen has a 1366 by 768 resolution, and at this size I thought it looked ok, I could only start noticing the pixels if I got in closer than where I’d normally sit. The bezels around the sides are quite thick though, but this has an advantage. When using it in tablet mode it’s easy to hold without accidentally triggering clicks around the edges, something I’ve found with thinner bezel devices.

I found it a bit painful to hold in tablet mode as the corners near the hinges dig into your hands, but if you only hold it from the sides, or alternatively flip the whole thing the other way it’s fine.

As a glossy screen fingerprints will show up, but that’s just the nature of a touch screen, I thought it looked ok, but the 250 nits of brightness was a little dim. The screen was surprisingly responsive when drawing, I’ve had more delay in some far more expensive Windows machines.

There’s a 720p camera above the screen in the middle. I found the keyboard ok to type with, I thought the size and layout were fine given the smaller 11” size. It’s nothing special though and doesn’t have any backlighting. The touchpad actually took me by surprise, I’ve had far more expensive Windows laptops that were worse. It clicks down anywhere and works well.

On the right from the front there’s the power button, volume up and down control for when in tablet mode, another 3.1 Gen1 Type-A and C port and lock slot.

The C340 uses Type-C charging, and you can charge from either the left or right side, and both of these ports also offer display output.

The top lid has Chrome and Lenovo badges, and the bottom just has the speakers towards the front.

They sound ok, nothing special, but I didn’t think they were as terrible as others were making out. Even in tablet mode, they’re blocked behind the screen, but still usable.

The rubber feet on the bottom panel weren’t very grippy, so it was pretty easy to slide around on a desk with minimal amount of force.

You can get inside easily by removing 9 TR6 screws, but there’s not really any real reason to, memory is soldered to the board and only the Wi-Fi 5 card appears to be user replaceable. Honestly at the end of the day, I could easily use this device as my daily driver while travelling, you know, once that’s allowed again.

I use Google Docs to script my videos, Google Drive to store files, Gmail for email, and obviously YouTube, so for short trips where I still want to get some work done but don’t want to take a larger and heavier more capable laptop with me, this is seriously looking like a good option with a much smaller price tag. It really comes down to your workload and use case though, if you need some applications like say Adobe Premiere for video editing, well you’re probably going to want to stick to a fully fledged Windows or MacOS machine with higher tier specs to do that sort of heavy lifting, but for what I personally do when travelling, a Chromebook like the C340 would easily have me covered.

This is why Chromebooks are so popular in schools, they’re offering core functionality at a much lower price point. With the rise of cloud computing and gaming services like Google’s Stadia, you’re able to get more and more done with lower tier hardware as time goes on.

Ultimately the reason I personally didn’t go with a Chromebook was that I was happy to pay more money for an even smaller and lighter machine with the option of Windows should I need to run other programs, but that’s just me. I’d argue most of what people do these days takes place through the browser or apps that are available in the store, so a Chromebook will do well for less money.

Anyway let me know what you think about the C340 and Chromebooks in general down in the comments, I’m interested to hear how popular they are with my laptop audience.