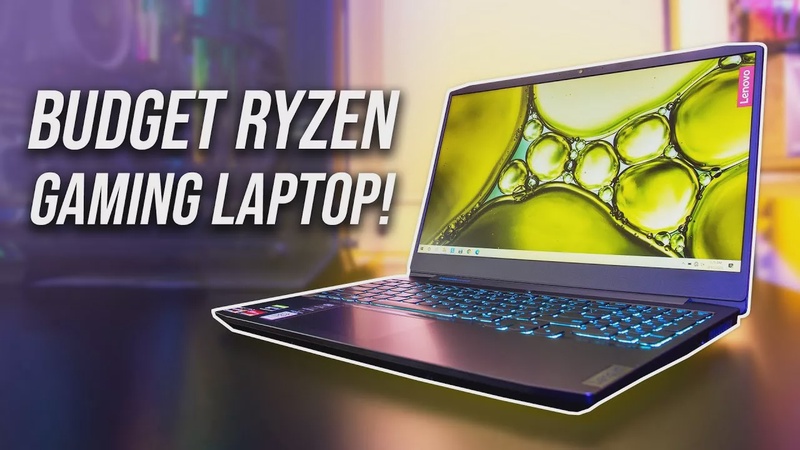 The Lenovo IdeaPad Gaming 3 is a budget friendly gaming laptop with a lot to offer for the money. Mine has the 6 core Ryzen 5 4600H processor with Nvidia GTX 1650 Ti graphics, but there are other configurations available including Intel based.

It’s got an all black plastic build. There’s definitely some flex due to the plastic, but build quality feels better than the cheaper Nitro 5 I recently tested.

We’re looking at under 4.8lb or 2.2kg for the laptop alone, then right on 6lb or about 2.7kg total with the 135 watt power brick and cables included.

The size is decent for a 15 inch gaming laptop, not super thin or anything, but not huge and still portable. This smaller footprint allows for 6mm thin screen bezels on the sides. It’s got a 15.6” 1080p 120Hz display, and it’s got FreeSync with a 60 to 120Hz range which is nice to see.

I’ve measured the screen's average grey-to-grey response time at around 15ms, ideally we want to see 8.33ms for a 120Hz panel like this.

Unfortunately I haven’t had too many other 120Hz laptops for testing, but it is at least faster than the 120Hz screen in the ASUS G14.

Backlight bleed was fine even in this worst case test, just some minor glow patches that I never noticed when viewing darker content, but this will vary between laptops.

There’s a 720p camera above the display in the middle with a physically sliding privacy shutter, no Windows Hello support.

The keyboard just has a single zone of blue backlighting which illuminates all keys and secondary key functions. It’s got two levels of key brightness or can be turned off with the function and space keys. Personally I preferred typing on it over the Nitro 5, the keys were a bit more clicky with 1.5mm of key travel. I like that the arrow keys aren’t small and instead are pushed down a little to make space. The power button is separate from the keyboard, it’s just above it in the middle.

The precision touchpad is a smooth plastic, it clicks down anywhere and worked fine. Fingerprints and dirt show up pretty easily on the matte black finish, but as it’s smooth it’s easy to clean with a microfiber cloth.

The right just has a USB 3.2 Gen1 Type-A port and air exhaust vent, so no cables getting in the way if you’re a right handed mouse user.

The HDMI port connects straight to the Nvidia graphics. The Type-C port does not offer display output, and Type-C cannot be used to charge the machine. The weight distribution was good, allowing for one finger opening, and by default the laptop will power on when you open the lid, but you can disable this through the Vantage software.

Underneath has some air intake vents towards the back above the fans. You need to take out 10 Phillips head screws to get inside, and the four down the front are shorter than the rest.

Once inside we’ve got the battery along the front, 2.5” drive bay above on the left, two M.2 storage slots, WiFi 5 card in the center, and two memory slots to the right. This model I bought in Australia shipped with 16gb in dual channel, but the US one just lists 8gb, so it could be single channel.

Although the SSD installed is a smaller size, there’s room for a longer drive, but the 2nd slot only fits the smaller option. The two 1.5w speakers are on the left and right sides towards the front. They sounded ok, I’d rate them about average, no bass and a bit tinny, better than the Nitro 5 though. They’re not super loud at maximum volume, but loud enough, and the latencymon results were alright.

The IdeaPad is powered by a 3-cell 45Wh battery, I’ve tested it with keyboard lighting off, background apps disabled and screen at 50% brightness.

The results were quite good considering the size of the battery, lasting for more than 6 hours in the YouTube playback test. Beating Lenovo’s L340 from last year with the same battery two spots below.

Let’s check out thermals next. The Lenovo Vantage software lets you pick between three performance modes, which from lowest to highest are quiet, balanced and performance, but there’s no user fan controls. None of these modes applied any overclocks to the GPU, and I didn’t find the Ryzen Controller software to make any performance improvements in the higher performance mode.

The idle temperatures were good with a 21 degree Celsius room, stress tests were done with the Aida64 CPU stress test with stress CPU only checked and the Heaven GPU benchmark run at the same time, while gaming was tested playing Watch Dogs 2. With the stress tests running, quiet mode is the warmest due to lower fans, then balanced is a fair bit cooler, completely acceptable. Performance is only a little warmer as it performs better, but still under 90 degrees on the processor, then the cooling pad helped lower temps a bit more. Interestingly when gaming in quiet mode the temps are way down.

This was because the GPU seemed capped to 300MHz, so the game was basically not playable, I’d write off playing in quiet mode entirely due to this. Otherwise best case we’re looking at almost 4GHz over all 6 cores sustained long term for the CPU.

We can see this in the power levels the components are running at, quiet mode with the game running is way down, again basically unplayable, so not sure why the stress test workload was unaffected. Outside of that, the 1650 Ti had no problems running at its 50 watt limit.

Here’s how CPU only performance looks in Cinebench with the GPU now idle, so not too big of a boost going from balanced to performance.

however the Nitro did benefit from Ryzen controller, at stock it was around 200 points lower, so purely out of the box the Lenovo does perform better in multicore workloads.

When idling the keyboard was around the low 30 degree Celsius point which is pretty normal.

With the stress tests running in the lowest quiet mode it’s approaching the 50s on the left, WASD felt fairly warm.

Balanced mode was a little cooler, probably due to the fan speed increase

then in the highest performance mode it’s pretty similar, warm but not hot, and we can see the hot air exhausting onto the screen on the right.

I could hear the fan and hard drive at idle, quiet mode does what it says on the box, then balanced and performance were about the same, and were quieter when compared to a lot of other gaming laptops I’ve tested in the highest performance mode.

Now let’s check out how well the IdeaPad Gaming 3 performs in games and see how it compares with other laptops.

I’ve tested Battlefield 5 in campaign mode at ultra settings, and the IdeaPad is highlighted in red.

Interestingly it’s a fair bit behind the ASUS TUF A15 with the same CPU and GPU combination two spots ahead of it, this is only my second 1650 Ti laptop though so not too much else in the way of direct comparison yet, but at least it is above all of the 1650 results.

This time the IdeaPad was ahead of the TUF, so it could just be a bad result in BF5. It’s also beating the 5500M in the Alpha 15, granted that machine does also have the much worse 3750H processor, otherwise it’s a bit of a jump up to the next tier, being the 1660 Ti Max-Q.

The TUF with the same CPU and GPU was a couple of frames ahead, so nothing major, but still it’s ahead in two of the three games we’ve compared, at least in terms of raw gaming performance anyway. Speaking of a couple of frames, that’s the same amount the IdeaPad was ahead of the cheaper Nitro 5 with 1650, so not all that different.

If you want more results, I’ve tested the IdeaPad Gaming 3 in 22 games at all setting levels.

Now for the benchmarking tools.

I’ve used Adobe Premiere to export one of my laptop review videos at 4K. This test benefits from quicksync from the Intel machines which is why the IdeaPad is one of the lower results here, though interestingly the cheaper Nitro 5 with lower 1650 was a little faster.

I’ve also tested Premiere but with the Puget systems benchmark which also accounts for things like live playback rather than just export times.In these tests a higher score is better, and the IdeaPad was again slightly trailing behind the lower specced Nitro 5, but was a little ahead of the TUF A15 with the same CPU and GPU.

The results were similar in Adobe Photoshop, this tends to be more of a CPU focussed test, but it’s now a fair bit behind the TUF A15 with same specs, while the Nitro is even higher.

DaVinci Resolve is more GPU heavy, but despite the apparent benefit of the Ti being a higher spec, it’s scoring the same as the lower Nitro 5, and only just 5 points behind the TUF with the same hardware.

I’ve used Crystal disk mark to test the 256gb NVMe M.2 SSD, the speeds were alright but nothing amazing.

The 1TB hard drive seems to have decent speeds for a 5,400RPM spinning rust drive.

As for prices, in the US it’s actually sold out, too much demand for Ryzen I guess. Here in Australia we’re looking at $1400 AUD, though I picked mine up on sale for under $1150 AUD, which without our taxes is around $750 USD for my international friends. The Intel model is in stock in the US for $800 USD, though just a quad core i5 there.

Now let’s summarise the good and bad parts of the IdeaPad Gaming 3 to help you decide if it’s a gaming laptop worth considering. Overall I think there’s a lot of value here for the money, but that said, in many games the performance isn’t all that much different compared to the $670 Nitro 5 with non Ti 1650, so paying the extra for the Ti alone doesn’t seem worth it. The screen in the IdeaPad is a little better, higher refresh rate and faster response time, but colour gamut and brightness is similar and on the lower side. The IdeaPad does have FreeSync though. The plastic build quality is a little better here, but still pretty average and I did prefer the keyboard of the Lenovo.

Thermals are good, but that’s just a side effect of the specs not being high powered. It doesn’t run hot and performs good in any case. Battery life was good considering the smaller battery size, and that seems to be a side effect of Ryzen, as most Ryzen gaming laptops I’ve tested do well here.

Speaking of Ryzen, the CPU performance on offer is next level here compared to what was available at this price point less than a year ago. It’s good to see that Lenovo are giving us two memory slots for dual channel memory now, as the older L340 it replaces only had the one, so all things considered I think the IdeaPad Gaming 3 is a solid improvement over the L340, but it’s hard to say if the benefits are worth around $70 or so over Acer’s Nitro 5, especially if you’re on a tight budget, in that case the Nitro might be the way to go depending on your needs. Let me know what you thought about Lenovo’s IdeaPad Gaming 3 gaming laptop down in the comments, is it something you’d consider?