Linux This Month: A Christmas Kernel, CentOS 6, and SUSE rumors 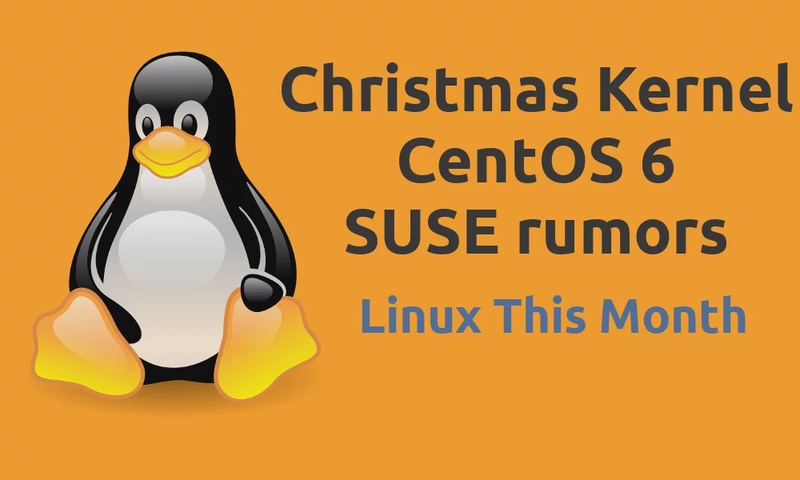 Today we'll be discussing some of the things that have been happening this month in the world of Linux and the ecosystem of open source that it lives in. We'll start off with some seasonal holiday news, talk about some anniversaries and some end of life events. We'll drop a tip about how to try even more distributions than before. And then we'll cap things off for the very interesting SUSE related rumor.

The kernel that stole Christmas

In our first item is the Linux kernel The Grinch that will steal Christmas this year? Linus Torvalds. Yes, that guy who invented Linux. He worries that version 5.10, the kernel won't stabilize until just before the Christmas holiday season kicks off. We all know that everything business-related slows down to a crawl over the holidays, perhaps it's all the Turkey tryptophan and the spiked eggnog were guzzling.

If you're a developer or a tester for the Linux kernel, Hey, get cracking and get Linus what he needs the finish before the holiday season kicks in. The guy deserves a break. And so do we all.

In our second item, it might be hard to believe, but the GIMP is 25 years old. Now the brain child of Peter Mattis and Spencer Kimball. The general, or now GNU Image Manipulation Program is an absolute mainstay of the open-source graphics world. It is essentially the anti-Photoshop package that most distributions include.

The GIMP has gotten me personally through almost 25 years of not having to buy or subscribe to Photoshop or any other commercial tool. And while I'm not the most sophisticated user, there are times when I can really appreciate the power and the ease of use the GIMP has in equal measure. Little known additional factoid, the GTK user interface toolkit. These two student authors came up with for this project, went on to be incredibly important in the development of the GNOME and Xfce desktop environments. Just to name a couple of famous projects, talk about unintended consequences.

CentOS 6 goes into end of life

And now for some sad news, CentOS 6 is going into end of life on November 30th, 2020. All good things must eventually end nd this means that as of November 30th, there will no longer be any more security updates or bug fixes for the CentOS 6 distribution.

CentOS 6 was with us for over nine years and has seen a lot of widespread adoption with CentOS cresting as high as 30% of all Linux web servers being run. So long CentOS 6, thanks for all the fish.

And speaking of the CentOS world CentOS 7 has some snazzy new microcode package updates that address a recent security issue. So get those updates installed right away after making sure they work on your systems and without breaking your change management policy. Of course, after all, there are two types of system operators, those who avoid system patches and fixes because they're often problematic and the rest of us who just go ahead and go through the and hassle of system testing and make sure things will go as smoothly as possible. It's kind of like your approach to duct tape on a hairy arm or a leg. Some of us will rip it right off in one moment of agony. Others will pull it off hair by hair. It's a matter of choice and style.

And now for another anniversary this year marks the 50th anniversary of the Open Invention Network, which was formed to keep Linux and open-source projects and companies safe from the patent trolls and the enemies that had been after them since Linux was invented. Many of you may not remember, or even have been around to hear proprietary software company executives calling Linux a cancer or the rise in the common usage of the phrase, FUD or Fear, Uncertainty and Doubt. Oh, and how about the general screaming and yelling of the mini proprietary software and some hardware vendors about how Linux was unsecure full of bugs and totally unproven in the enterprise. It causes cavities in sunspots, blah, blah, blah.

But here we are 15 years later and now even Microsoft is heavily into Linux tools and services who knows someday windows might just be an add on module for a Linux based operating system from the big M.

Quick poll. How many distributions of Linux have you installed either physically or as a VM virtual machine and how many have you booted up from live CD? Right. I can't even begin to estimate how many for me and I suspect many of you are the same way. I first booted Linux in 1994 with a very early version of Slackware I downloaded diskette images for. So you can see where the numbers are lost in the mists of memory. So if you're tired of installing distro after distro, like I am, you should try out distrotest.net where you can find out over 1300 versions of the latest distros and try them all out, all online, either in a browser or over VNC. The site lets you get hands-on with distros. So you can see if you like them or not before even downloading an ISO or a container image of them.

The team says they'll add anything to the system you request. So head on over and see what they have. And if they don't have your favorite distribution, put your version request in now.

According to sources like Bloomberg, the private equity firm that owned SUSE EQT. Is preparing for an initial public offering rumor to be worth over $6 billion. Why would you invest in SUSE? Does anyone even use them? Of course they do. SUSE is number one in supercomputers. It's got a huge footprint in mainframe Linux and a vast majority of the SAP systems out there run on SUSE Lennox enterprise. So there's is also a huge player in the cloud world, innovating in containers, hybrid cloud and software defined storage. Full disclosure, I have worked for SUSE twice in my, as a Trainer in a Sales Engineer and as a SUSE Certification Architect. And let me tell you SUSE features great support, excellent engineering, and is a great bunch of folks, all working hard to win us as customers. I, for one, can't wait to see what happens with this.