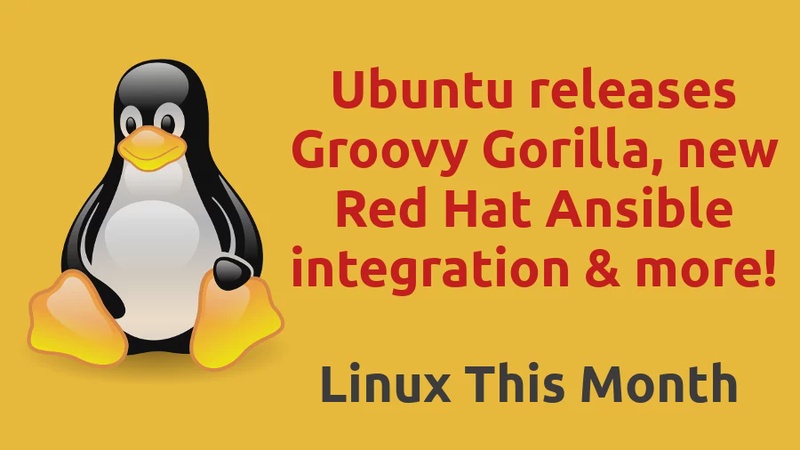 In this last month, Ubuntu has released the Gorilla and OpenShift and Ansible have become best friends. Before we dive into those topics. Let's take a look at this month's noteworthy news.

First up this month, it seems like there is a lot of news coming out of Redmond about the work that Microsoft is doing to be more compatible with Linux. This time Microsoft has released their edge browser for Linux. This means that if you're working in an enterprise, that specifically requires the use of the edge browser, you now have the option of running it from a Linux workstation.

Linux Kernel 5.9 that was just released a few weeks ago, has its first point release and is now marked as stable. This release brings upgrades to the Btrfs file system and allows for rescue mount among other improvements. This release addresses some vulnerabilities that have been available as patches in previous versions of the kernel. If you were in the market for a kernel upgrade, now's the time.

Steam releases Proton 5.13 making even more titles Linux-compatible. This is great news for gaming on Linux. As some of the popular titles that you might've been waiting for can now be played. Valve, on their Steam platform have made huge strides in getting gaming titles playable on Linux. And if you're a gamer thinking about making the switch, check the steam platform out and see if your favorite game is supported.

Python 3.9 is now available. This is the first update since October of last year. This update brings many enhancements, such as updates to Unicode support as well as correcting some memory leakage. If you're waiting for Python 4.0 The news is that this is not the last planned release for Python 3, and the next version will most likely be 3.10.

That's a quick tour around the world of open source.

Let's move over to our info pages and take a deeper dive into some announcements and releases that make a difference in the core Linux world. Canonical has released Ubuntu 20.10 Groovy Gorilla. This is not an LTS release and only has a nine month support site. This means that if you need the LTS version, you need to stick with 2004 that was released earlier this year.

This release sees the inclusion of the 5.8 Kernel as well as improvements to Btrfs RAID support, USB 4.0 Support and improved thermal control. Additionally, updates have been put in place to the default installs for several included tool packs, such as OpenJDK11, Ruby 2.7 and Go Lang 1.13. This should result in fewer post-install updates to get the latest versions of your favorite tools installed. Groovy Gorilla should look better as well as it's been updated to the latest version of GNOME, or 'guh-nome' or 'nome'.

Anyway, it's the first release that features the desktop images for Raspberry Pi.

The challenge of managing hybrid clouds is there's different tool sets that are required to configure the environment with this integration. The tool set is streamlined with the Kubernetes operator being used for cluster management and Ansible being leveraged for tasks that are outside the cluster. This should make the job of configuring multi-cloud and hybrid cloud container environments much simpler. Currently this is in technology preview and as it nears maturity, it will be exciting to see how it's implemented.

That's all for now.