A Korean meal typically consists of a bowl of rice, bowl of soup or stew, vegetables and side dishes. Korean love to add vegetables to their diet, in fact because of Korea’s agricultural conditions it is abundant in vegetables such as peppers, carrots, cabbage, lettuce and cucumber that is why Korean meal has high vegetable content. There are different Korean vegan dish to choose from. In this post, we have gathered some of the most popular Korean Vegetarian dishes. 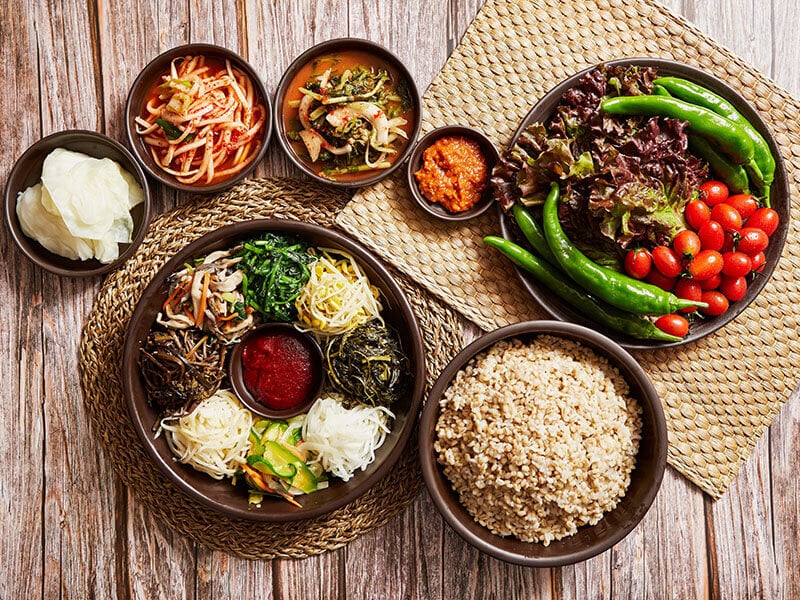 Bibimbap is the most popular vegetarian Korean food. It is a rice dish that is made from sautéedvegetables, sauce and some protein rich vegetables.

Bibimbap bowl is a rice bowl that is topped with different types of seasoned vegetables, Kimchi, Gochujang or red pepper paste, meat such as Bulgogi (usually a marinated beef), and with an fried egg cooked as sunny side up.

To finish the dish, it is then sprinkled with sesame seeds and Bibimbap sauce.

Kimchi Pancakes are also called Kimchi Buchimgae or Kimchi Jeon. These are savory pancakes that is made using Wheat flour, seasonings and of course, Kimchi.

A Korean dish that’s easy to make and considered to be an all-time favorite Korean dish. It is hot, crispy, spicy but a little sweet with a hint of sour and salty flavor.

Another delicious Korean vegetarian dish is the Crispy Korean BBQ Tofu. It has a sweet and savory taste. It is smoky and meaty too.

Crispy Korean BBQ Tofu is seasoned with Gochujang sauce or red chili paste. Gochujang sauce has a sweet, savory and spicy taste. It is made from Gochu-garu (Korean chili pepper), Glutinous rice, Meju powder, salt and Yeotgireum (a powder with a sweet and malty flavor).

This vegetable dish is best to place on top of a bowl of rice then sprinkled with sesame oil, sesame seeds and scallions too.

Korean Braised Potatoes is also called Gamja Jorim. In Korea, Gamja means Potatoes and Jorim means braised and Al means egg (the size of the potatoes, like that size of a quail eggs).

Korean Braised Potatoes is also called Gamja Jorim. In Korea, Gamja means Potatoes and Jorim means braised and Al means egg (the size of the potatoes, like that size of a quail eggs).

If you are wondering why is this considered a vegetable dish in Korea. Well, Goguma latte is a beverage using sweet potatoes that are roasted or steamed, sugar and milk are added to it. The term Goguma means sweet potatoes in Korea.

It taste sweet and creamy that somehow give the latte its distinct flavor and taste. It is the most popular drink in Korean especially during winter season and fall.

Although the drink is called a latte, it does not actually contain any coffee. It has no coffee at all. There are different varieties of sweet potatoes skin such as having yellow flesh, purple and ivory skin.

Korean Coleslaw is actually a Korean Salad. The flavor is similar to that of Kimchi because of the dressings used such as carrots, onions and cabbage. It has a crunchy taste.

It is made from combining ingredients such as soy sauce, sesame oil, garlic and vinegar.

It is another Korean vegetarian dishes that is usually used as a side dish since it only takes less than 5 minutes to prepare. Goes well as a side dish to bento boxes and BBQ.

Sigeumchi Namul Bachan is a sides dish to Korean cuisine. It is made from using blanched spinach that is coated. Other ingredients combined includes soy sauce, sesame oi, sugar, garlic and sesame seeds.

Splendid vegetarian dishes In Singapore That You Can't Miss

Spanish Foods: The Most Popular Spanish Dishes To Eat In Spain

Most Popular Fashion Trend In 2022