I only recently tested the MSI Alpha 15 gaming laptop with Radeon 5500M graphics in November 2019, so 3-4 months ago, but it’s had some updates to improve performance and price drops, so let’s see what these changes have made and if its now worth considering. 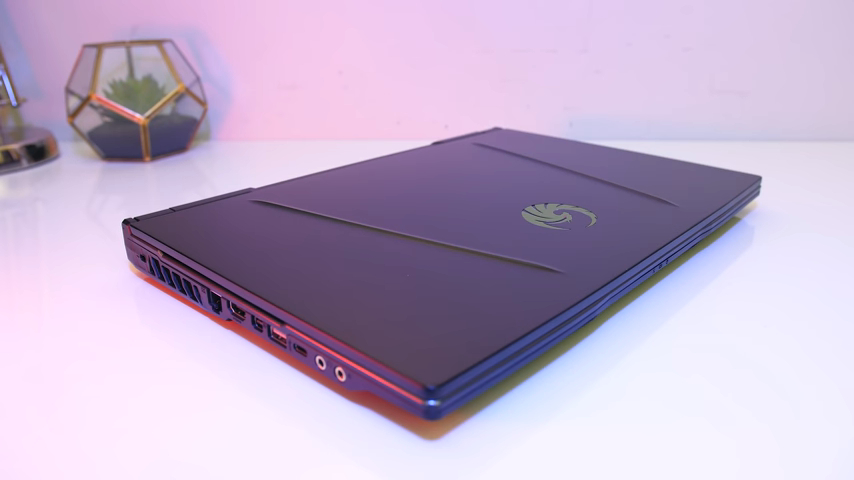 Alright so first off let’s discuss the price drop. When I reviewed the Alpha 15 last year it was $1000 USD for the cheaper configuration, or $1100 USD for the specs that I tested. This is the same price as the Acer Helios 300, which let’s face it, demolishes the Alpha 15. 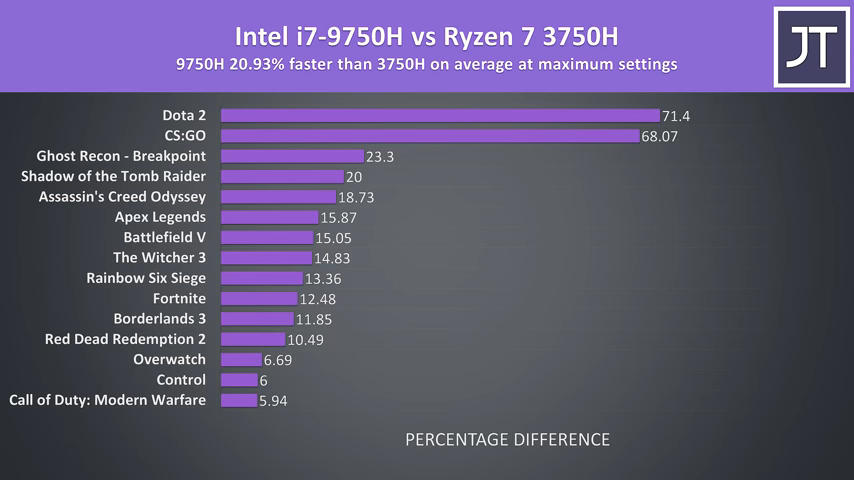 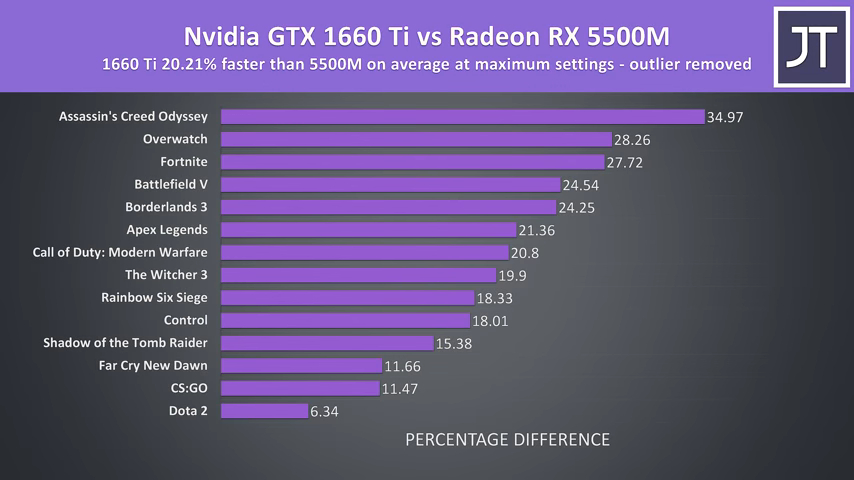 Today, the cheaper configuration of the Alpha 15 is $892 USD, or just under $1000 USD for the configuration I tested out, so basically a $100 price drop, but is this enough?

There’s more to consider, as the Alpha 15 has also undergone a number of updates. Since my testing last year, there’s been a VBIOS update for the 5500M, granted I have no idea what changes this did as the changelog did not specify. There was also a BIOS update, and an update to the EC firmware which the changelog notes “optimize CPU power limit”, and fan speed changes.

Additionally, AMD also launched the new Radeon 2020 software suite and improved drivers shortly after my original review. In my review, I noted that I had blue screen issues when updating the Radeon drivers to the latest from AMD. The 2020 update resolved this problem. I had a lot of comments asking if the new 2020 software update would improve performance.

We’re going to look at some game benchmarks before and after all of these updates soon, however I am not expecting the Radeon drivers to make a noteworthy performance change.

I recently had the chance to pose this question to Scott Wasson, who is a senior product manager for AMD. He basically said that updates that improve performance are trickled out through updates as they become available, they don't hold them all for a big update like the new 2020 driver suite, so basically we’re not expecting to see much improvement purely as a result of the driver updates alone. Hopefully with all changes combined, so Radeon driver update, VBIOS update, BIOS update and EC Firmware update, we’ll be seeing some form of improvements - let’s find out.

The configuration I’m testing with was the same in both instances, Ryzen 7 3750H CPU, Radeon RX 5500M graphics, and 16gb of memory in dual channel. 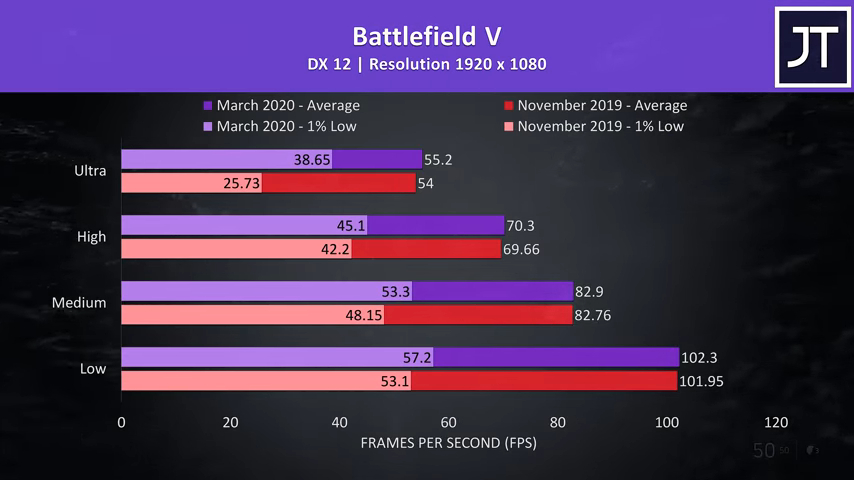 Battlefield V was tested walking through the same area of the game for each test. I’ve got the old results from last year shown by the red bars, and the fresh updated testing with all updates mentioned shown by the purple bars. The average FPS was quite similar, there was more of an improvement to 1% low performance with the updates though. 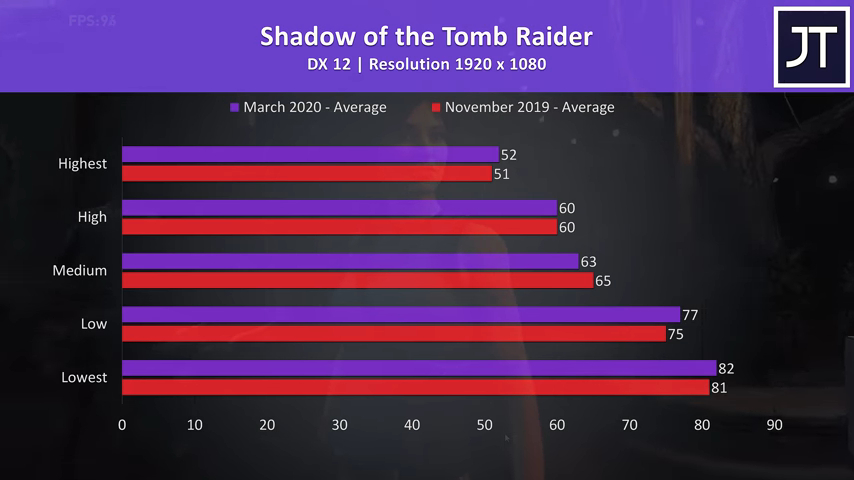 Shadow of the Tomb Raider was tested with the games built in benchmark tool, and for the most part the new settings were similar, slightly behind at medium, but otherwise equal or ahead at all other setting levels. 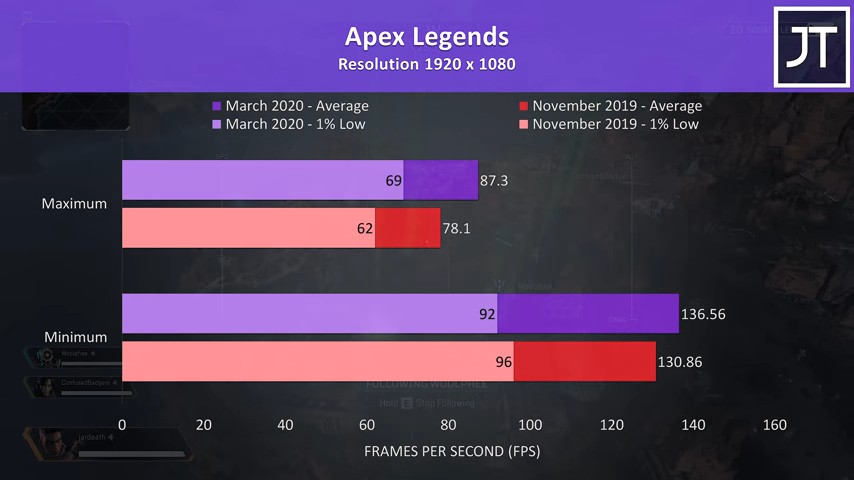 Apex Legends was tested running through the same section of the map, and the average FPS with the updates in place was a little ahead.

Assassin’s Creed Odyssey was tested using the games benchmark, and the average FPS was actually behind at all setting levels except maximum with the updates in place. 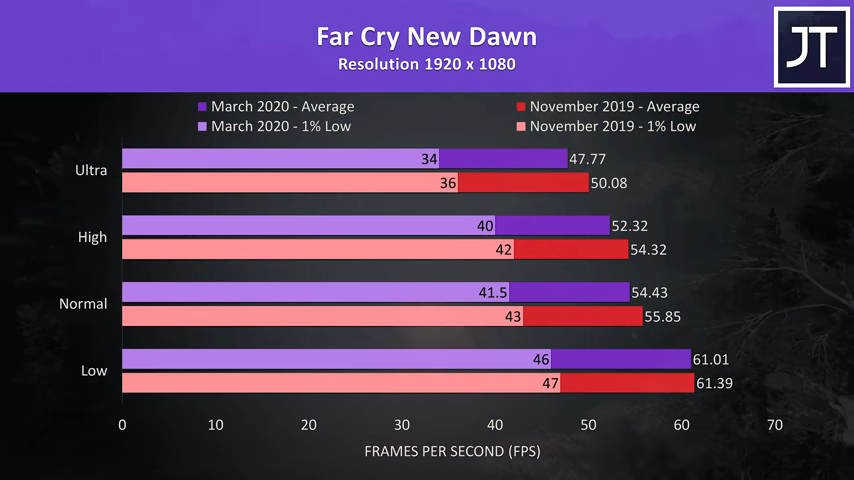 Far Cry New Dawn was also tested with the built-in benchmark, and again the new results were a little behind what I tested months ago. 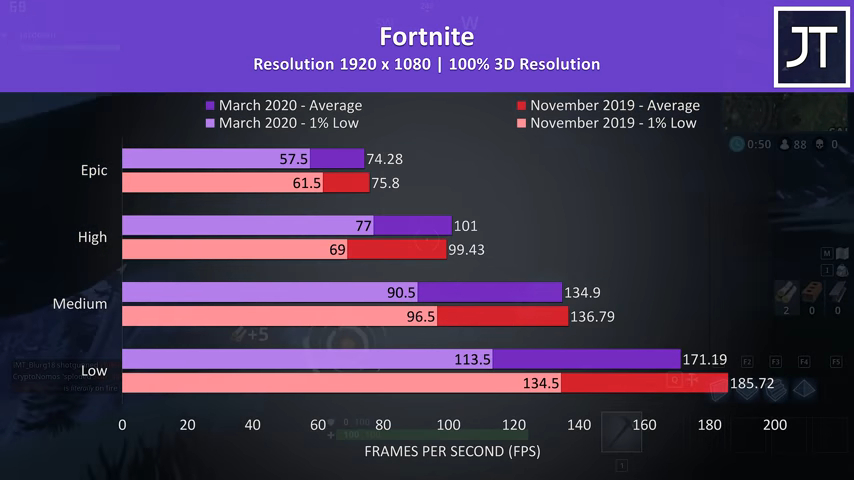 Fortnite was tested by doing the same test pass through the game. For the most part average FPS was similar, except at low settings where the updated Alpha 15 was notably worse off. 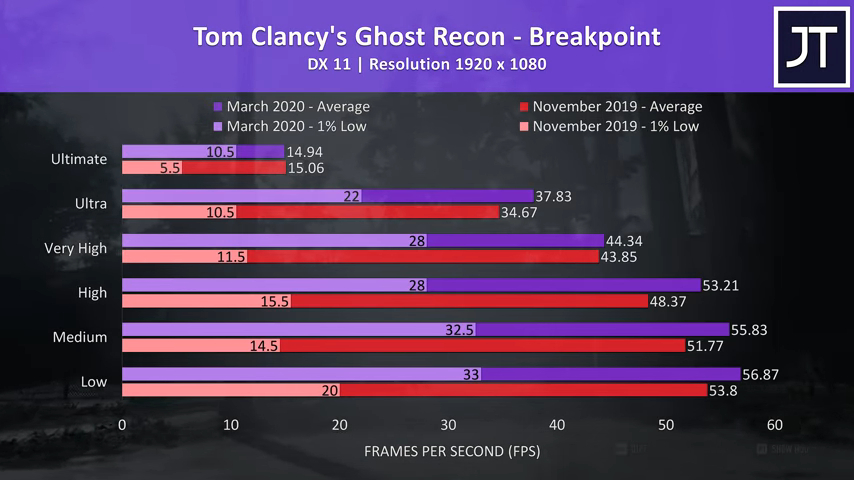 Ghost Recon Breakpoint was tested with the benchmark tool, and averages were either similar or better with the updated system, however there was a massive improvement to 1% low results at all setting levels, granted that could be due to a specific game or driver update as this was a much newer title when I originally tested the game. 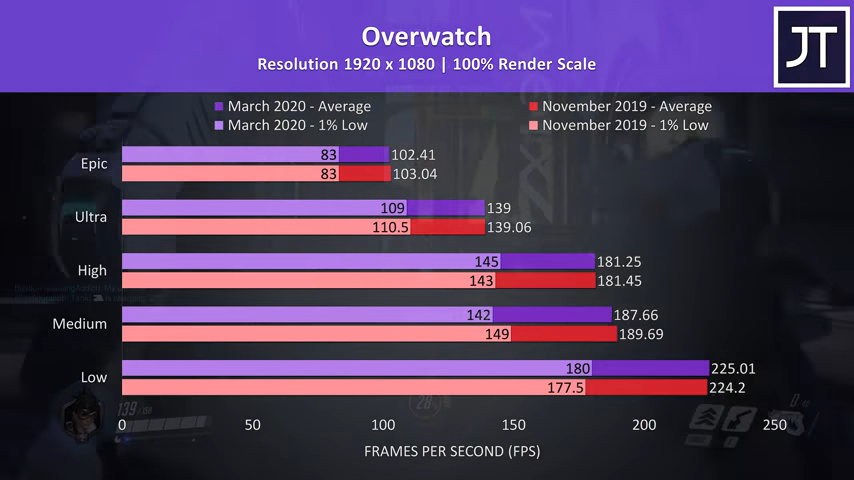 Overwatch was tested in the practice range, and the results were essentially the same in this game between the old and new config with minimal differences. 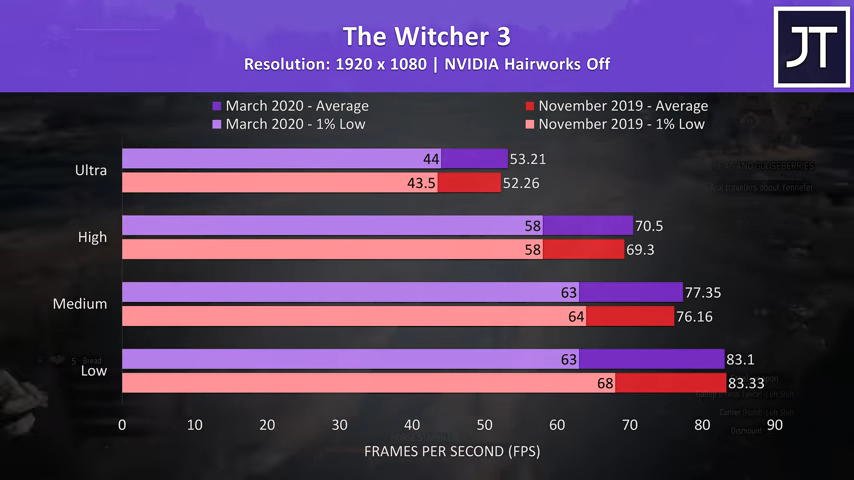 The Witcher 3 was tested by walking through the same section of the game, and again quite similar results, with the updated system a little ahead in average FPS at most settings. 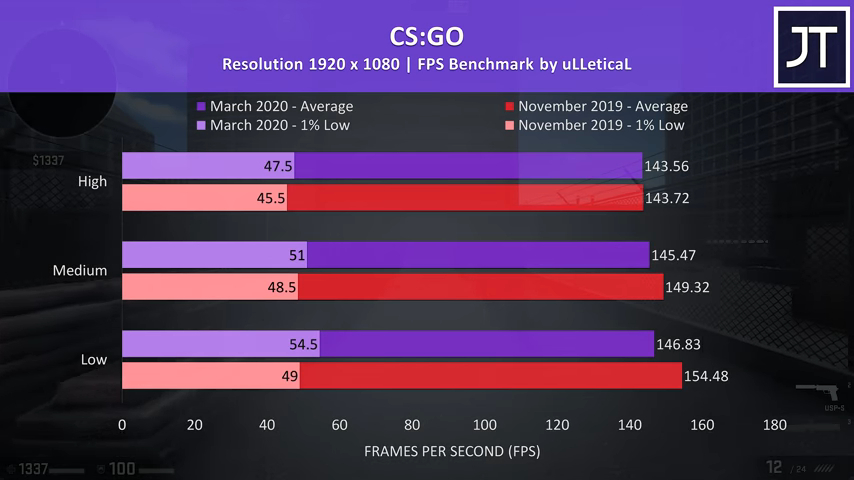 Performance in CS:GO was a little down in terms of average FPS, however there was a slight boost to 1% low at all setting levels. 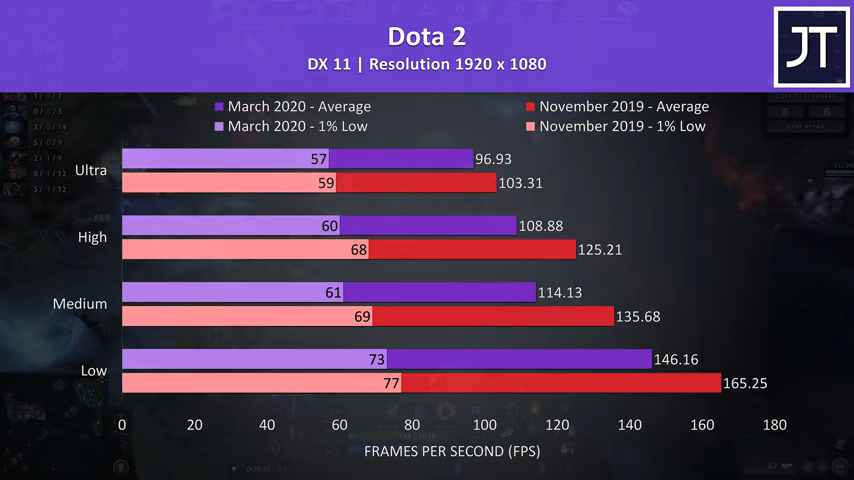 Dota 2 was tested playing in the middle lane, and the game was worse off in all regards with the updated system in place regardless of setting level used.

So as expected there were minimal changes in terms of improvements, though there were more games where performance was down a little than I expected, not really sure why that is.

I’m literally using the exact same machine as last year, just with all available updates in place. In the comments of the Alpha 15 video a couple of viewers linked me to a reddit thread that explains how to get to the advanced BIOS and overclock the memory. I tried it and was able to run at the DDR4-2666 speed my installed sticks are capable of rather than the DDR4-2400 default. 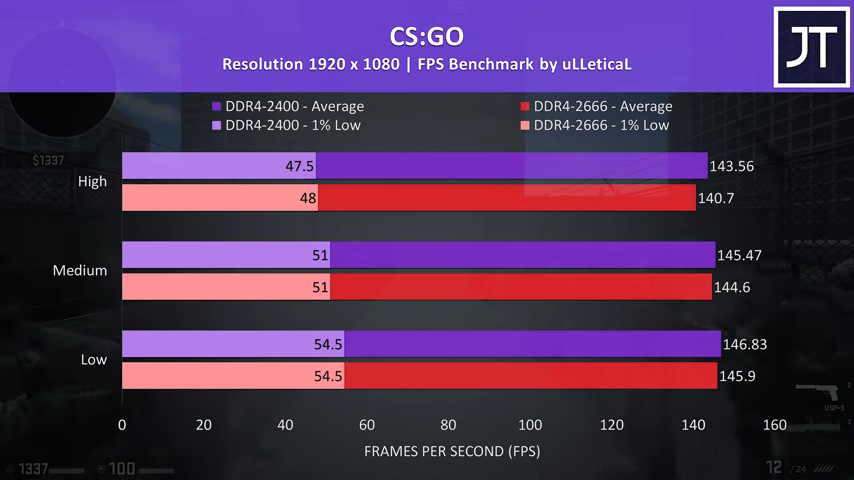 I only had time to test one game so went for something more CPU bound, we can see that with CS:GO there was actually a slight drop off with the higher speed, though the higher speeds did also have lower timings, more investigation is needed. I’ll also note that when testing with the latest Adrenalin 20.2.1 games were playing like trash 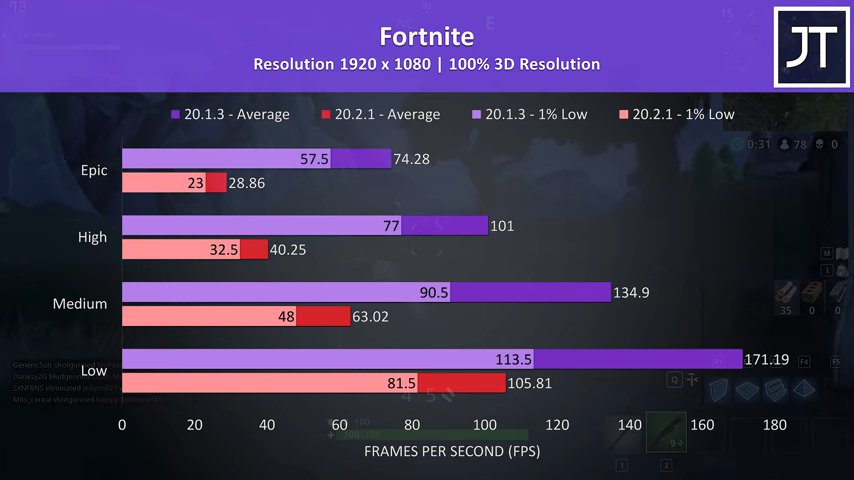 To be fair this was the optional version, when using the current stable 20.1.3 release I had no problems, but still, I feel like this is something that shouldn’t happen. Seriously the newer version tanked performance in everything I tried, maybe more testing is required before they release these. I ran DDU multiple times to confirm only the bleeding edge version had the issue.

This AMD only laptop is definitely still not perfect, although better than when I originally reviewed it, I was unable to even launch Red Dead Redemption 2, which is probably trying to open with Vulkan by default. Rainbow Six Siege also can’t seem to detect the 5500M when trying to run it with Vulkan, and instead runs on the Vega graphics.

To fix these I had to set both of them to high performance mode to ensure the 5500M would get used, so it seems that Vulkan titles still don’t automatically swap over to the discrete graphics.

While trying to load Ghost Recon Breakpoint for the first time gave me a blue screen, however it was ok after that. These issues were not listed in the known issues for the driver download. I guess what I’m trying to say is, these sorts of issues are much more rare on Intel and Nvidia based laptops from my own personal testing, it seems like driver stability could still use some maturity on the AMD slash Radeon side.

In conclusion, the newer drivers are more stable compared to the blue screens I reported in my full review, but there are still issues that need to be resolved. Even with the $100 price drop, it’s difficult to recommend the MSI Alpha 15 in this current state. When you can get a Helios 300 with i7-9750H which performs more than 20% faster in games when compared to the 3750H, while its 1660 Ti also performs about 20% better than the 5500M, it really seems worth it to pay 10% more money for that performance, and that’s before even considering the more stable driver experience.

Let me know what you thought of the changes to the Alpha 15 down in the comments, is it a laptop you’d buy going into 2020? Personally at this point I’d wait to see what the new 4000 series has to offer