The MSI MAG272CQR is a cheaper 165Hz 1440p gaming monitor that’s got a lot of value to offer, let’s check it out in this review and find out if you need to make any compromises for the lower price. 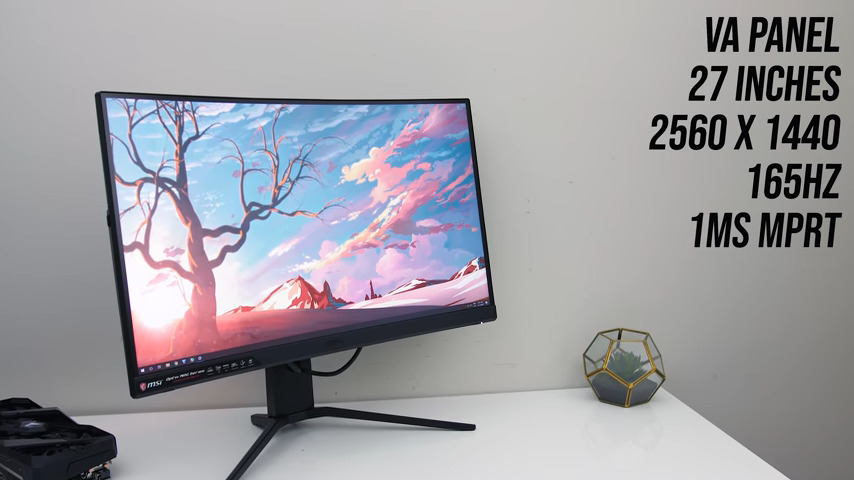 It’s got adaptive sync support too, so based on the specs it’s got quite a few features for gaming.

This is a curved monitor with a 1500R curve, I didn’t personally mind it, it wasn’t too aggressive for me. In order to run the monitor at 1440p 165Hz you’ll need to use DisplayPort. I confirmed the HDMI is limited to 144Hz, which makes sense as this is a limitation of the HDMI 2.0b specification.

I tested with both Nvidia and Radeon graphics, and found that my Nvidia RTX 2080 Ti would work with G-Sync compatible mode with DisplayPort, but not HDMI.

My RX 5700 XT on the other hand worked with FreeSync with either DisplayPort or HDMI, but you might as well stick to DisplayPort to get the full 165Hz refresh rate. With DisplayPort in use, the FreeSync range was reported as 48Hz to 165Hz. 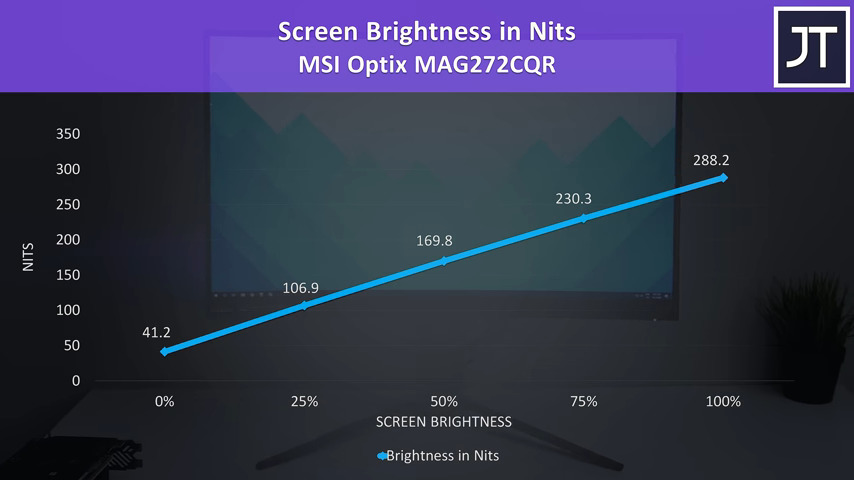 According to the specs it’s a 300 nit panel, however at maximum brightness mine was topping out at 288 nits with about half of the specified 3000:1 contrast ratio, but I tested with the default 70 out of 100 contrast in the settings, and this is still higher when compared to most IPS panels I’ve tested, as VA panels tend to have deeper blacks.

Just anecdotally while using it, I thought it looked pretty good for both gaming or some content creation, but yeah it did feel a little dim at times. 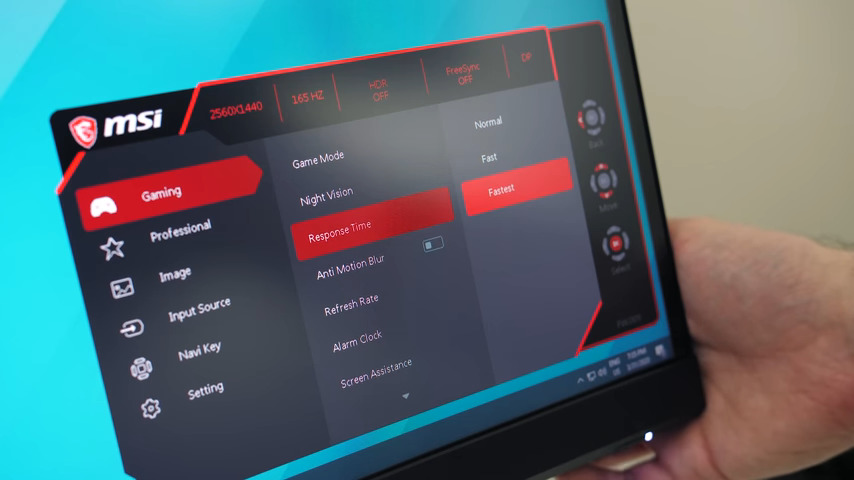 The monitor gives you three response time settings, normal, fast and fastest. If we look at normal with the UFO test, it honestly looked pretty bad, which I suppose is one of the downsides with VA panels.

After changing to the fast response time setting it improved a little, then I thought this test looked better still with the fastest mode. Still though, it did seem suboptimal when compared against other monitors that I’ve tested, but to be fair those others are also more expensive too.

There’s also an anti motion blur option, however I can’t say I found this to help too much here, though it does introduce some flicker. 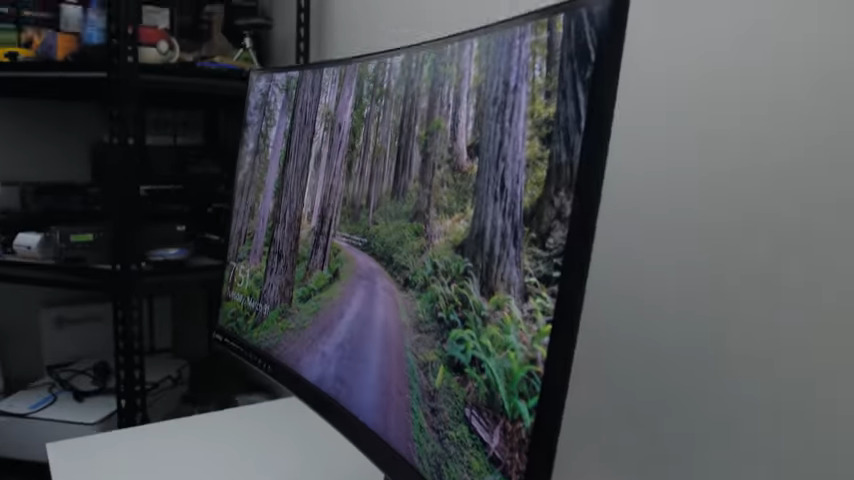 The bezels aren’t too thick, I measured them at around 9 mm on the sides, but I honestly can’t say I really care too much as I hardly notice them once I get into a game, but that would be more of an issue if you have more than one side by side though. 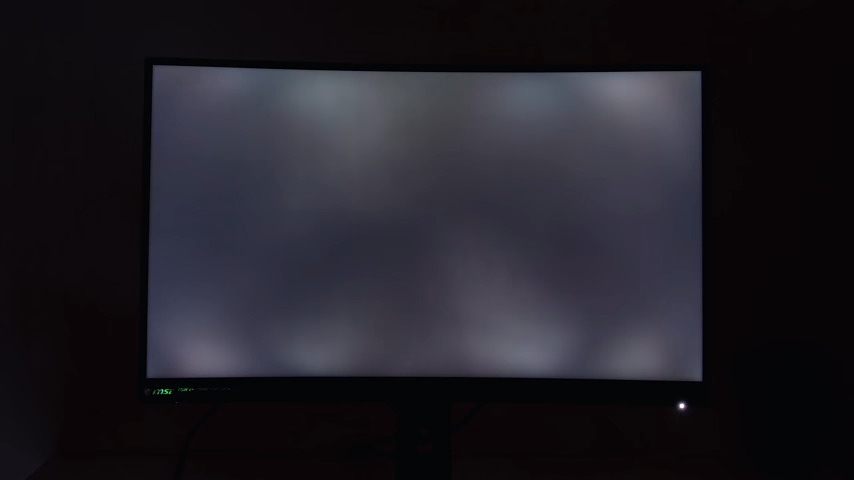 There was some backlight bleed, mainly some glow towards the top and bottom which was only really noticeable when viewing dark scenes, but this will vary between panels. 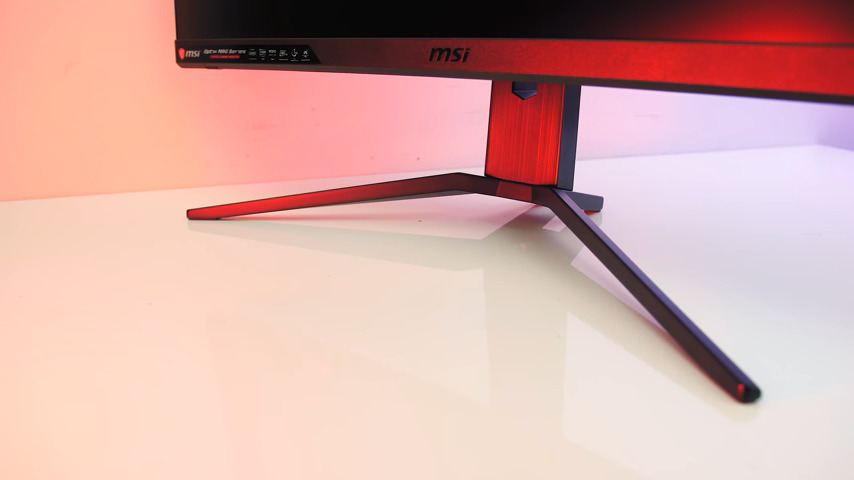 It’s not all just about the panel though, the stand feels fairly solid and has a matte black metal base and brushed plastic stand.

In terms of adjustments we’ve just got -5 to 20 degrees of tilt, and 0 to 13cm of height adjustment.

There is unfortunately no swivel or pivot available with the included stand, but to be fair I can understand why you may not necessarily want these motions with a curved panel. 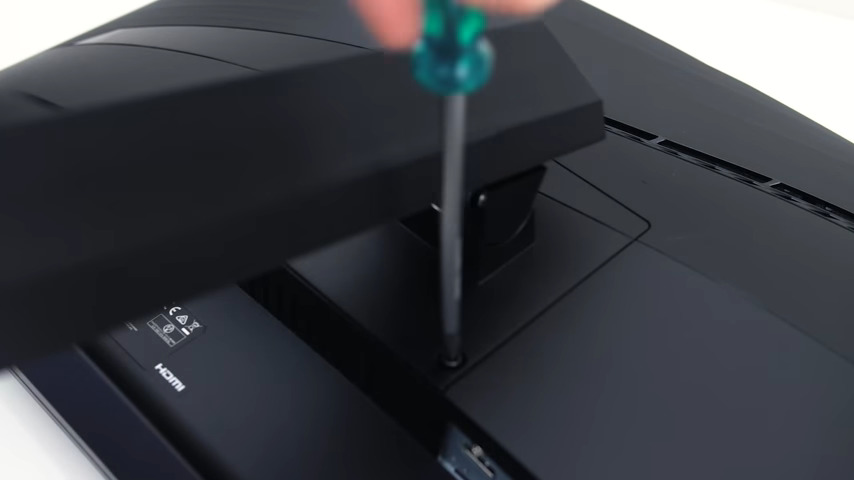 The stand connects to the back of the panel, and you’ve got to screw in two included phillips head screws down the bottom.

Behind the stand mount is a 100mm VESA mount if you want to attach the panel to a different stand or monitor arm. 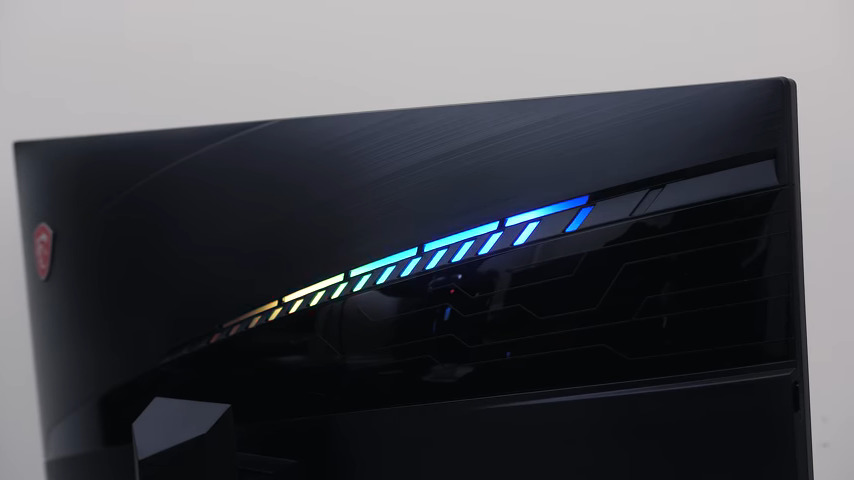 The back has an MSI logo up the top corner, and there’s also some subtle RGB lighting back here too, more on that soon. 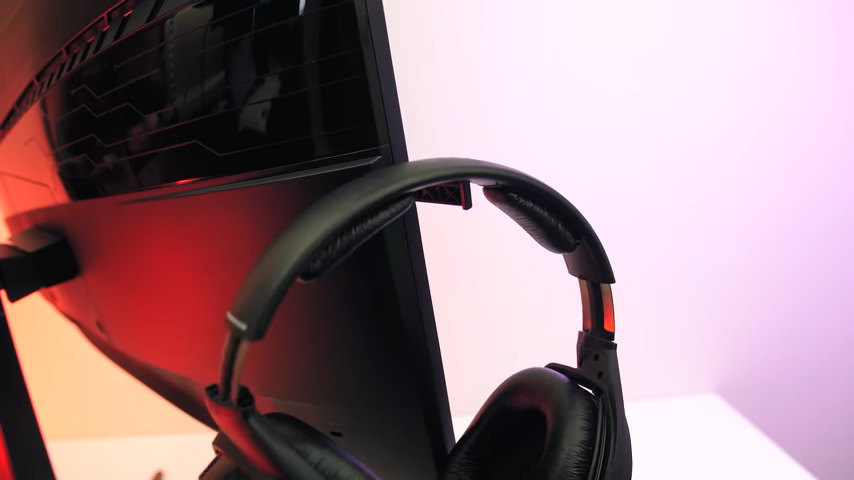 There’s a headphone holder on the left of the screen, you just push it in and it clicks out. It’s all plastic and feels a little loose, but it gets the job done. 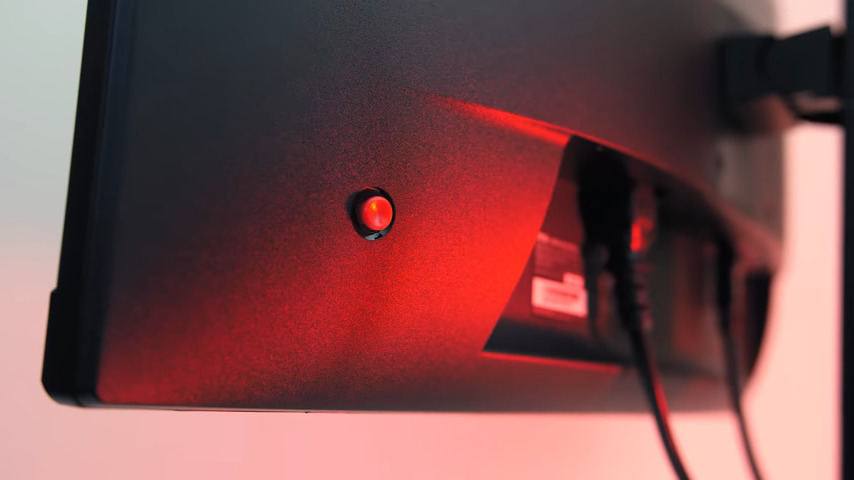 The back also features a Kensington lock towards the bottom on the right, no speakers here, and on the left, or the right once you’re sitting in front of the screen, there’s a single joystick for on screen display navigation which I had no problems reaching and using. 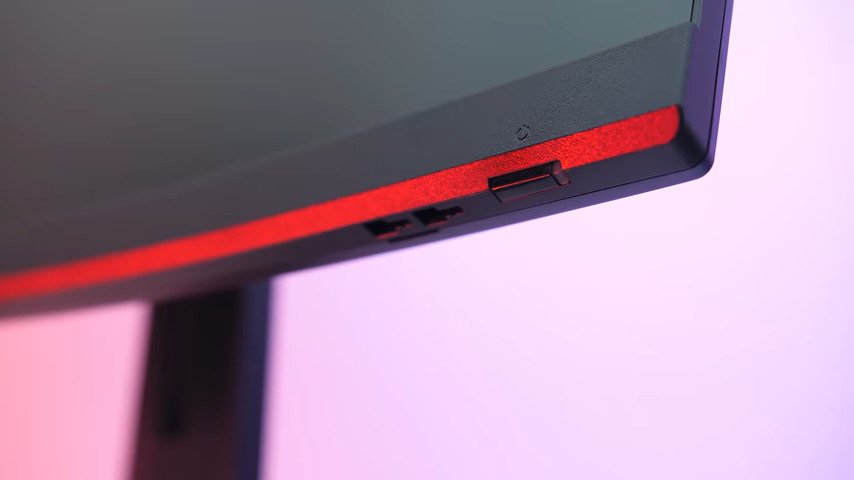 There’s a power button underneath the screen on the right hand side, and a macro key button on the left side. 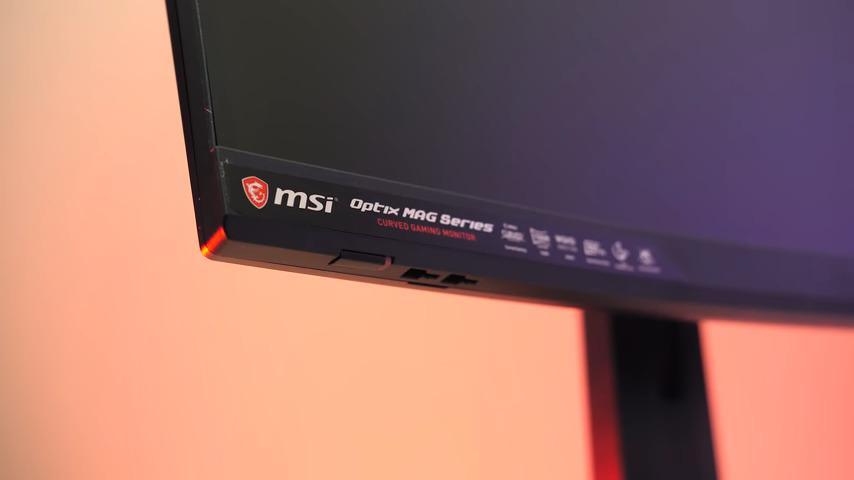 Speaking of the OSD, it was pretty easy to navigate through and there were your usual options available, including changing screen profiles, warm levels, brightness, contrast, response time settings, and of course the all important RGB disable for those who hate lighting.

The lighting was pretty subtle, even at night in a dark room I didn’t think it was too bright compared to others I’ve tested.

If you connect the included Type-B USB cable to your PC and download the gaming OSD software from the MSI product page, you can manage all of these settings and more through Windows with your mouse, which is much easier compared to using the on screen display and joystick.

There are some extras in the software including setting split window areas to snap applications to in Windows, the aforementioned macro key, and of course RGB lighting. You can control the lighting effects here and customize it a fair bit, at least more than the zero customization available through the regular OSD, all you can do there is turn it on or off.

The MSI website does a decent job of demonstrating the available effects. 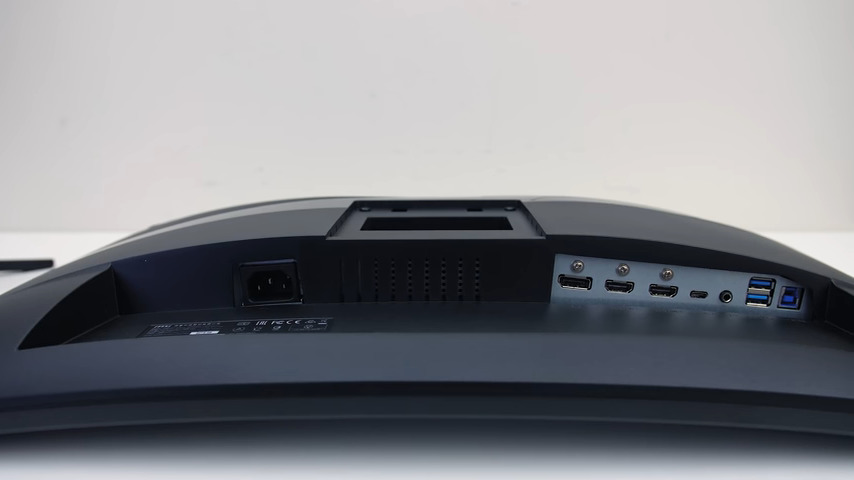 The I/O is on the back and faces down, there’s a power input on the far left, and no external power brick is needed as it’s built in. The rest of the I/O is on the right, and includes a DisplayPort 1.2a input which you’ll need to reach the 165Hz refresh rate, 2 HDMI 2.0b outputs, a Type-C input which supports DisplayPort and charging, a 3.5 mm audio jack for headphones, 2 USB 3.2 Gen1 Type-A ports which can be used as a hub once you connect the included Type-B cable, which is the final port on the far right. 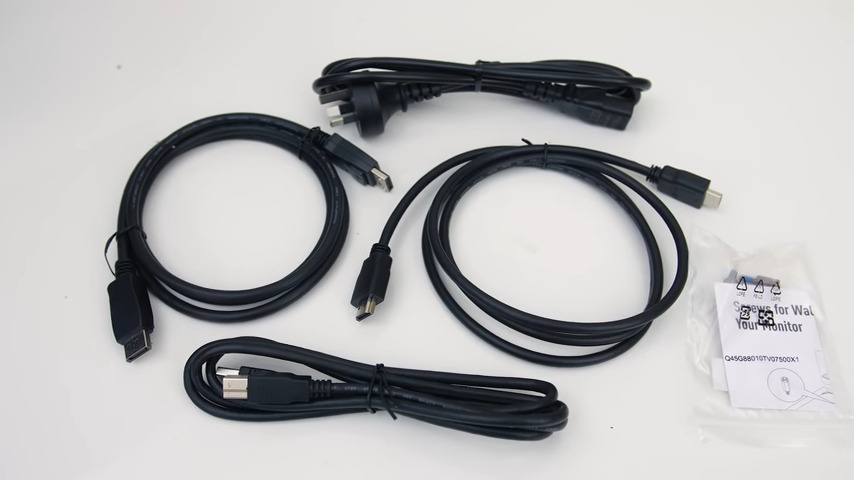 The cables included with the monitor are full size DisplayPort, HDMI, USB Type-B to A for the USB hub functionality and gaming OSD software, and a power cable.

There are also some additional screws for wall mounting the panel. So far the monitor looks decent for the price, ghosting and minor bleed issues aside, but how was it to actually use day to day? I normally use a 32” 4K monitor as my daily driver for video editing, so swapping to 27 inches (68.58 cm) at 1440p was a little downsize. Overall I thought it looked great in terms of colors and contrast, if a little dim at times.

When playing games that can actually run at high enough FPS to utilize the 165Hz panel, I thought they looked smooth for the most part. I don’t think I’m too sensitive to things like ghosting and motion blur personally, and while playing games it looked ok to me, a filthy casual, though as we saw in the UFO test it was much more obvious than what I thought was ideal. After some use the curve does grow on me and I get used to it, it’s a personal preference thing, but I think I prefer it once I’m used to it. When I go back to a regular flat screen it feels weird comparatively, like the corners are out of reach, but that’s just my experience.

Finally, let’s discuss pricing.  MSI Optix MAG272CQR goes for around $400 USD, so about $200 less compared to the similarly specced Viewsonic XG270QG monitor that I recently tested. I’d say the build quality of the viewsonic was better, and the IPS panel was better in terms of response time, but at 50% higher cost, the MSI option is still getting you a 1440p 165Hz gaming panel with adaptive sync.

Even the popular ASUS TUF VG27AQ costs more at $430 USD, though I haven’t tested that yet to compare with.

Let me know what you thought of the MSI Optix MAG272CQR gaming monitor down in the comments, and also let me know if you’re interested in seeing more gaming monitors, I’ve still got one more here to test out for the moment.