ASUS are refreshing their gaming laptop lineup with the launch of Intel’s new 10th gen processors and Nvidia’s Super graphics, let’s take a look at the new models and find out what’s coming.

Let’s start out with the ASUS Zephyrus Duo 15, because I thought it was the most interesting laptop out of the new machines. 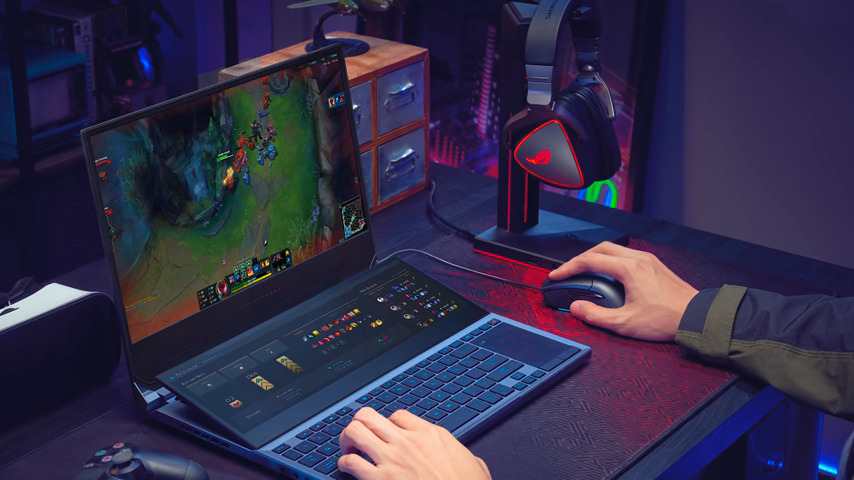 The idea behind this one is combining the best of both worlds from the Zephyrus lineup and the ZenBook Pro Duo, the laptop with two screens. What we get is a gaming laptop with a second screen. The lower screen folds up automatically when you open the lid of the machine. A comment a lot of people left on my review of the Pro Duo was that they’d want the screen to be angled more so it’s easier to see, and from these initial images it looks like that may be the case. 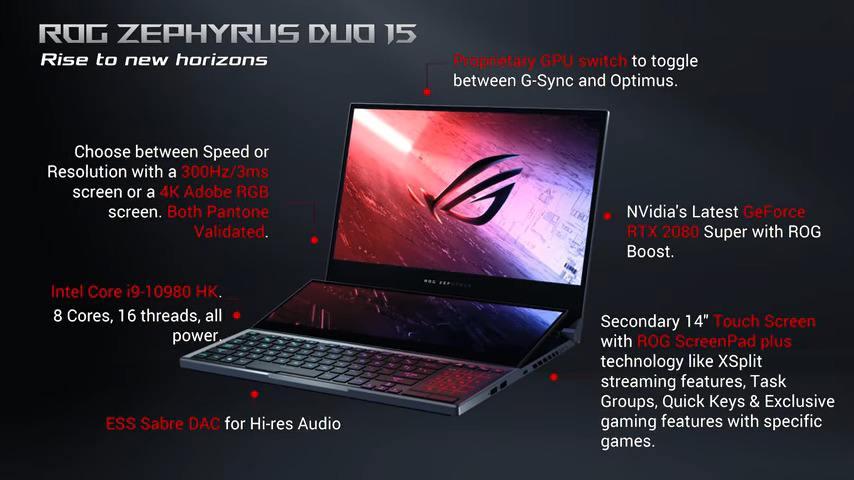 The secondary 14” 60Hz touch screen is apparently the same panel we saw in the Pro Duo. ASUS say they are working with various game developers so that different titles will better support this two screen setup.

If you recall from previous Zephyrus laptops, like the GX701, the back half above the keyboard is just all air intake vents and otherwise unused. The Duo 15 will pull air in below the second screen, and the gap is wider than the older hinge lift design so in theory better cooling, plus you of course also get the advantage of the extra screen real estate. As for the rest of the specs, the Duo 15 will be available with up to the 8 core Intel i9-10980HK processor and Nvidia RTX 2080 Super Max-Q graphics, quite the mouth full there.

It will be available with either a 1080p 300Hz screen, or 4K I’m guessing 60Hz but it wasn’t specified. The Duo 15 also has Thunderbolt 3 and Type-C charging, so sounds like it will be their top end option. It’s also listed as having an Optimus GPU switch, I’m assuming this is the new Nvidia advanced optimus feature, but wasn’t able to confirm if it is or just a standard MUX switch that needs a reboot.

Speaking of top end options, ASUS were asked if they’d be refreshing the mothership, they weren’t able to say at the moment, it sounds like they’re still considering it. ASUS said that all of their new 10th gen laptops, excluding the TUF F15 and F17, will use thermal grizzly conductonaut, so liquid metal, which is honestly pretty awesome and should greatly improve thermals. While cool, it really makes you wonder if the Intel 10th gen processors are just so hot that this has now become required, but I guess we’ll see when they arrive for testing.

ASUS said they perfected liquid metal application by machine with the Mothership, and were able to expand this process to this new generation, as application by hand simply isn’t scalable. 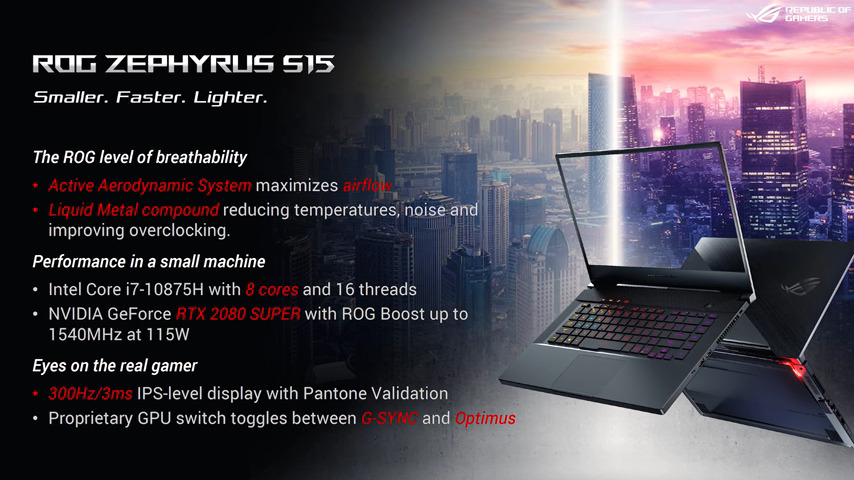 From what I can tell the design appears similar if not the same. Again both have liquid metal cooling, type-c charging and interestly Thunderbolt 3, which they were missing last generation. 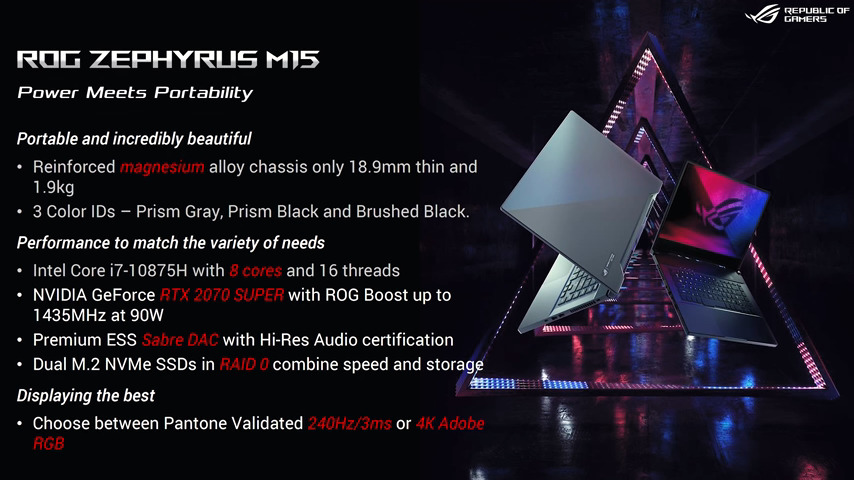 The ASUS GU502 is now called the Zephyrus M 15, again liquid metal cooling here too with up to 8 core i7-10875H processor, although the max GPU with this one will be RTX 2070 Super Max-Q. It will still get Thunderbolt 3, Type-C charging, however no switch to disable Optimus here as was the case with the earlier models.

There are some different lid options available which have a subtle colour change effect.

Next up there are the Strix Scar 15 and 17, which seem to just replace the Scar III and I guess Hero III. 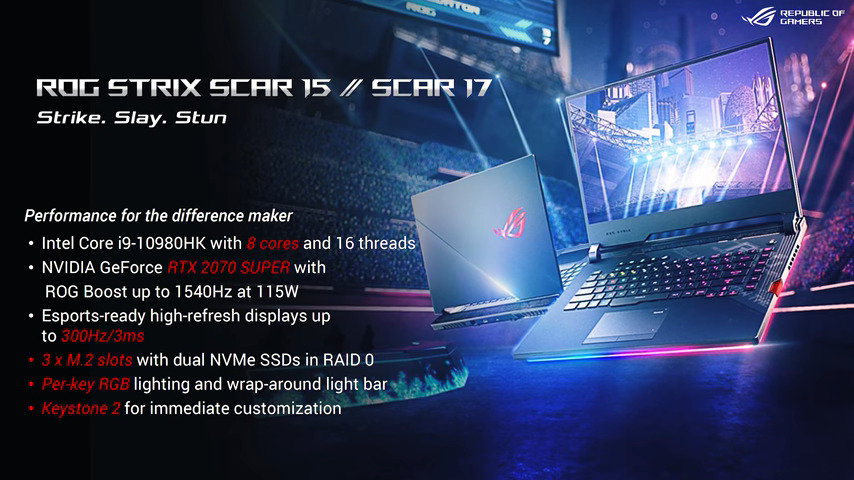 Externally the designs look very similar to the prior models, but once more both have liquid metal for cooling, and they also go right up to the 8 core i9-10980HK processor.

The Scar 15 goes up to RTX 2070 Super graphics, while the larger Scar 17 goes up to RTX 2080 Super, and these aren’t the Max-Q versions. Neither have Thunderbolt 3 or Type-C charging though, those more premium features seem to be left to the Zephyrus range. They do however offer three M.2 slots for storage, if I recall last gen there was just one and a 2.5” drive bay. 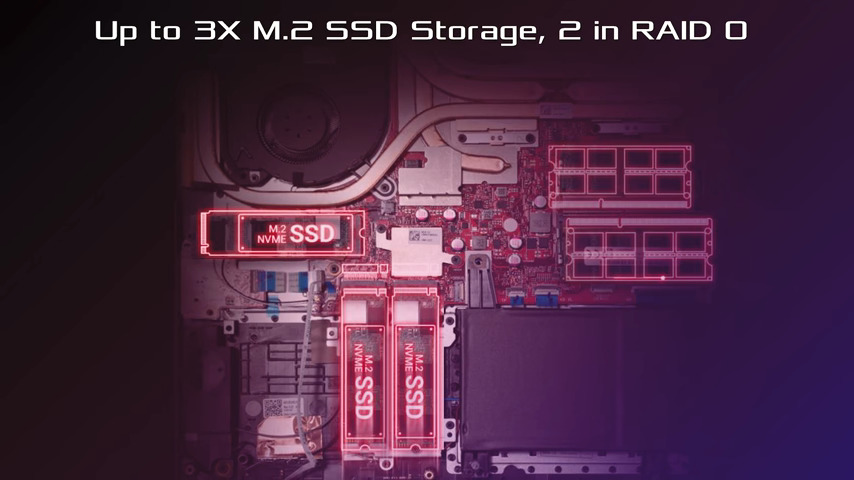 They also make use of keystone version 2, though it wasn’t too clear what benefits that provides compared to last gen. 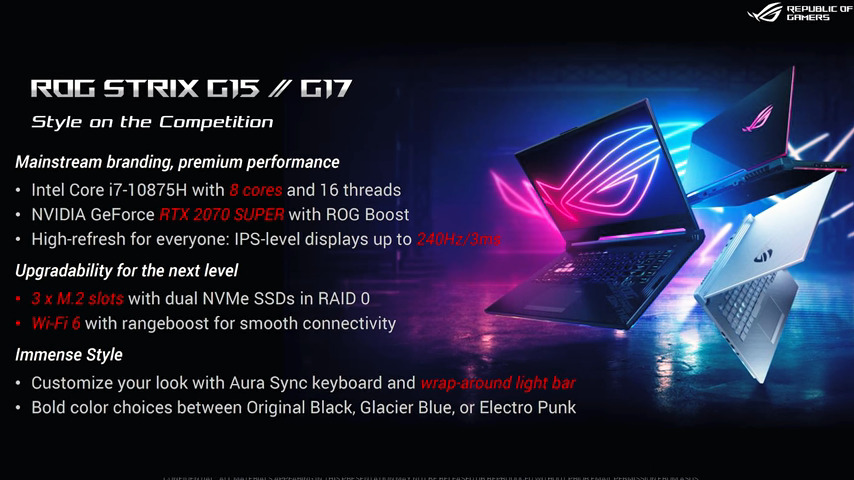 Unlike the older Strix G, these ones will also have liquid metal, and like the bigger brother Scar model also support 3 M.2 slots, with dual NVMe drives in RAID 0 with Wi-Fi 6, so some nice improvements there, ASUS seems to be getting on board with faster M.2 storage and offering plenty of slots for it.

ASUS are listing a number of their laptops with DDR4-3200 memory, however the Intel 10th gen officially supports DDR4-2933, it’s not currently clear if higher is possible with XMP profiles or if you require memory that supports 3200 with JEDEC, I’ll test that out when I have some. 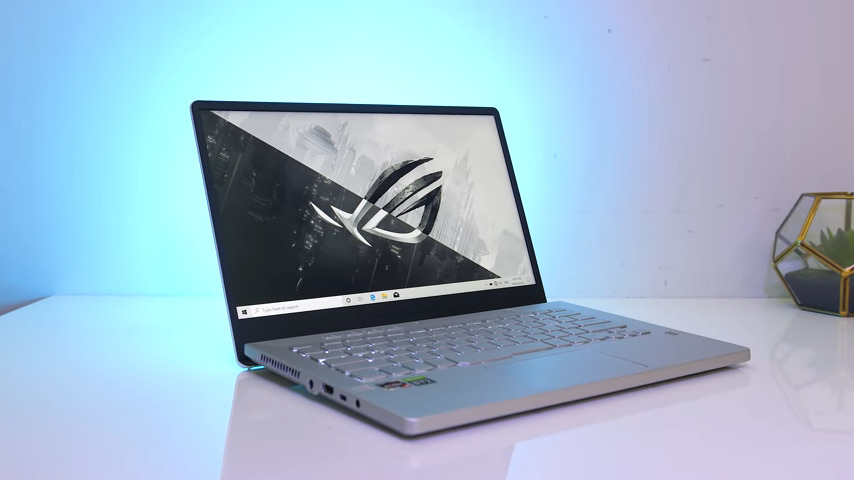 On the AMD side there’s of course the new Zephyrus G14, and the G15 which is basically a newer version of the popular GA502, and is also Ryzen based. A lot of you have asked if I’ll be testing this lately, I expect so, but don’t currently have an ETA, it depends on when ASUS have review units available in my country, so I’m waiting to hear back on that.

We saw in my CES coverage that there are the TUF A15 and A17 gaming laptops which are also Ryzen based, again still waiting to get my hands on those, however I’ve got some more information on the TUF F15 and F17, which are the Intel 10th gen versions of the A15 and A17. 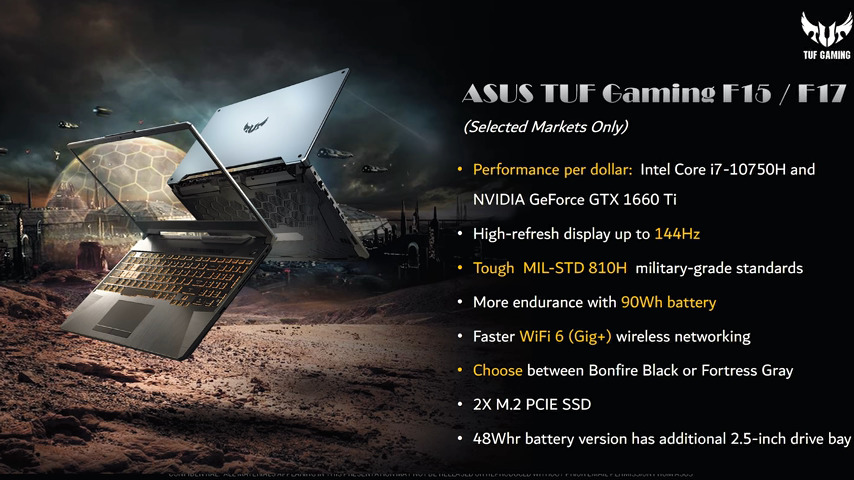 Basically they’re only going to be available in China and Taiwan, at least initially, so for most of the world we’re only getting the Ryzen versions of the TUF laptops, but honestly based on the performance I’ve seen so far that’s ok with me.

ASUS mentioned that these would be the only Ryzen based models at this time, as it requires a redesign of the motherboard and thermals, so maybe they’ll have more options in the future, but for now it looks like their higher end gaming laptops will primarily be Intel based. 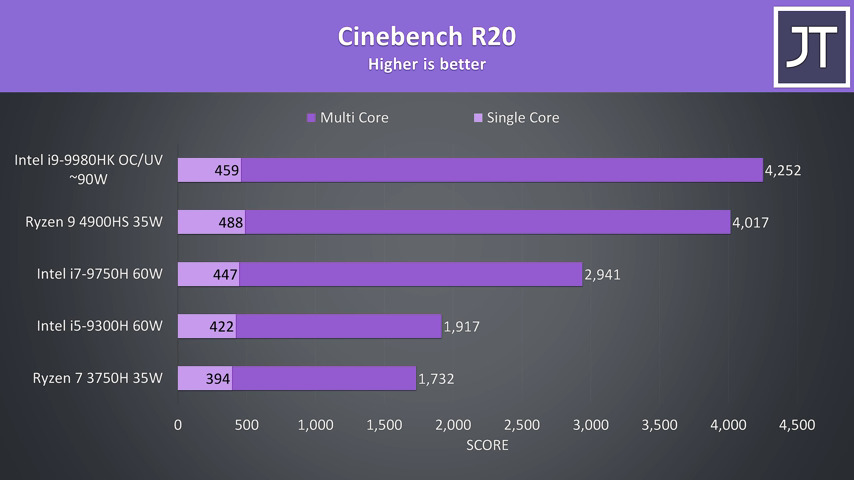 Given the outstanding processor performance from the 4900HS in the G14, I found it a little strange that they haven’t also gone for, say a Ryzen based Scar or Zephyrus model, but at the same time, I think they also currently have the most Ryzen 4000 gaming laptops available, other companies are still lacking much more in that regard.

So the key takeaways seem to be that everything has undergone a name change. Most of the lineup is being refreshed with Intel 10th gen and Nvidia Super graphics. Thunderbolt 3 has made its way into the Zephyrus models, and liquid metal is present in almost all of their 10th gen laptops.

A few of the models like the Scar and Strix have moved to three M.2 slots for expanded solid state storage, otherwise Ryzen processors will only be available in the G14, G15, TUF A15 and A17, as originally covered at CES in January.

Let me know which models you’re most interested in down in the comments.