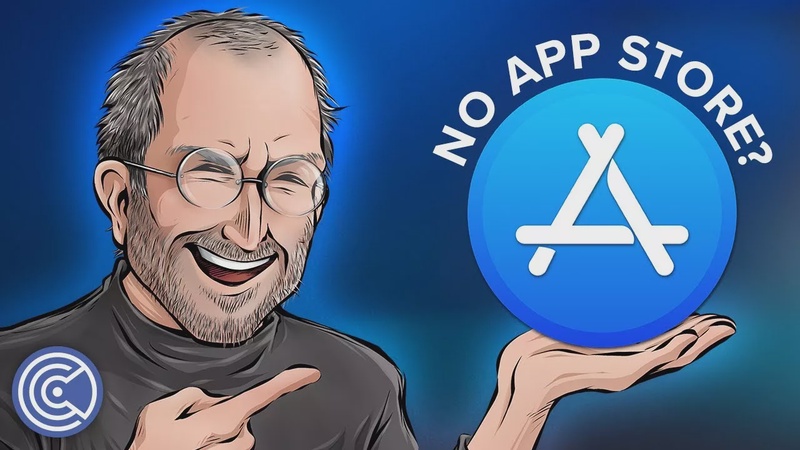 You know, the iOS App Store turned 12 years old recently, and while it's a booming platform, not everybody is happy about it. In fact, the July, 2020 Antitrust Hearings kind of inspired me to look back on the history of the App Store. And I started thinking the App Store has had such a huge impact on a culture, not just on tech, but just everyone's lives in general. So what would the world be like if the App Store never existed? Because there was a time where Steve Jobs was against the idea of users installing third-party native applications on their iPhone. So that's what we're going to talk about today.

At Macworld 2007, Steve Jobs went on stage and blew the audience's minds away with the first iPhone introduction. The software was the big game changer. At WWDC 2007, after showing off the upcoming major release of Mac OS10, Leopard, Steve Jobs and announces one last thing. And that's the development platform for the iPhone, but here's the kicker. No SDK required. How are you supposed to write software for a new platform without a software development kit? Well, Apple's vision was developers would write web applications, just using standard web technologies, and those apps would just run inside of the Safari web browser. By the way, the irony of this whole thing gets really juicy. But ultimately people were shocked by this announcement.

I actually spoke to someone who attended the keynote address. He said:

LOL. Yeah, it was shocking. The silence was palpable. My business partner at the time and I just looked at each other and were totally shell shocked as part of the reason we showed up was for the SDK info. It was almost like a member of the family died when he announced it.

So I think it was fair to say that people were disappointed by this announcement and sure you could still write those web apps using Web 2.0 technologies, AJAX, and those apps could tap into certain features on the phone, like the maps application. So that's okay I guess, but it was still kind of limiting. Here's where things get a little interesting.

In late 2011, a little while after Steve Jobs passed away, Walter Isaacson's biography of Steve Jobs was about to go on sale. It's a good read. But one of the cool stories in it is about how Steve was opposed to the idea of third party native apps on the iPhone. So why? Why did Apple want to go this route? The main reason Jobs wanted to keep native third party apps off the phone was because he wanted to keep the iPhone safe and reliable. He wanted to protect the iPhone from viruses, malware, and privacy attacks. If Apple opened the flood gates, they would need to regulate it all somehow, IE with an app store, but according to Isaacson's biography

Jobs at first quashed the discussion, partly because he felt his team did not have the bandwidth to figure out all of the complexities that would be involved in policing third party app developers.

Makes sense. The iPhone was projected to be a really big platform. There's going to be a lot of attention coming to it. And if you don't have any kind of regulation and people just throw out a bunch of apps you can install all of a sudden, well, the world is full of people that will take advantage of that. Users would just unknowingly install a bunch of crap that could invade their privacy or infect their data. It could be pretty nasty if it wasn't a regulated. In an open letter, Steve backed up this thought saying that the iPhone would be a highly visible target, so it makes sense that Apple needs to keep it secure. So everything would run in the Safari engine, which is sandboxed and nothing inside that sandbox could ever leak out and affect other parts of the iPhone software. That was it. Those were the web apps. They kind of worked, but they weren't the most convenient thing. I mean, you would still have to go to Safari every time you wanted to load something up. You would have that navigation bar up there most of the time, if not all the time, which I think kind of ruins the user experience just a little bit. It wasn't perfect by any means, but it was better than nothing.

The web app experience was improved a little bit when Jobs introduced Web Clips at Macworld 2008. This feature let users add these web apps to their home screen, and this was also the first version of iOS, not called iOS at the time, which allowed home screen customization.

So there you go. Those are web apps. That was the vision for the iPhone. At the time, this was likely a stop gap solution. Remember that open letter I was talking about earlier? It also said, let me just say it. We want native third party applications on the iPhone. And we planned to have an SDK in developers hands in February. Was Apple secretly working on one this whole time? Possibly. Isaacson's book goes on to say that Steve Jobs, even though he was initially against the idea of native third party applications, he said that Steve was more open to the idea every time the conversation came up. So it looked like third-party native apps were going to be the future of the iPhone on one big condition. The apps had to be regulated.

In March, Apple demoed the SDK and released it to developers. This meant developers didn't need to make web apps anymore. And users didn't need to run those apps in Safari. Devs could build native applications for the iPhone software, AKA iPhone OS, which was later named iOS. Some of the first demos included communication apps, medical apps, and games. Everything was looking really promising. But the big question was how do the apps get to the user? And that's what brings us to what we're talking about today. One hour, three minutes and 52 seconds into the March 6th event, Steve Jobs introduced the App Store.

The App Store was an ideal middle ground solution. It offered third party native apps to customers, but the iPhone could still stay protected and secure because the App Store helped regulate the quality control and the security of the software.  But not only that, the App Store was also the fastest way for all of those developers to reach the millions of iPhone and iPod Touch users, and you could even potentially get funding with iFund. With all of those factors combined together, there was nothing else like it. It was the quickest solution to get your apps to many users super quickly.

One other thing I want to talk about really quick, and this is the irony that I was hinting at earlier. In 2007, 2008, we were using desktop native applications on our computers, right? And we were using web apps on the iPhone, but then as time went on, it's like we shifted. We're not using web apps on the phone anymore. We're using native apps on the phone and on the computers, we're using less native apps and more web based apps and web based apps that are software as a service. And even if you do install some native applications on your computer, like Slack or Discord, those apps are really just glorified web views, which, hey, it still works. No problem with that. I just find it amusing.

And the next shift going forward is hybridization. With the Apple ecosystem, you can already use Catalyst to modify an iOS application to run it on the Mac, And with Apple Silicon Max, you can just run iOS applications natively on your Mac without any modification. Heck, even Microsoft is working with Samsung to make Android apps, play more nicely and just integrate directly into Windows 10. And Microsoft has also had the Windows subsystem for Linux for a while where he could run Linux based programs on Windows. As time goes on, these platforms are becoming less siloed, and they're turning into melting pots, really. So it's going to be interesting to see where that goes.