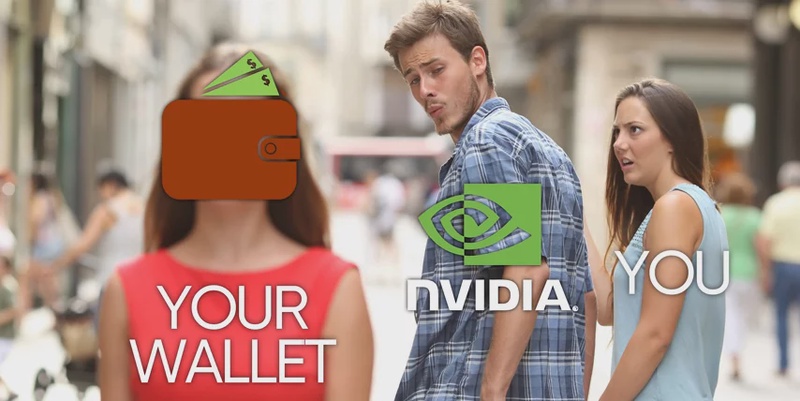 NVIDIA doesn't care about you. They don't care about gamers, and they don't care about the environment. The truth of the matter is that to basically any company that's beholden to its shareholders, you are nothing more than a living wallet on legs. If you imagine it any other way, then, congratulations, you played yourself.

While NVIDIA employs some very good people, talented engineers, passionate gamers, the top priority for NVIDIA, the company, is their stock price.

And the move they just made demonstrates this perfectly. I'm talking, of course, about the launch of their CMP, or cryptocurrency mining processor, a product NVIDIA claims was inspired by their obsession with gaming. Yeah, I don't think that's gonna be hard to debunk. So let's get started.

For the uninitiated, this isn't the first time NVIDIA has created a product specifically for cryptocurrency mining. Remember the GGeForce that we gamed on using a hacked driver back in 2019? That was basically the same idea. It was a GTX 1060, but with a cheap cooler, no display outputs, and a locked down driver that served only to ensure that once its usefulness as a mining card had run its course, no gamer could ever enjoy it. The difference is that last time the program was run quietly through board partners. And then just as quietly, faded into the shadows when crypto crashed in 2018. It was that crash, along with unexceptional performance, that meant that miners didn't care about the RTX 20 series. So we got an entire generation of relatively same pricing and availability.

We thought the worst of it was over. We were wrong. Now GPU mining gets a full-fat product page on nvidia.com and a blog post announcing new cards dedicated to it.

If you want a good laugh, you can go ahead and read the blog post. But, here's the highlights. Starting with the upcoming RTX 3060, GeForce cards will be locked to deliver only half of their true hash rate in cryptocurrency mining operations.

CMP cards, by contrast, will be fully unlocked. NVIDIA then goes on to talk about what a win this is for gamers. Because crypto miners will certainly find no way around the "unhackable driver" that limits performance on what will probably be their best selling GPU of the generation.

But we've got a problem here. That is aside from a software lock being unbeatable. NVIDIA's claim that they care who buys their GPU's. They are still GPU is by the way, they're not CMPs. Are just words. Let's look instead at NVIDIA's actions. If they really didn't want miners buying these things, like for realsies, they would've just left it at driver block and sold the chips exclusively to gamers under the GeForce banner. But no, within the perfect storm we find ourselves in, what with the global chip shortage, scalpers and bots with nothing better to do, and, a mining boom, thanks to surging cryptocurrency prices, what clearly happened is NVIDIA spotted an opportunity for profit first, and then came up with a story later to make it look like they're doing something to improve the situation for gamers.

Here's a couple of holes we can easily poke in NVIDIA's story. Number one, Silicon production is finite. So every mining GPU they make has the potential to be a gaming GPU that they didn't make. Number two, these GPU's will have practically zero value in the secondhand market, depriving future gamers, of what otherwise might be a great deal on eBay a couple of years down the road. This accelerates the rate at which these cards will turn into worthless e-waste. Let's go into these in more depth, then.

We're in the midst of a worldwide Silicon shortage that is so severe, that even car manufacturers are suffering. Let that sink in for a second. Car manufacturers are having trouble keeping up with their production, because they can't get chips. And yet NVIDIA claims to be doing gamers a solid by setting aside a stash specifically, for a task that they'll become obsolete for as soon as the next crypto slump. We reached out to NVIDIA about this and their response was that these new GPU's will in no way impact GeForce production because CMP GPU's are, optimized for mining and don't meet the GeForce specification anyway.

Well, that actually sounds okay in theory. But how can we know that? History has taught us time and time again, that even products that were specifically created to make some kind of use out of Silicon that otherwise wouldn't have made the cut, eventually, because of demand, will get filled with otherwise fully functioning Silicon.

I mean, just look at AMD's triple core CPUs from back in the Phenom days. Within a matter of months, practically all of them were unlockable with a BIOS hack to quad core. And heck, we even did a video about an NVIDIA product that could be unlocked. The MSI GeForce GTX 465 Twin Frozr II Golden Edition, that's a mouthful, could actually be turned into a GTX 470 with a simple BIOS mod. The success rate, for those wondering, I flashed over 100 of them personally, was about 75%.

Now the reason for this phenomenon is that as manufacturing matures, the number of defective samples actually drops. And eventually, in order to keep making your value products, you need to start artificially cutting down your premium ones.

So for that reason, even if we take NVIDIA's word for it, 100%, that no GeForce GPU's are going to go into CMP cards, it's a foregone conclusion that good GPU's will end up in these mining cards, eventually. And that's not even considering the fact that in simpler times these, semi defective GPU's probably would have ended up in a cheaper KO ski or something like that, that would have benefited gamers, rather than participating in environmentally devastating levels of energy consumption in the pursuit of free cash.

Bringing us to point number two. These GPUs will never make it into gamers hands, no matter what compromises gamers would have been willing to accept. I mean, it's pretty unrealistic to think that another GP106-like driver hack is going to delay their trip to the landfill. And furthermore, I think given the literal billions of dollars at play here, it's far more likely that a driver mod to bypass the hashrate restrictions on GeForce products, or some other kind of work from the crypto community to make hashing on them harder to detect, will happen, and all CMP is gonna do is guarantee GPU supply for miners.

Which, at the end of the day is just fine by NVIDIA. Because the fewer low cost alternatives exist for consumers, the more likely it is that people will go buy a shiny new GPU, rather than look to Facebook Marketplace or to Craigslist. 'Cause don't kid yourself. NVIDIA remembers what happened with the RTX 20 series launch. The recommendation from most reviewers, including us, by the way, was to ignore RTX 20 series, and just go buy a used GTX 1080 or 1080Ti instead. And there were plenty of used 10 series GPUs to be found because of, that's right, the crypto boom and bust that had just occurred.

"No gamer wants a Crypto card anyway. It's all worn out." you might say, Well, that's where you're only sort of right. I mean, yeah, some of them died of course. But, many of the cards that were mined on for years, still had plenty of life left in them because most knowledgeable mining operators, actually under volt the cards, both to reduce their heat output, and to reduce their power consumption.

So, NVIDIA is actually playing a pretty clever game here covering their bottom line both today and tomorrow by ensuring that when this mining boom ends, which it inevitably will, these cards don't end up flooding the secondhand market and incentivizing people to buy used. Which leads us to the subject of the predictable final resting place for these cards. The landfill.

With no way to recoup some of their costs by selling their used cards, the best possible outcome is that crypto miners will send them to an electronics recycler. But here's a dirty little secret. Very little actually gets recycled from a product like this. I mean, even if you could economically pull all the gold and other precious metals from a fully manufactured product like this, and by all accounts, you realistically can't, you're still left with a pile of ceramics, PCBs, and plastics, that aren't going anywhere anytime soon.

The problem of e-waste and the wider environmental impact of the tech industry has been growing for long enough that we are now rightly scrutinizing companies for things as small as single use plastics packaging. But, before you get upset. We're not saying that you need to feel bad for enjoying your life and stop buying video cards altogether. We're just saying that of the three Rs, reduce and reuse come before recycle for a good reason. And NVIDIA, is intentionally ignoring both of them. These are single use GPUs, designed to be discarded. This is 100% a move by NVIDIA to cover their own asses. And there are zero fuck given about gamers. No matter how hard they scream that their focus is GeForce.

The GeForce-100 changed absolutely nothing about the short supply last time. And it won't change anything today. NVIDIA is not your friend, and you shouldn't defend this bullshit. The good news though, is that I'm gonna tell NVIDIA right here and now how to fix this for gamers. Let's see if they do it.

NVIDIA, you need to unlock the 3060 driver. And, hold on. I'm sure someone is gonna throw this up on r/unpopularhottakes or whatever, but gamers, think about the bigger picture here for a second. We just explained to you how realistically, crypto miners gonna crypto mine. It's not gonna have any impact on pricing or availability today. And at least it ensures that as crypto falls and miners start losing money, and liquidating their assets, patient gamers will repay veritable bounty of cheap GPU Tendies. So diamond hands, gamers. Diamond hands.

Not that it matters anyway, because the truth is NVIDIA is too greedy, arrogant, or both, to actually do it.