Let’s start with what Nvidia’s got coming down the pipeline, as honestly it’s more interesting compared to 14nm plus plus plus.

So we’ve got some new laptop GPUs, well more like refreshed I suppose. 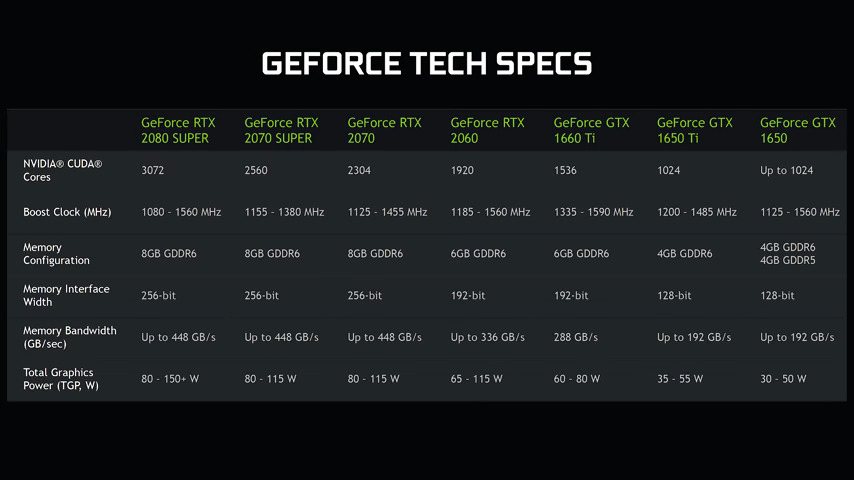 There are going to be Super versions of the 2070 and 2080, which have higher CUDA core counts. The clock speeds with the Super versions are actually down slightly. There’s more to it than that though.

Interestingly, the boost clock of the 2070 is a little different compared to what Nvidia had previously on their website. Same with the 2060, previously the maximum power was 90 watts, now it’s up to 115 watts with a higher boost.

That said, based on these specs, it looks like a 1650 with GDDR6 memory and possibly a slightly higher power limit of up to 55 watts, but at the same time they also have the 1650 listed with GDDR6 now, so there might be a newer version of that with faster memory to keep things confusing. It doesn’t seem that the 1650 Ti will offer that much more over the refreshed 1650, it’s got the same CUDA core count, memory option, lower boost speed, but higher power limit by just 5 watts.

It sounds like there have been quite a few improvements with regards to Max-Q graphics. 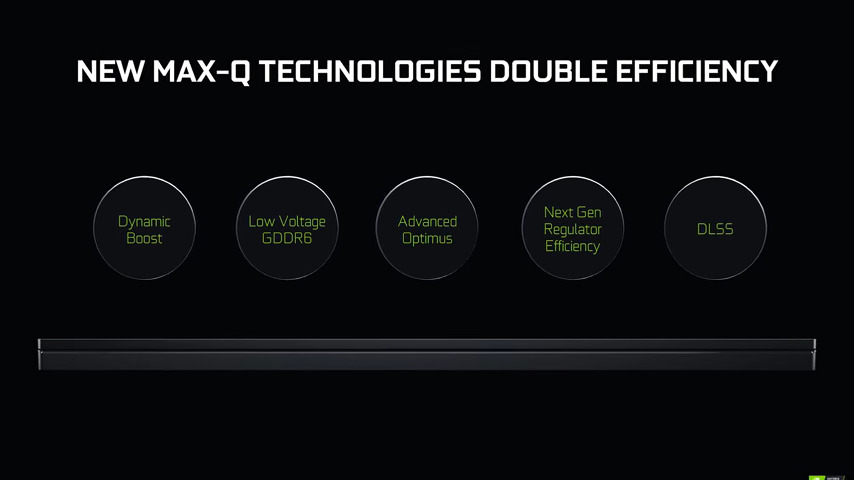 First off, there’s dynamic boost, which shifts power between the CPU and GPU for best performance. 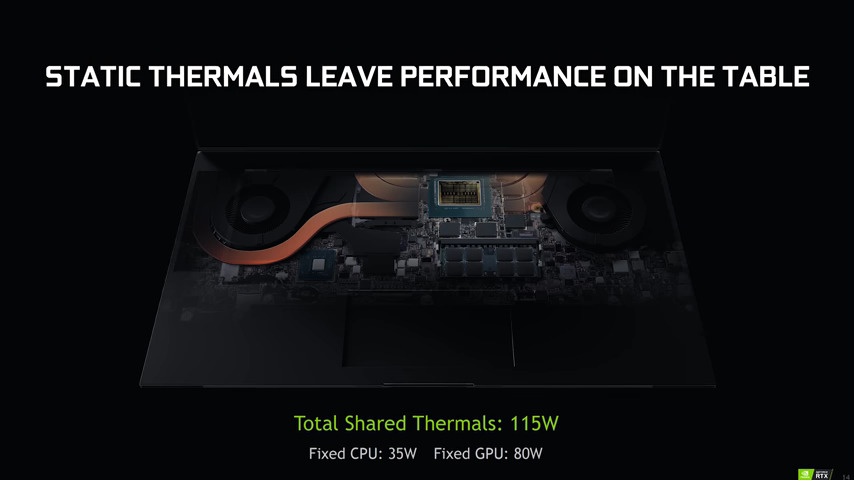 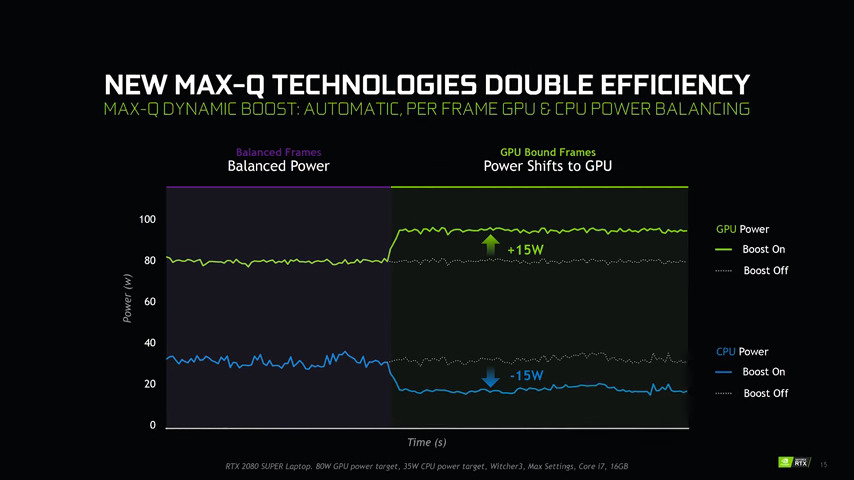 Laptops also need to have shared heatpipes for dynamic boosting to work, as thermal performance will shift as a result of this, but considering almost all laptops I’ve tested over the last few years have this, I doubt it will be a real limitation.

The electrical system of the laptop also needs to be built to support those higher power draws that the GPU will be able to sustain when boosting. 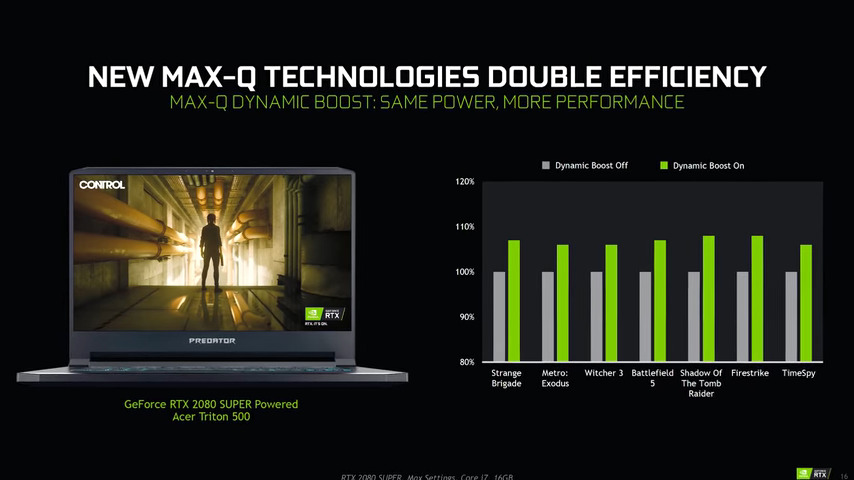 Nvidia says dynamic boost can offer an up to 10% performance improvement, however as additional hardware is required for this feature it needs to be factored into the design, so dynamic boost will not be present in any older models with a software update, we’ll only see it in these new 2020 laptops.

Initially dynamic boost will only work in Direct X API workloads. Over time they will expand into Vulkan and so on, but for now it works with frame rate based workloads such as gaming, which means if you’re exporting a video in Adobe Premiere or rendering, then don’t expect to see dynamic boost being used.

I asked if dynamic boost would only be available for Max-Q graphics and was told yes, which makes sense, as Max-Q are basically just power limited variants of the full powered chips, and full power Max-P parts don’t need to boost up, they run at max power already.

I also asked if dynamic boost would work with both AMD and Intel based laptops and was told yes, as long as it uses Nvidia graphics it should be fine, so no other platform or processor limitations, however it sounded like Intel based configurations would be first to market.

Dynamic boost is not a requirement and is up to the vendor to implement, so we could see some machines that don’t use it, but Nvidia seemed to think that would be unlikely as it’s a good performance boost. Apparently the user will have the option of disabling dynamic boost, should they want to for some reason, so I guess that at least means I can benchmark with and without it to see the performance difference.

The next interesting thing coming is advanced optimus. 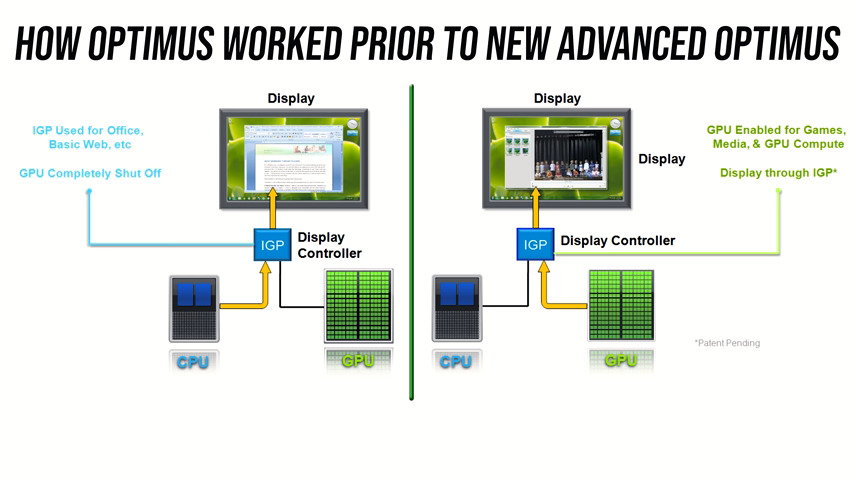 The way optimus worked previously is that the lower powered integrated graphics in the processor, whether that be Intel or Vega based, connects to the laptops screen. When a graphically intensive task is run, the discrete Nvidia graphics takes over, however the signal goes via the iGPU which can potentially act as a bottleneck.

Some laptops today offer the MUX switch, which lets the user swap between optimus enabled for better battery life, or optimus disabled for optimum performance, however this requires a reboot to complete. With advanced optimus this will be a thing of the past. 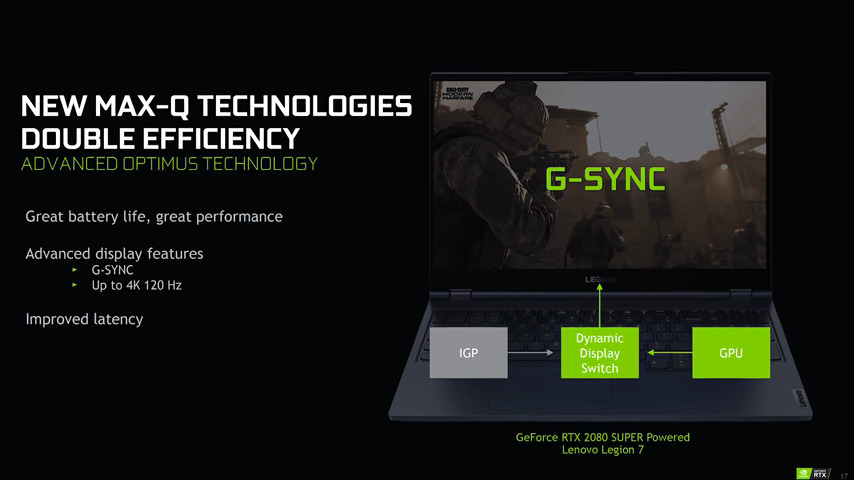 In order to use G-Sync or drive high resolutions at high refresh rates, the Nvidia graphics needs a direct connection to the display, and this is one of the reasons why laptops with G-Sync are less common. The new advanced optimus takes a new approach and uses a dynamic display hardware switch. There’s still both the integrated and discrete nvidia graphics, but both of these go via the new dynamic switch, which chooses which GPU is needed and switches as required. This is an automatic process and does not require a reboot, as was the case in the past. This means Nvidia based laptops will be able to offer good performance without being restricted by previous Optimus constraints, and that G-Sync could be more commonplace.

We were told that the first gaming laptop featuring advanced optimus will be the Lenovo Legion 7, but there will be more on the way. The way the laptop automatically swaps between the iGPU and dGPU is based on the same whitelist Nvidia already uses to determine when to make the Nvidia graphics take over a workload, which from my experience is quite good, the only thing that’s changing is the underlying hardware and software implementation. The user is also given the option to only run in discrete graphics mode, so you should be able to easily disable the iGPU without a reboot any time, it’s great they’re giving us that choice.

Out of the power budget, Nvidia also said about 15% or 12 watts is just turned into heat and dissipated. There have been improvements here with newer next generation regulators. The end result is similar, less power wasted that can instead be fed to the GPU core to increase frequency and performance.

The interesting thing is, many of these improvements like lower voltage GDDR6 and regulator efficiency will not only be applied to the new Super versions, but also the existing lineup, so the 1660 Ti or 2060 that we previously had. This means that a 1660 Ti laptop from 2020 should outperform a 1660 Ti laptop from 2019 as it’s got these improvements. It sounds like the GPU core is otherwise the same, but these other improvements will result in a performance change. This may be challenging from a benchmarking perspective, because all of these new graphics will exist with either AMD Ryzen 4000 series CPUs which just launched, or Intel 10th gen CPUs which are launching now, so there will be CPU differences at play there too.

I don’t think it’s ideal for the existing graphics options to change in performance while keeping the same name, but it seems that’s what’s happening here.

So to summarise, along with the new Super graphics options available, the existing lineup will also perform better. 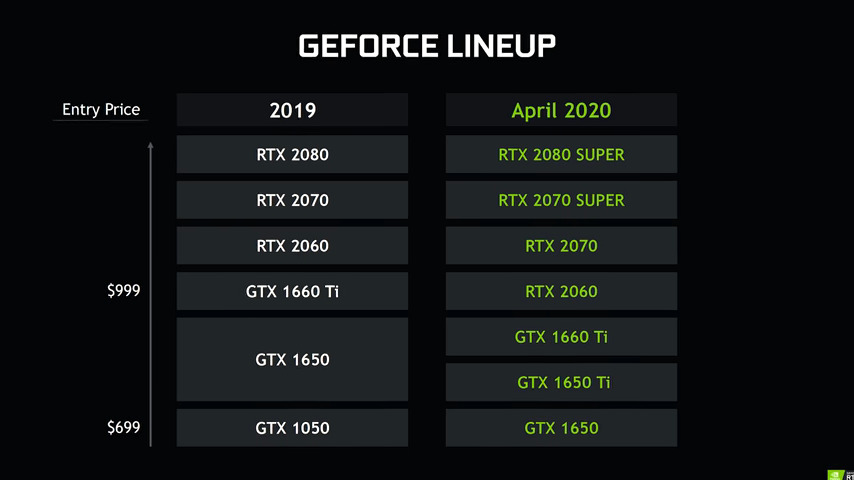 Anyway, that’s a good segway into the rest of the news I can share with you today, Intel’s 10th gen H series processors are on the way. 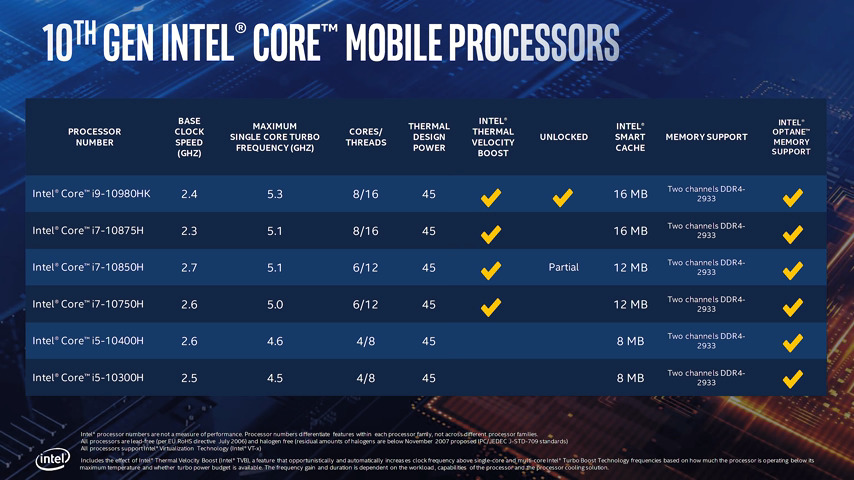 These are still based on their 14nm architecture, so we’re basically looking at a refresh of 9th gen, which was a refresh of 8th gen. The memory speed has been boosted from DDR4-2666 to DDR4-2933, so that’s a welcome change, granted still not quite the DDR4-3200 we’re getting with Ryzen 4000.

It’s worth noting the maximum turbo boost is single core, and these are thermal velocity boost numbers, so you’ll only hit these briefly most likely while temperatures are under control.

Personally I think it’s a little confusing that there are both 6 and 8 core i7 processors, but it is what it is.

It looks like the 10750H essentially replaces the 9750H, so that may be a popular model in upcoming laptops, we’ll have to wait and see, maybe the 10875H could also be common if vendors decide to give us 8 cores, I’m really interested to compare this against the new Ryzen chips.

I found it a little odd that Intel were only comparing gaming performance against 7th gen, I guess there is an argument that people aren’t upgrading their machine every year, but to me this is kind of telling, there’s likely no decent performance improvements compared to 8th and 9th gen, which 10th gen is essentially a refresh of. 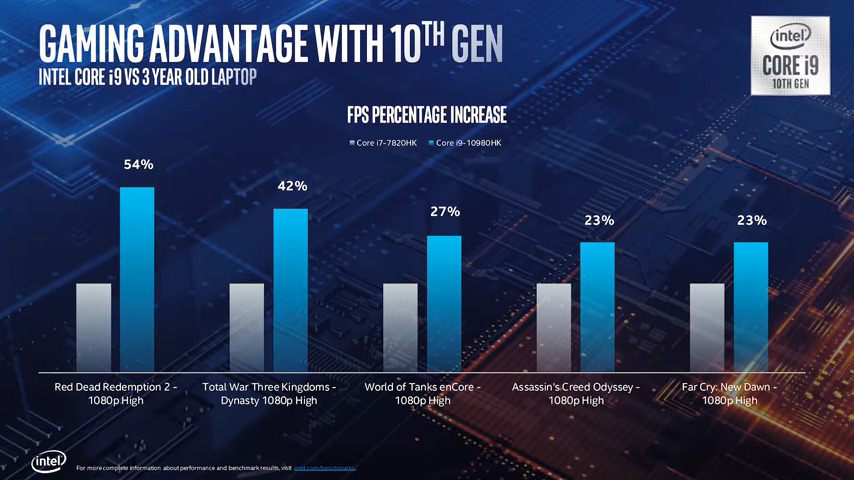 There are some other improvements in terms of WiFi 6 and Thunderbolt support built in, but no comparisons were provided showing us why this matters.

Nvidia was saying that RTX 2060 laptops will start at $999 USD, and will include models such as the Acer Nitro 5, HP Omen 15 and Lenovo Y540, so if those are actually available at that price point it should be better than what was previously available.

Nvidia acknowledged that similar specced laptops have gone on sale around this price point in the past, but now this should be the entry level price point.

ASUS are refreshing their lineup in the most interesting way I’ve seen so far compared to the others.