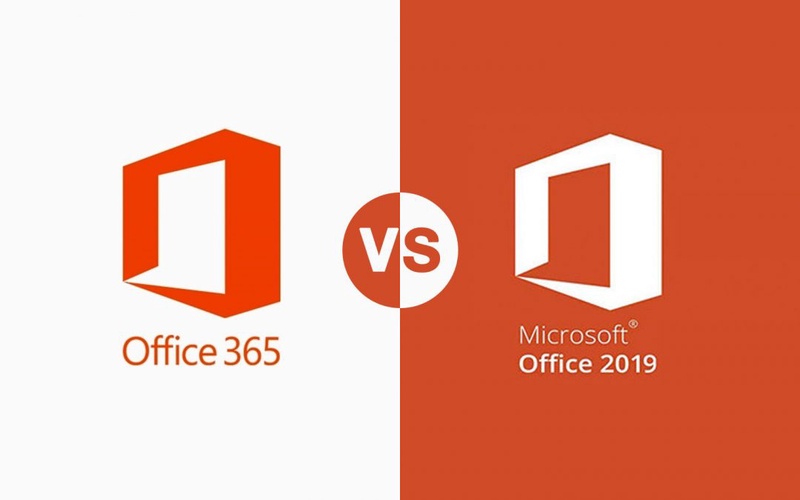 The name Office 365 itself can be ambiguous, so just to be clear, I'm talking about the client applications. You know, Office 365 Home and Business or Office 365 ProPlus. Not the cloud services, so not Office 365 Business Essentials or E1, for example.

On paper, Office 365 and Office 2019 both look very similar; and that's because they are. In fact, for most of you the choice of which one to buy is probably going to come down to which pricing model you prefer.

That brings us to the first, and for most people the most significant difference between the two. Office 2019 is a one-time purchase. You buy it, you own it, and you can use it forever. Now, that doesn't mean you can upgrade to the next version, of course. When Office 2022 or Office 2025 comes out, if you want that you'll have to pay again. Assuming you don't have Software Assurance.

Office 365 on the other hand is more like a rental agreement. You pay a monthly or yearly fee, and you're always licensed for the very latest version; but if any point you stop paying then you lose access to the software. You can think of it like Office 2019 is like buying a car outright, and Office 365 is like leasing a very similar car.

The next significant difference is the updates. Office 365 is continually being developed, and it receives new features as they're completed. Office 2019 on the other hand had its feature set fixed when it was released.

So it does what it does, but you shouldn't expect to see any new features until Office 2022 comes along. Office 365 is very much Microsoft's flagship version, and it's always going to be more feature-rich than Office 2019. In fact by the time 2019 was available to buy, Office 365 already had extra features.

They both do get updates, but Office 2019's updates focus more on stability and security.

That being said; it's Microsoft Office. It's not like it's fundamentally changed in some kind of meaningful way in a very long time. So don't expect Office 365's additional features to be earth-shattering. In fact if you put Office 2013, 2016, 2019, and 365 in front of your average user, most of them probably couldn't tell the difference. The new features in the Office 365 client applications are primarily going to be client-side integrations for new features in the Office 365 cloud services. It's not going to be some kind of reimagining of word processing. If you're the sort of early adopter that likes to get access to those new cloud features as soon as you can, you're probably going to prefer Office 365 as opposed to Office 2019. For most people though, Office is Office.

If you've used both, and find a particular Office 365 only feature to be useful, then why don't you drop a message in the  comments.

Pushing lots of updates has a negative impact on reliability. Now, in this case the same principle does apply, but fortunately it's a lot less extreme than with the cloud services.

Microsoft seems to take something of a Gung-ho approached to updates in their cloud services. The attitude appears to be that if they break it, who cares? It's their service. As soon as they figure out what update broke it, they can just roll it back. That same approach doesn't really translate to the Office 365 client apps. Yes, Microsoft can fix the code; but it's installed on your computer. So they still have to get that fix out to you and that's a lot more difficult. Most likely because of this lack of control, Microsoft are a lot more restrained with updates to the Office 365 client applications. If you take Exchange Online for example, it gets a new build released every single week. The Office 365 client applications on the other hand get at most a feature update once a month. For most people it's once every six months.

I use both Office 2019 and Office 365 on a daily basis and on the whole I'd say I've noticed slightly fewer problems with Office 2019, so maybe it's a little bit more stable; but I could count those issues in one hand. I am nitpicking here. On the whole I'd say Microsoft have done a good job striking a balance between features and reliability for Office 365. That's not something I'd feel comfortable saying about the cloud applications, but the client applications... yeah, I think it's deserved.

So... which one should you buy? Well, there's no one-size-fits-all answer. Otherwise, there'd just be one option. Let me help you with a few scenarios. As a general rule, though; outside of a few specific circumstances, you can't go far wrong with either.

Home user and a lot of businesses

If you're looking at this for personal use rather than rolling it out across a business, then it probably doesn't matter all too much. Just pick whichever version has the least painful pricing option for you.

Do you want to pay everything upfront and own it forever? Office 2019.

Do you prefer to pay monthly, every single month, but always have access to latest version? Office 365.

To be honest, that same advice will apply to a lot of businesses, too.

If you use the Office 365 cloud services, then again either option is fine; but in this case I'd recommend Office 365 over Office 2019. There is a natural pairing there, and quite often you buy them together in the same subscription anyway.

If you've chosen the Office 365 cloud services then you've already chosen the path of frequent updates, and you're okay with the pros and cons that come along with that. In that case I suggest doubling down on the updates. Use the Office 365 client, get access to new features more quickly, and start taking advantage of them.

If you're responsible for a heavily controlled environment - the type that tends to move slowly and tests every single change in minute detail; then Office 2019 that might be a better choice for you. That way you get to fully test every single change before anyone gets it.

That's not to say you don't get the opportunity to test with Office 365. There are different update channels so you can choose some people to get the updates ahead of everyone else, but the updates are still coming whether you want them to or not.

A scenario where you would probably have to choose Office 2019 over Office 365 is if you didn't have access to the Internet. I'm sure that doesn't apply to most of us. But there are going to be niche cases, like maybe you work on a submarine. In this case 2019 is a better choice. Office 365 is subscription-based, and because of that it needs to check in every 30 days to make sure you've been paying your bills. If it doesn't find a license or it can't check online then it will deactivate itself. Office 2019 on the other hand, is a more traditional one-time activation process. So if you're in a position where you can't check online, that's going to be the better choice.

Other than that, assuming Internet connectivity isn't a problem and you're not overly averse to updates coming down the pipe, pick based on price. Whether you prefer features or reliability is a consideration, but there's not a huge amount of difference either way. Overall, don't stress about it.