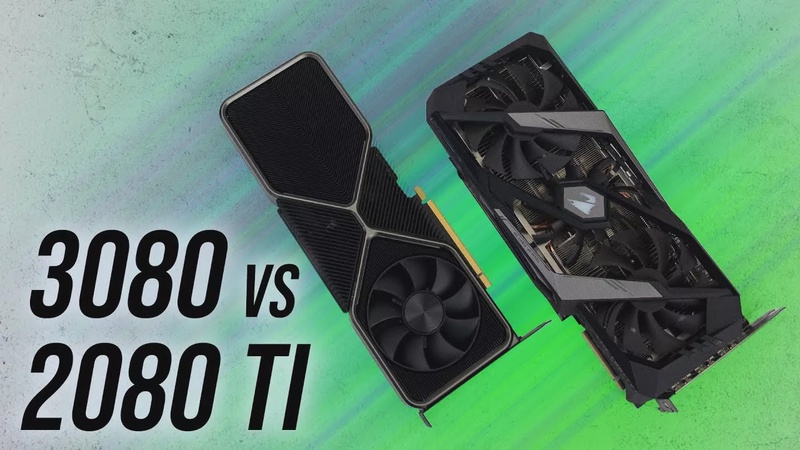 Let’s start with the spec differences.

The 3080 has double the CUDA core count, kind of but not really, it’s an architecture change which won’t offer big gains for gaming. The 2080 Ti has an extra gig of VRAM, but the 3080’s newer GDDR6X memory is faster, and its base and boost clock speeds are faster too, though it does also use more power.

Both were tested with the same Windows and Nvidia updates, so let’s get into the results.

Starting out with Microsoft Flight Simulator, I’ve got the newer 3080 shown by the purple bars, and the older 2080 Ti below shown by the red bars.

The three resolutions tested are on the left, starting from 1080p down the bottom, 1440p in the middle, and 4K towards the top. In this test there was only a minor difference at 1080p, then the margin grows as we step up to higher resolutions. At 1440p the 3080 was 16% faster than the 2080 Ti, though this was a below average result out of all 11 games tested at this resolution, then at 4K the 3080 was reaching 21% higher average frame rates.

Again there’s less of a difference at 1080p, as these higher end GPUs are better utilized at higher resolutions. At 1080p the 3080 was 14% faster, but then at 4K the 3080 had a bigger 31% lead - the second biggest improvement seen out of all games tested.

Battlefield 5 was tested in campaign mode by running through the same mission on both graphics cards.

I’ve tested Metro Exodus with the game's benchmark tool, and this test saw some of the smallest differences out of the 11 titles tested.

The Witcher 3 saw above average improvements with the 3080 at 1080p, but then below average at the higher resolutions.

Realistically the 2080 Ti at 4K ultra settings is still above 100 FPS and running it without any problems, I can’t really say I noticed the difference anyway, but hey I don’t have a 4K high refresh rate monitor.

Assassin’s Creed Odyssey was tested with the built in benchmark.

The 3080 was above 60 FPS even at 4K with the highest setting preset in use, and this was despite a below average 22% higher average frame rate, though its 1% low was still above the average from the 2080 Ti.

Call of Duty Modern Warfare was tested in campaign mode.

The 2080 Ti was right on 144 FPS at 4K, so it’s probably still going to be pretty decent even if you actually have a high refresh 4K monitor, but the 3080 was reaching a 26% higher average frame rate.

In some titles like flight simulator, down the bottom, we’re seeing a negligible difference, while others such as Control at the top still had nice gains.

As higher resolutions can typically make better use of the GPU we’re starting to see what the 3080 can do. Control with RTX enabled was again the biggest difference out of the titles tested.

Again the Control result with RTX and DLSS enabled was the largest difference with almost a 35% higher average frame rate on the newer 3080, while the worst result, Metro Exodus, had a 15% boost, so if you’re targeting 4K the 3080 certainly offers a fair improvement.

When we look at total system power draw from the wall, the PC with the 3080 installed was using around 9% more power, and this was while offering a 30% higher average frame rate in Control at 4K with RTX disabled, which sounds pretty reasonable to me, but keep in mind at 1080p Control was only 6% faster on the 3080.

Let’s check out value in gaming in terms of dollar per frame.

Regardless of what dollar amount we set for the 2080 Ti, the 3080 is winning from a cost per frame perspective, the MSRP is just below the 2080 Ti and as we’ve seen at higher resolutions it can perform a fair amount better - though this of course assumes you can find a 3080 to purchase at $700, it could be a while for stock to replenish.

If you’re buying today, then the 3080 is the clear choice unless you really want that extra 1 gig of VRAM or something, and if you already have a 2080 Ti, well it still should be doing just fine today and it should hold up for a while, but at the same time if you can sell it for $700 and pick up the 3080 instead, as we’ve seen it will do much better in games.

I’ve also tested both in content creator workloads, it’s not just all about gaming!

I’ve tested DaVinci Resolve with the Puget Systems benchmark, and the 3080 was scoring 20% higher than the 2080 Ti, so similar to many of the games. Resolve is able to better utilize the GPU when compared to alternatives like Adobe Premiere, and this is a decent increase.

I’ve tested the V-Ray benchmark and saw big gains from the 3080, which was scoring 79% higher than the 2080 Ti. This is testing compute power, and if you recall the 3080 has double the CUDA core count, kind of, so bigger gains in a test like this are expected.

Blender was tested with the Open Data Benchmark with the BMW and Classroom tests.

This is also relying more on compute power, I selected the CUDA option when running the test, and the 3080 was completing these tasks 89% faster than the 2080 Ti, another big win.

In Compute heavy workloads the 3080 is able to offer significant gains, so it really depends on what you plan on using these for as well as your budget. As we saw, the differences don’t fully translate into gaming performance, though the 3080 was still a nice step up over the 2080 Ti there, mainly at higher resolutions. The 3080 is a nice option for the money compared to what was available last generation, assuming you can actually get your hands on one, as stock is still limited.

Let me know in the comments if you plan on getting a 3080 and what you plan on using it for.