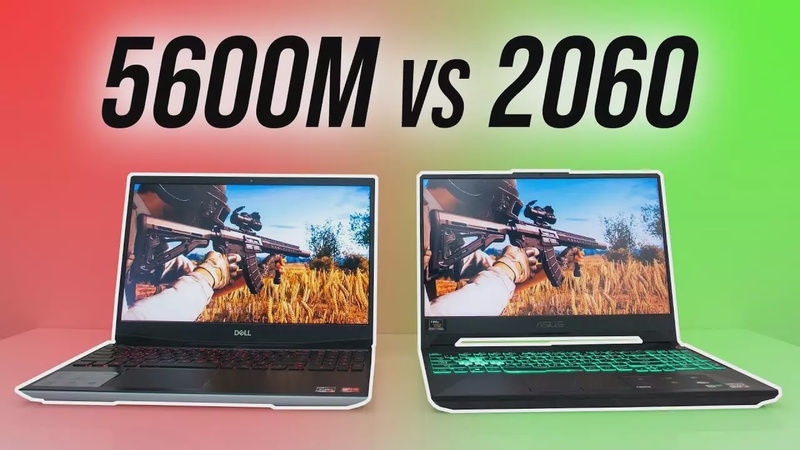 Which graphics should you pick in your next laptop? The Nvidia GeForce RTX 2060, or the new Radeon RX 5600M from AMD?

Both have 6GB of GDDR6 memory, however it’s important to note that the RTX 2060 I’m testing with here runs with a 90 watt power limit, so performance will be lower with an 80 watt 2060 or better with the new 115 watt configuration, however in my experience 90 watt is the most common variant of 2060.

I’ve chosen these two laptops because they both otherwise have the same Ryzen 7 4800H processor and 16gb of memory in dual channel at the same speed.

The G5 is the first laptop to offer smartshift, and basically this allows it to dynamically adjust power between the processor and graphics depending on the workload, so we’ll see if this helps it out. It’s not possible to disable this, and given the 5600M only exists in the G5 right now, I can only test with it enabled. The reason I’m comparing these two is because AMD has shown the 5600M beating the 2060 in the reviewers guide, so I’m putting this to the test.

Both laptops were tested with the latest Windows updates and drivers from both Nvidia and AMD at the time of testing, with that in mind let’s start with the gaming results.

Battlefield 5 was tested running through the same section of the game in campaign mode on both machines. This time the 2060 was ahead at all setting levels, with a little more difference seen in the 1% low results compared to the average frame rates.

Shadow of the Tomb Raider was tested using the games benchmark. The 5600M was coming out ahead between lowest and medium settings, however the 2060 took the lead at the high and highest setting presets, where it was 12% faster maxed out.

Control was tested running through the same section of the game on both laptops. Once more the 5600M was ahead at low to medium settings, at least in terms of average FPS, the 2060 was seeing larger gains to the 1% low performance. At high settings the 2060 is in front in all regards and now has a 9% higher average FPS, but a larger 19% boost to 1% low.

Ghost Recon Breakpoint was tested using the built in benchmark, and this test really seemed to favour the Nvidia based laptop, which was ahead by fairly large amounts regardless of setting level. At ultra the 2060 was 18.5% ahead in average FPS.

Borderlands 3 was also tested using the games benchmark. The average FPS difference isn’t all that large, and although the difference to 1% low is on the smaller side at lower setting levels, it ends up being quite big. By the time we get to max settings, the 1% low from the 2060 was 50% higher than the 5600M machine.

Apex legends was tested in Season 5 with the world’s edge map by running through the drill site. Once more the RTX 2060 was ahead in this title, both at maximum or minimum setting levels.

The Division 2 was tested with the built in benchmark. This was another game where the 5600M was ahead at lower settings, in this case all but ultra where it couldn’t quite manage to come out in front.

Fortnite was tested using the replay feature with the exact same replay on both laptops. The 2060 was in front in all instances here, however by the time we get up to the highest epic setting preset it’s less than a 5% higher average frame rate. The 2060 has a higher 11% lead at low settings.

PUBG was also tested with the same replay on each machine. This has been a title that I’ve found to favour Nvidia graphics in the past, and that seems to also be the case here too. At ultra settings the 2060 had a 27% higher average frame rate when compared to the 5600M, the second highest out of all 20 games tested.

Far Cry New Dawn was tested using the games benchmark tool. This was another test where the RTX 2060 laptop was ahead regardless of setting level, both for average frame rate and 1% low.

Monster Hunter World was tested running through the main town on both laptops. The 5600M had a higher average frame rate at low settings, but otherwise in all other regards the 2060 was in front, granted it wasn’t by that much, with just a 4% higher average FPS with highest settings.

Metro Exodus was also tested with the built in benchmark, and the results were extremely close together here, though the 5600M had a clearer lead with low settings.

CS:GO was tested with the Ulletical FPS benchmark. There wasn’t really much difference on the 5600M regardless of the setting levels in use, and by the time we get to max settings the 2060 is only 3% faster in average FPS, which I’d argue you’re probably not going to notice at 200 FPS.

I’ve also tested everyone’s favourite Dota 2, and again the 2060 was in front, but it was once more a slim margin. At ultra settings the 2060 was just 4% faster, and again with such high frame rates I think you’d be hard pressed to see a difference.

Assassin’s Creed Odyssey was tested with the built in benchmark. This was another title where the 2060 was in front regardless of setting level, though at max settings this was just a 6% higher average frame rate.

Rainbow Six Siege was also tested with the built in benchmark. The 5600M had leads at low and medium settings, but then at higher setting levels which are presumably more GPU bound the 2060 takes the lead with a decent 17% higher average frame rate at ultra.

Overwatch was tested in the practice range as it allows me to perform the exact same test run, perfect for a comparison like this. I thought the results were interesting, at epic the 2060 had a clear 13% higher average FPS, but then at high settings both were extremely close together.

The Witcher 3 tends to be more GPU bound in my experience and offered some interesting results. At max settings the 2060 had a 14% higher average frame rate, however the 5600M was able to produce a higher 1% low result, and similar was noted at high settings too.

On average out of the 20 games tested at the highest setting level, which is typically most GPU heavy, the Nvidia RTX 2060 was almost 10% faster than the Radeon RX 5600M, though the amount could vary significantly depending on the specific title. It doesn’t seem like AMD’s claim of the 5600M beating the 2060 holds true, at least in these games.

As mentioned I’m using a laptop with a 90 watt 2060, the gap may be less with an 80 watt 2060, though when I recently compared 80 watt and 90 watt graphics models together I only saw a 3% performance difference, so I doubt it would change that much.

Things get a little more interesting when we instead look at the lowest setting levels, typically where the processor matters more.

This time the 2060 was only 3% faster than the 5600M, so with an 80 watt 2060 I could see the 5600M possibly winning here. I think this is a result of smartshift, at these lower setting levels the processor should be able to get more power as the GPU doesn’t need it. The A15 on the other hand just has more static power limits regardless of the workload.

I’ve also tested FireStrike and TimeSpy from 3DMark, and in these tests the 5600M was beating the RTX 2060, some interesting results given what we saw in the games.

I’ve also tested SPECviewperf which tests various professional 3D workloads. The results could vary significantly based on the specific test, in some the 5600M had nice leads, while with others the 2060 was further ahead.

I’ve used the Puget systems benchmark for Davinci Resolve, and the RTX 2060 was scoring a fair amount ahead of the 5600M.

In the Photoshop test however the scores were extremely close together and about the same.

In Adobe Premiere though the 2060 system was performing a fair bit better, hopefully the 5600M improves over time, it is still new so perhaps software needs to adapt.

As both machines have different cooling solutions we can’t really compare apples to apples, but given the 5600M only currently exists in the G5 I’ve gone ahead anyway.

The 2060 was running 11 degrees cooler in this workload, but what I found most interesting was that this was despite the 2060 system drawing more power from the wall.

To be fair, the 5600M system was using more than the 2060 initially, but I took these numbers after sitting in the game for 30 minutes once things like boosting should have settled down.

The RTX 2060 also of course has the advantage of ray tracing. Personally I wouldn’t buy today with that in mind as there are so few games that use it even after all this time, but some do implement it well like Control, so it depends how important that is to you.

For the final difference, the price. This will depend on where you live, but in general expect the RTX 2060 to cost more money. This isn’t always the case though. The Dell G5 with these specs that I’ve tested here is $1200 USD at Newegg, however the ASUS TUF A15 appears to go for the same price but with a larger SSD and bigger battery, though it is currently out of stock here so expect this to change. On Amazon it’s $100 extra, but again refer to the updated links in the description. Even if we assume the $100 extra money, that’s 8% more cash for an average 10% higher performance at max settings, sounds pretty reasonable to me.

At the same time, the A15 has other issues that make it difficult to recommend like the 20ms response time screen, so it will depend on what your preferences are. Let me know if you want to see a full comparison between the G5 and A15 in a future. In terms of driver issues, I didn’t have any crashes with either, but with the 5600M I will note that by default Vulkan games would try to run on the Vega iGPU. This was an easy fix though, you just need to set them to high performance mode in the Windows graphics settings, however this wasn’t an issue with the 2060 machine, so that felt like a more polished experience.

Where I think the G5 and 5600M will really shine is at the entry level $880 price point, as it will be up against the GTX 1660 Ti there. I’ve already tested that for an upcoming comparison, and I can tell you the difference is much more interesting compared to what we saw here,  let me know which of these two graphics you’d pick in your next laptop and why down in the comments.