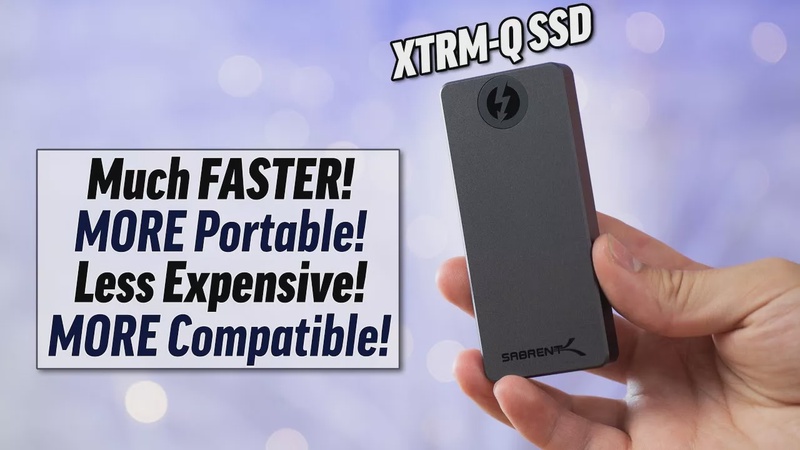 When Sabrent announced their Rocket XTRM-Q SSD drives, we instantly pre ordered one, and then a couple of weeks later, they reached out to us and offered to send us a couple of these drives, which we obviously accepted. So, we have the 2TB and 4TB models that we’ve been testing, and so far, we’re extremely impressed because they support very fast Thunderbolt 3 speeds, just as you’d expect from an SSD that’s built into one of Apple’s modern Macs or a high-end Windows machine. But compared to Apple’s SSDs, the Sabrents are better!

First of all, because of the price. Here’s a side by side chart showing how much money you save compared to Apple’s storage upgrade prices on the 2020 5K iMac

that’s a savings of $800 for an 8TB drive. On top of that, it’s nearly impossible to take an Apple SSD off of a Mac thanks to them either being soldered on or controlled by the T2 chip, so if you get one of these external Sabrent drives, you can take it with you when you eventually upgrade to an Apple Silicon Mac in the future. And to make it even better, these Sabrent drives support both Thunderbolt 3 and USB-C ports, compared to a lot of other Thunderbolt 3 drives.

Whereas the Sabrent drives are actually gonna work with basically any modern computer like a Windows laptop or even an iPad Pro at a very impressive rated speed of 900 MB/s. So these drives are really the optimal choice for convenience going into the future, especially since it’s one of the few drives available right now that you can actually get with up to a massive 8TB of storage.

With all of that said, let me finally get into reviewing the drive itself, starting with the design and portability.

The build quality is really nice with an aluminum finish all around the SSD, and the design is very subtle and clean, with nothing but two logos on the top, one for Sabrent and one for Thunderbolt. On the underside, there are two rubber strips that stop the aluminum SSD from sliding all over your desk, and they also help keep the finish looking great.

The included 3-foot Thunderbolt 3 cable also matches up to the dark grey aluminum finish quite well. And for being able to support up to 8 GB of storage, this SSD is incredibly compact while also feeling solid with a nice amount of weight to it. This is probably due to the thermal pad that’s included inside the enclosure for heat dissipation, which we’ll get into in just a minute.

And because of the slim and compact design, you can easily slide this into your pocket or throw it into your laptop bag to make for the most portable high capacity SSD out there!

Let’s finally get into the technical side of this storage drive. Plugging it in for the first time, it worked exactly as I expected. A blank drive with 4 TB of capacity ready to use at any time, no driver installation or reformatting required, and the best part of all is that it doesn’t require external power like some other drives do. And getting into the performance of this drive, we ended up running the same transfer stress tests that we ran for one of our videos where we compared the most popular portable Thunderbolt 3 SSDs in 2020.

Running the Blackmagic Disk Speed Test, the other 1TB drives were faster than this 4TB one in terms of read speed, and the story was actually the same for the write speed

being slower than those drives, but wait, don’t judge a drive by its benchmarks, because this one is actually much faster for large transfer.

The reason for that is something called SLC cache, which basically means that it can write a certain amount of data really fast before it slows down, and they do this to make the drives more cost effective.

So looking at those other drives, you only get those high transfer speeds for a limited amount of data transferred

like only 20 GB on the G-drive, and about 48 GB on the Samsung X5 SSD. So basically, if you’re transferring a file from your computer to the drive that’s larger than that amount of SLC cache, then the transfer speed actually slows down

like in the case of the OWC drive slowing all the way down to a minimum speed of 950 MB/s write speed after 30 GB is transferred. So we ended up transferring a large 172 GB file to each drive, and the differences in SLC cache and minimum speed caused a huge difference in the amount of time for the transfer to finish.

This is where Sabrent’s XTRM-Q drives come in. Both of them, even the 2 TB model, finished the test in only 1 minute and 27 seconds, beating out all of the other drives in real-world transfer speed

even though it was slower in terms of the write speed benchmark. That’s because there was no SLC cache limit in that test, running at full speed for the entire 172gig file transfer. So we ended up transferring a much larger 400gig file and we were surprised to see that it transferred the entire 400 GB without hitting an SLC cache limit, and we saw the same results for the 2 TB model. And as soon as that finished, I ran that transfer again, and for about 20 seconds, the write speed went down to around 1400-1500 MB/s before going back up to the full speed for the rest of the transfer, so that’s super impressive!

And to make these Sabrent drives even better, they support both Thunderbolt 3 and USB-C at the same time, and out of those 4 drives we tested, only the Lacie drive came with that same support.

So we transferred that 400 GB file on the Lacie drive and it took almost twice as long as the Sabrent drive because of it’s SLC cache limit slowing down the write speeds.

Based on all of those tests, these Sabrent drives are actually faster than those 4 drives in terms of real-world transfer speeds, and to make it even better, it’s much less expensive as well!

The 1TB model is only $220 compared to a huge $402 for the LaCie drive, and it’s even less expensive than the OWC drive which we had many issues with

and even though its SLC cache is lower than our 2TB and 4TB models, it still smokes the more expensive drives.

and interestingly, the 2TB Sabrent is actually closer to the price of the 1TB versions of the other drives

so we would recommend the 2TB model since we didn’t hit an SLC cache limit even after 400GB.

And out of all of those drives, the Sabrent is much more portable and compact, and it’s the only one available with a massive 8TBs of storage for $1600, which sounds expensive, but it’s $800 less than Apple charges for an SSD you can’t even remove and take with you.

So with all of that said, let’s finish our testing with how this Sabrent drive compares to the custom SSD that we built. Well, that custom drive was actually 23 seconds faster in our 172GB transfer test

and that’s because the write speeds were faster than on the Sabrent drive.

However, there are a few major drawbacks with our custom-built SSD that outweigh the faster speeds. The main one is the price, for both the enclosure and the 1 TB SSD, you’re looking at $330 for the custom drive compared to only $220 for the Sabrent drive. And of course, it’s already pre-assembled so you don’t have to open it up and install the drive yourself.

But the biggest drawback is the fact that the custom drive only supports Thunderbolt 3, while the Sabrent also supports USB-C, so we were able to hook it up to our iPad Pro, and THAT level of convenience is why we recommend it over the custom SSD. So with all of that said, we can safely say that these new Sabrent XTRM-Q external SSDs are by far the best bang for the buck drives we’ve ever used, easily outclassing the most popular Thunderbolt 3 SSDs, and even being a better choice than our custom-built drive.