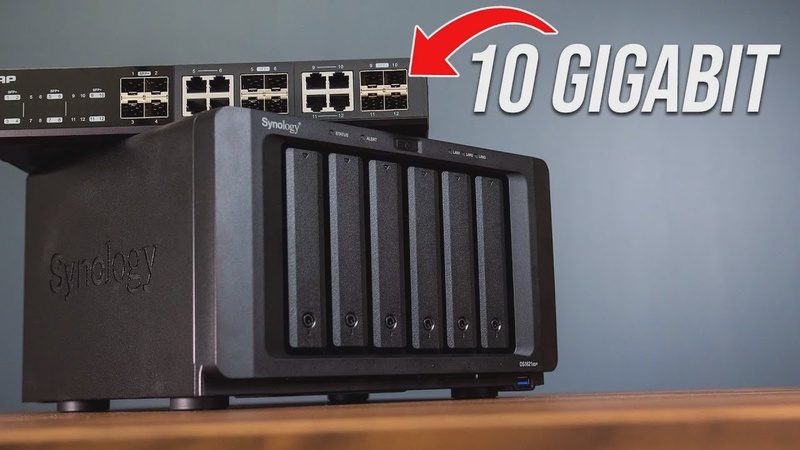 I’m making some big changes to my home network and NAS setup which should save me a lot of time when testing laptops. Synology sent over the 6 bay DS1621xs+ NAS, and I’ll be using 4 16TB Seagate NAS drives for it in RAID 6.

My older NAS was a larger 8 bay unit, but I had 8 4TB drives, so this is offering me more space with half the drive count while still having some room to grow. It should hopefully last a while, but I do create about 50gb of video content each week.

A rough diagram is probably going to be the easiest way to explain the differences between the old and new setup.

Alright, so I’ve got the old setup on the left, and new setup on the right. The main difference is that with the old setup I’ve got the PC directly connected to the NAS with a 10 gig connection, and that’s just because before now I didn’t have a 10 gig switch, and this did the job. Now both PC and NAS are also connected to my 1 gigabit switch up here, and that connects out to the Wi-Fi and Internet and all that stuff.

This is also where all my test machines connect to, so all my laptops and test PCs, and these are limited to 1 gigabit speeds of this switch. Now every time I test a gaming laptop I need to copy 2TB of files from this NAS over to the test machine, and as you may have noticed, I test a lot of laptops, and it’s actually pretty common for me to be copying to two machines off the NAS at the same time, which basically results in this 1 gig connection becoming the bottleneck.

So the two machines that I’m copying to over here will only get about half 1 gig speed each. Now of course with the new setup with the 10 gig switch this isn’t an issue. I can have two 1 gig systems copying off the NAS at the same time, as this is now 10 gig, so it’s not a bottleneck - or at least one that I’m pretty unlikely to hit. It’s also beneficial for some of the newer laptops that 2.5 gig ethernet connections.

Again I need to copy 2TB of games off the NAS for each laptop that I test, so now if I have a 2.5gbe laptop I can take advantage of that and speed this process up. Basically this just means the rest of the network gets much more bandwidth to the NAS compared to just being limited to my PC only.

Now in the future I also plan on setting up a dedicated Wi-Fi 6 network that connects directly to the NAS with the 10 gig link.

Wi-Fi testing is an area that my laptop reviews have been lacking, and that’s simply because there aren’t that many access point that have a port faster than 1 gig Ethernet, because that ends up being slower than the Wi-Fi 6 speed, so it would result in a bottleneck. I don’t yet have the Wi-Fi router available that I want as it’s coming to Australia early this year, but basically the plan is to hook it up to this and then run an iperf server on the NAS.

Now this Synology NAS has one built in 10 gigabit port, which I’ll be using to connect to the 10 gigabit switch.

Instead of connecting the Wi-Fi access point to the switch and blow one of my few expensive switch ports, Synology sent a dual 10 gigabit PCIe adapter, so it is possible to install add on cards like this to expand the capabilities of the NAS.

They’ve also got another one that lets you connect an M.2 NVMe SSD to act as a cache.

Speaking of cache, this Synology NAS model allows you to install two M.2 NVMe drives, you just need to take out the drive bays to install, no tools required, they just clip in place. You need two SSDs for a read-write cache, or one for a read-only cache. I’m just using a 1TB SSD from ADATA, but Synology also offer cache drives with protection from power loss. The downside is these cache drives have slower speeds, but they offer better reliability so that’s the trade off.

As I run my NAS on an uninterruptible power supply, basically a big battery, I’m fine with instead preferencing performance, granted unless I use two SSDs I can’t write to the cache anyway, so I shouldn’t have important data to lose in there.

Just as a quick test, here are the crystal disk mark results over 10 gbit connection to my old NAS.

With the new NAS we’re looking at double the sequential read speed even without any caching,

then with the read cache some of the reads improve a little, but not too much in this particular test.

Being able to cache frequently accessed files should speed things up, especially when we’re not limited to a 1 gig ethernet network, though that said, in the tests that we just saw I wasn’t seeing too much difference, at least in Crystal Disk Mark. I might just need two drives to be able to take advantage of the write cache.

The memory is also easy to upgrade, there’s a little hatch underneath that’s held in with two screws which gives access to two memory slots.

Mine came with one 8 gig stick of ECC memory, to get another ECC stick is around $180 USD, so I might do that in future for dual channel if needed. The Intel Xeon processor is soldered to the motherboard, so no upgrades there. It seems to be a 2015 model, but at least it has hyperthreading unlike my older 2012 CPU in my older NAS.

I don’t really do heavy processing on the NAS itself and this has been fine for me. I’m using my drives in a RAID 6 array, so two disks worth of space are lost for backup essentially, but this allows for up to two drives to die at once without data loss.

In addition to this, I’ll setup my older NAS as a local backup target, that way everything from here can copy over to that each night over the 10 gig network.

Like other NAS solutions out there, Synology lets you install apps to add more functionality. I’ve installed the Amazon Glacier app to backup important files to the cloud each night. Although each NAS can sustain two drive failures at once, RAID still isn’t a backup, but given I’ll have two separate NAS machines storing the same data each in RAID 6 and backing up to the cloud, I think I should be pretty safe.

Another thing I use my NAS for is for streaming TV and movies. Yeah there are online streaming services, but I have my own collection too, which is easy to view on my 65” LG B9 OLED TV with Plex media server, another application that is readily available to install on the NAS. So with the new NAS I’ve got more storage due to the larger drives, I’ve added SSD caching to help improve performance, I’ve moved up to a 10gbit network with this switch to improve my network transfers, I’ve got everything backing up to the cloud, and at the end of the day I can kick back and watch stuff with Plex. You could even run your games off the NAS too. I’ve actually got a separate video here where I compare the difference between running games on a NAS or a local machine, definitely worth checking out if you’ve got a huge game library, so I’ll see you over in that one.