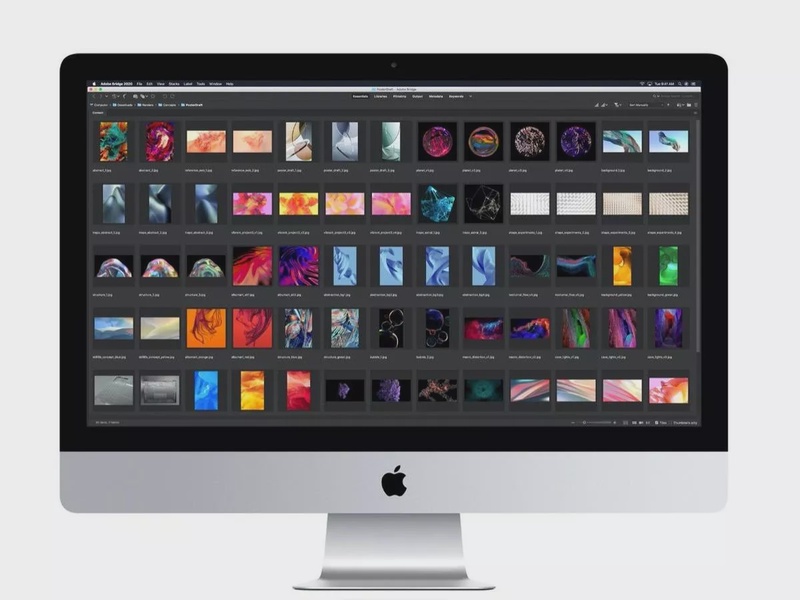 To create something that's genuinely new, you have to start again. And that's very hard to do. So hard in fact that Apple is still working on it. So until then, they'd like you to please, please buy the new iMac anyway. Even if its future usefulness is going to depend on third party app developers. Besides, why would that bother you? If you think about it, you're not really paying for a computer. You're paying for an experience. One unlike any other experience, the experience of buying a brand new machine, that's dead on arrival. And I think that's really special.

This year's iMac sports a surprising number of true meaningful improvements over previous models. We get an obligatory spec thump, allowing it to be equipped with up to Intel's latest 10th gen 10 core consumer CPU.

That's going to make the iMac Pro sweat a little bit, given that even if you kit that thing out with 18 cores, they're going to be older, slower ones, making the decision to go iMac over iMac Pro even more appealing, 10 gigabit ethernet is now available for a reasonable $100 extra, making almost the entire Mac lineup capable of high-speed backups and working with heavy media projects over a network connection. Great job, Apple, but like, no really, for real. And it's still stuck with eight gigs of DDR4 2666 memory out of the box, but it's user upgradable, and we get options for up to eight terabytes of storage. And, oh yeah, there's Bluetooth 5.0 support, which is a nice to have, even if it's unlikely you'll notice much of a difference, given that AirPods Pros already work with Macs running Catalina and 2019 iMacs reportedly already had the hardware for it without most people noticing.

It's certainly not the most exciting looking machine. And I honestly don't think that Apple will have any incentive to make one that is exciting until they can launch an all new model running Apple Silicon, the improvements over last gen kind of just keep rolling here. It has a nano texture glass option, which is pricey at $500. But in my experience with it, provides a surprisingly effective anti-glare effect without causing major sparkling like LCD coatings tend to, and finally the webcam and microphone have been upgraded. The timing for this really couldn't have been better, given the way that telecommuting has increasingly become the norm. Now it's worth noting that if you opt for nano textured glass, it is going to stand out a little, but not nearly as much as a notch or a whole punch camera on a smartphone. So I'm going to give Apple a pass here.

So great machine then, right? Go buy it today, right? Well maybe, but before you do, there's some stuff you should know.

Over the next two years, Apple is going to transition its hardware away from Intel X86, which means that all Apple software will run on their own arm based chips, creatively dubbed, Apple Silicon. This means many things, but the most important for now is that app compatibility is going to be a huge focus going forward, so much so that Apple has created two compatibility layers to address it Rosetta 2 and Universal Binary 2. The first of those allows the new arm chips that are coming to run existing X86 software. The latter allows a developer to bundle an arm and X86 version of their apps in a single package that should be natively compatible with systems running either architecture.

Now you'll notice that Rosetta 2 only goes one way, and that could be a major problem.

While Apple could support universal binary two for as long as Intel based Macs have official support, likely to the end of 2025 or so, based on past trends, it's actually up to individual app developers, whether or not they want to provide support for it, which if you're old enough to remember the transition away from power PC towards Intel X86, you'll know means that you're almost definitely going to get inconsistent levels of support from one app to another. And this time around it has the potential to be even worse.

Because our Macs can run iDevice apps directly, developers may be incentivized to develop for that platform first with your legacy Intel Mac, as an afterthought. All of this is to say that if what you love about the Apple ecosystem in general and Mac in particular is that it just works, the 2020 iMac, and I mean, really any Intel Mac from here on out is practically speaking, dead on arrival. You're definitely going to get about two years of the experience that you expect out of them, give or take a year. But beyond that, it is a gigantic question mark.

So instead of just a normal review, let's look at this machine from the perspective of a potential Mac buyer and see if we can make some predictions for how the truly next generation iMacs will look, and whether they're worth waiting for.

First, I don't see these massive bezels or the Apple chin bar sticking around for much longer.

While Apple might not adopt all of the industrial design of its Pro Display XDR, if I was a betting man, I'd put my money on Apple's next iMac to look a little something like this

all business on the front, machined aluminum on the back, but with a more traditional iMac style stand.

While the Pro Display XDR is rather flat on the back, I would also expect Apple to adopt the look more akin to the MacBook, flattened chamfered edges with a subtler curve than the current iMacs rather bulbous shape.

Moving on, I doubt Apple will run their shiny new Apple Silicon at the same kind of red line that they've been forced to with Intel machines, like our 2020 iMac here. Now they have employed some clever tricks to improve the experience somewhat, like factory under vaulting with direct control over VRMs, custom fan and performance curves, and more. But at the end of the day, this machine still spikes up to 99 degrees when you fire up an intensive CPU bound application, a state that it can only maintain for a short while before it drops down to base clock, where it mercifully runs at a mere 90 ish degrees.

This differs from past behavior though, which an optimist might say shows that Apple is finally taking the thermals and longevity of their machine seriously or a cynic might say is probably more about quietly kneecapping the Intel Macs to make the upcoming arm based ones look better. For my part, I wouldn't be surprised if it's all a little bit of both.

While we don't have any firm data on what performance or thermals will look like on Apple Silicon, we need look no further than the iPad Pro to get some hints. That's a tablet with no active cooling whatsoever that can pull off laptop like performance and crucially sustain it for long periods of time.

Finally, I doubt that Apple is going to settle for performance that's just as good. Our iMac's 10 core CPU does manage some decent numbers

So we can see it here, where they allow the thermals to spike in the hope that the load will be a short one and that the CPU will race back down to idle.

This actually works out for them in some scenarios, like Photoshop and Final Cut

but it absolutely kills performance in longer running benchmarks like Blender, where the core clocks drop way down to base clock.

The GPU for its part is still good or as good as a mid range consumer card with pro slapped onto its name can be.

But between Apple's experience with building mobile GPUs in developing the low level metal and metal to APIs, and in building the afterburner accelerator card for the Mac Pro, they may have all the tools they need to be self sufficient here. This one's actually a bit of a wild card, but that's still in the future. We still can't say exactly what an Apple Silicon iMac will look like, which is why buying any Intel based Mac today is going to be a bit of a crapshoot.

I am hoping that Apple's ongoing support for these devices stands out from the rest of the industry, kind of like their iPhone support does. The issue is that so far, they've only made vague commitments, like for years to come. How many years? Remember back when Apple transitioned away from power PC? MacOS 10's first universal binary format only lasted from 2006 until Apple killed non-Intel support at the OS level with Snow Leopard in 2009. If I was buying a shiny new Mac today, I'd want something, a little firmer. With that said, if I needed to buy a desktop today and it had to be a Mac for whatever reason, this one actually looks pretty good, ignoring the, well, moon logic pricing for some of the upgrades.