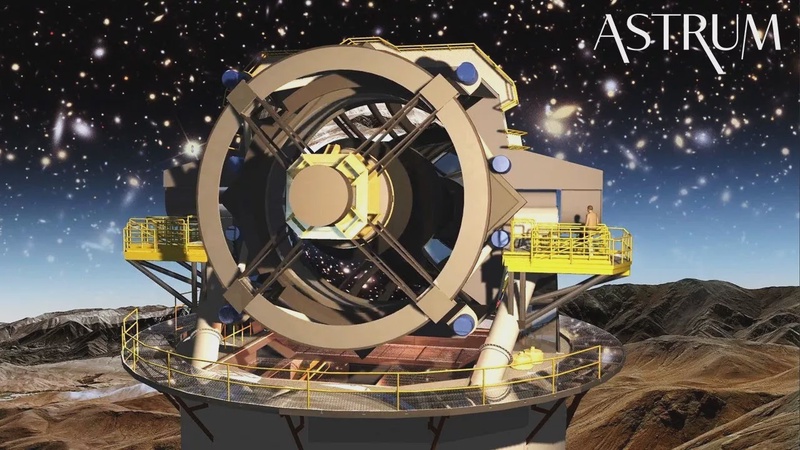 We are all, in my opinion, rightfully excited about the James Webb Space Telescope launch in 2021. Such a powerful space telescope will allow us to see things extremely far away with a heretofore unprecedented fidelity. However, there’s another telescope also due to be completed in 2021 that no one is talking about, even though it is the top-ranked ground-based project in the Astrophysics Decadal Survey of 2010. What is it, and what does it do? Why do astronomers consider this project to be quite so important?

Very interestingly, the Rubin Observatory is not connected to a major space agency. Funding has actually come from the United States’ National Science Foundation and Department of Energy, and the management is overseen by the Association of Universities for Research in Astronomy.

Also, it’s being built in Chile, the location of many ESO telescopes, but these aren’t connected. Chile just so happens to be an amazing place for a ground-based telescope, with its high mountain range and little to no cloud cover.

This is important, because the Rubin Observatory’s primary goal is to survey the entire visible sky every few days. It will do this with its incredible 8.4 m mirror and 3.2 gigapixel camera.

Just to give you some perspective, the mirror is the width of a tennis court, and the camera is the largest ever constructed. It’s 3 m long and about 1.6 m wide.

The lens of the camera allows the telescope to view 3.5 degrees of the sky at the same time.

This is a giant area of the sky; the Moon and Sun are only about half a degree across. This camera is also capable of viewing from the near ultraviolet to the near infrared wavelengths. It does this with a robotic arm that changes filters placed in front of the sensors. You see, certain objects or events that happen in our sky are brighter in specific wavelengths of light. But what is the Rubin Observatory designed to look at?

Because it’s conducting a sky survey, it’s looking out for pretty much everything. It’s particular science goals are to look out for:

There have been plenty of sky surveys in the past, notable mentions are the impressive works done with Gaia, Pan-STARRS, DESI and the Sloan Digital Surveys. These are been extremely useful in mapping our surroundings with extreme accuracy, cataloguing galaxies, stars and asteroids.

With its wide field of view, gravitational wave events that are detected by LIGO might be visible in an image taken by the Rubin Observatory. LIGO is also predominately a National Science Foundation project, a very special type of observatory that uses mirrors spaced four kilometres apart which are capable of detecting a change of less than one ten-thousandth the charge diameter of a proton.

These changes can occur as gravitational waves pass through the facility. The sources of these waves come from really big events, like neutron stars or black holes colliding, which creates a ripple in spacetime that propagates outwards from the location of the event. These events are usually so far away that by the time they reach us, we need a sensitive observatory like LIGO to even detect them.

Gravitational waves travel at the speed of light, so if we detect the gravitational waves, there should also be light coming from the source. With such events, we only roughly know the direction of where it could have come from due to the way we detect the events with LIGO, so to visually see it with a telescope, time is spent scanning the sky, by which point we may well have missed it.

However, if you have a telescope capable of seeing a big chunk of the sky at the same time with a super high resolution camera, you can take lots of photos and search the data later to try and locate the event and see if it was visible.

So, how will it be able to achieve these science goals? The telescope will typically observe a section of sky for 15 seconds. A 15-second exposure is a compromise between being able to see faint objects like distant stars and moving objects like asteroids. If you have much more of an exposure, you may see more faint objects but streaks across the image will ruin the shots from the moving objects.

In order to eliminate the noise from cosmic rays hitting the camera sensor, two images of the same region will always be taken and can then be merged. The camera’s images will be so large that a year’s worth of data will come to about 1.28 petabytes. And because the observatory is located in Chile, and the data processing facility is in the States, a special 100 Gbit/s internet connection had to be specially built between the two locations.

Unfortunately though, there is a pretty major problem coming up that designers may not have fully envisaged when in the planning and early construction phases of this project. Any guesses to what would affect a highly sensitive ground-based telescope that wasn’t such an issue 10 years ago? Not pollution, not light from cities, but actually the tens of thousands of cube satellites currently being launched into space from the likes of SpaceX and Amazon.

If a satellite passes through an image, it will ruin the exposure because it is so bright compared to the dimmest objects the telescope is looking for. As a result, SpaceX have committed to painting their future satellites black or send them up with a kind of sunshade to reduce how bright they are, but this certainly won’t negate the problem. And in reality, low-Earth orbit is only going to get busier. This puts a serious dampener on the future of highly sensitive ground-based telescopes.

In reality, the serious issue here is that there are currently no internationally agreed regulations about what can be put into LEO, it’s the wild west right now. Not to mention how this increase the chances of Kessler syndrome. But all in all, this is a very exciting project, and even with these obstacles, I’m sure it will acquire a wealth of valuable data. Perhaps it will even witness events we have never even conceived possible before!

So, there we have it, an insight into the most exciting telescope that hopefully more people will begin talking about.

Why We’re Seeing More Gravitational Wave Events Than Ever Before