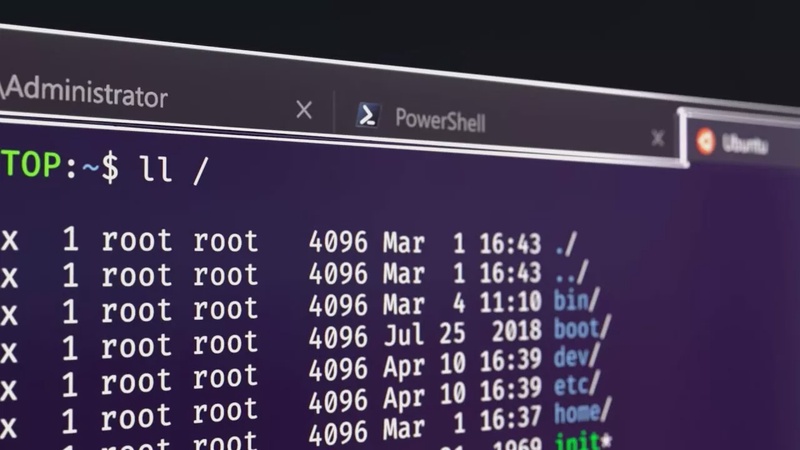 The Windows command prompt. My old friend, you have not aged well. This is a relic from another era, and now it's had an upgrade! Welcome to the Windows Terminal.

DOS is the Microsoft operating system that existed before Windows. It was a command-line operating system. You typed in text and the computer responded with text. That's as fancy as it got.  Windows has matured quite a lot since then, and most people don't interact with the command line anymore. That's most "normal" people anyway. IT admins use it a ton, because it's great for automation.

In a modern Windows operating system, that command-line interface is provided by the Windows command prompt; but why is it still so... old? One of the primary reasons it exists is for backward compatibility. A lot of places have built up tools and scripts over the years that inherently assume the behavior of the command line doesn't change. Some businesses run on these things behind the scenes. I'm not even talking about scripts that haven't been migrated to PowerShell. I'm talking about scripts that haven't even been properly migrated to Windows yet! A lot of businesses are still reliant on the old DOS command line from before Windows NT. For the youngsters in the audience, Windows NT came before Windows 2000, which came for Windows XP. I'm sure you've heard of XP, right?

Windows 95 and 98 were the consumer versions which ran parallel to NT, but were actually based on DOS. We don't talk about Windows ME. If you work in IT and can't believe people are still reliant on such outdated technologies, just check your network for batch files with the extension ".BAT".

If you've got any (and i know a lot of you do) then you're part of the reason we need this legacy stuff. ".BAT" means a script is intended for the old 16-bit DOS world. Anything in NT or later should be using a ".CMD" extension. ".BAT" scripts still work, but only thanks to backwards compatibility. This is why the Windows command prompt sucks. Even in Windows 10, it needs to behave like an obsolete operating system from the early 80s; because if Microsoft change it, it could wreak havoc across the globe.

Time for a quick terminology lesson, here. The command line is actually composed of two distinct components. The bit you type into is called the "terminal", and the back-end piece that does all the processing is called the "shell". Sorry Linux peeps - I know that's a simplification, and Windows now has a pseudo console as well; but for the purposes of this article we don't need that level of detail.

This goes back to the early days of computers, when people sat at a dumb terminal which was basically just a keyboard and monitor attached to a cable. The computer was separate.

When you typed, the characters from your keyboard were sent to the computer. When the computer responded, it sent a stream of characters back to the terminal, which displayed them on the monitor. If you go back even further before monitors were common, then the terminal would output the character stream onto a printer instead. These days we don't have physical terminals. Instead, we have terminal applications which do the job of the physical terminals people used to sit at. The Windows command prompt you see on-screen and interact with is actually a terminal program called the "Windows Console". It connects to a shell called the "Command Prompt" that does the actual processing. PowerShell is a much more modern shell on the back-end, but the terminal application you're interacting with is still the same Windows Console application.

We know why the old shell needs to stick around, but why is the terminal app, that Windows Console not evolved? It has, actually. There have been a number of improvements over the years, but there's still that issue of backward compatibility. If Microsoft change it too much, stuff could break. If they do something that changes its performance, that could cause a critical system somewhere out in the world to go horribly wrong. Seriously, that stuff happens.

This is just a terminal. It's the bit you type into and read text from. The default shell it connects to is PowerShell. I said "default" because it's not tied to a particular shell. You can use it to connect to PowerShell, the old command prompt, Bash... You can read this article about running Linux inside Windows 10. The Windows Terminal will automatically discover any Linux distributions installed in WSL and will add them to your new tab drop-down list as well. Because, yes. The Windows Terminal now supports tabs. No need to have a ton of command windows open. But that's only the beginning.

You can customize just about every part of this Terminal. You can change colours, create custom tab profiles, you can even split it into multiple panes. It's all controlled through a JSON settings file. Now there's loads you can do here, and walking through all of the options we get quite boring. I'll leave you to do that in your own time. Instead, I'm going to quickly apply some settings i made earlier; so you can see some of the possibilities.

The first thing you probably noticed is that the background of my PowerShell window turned blue, and then translucent. There are a lot of graphical tweaks you can make to this to personalise your terminal. Some are just for fun, like the retro look I've given the old command prompt. Others are a bit more practical.

You'll notice Ubuntu and Kali in the drop-down now have icons specific to those distributions, rather than a generic Tux the penguin.

If I open them, you can see I've applied a custom background image as well. So if I'm working with multiple tabs here, it's easier to keep track of which one I'm in.

Just to confirm, though; that is Kali Linux, running on the Windows Linux kernel, in WSL2.

As well as graphical customisations, there are some interesting functional tweaks you can do as well to make life a little bit easier and improve your workflow.

Take Nextcloud profile, for example. If I open that, it's not running in WSL. That's a separate Linux server in my lab. The profile I've created for it in the Windows Terminal is connecting an SSH session so it behaves as a remote terminal to that server. Just to confirm, that's Centos 7 using its normal Red Hat derived kernel.

It's not running in WSL. You could do the same thing for Windows servers using remote PowerShell, too.

Speaking of PowerShell, you'll see I've created a few profiles for Office 365 and Exchange. If I open the Office 365 one you'll notice a bit of initialisation going on in the background.

This profile is opening PowerShell, then running a script to connect up to various Office 365 services. So if you're an Office 365 admin, a profile like this could save you creating a bunch of remote connections manually, and authenticating to all of them.

Once this opens, I have direct access to Azure AD, Exchange Online, and Teams; and of course it's your script so you can add whatever services you want into it.

This sort of thing could be handy for someone who administers a hybrid Exchange infrastructure.

These are all just examples, of course. I'm not trying to provide an exhaustive list of customisations - more give you a flavour of what you could do. If you look online you'll see some creative uses of terminal customisation. It supports Unicode and custom fonts; so you can have smileys, icons, and all sorts in it. Soon it will have support for clickable hyperlinks and rudimentary animations as well. If you find yourself using a lot of command line - particularly remote SSH or PowerShell management; there's potential for you to mould yourself a nice little time-saver here with custom profiles.

I was specifically asked about performance. Is there any performance advantage using the new Windows Terminal over the old Windows Console? There are definitely efficiency benefits to be had, but in terms of computing performance... "yes"... but probably "no". Remember that the terminal is just an interface. All of the actual computation happens via the shell, and that hasn't changed; whether it be PowerShell, Bash, or the old command prompt. The new Terminal does use GPU acceleration to draw its text, which allows it to be prettier, and in theory I guess... faster? If you're one of the people who rushed out to buy a brand new RTX 3080, you can use that to accelerate text rendering in the Windows Terminal. I'm not sure that justifies the purchase by itself, though; and no telling your mum I said you need it for homework!

In all honesty, the performance bottleneck is probably going to be the shell end and not the terminal. I do vaguely recall a script years ago that actually ran faster with the command prompt minimised, because it didn't have to draw the text; but even dumping text out as fast as i could, I couldn't see any performance difference between the old Console and the new Terminal on my current system. So I'd look at this more as a feature that will make your terminal prettier, rather than something that'll make your scripts faster. More efficient scripting and multi-threading is what will really make a difference to your script performance.

It would be remiss of me not to mention that the old Windows Console does support some graphical customisation, too.

Hence why PowerShell normally opens with a blue window instead of a black one. Admittedly, it's nowhere near as customisable as the new Terminal, but you can guarantee if i don't mention it, someone in the comments will.

Speaking of which... if you find a useful customisation for the Windows Terminal, let us know in the comments.

Jacob Enderson in Windows
20 May