The Viewsonic Elite XG270QG is one of the best 1440p gaming monitors I’ve ever tested, let’s check it out and find out why that’s the case in this review. 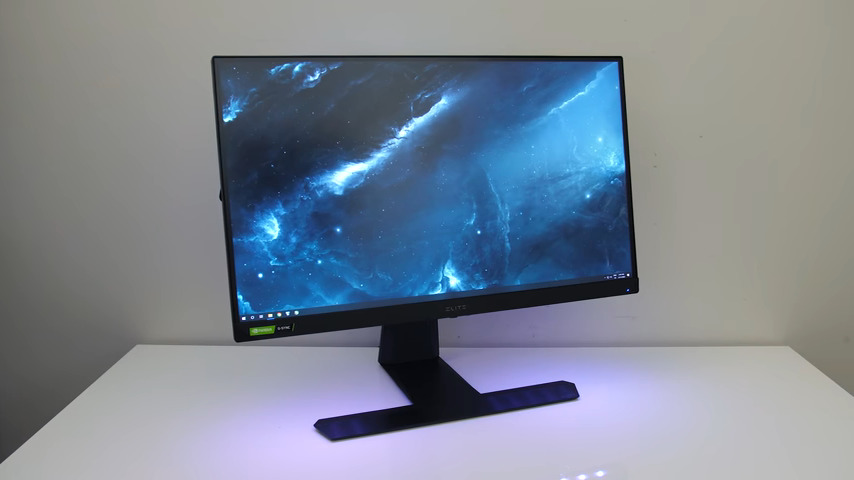 The Nano IPS panel is 27 inches (68.58 cm) with a 16:9 aspect ratio and runs with a 1440p resolution. It’s got a 165Hz refresh rate and a fast 1ms grey-to-grey response time with G-Sync support, so based on those specs it sounds like it’s got everything you could want for gaming.

To get games at high enough refresh rates at 1440p you’re going to need some decent power, I’ll be testing with my RTX 2080 Ti gaming rig with an 8700K overclocked to 5GHz. You don’t require Nvidia graphics though, I’ve also confirmed that I could use FreeSync with a Radeon RX 5700 XT, I can still get the full 165Hz refresh rate, and CRU reports the FreeSync range as 1 to 165Hz.

Viewsonic list that the monitor has support for 98% of the DCI-P3 colour space, though I got 93% with the Spyder 5, either way the results look decent compared to other gaming monitors I’ve tested, they’re even similar to some content creator targeted panels I’ve used.

The contrast ratio is listed as 1000:1, however I measured mine at 620:1, which is on the lower side when compared to most monitors I’ve tested. 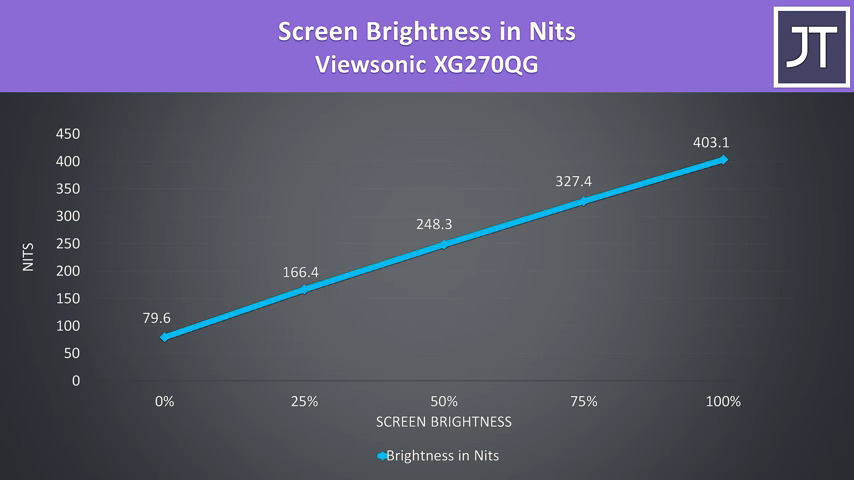 The brightness was fair, at 100% I measured it at just over 400 nits in the center, though the specs say 350 nits, so my panel might just be giving me a bonus.

I’ve run the UFO test to look for ghosting, and I didn’t think it was looking too bad in this test. 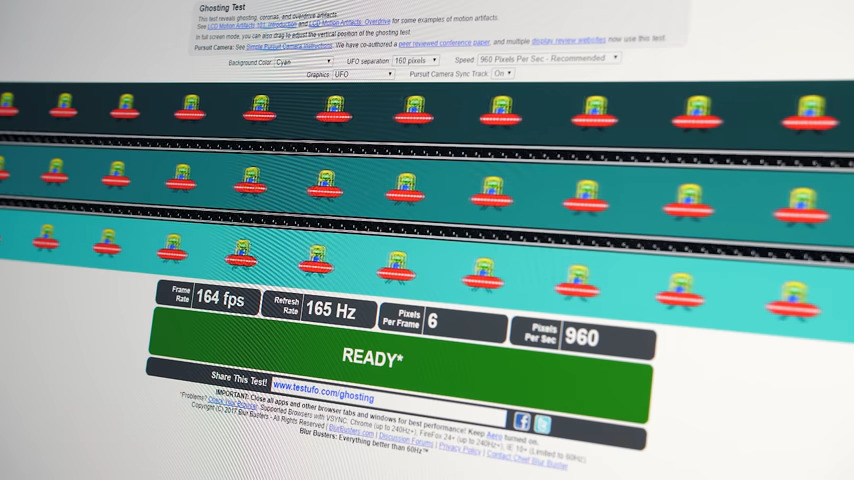 The bezels aren’t too thick, I measured them at around 1 cm on the sides, though I honestly can’t say I noticed them or really care once you get into a game. 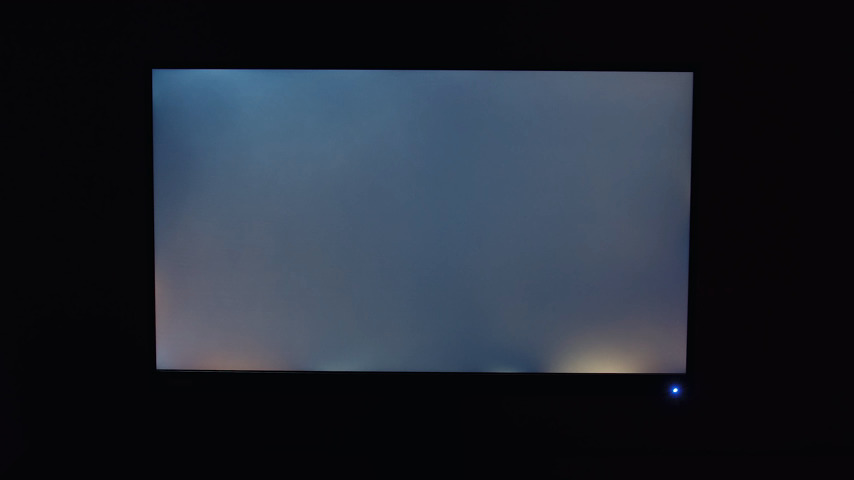 There was some backlight bleed, mainly towards the bottom corners, definitely not ideal, but I found it hard to notice when viewing darker content, and it will vary between panels.

It’s not all just about the panel though, the stand feels quite solid and has a brushed metal base, though the rest was plastic, at least on the exterior, and all with a black finish. 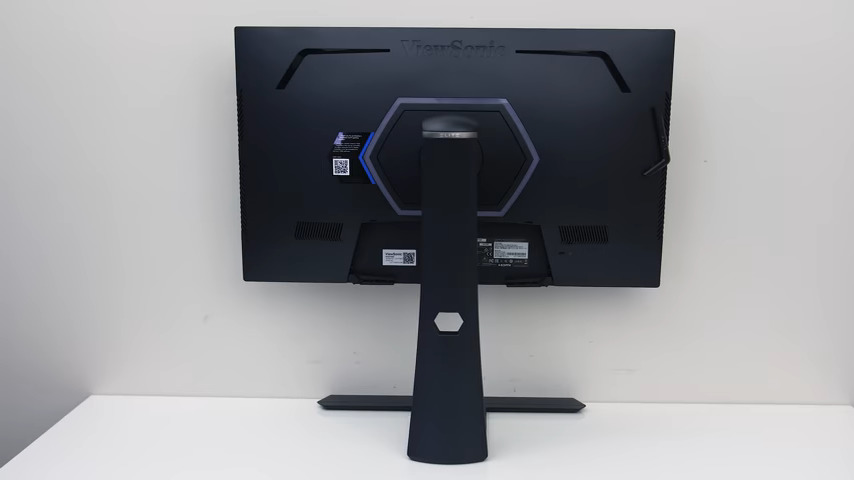 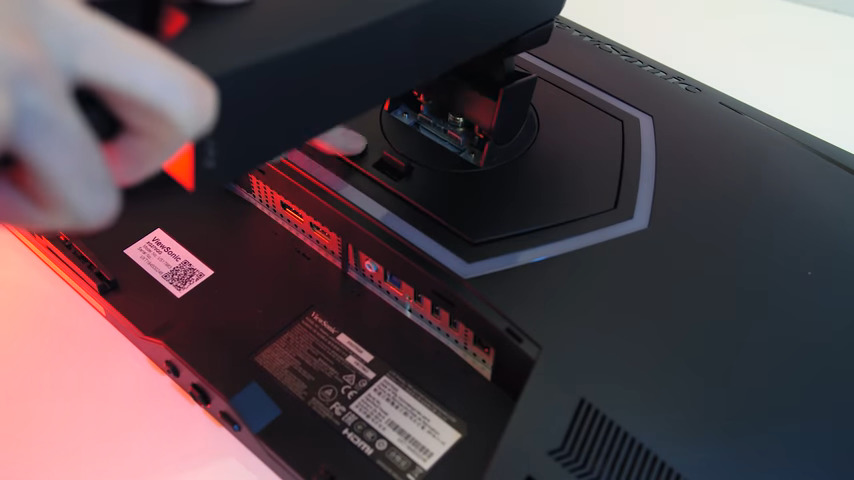 The stand connects to the back of the panel without any tools required, and behind this are four screws for the 100 mm VESA mount if you want to attach the panel to a different stand or monitor arm. 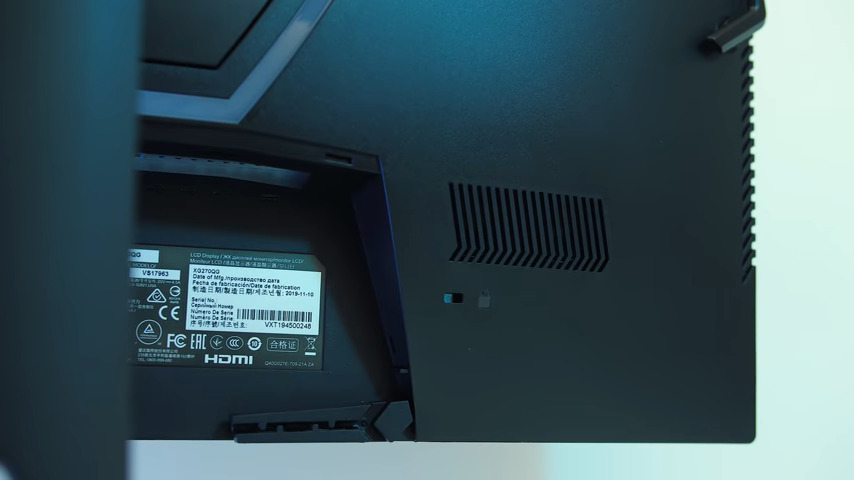 The back also features a Kensington lock towards the bottom on the right, along with speakers on the left and right, which I thought sounded quite good for a monitor, probably the best I’ve ever heard in terms of monitor speakers, they had some bass, were clear, and they got loud enough at maximum volume. 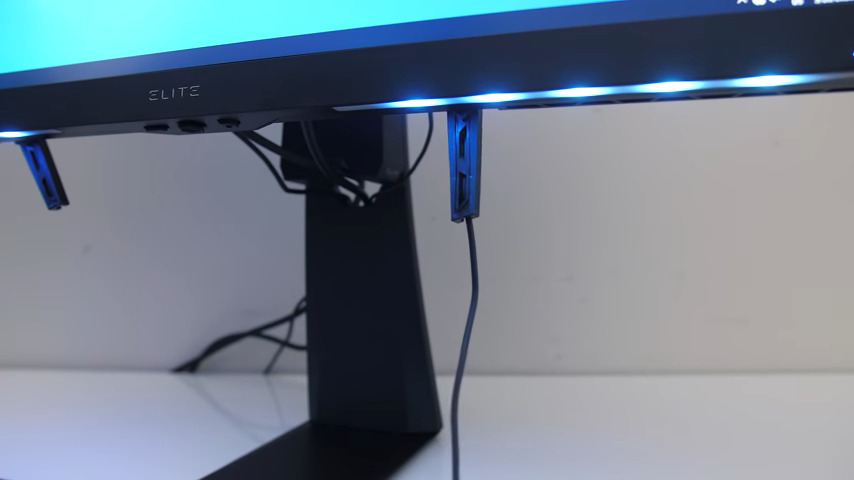 There are two rubber mouse anchors built in which you can pull down to put your mouse cable in to keep it out of the way, one on the left and the other on the right, so you’re covered regardless of which hand you use your mouse with. 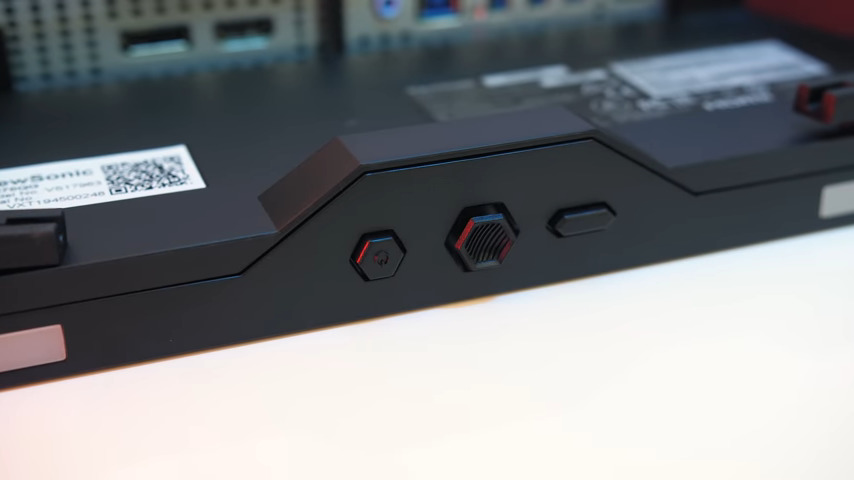 There are three buttons in the middle below the screen. These include a power button, the main joystick in the center for on screen display navigation, and a quick access button which by default turns the blue light filter on or off, however you can customize its function in the OSD. 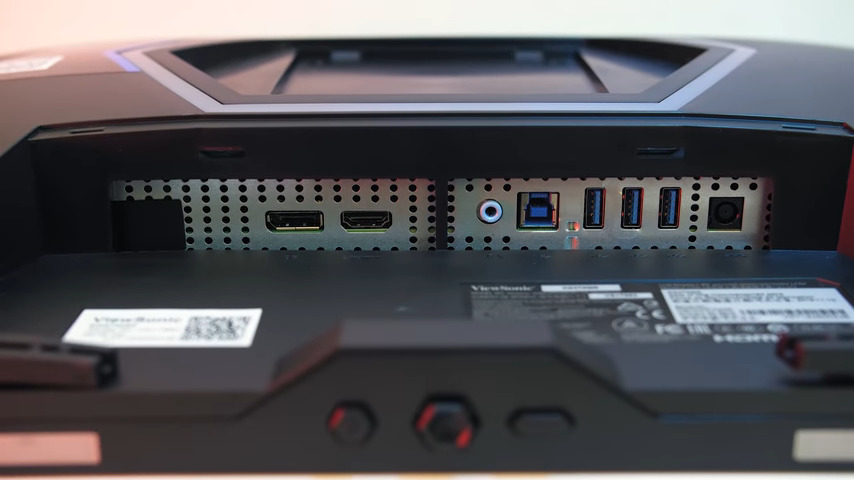 The I/O is on the back and faces down, from left to right we’ve got full size DisplayPort, HDMI, 3.5 mm audio output, USB Type-B which you connect to your PC to use the following 3 Type-A ports, and the power input. 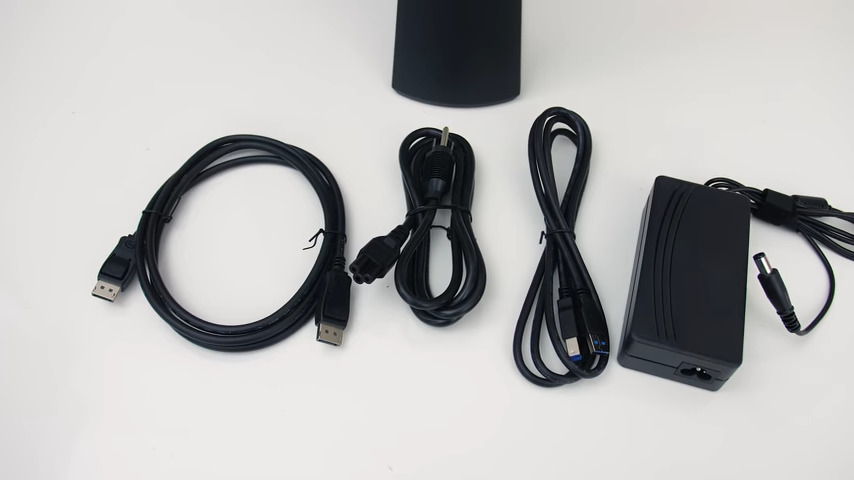 The cables included are full size DisplayPort, USB Type-B to A for the USB hub functionality, and a power cable and brick, unfortunately that’s not built into the monitor and is external. I was a little disappointed that HDMI wasn’t included, although when I tried my own HDMI cable it wouldn’t run at 1440p above 60Hz, and the overclock option used to enable 165Hz was greyed out, so seems like DisplayPort is required. 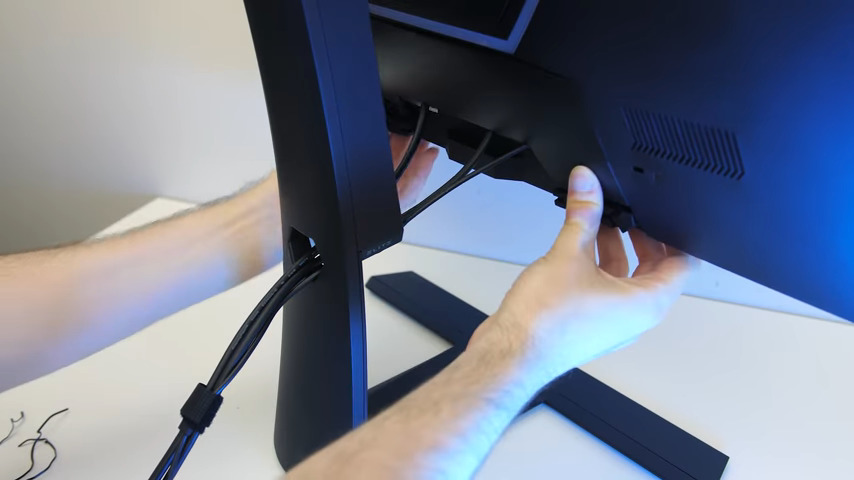 There’s a plastic cover that goes on top of the cables to keep the rear looking a little neater, and you can run the cables through the hole in the stand to keep them tidy. 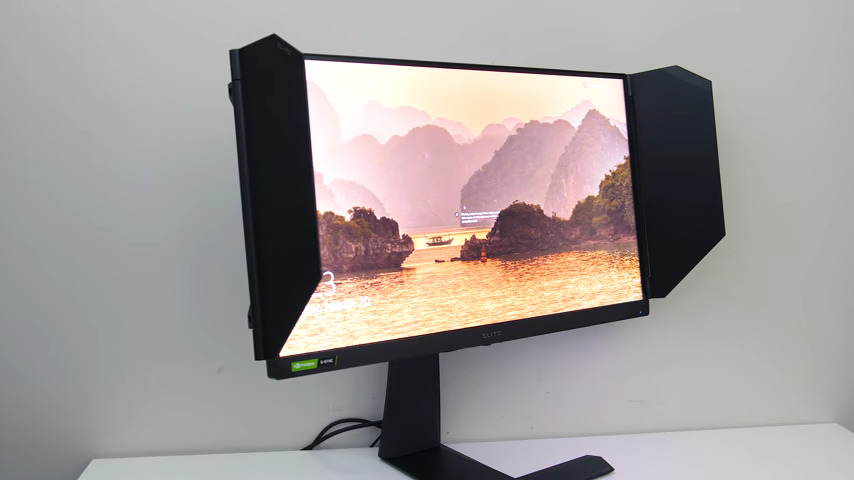 There are also optional plastic doors you can screw onto the sides, installation was easy, and they help reduce other light sources from hitting the display. 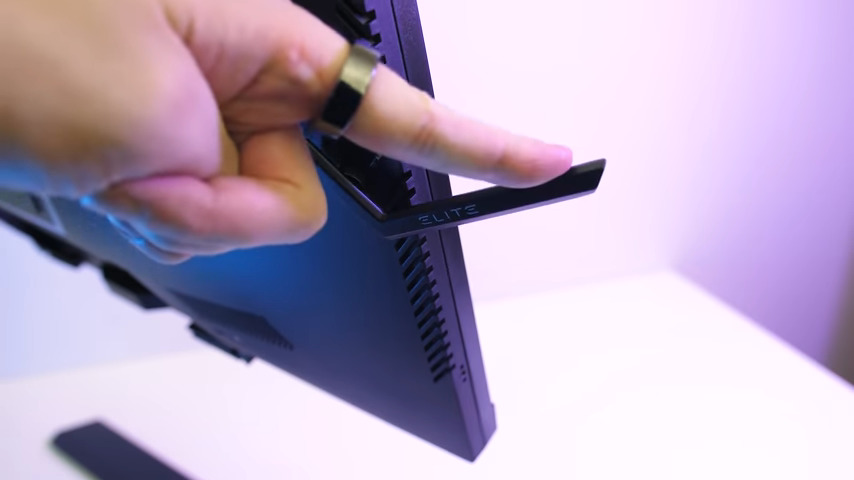 The left-hand side has a metal headphone holder which folds down if you need it, and you can still use it with the side panels installed.

The on screen display itself was easy to navigate through, but occasionally I would move to the wrong menu, not sure if I just suck as using this particular joystick or what.

There are quite a few options here, you’ve got to enable the overclock option to use the full 165Hz refresh rate, you can change the OSD timeout value, monitor color profiles, disable the blue power LED on the front, change RGB lighting and more. Speaking of that RGB, there’s lighting on the back in this hexagonal shape around the VESA mount, and also 5 lights on the left and right sides which provide an under glow effect. The effects are limited to just 3 through the OSD, and outside of rainbow you seem stuck to the color blue, but you can turn all lighting off if you prefer. 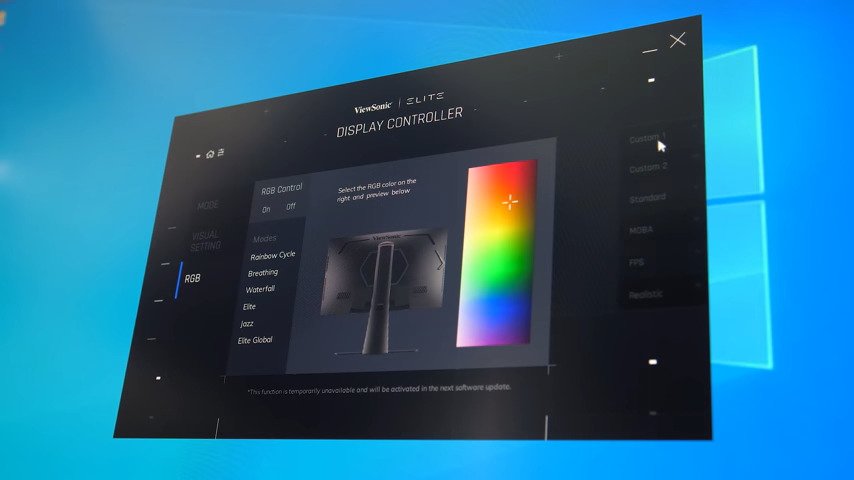 There’s software you can download from the Viewsonic website to manage the monitor, you just need to connect the included USB Type-B cable to your PC to use it. Most of the functionality is locked at the moment as it’s in beta, all I was able to do was change the RGB lighting, but this does give you more effects to choose from compared to the OSD as well as color selection.

So far the monitor looks pretty good, but how was it to actually use day to day? I normally use a 32” 4K monitor as my daily driver for video editing, so swapping to 27 inches (68.58 cm) at 1440p was a little adjustment. Overall I thought it looked great, and when playing some games that are actually able to spit out high FPS gameplay just felt smooth, probably due to the combination of 165Hz, G-Sync and the 1ms GTG response time.

Unfortunately all of this comes at a cost. At the current time, the Viewsonic Elite XG270QG goes for $600 USD, while we’re looking at double the price here in Australian dollars, the current human malware issue has killed our exchange rate.

It’s really difficult for me to talk about value and how this stacks up compared to others, as I haven’t personally tested much else with similar specs. I can see there are what appears to be similarly specced panels for less money on Amazon though. That said, without having tested others, this one did feel great to play games on. The only issue I had was the bleed towards the bottom right on my unit, otherwise I thought it was excellent.

Let me know what you thought of the Viewsonic Elite XG270QG gaming monitor down in the comments, and also let me know if you’re interested in more gaming monitors, I had a few requests lately to see some more and I’ve got another here to test out.