This Is Why Birds Are So Affected by Oil Spills 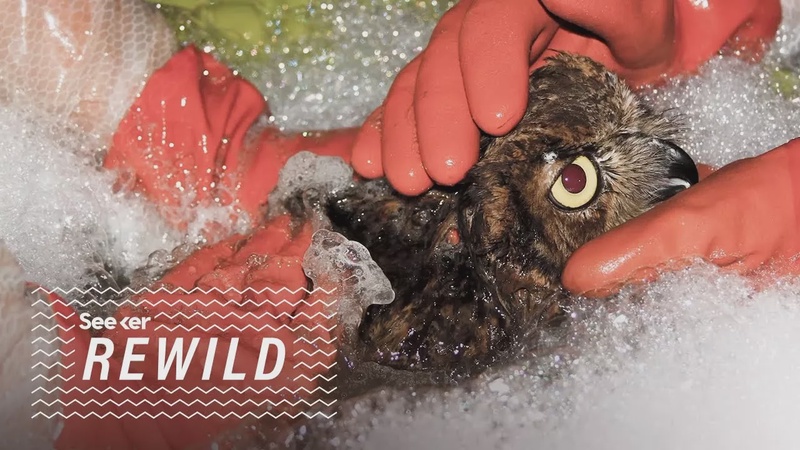 We've been using our planet's rivers, lakes and oceans to ship crude oil from place to place since the beginning of oil. And while that is an effective way to move thousands of gallons of petroleum around the world. There is of course the risk of oil spills. Those unfortunate events have wreaked havoc on marine ecosystems, bringing to mind images of sinking ships, black beaches, and oil-soaked wildlife.

International Bird Rescue was founded in 1971, in response to a major oil spill outside of the Golden Gate Bridge - about 800,000 gallons of crude oil spilled.

And at the time, there was absolutely no recognized practice of what to do with oiled wildlife and especially oil birds. International Bird Rescue's mission is to inspire people to take action on behalf of the natural world.

International Bird Rescue do it by rescuing water birds in crisis, but we hope that people choose to do it in their every day.

This is an extreme close up of a bird feather.

And these are the barbs and barbules that when lined up, make these marine animals both waterproof and buoyant. Obviously important traits for birds that spend their days on the water.

When they have lined up just right, almost like Velcro. That will become an impenetrable surface, and that will keep the heat in the water out. And it's the work done with their beak in preening that realigns the little barbs and barbules in the feathers and it is a physical structure of those feathers that makes them waterproof and that's the really the amazing part of it.

But it really is more than just waterproofing. It's about being able to thermoregulate in cold water environments. When birds encounter this soil, it affects their feathers ability to line up those bards and barbules.

Oil clumps. You can see that when you pour oil on water or even when you make salad. On feathers, it creates a clumping as well where those structures are not, they're wet, they're they're actually stuck almost gummed together.

The gumming will ultimately prevent the birds from creating their Velcro-like seal. And it really can be the smallest little spot of contamination can be the end of a bird.

Because waterproofing is so critical to their survival birds will unsuccessfully tried to preen in order to realign their feathers, but that preening can lead to the bird ingesting some of the oil, which can also be fatal.

And in fact, one of the things most people don't know is that the birds more covered in oil are more likely to have a positive outcome, because it's obvious they need help birds that are only oiled in a small patch that's maybe not visible in their feather colors will be out longer, it'll be sometimes too late by the time they're they're brought into care.

After an oil spill occurs, they'll take action to pull the affected animals from the contaminated area and start the cleaning process. This not only helps save the animal, but it's also important for the bigger environmental picture.

Oil is a chemical, it does cause burns, so it would be a suffering death. And then that wouldn't be the end of it, you have scavengers you have gulls, foxes other kinds of animals that would be very happy for a free meal and not be very discerning about taking in the additional chemicals themselves.

This is called secondary oiling, it could have extremely dire consequences to both ecosystems and food chains.

So how do you effectively remove oil from a bird.

Unfortunately, the only thing that removes oil is other kinds of oil. So you find safer versions of that which we do use, and the soap is what removes it ultimately in the long run, a thorough rinse is necessary after that making sure that all the soap is gone. Then we dry the bird and go through a process of bringing it out into warm water and testing whether the cleaning has been successful and that they are now waterproof.

In order to study how the birds fare after their release, International Bird Rescue has been banding their patients and so other researchers and citizen scientists can track their migration.

Probably 99% of all the birds that leave our centers have what is called a federal ID band. There's a part of US Geological Society that called the Bird Banding Lab that for nearly 100 years has been tracking individual birds.

And the banding has helped the International Bird Rescue prove that their rehabilitation efforts work with some banded birds being spotted over 15 years later in the wild.

There is now a global network, a small network of folks who specialize in oiled wildlife care. There are lots of places in the world that do not have such specialty. But that oil is moving quite frequently.

Countries increasing their oil production could benefit from knowing how to treat wildlife in the event of a spill.

Places like Nigeria and Scandinavia. What is going to be necessary to train those local communities, local rehabilitation to find the right resources and funding to be able to respond to the next big challenge. We try to share that stuff broadly, the good news, at least in the United States, is that regulations and cargo ships etc. are having positive impacts.

The number of oil spills and especially large oil spills is going down drastically.

But that doesn't mean we're in the clear. Oil is still a problem and new threats are presenting themselves, every day.

The questions are bigger than the answers but the challenges to me seem pretty evident changes to the food source and the temperature of the water especially along the coast seem to be creating big challenges. And time is only going to tell  what new things are rising.

Whatever the cause, organizations like the International Bird Rescue are committed to finding solutions, because those solutions won't just help save seabirds, it can also help our species as well.

You do not have to be a bird lover to know that paying attention to animals is a key part of our own survival. Birds are a couple steps up the food chain but have really critical roles. If animals have departed from an environment I think there is a very strong reason for humans to be nervous as well. Wild animals are wild animals and our goal is to release them as cautious and tense around human beings as when they arrive.

Stereotypes that are killing application design