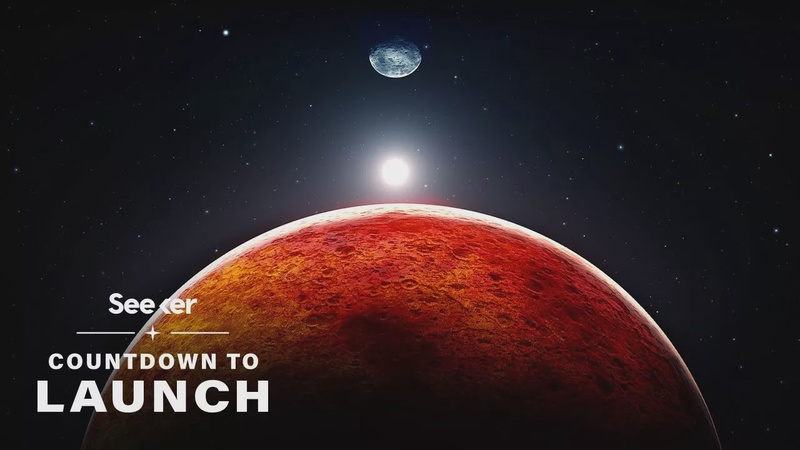 We’re heading to Mars again. But this time, it will be the first round-trip mission, not to the Red Planet itself, but to its moons.

In case you didn’t know, Mars actually has two moons and JAXA is planning to land on one of them, Phobos, and map the other, Deimos. Once there, the spacecraft will observe and collect samples for return to Earth, bringing back dust and rocks that haven’t been present on Mars for billions of years.

The information held within the surface material could potentially help us understand the formation of the Red Planet and its moons… and by extension, the formation of our solar system. Or these samples could hold valuable clues to how life could have begun.

This mission, known as Martian Moons eXploration, or MMX, is hoping that Phobos and Deimos could provide some insights on a few key areas of debate. Starting with, where did these moons come from?

The first theory is that the moons are leftover fragments from a giant impact Mars experienced during its formation. If this is true, the moons could reveal rare clues about Mars’ early environment. The second theory is that these moons are captured asteroids, pulled into Mars’ orbit separately after it formed. If this is true, the samples brought back could not only determine the moon’s origin but also clarify how volatile substances, such as water, are brought to planets, making them habitable.

Regardless of where the moons came from, they are expected to have accumulated at least a billion years worth of ejected material from the Martian surface. This is just another valuable source of data that researchers can dive into. So, it’s really a win-win scenario. No matter what the samples tell us, we'll finally have some answers.

With so much at stake and other countries failing to make it to the moons, how has JAXA prepared? Well, this isn’t their first space rodeo. MMX will actually be the agency’s third sample-return mission. In 2003, they sent Hayabusa to collect samples from the small asteroid Itokawa, successfully returning in 2010.

And in 2014, they sent Hayabusa2 to the asteroid Ryugu.

Learning from the challenges and achievements of these previous missions, MMX will be utilizing a lot of the same strategies to collect the samples and return home. MMX system’s design is composed of three modules: the propulsion, exploration, and return. These modules give the craft a total launch mass of about 4,000 kg.

Before landing on Phobos, MMX will use its suite of instruments to conduct remote sensing observations that will help determine the composition of the moon. These consist of cameras, spectrometers, a light detection and ranging instrument, a dust instrument, and a gamma-ray and neutron instrument. There have even been some recent additions from JAXA, including a super high-definition 8K camera and a rover that will explore the surface of Phobos, conducting observations with its own spectrometer, radiometer, and wheel cameras.

As for their sampling system, JAXA is going with a double sampling approach. Remember, this moon has never been visited before.

Much is unknown about the regolith on Phobos and it’s possible ties to planet formation… or even how life began in the solar system.

The first approach will use a robotic arm to collect a sample of regolith 2 cm beneath the moon’s surface, also known as a core sample. The second approach, called pneumatic sampling, will collect regolith from the surface, using air pressure to push the sample into a collection chamber.

JAXA plans on launching this moon-hunting mission sometime in 2024, and so far, it’s on track. But before we all get too excited, it will be awhile before we get to check out these samples, as MMX isn’t scheduled to come home until 2029. However, it will be worth the wait for this potentially groundbreaking data, as it could reveal how our solar system formed and maybe even how life started on our planet. Not only that, but the success of the very first Mars return mission will be a landmark step towards shuttling humans to the Red Planet.