Do you know the global Microservice Architecture market size is predicted to expand at a CAGR of 18.41% during the forecast period, reaching USD 7385.6 million by 2027?

Microservices architecture is becoming increasingly popular in the software development world. It allows for faster deployment, scalability, and easier maintenance of applications.

However, implementing a microservices architecture can be both time-consuming and complex.

The key to successfully implementing a microservices architecture is selecting the right technology for the job. In the following discussion, we'll explore 6 of the best technologies to help you build microservice architecture.

We'll look at their benefits and key features so you can decide which is right for you.

So, without further ado, let's get started.

Microservices architecture is a design approach in which an extensive application is divided into smaller, independent services that communicate with each other using well-defined interfaces.

The following stats represent the rise of the microservice architecture industry from 2016 to 2023.

Microservices architecture can be a good choice for large, complex applications that need to be highly scalable and flexible.

It requires a significant investment in infrastructure and tooling but can pay off in the long run.

Microservices architecture has several benefits, including:

Why Should You Choose Microservices For Your Business?

Here are the potential reasons determining why a business might consider using microservices architecture for their applications: 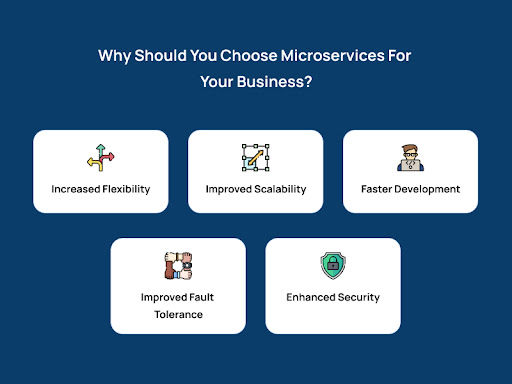 They can replace or update a single service without affecting the entire application. It will enable companies to respond promptly to market, or customer needs changes.

As applications built using microservices are composed of small, modular components, they can quickly scale up or down depending on the demand. It helps businesses to respond quickly to changing conditions or customer demands.

Services can be developed and deployed independently, which allows for faster deployment of new features and updates. It benefits businesses that must rapidly iterate and release new features to stay competitive.

If one service fails, it can be isolated and fixed without affecting the rest of the application. It improves the reliability and uptime of the application, which is essential for businesses that rely on their applications to generate revenue.

As services are decoupled, it is easier to identify threats and isolate and mitigate them. It gives businesses greater peace of mind that their data and applications are secure.

Wondering how to build microservices architecture?

Let's talk about the six technologies commonly used for building microservices architecture one by one. 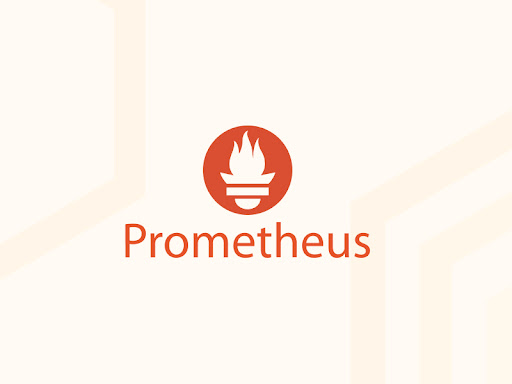 Prometheus is an open-source alerting and monitoring system. It is designed to collect metrics from various sources, store them in a time-series database, and provide tools for querying and visualizing the collected data.

The technology is often used in cloud-native environments to monitor the performance and availability of microservices.

It provides a flexible query language allowing users to filter and aggregate data in real time and an alerting system that can send notifications when certain thresholds are breached.

Prometheus integrates with other tools and technologies such as Kubernetes, Grafana, and OpenTracing.

The technology is a popular choice for monitoring distributed systems and is widely used in the cloud-native community.

If you want to integrate Prometheus technology when building your application, hire software developers from leading IT company to get it done effectively.

Prometheus stores all collected metrics in a time-series database, allowing users to query and visualize data over time.

It provides a powerful query language called PromQL that allows users to filter, aggregate, and manipulate data in real time. 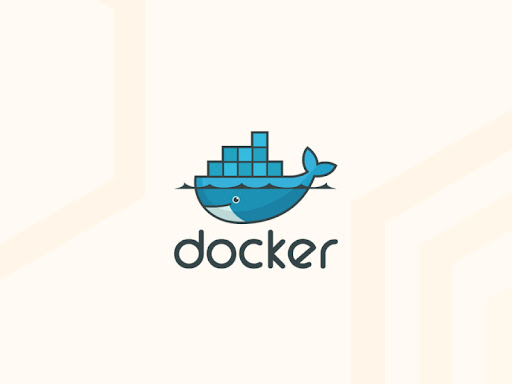 Docker is a containerization platform that helps software developers to package applications in lightweight containers for easy deployment and cross-platform capabilities.

Containers are used to distribute software in a way that is isolated from the host system, but still able to run on it. It helps developers develop, test, and deploy apps quickly, as the app and its dependencies are packaged together in a single container.

Docker is often used with tools like Kubernetes for managing and scaling containerized applications.

Docker allows developers to package their apps and dependencies in lightweight, portable containers.

Containers provide isolation for applications to ensure the app and its dependencies do not interfere with the host system or other applications.

Docker allows developers to version their containers, making it easier to track changes and roll back if necessary. 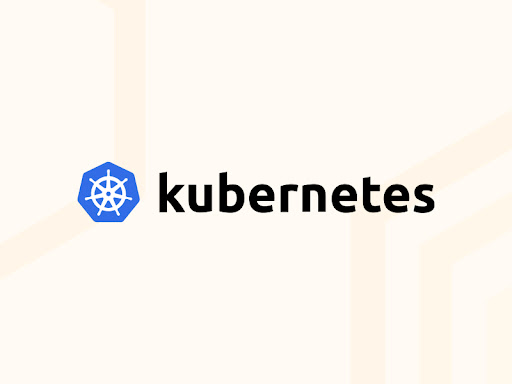 It was initially developed by Google and later maintained by CNCF (Cloud Native Computing Foundation).

The technology is often used in cloud-native environments and is a popular choice for managing microservices and other distributed applications.

It is extensible through various plugins and integrations and has a large and active community of users and developers.

Kubernetes can automatically place containers on available resources in an efficient manner. It can help ensure that apps are running at optimal capacity.

It can automatically detect and recover from failures, such as a container crashing or a node going down.

Kubernetes can automatically roll out and back updates to applications, which can help reduce downtime during deployments.

It can manage the storage needs of apps, including attaching persistent storage to containers and providing access to shared storage systems. 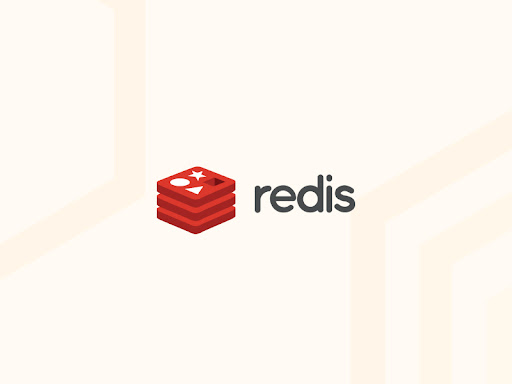 Redis, an open-source, in-memory data structure, can be used as a cache, database, and message broker.

It is a key-value store that supports many data types, including strings, hashes, lists, and sets. Redis is known for its high performance, flexibility, and scalability, which makes it a popular choice for building real-time applications. It is written in C and supports multiple programming languages, including Python, Java, and more.

The technology is often used for caching, real-time analytics, and message brokering tasks.

Key features of Redis include:

Redis stores data in memory, making it extremely fast for read and write operations compared to other databases that rely on disk-based storage.

It supports two forms of persistence: snapshotting, which saves the in-memory data to disk at regular intervals. And journaling, which logs every write operation to a file on disk.

It has clients available in many different programming languages, including Python, Java, C++, and more. 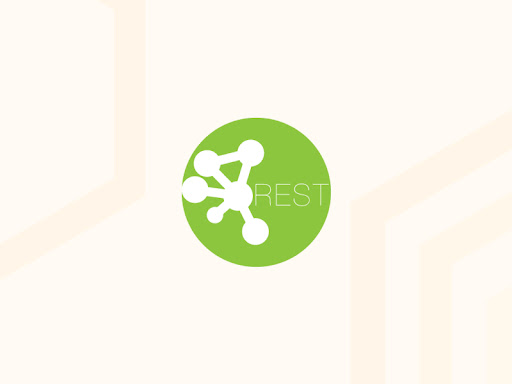 REST, or Representational State Transfer, is an architectural style for building web APIs (Application Programming Interfaces). It is based on principles that make creating flexible, scalable, and maintainable APIs easier.

The technology is famous for building APIs because it is flexible, simple, and easy to use. It is often used with other technologies, such as JSON or XML, to create powerful and easy-to-consume APIs.

REST APIs use HTTP as the primary means of communication. It helps REST APIs to integrate with any device or software that can make HTTP requests.

REST APIs are designed to be cacheable, i.e., they can be stored in a cache and reused to improve performance.

REST APIs are designed to be a layered system, with each layer interacting with the layer below it through a standardized interface. 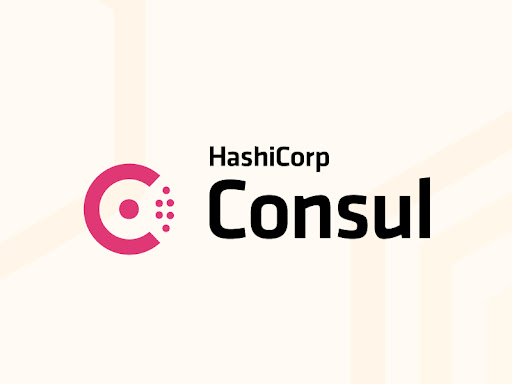 Overall, Consul is a powerful tool for building and managing distributed systems. It is widely used in large, complex environments where service discovery and configuration management are essential.

Key features of the Consul include:

Consul allows services to find and communicate with each other by name, using DNS or HTTP interfaces.

Consul can monitor the status of services and take action if they become unhealthy.

It can manage service configuration data, including support for templates and variables.

It can be integrated with other tools, such as load balancers, service mesh technologies, and monitoring systems.

Microservices architecture is a great way to maximize the efficiency of your application development. You can create a more agile, flexible, and maintainable environment by breaking down large applications into minor, more manageable services.

With the right technologies, businesses can create a robust and reliable microservices architecture that meets their needs. Also, by getting in touch with reliable software development services, you can create top microservice architecture for your software project in a more effective way.

What is the use of Microservices Architecture?

Laravel vs. Django: Which Framework Should You Use?

How to Find the Best Fintech Software Development Company

How to Develop Time and Attendance Software?

How to Develop Visitor Management Software?

Development and implementation of software for medicine and healthcare

How to Write a Software Development Business Plan?