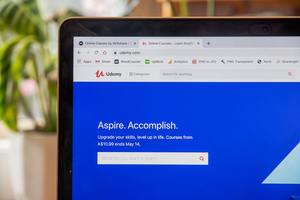 Online education has become one of the hot spots in the tech world this year when users shift to e-learning tools to fill the holes that emerge from closing schools, closed workplaces, social distances and more time at home as a result of the COVID-19 pandemic. And that provides a big boost to start-ups in education, raising funds to build on the growth potential.

In one of the new inventions, Udemy—which currently offers a marketplace of some 130,000 video-based courses in 65 languages, ranging from mastering Python or how to properly photograph, through mastery of mindfulness and business analytics—raises up to 100 million in a Series F investment round worth up to $3.32 billion.

The organization filed a paperwork for the fundraiser in Delaware, which is first noticed by Justin Byers and the Prime Unicorn Index squad. It is not clear if the round has been closed and whether (or rather more) the full sum has been raised.

Contacted for a comment, Udemy did not refuse the story, but refused to say anything for the time being. "We've got a corporate policy that we don't comment on rumours," a spokeswoman told me via email. "We don't had responded at this moment, but whenever any thing  going to reach out if anything changes.

The funding will be a good step for Udemy, which closed its E-Series earlier this year—a $50 million round that catapulted Udemy to a $2 billion+ post-money valuation.

But it was in February, before the novel coronavirus finally took care of the planet. Starting in the spring of this year, start-ups focusing on education have seen a rise in business and as a result, there has also been a surge in interest from investors who see a decent time to back up rising stars.

Looking at some of the more recent deals, last week, Udacity reported a $75 million loan round and said it was finally profitable. In October, Kahoot revealed a $215 million SoftBank round. And in September, Outschool raised $45 million (and is now profitable); Homer raised $50 million (from an outstanding network of strategic backers); Unacademy raised $150 million, and Byju's Juggling raised $500 million from Silver Lake.

And these are just some of the larger deals; there have been a lot of smaller fundraising, new edtech start-ups and other signs of traction along the way. (And Prime Unicorn, by the way, also noted that Duolingo is also raising capital, up to $35 million at a value of $2.21 billion if all the shares are issued.

When Udemy last raised money earlier this year the head of the company division informed me that 50 million students had purchased courses in an à la carte format, while business customers—including Adidas, General Mills, Toyota, Wipro, Pinterest and Lyft—used a subscription model.

It looks as if its business users have expanded and now number more than 7,000, according to the figures on its site, with a total of 400 million entries to date. This might point to the opportunity that Udemy is now pursuing for more money.

But to be sure, the filing does not clarify who is in this latest round or what the object of the fundraising is.

As we wrote at the time earlier that fundraising came from only single strategic donor, the Japanese educational publisher Benesse Holdings, which is working with Udemy in Japan. Benesse's broader company involves producing instructional content for children and adult classes, both online and in-person, and for other educational products that it owns, such as Berlitz, and Udemy helps Benesse create content for these varied efforts.

Prime Unicorn Index notes that the terms of this new Series F include "pari passu liquidation preferences for all other preferred and traditional convertibles, indicating that they will not invest in common shares if there is any residual proceeds." It also notes that Udemy's most recent price per share is $24.13, and round-up of the Series E, which priced shares at $15.57.

How Social Commerce Can Help Brands To Boost Festive Sales