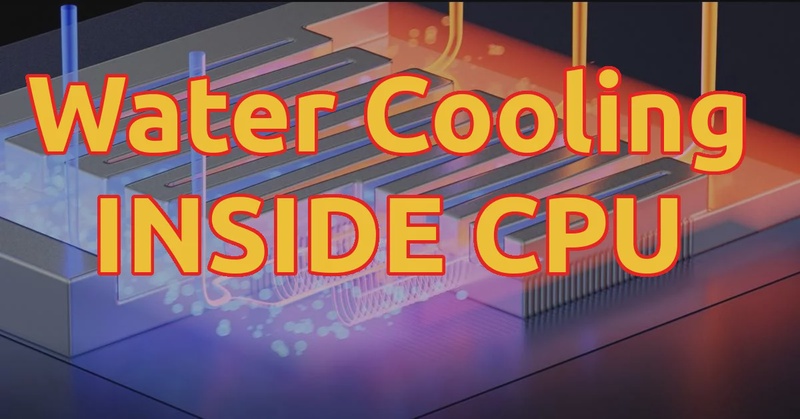 This is a PC with an all-in-one closed loop cooler to keep the CPU from overheating.

And unless you're tryna perform an extreme overclock, it's a pretty good solution. But, even with the best cooler on the market your CPU will still be quite warm. And you know, what? Why do we need water blocks at all? I mean, look at this processor.

All of this space inside that black square is dedicated to an integrated heat spreader. So, would it be possible to instead build water cooling right into the die itself?

As it turns out? The answer is yes. And to find out more, we spoke to Elison Matioli, a Professor of Electrical Engineering at the Swiss Federal Institute of Technology, in Lausanne, where he and his team recently developed an all new in-chip cooling solution.

We'd like to give him a big thank you for taking the time to talk with us. So a big part of their approach was to look at the electronics, and the thermal management, as a single problem rather than the paradigm that we're more used to where, one company works on making chips, and another one works on making heat sinks or water blocks.

Instead, the idea was to design a chip in concert with an integrated liquid cooling solution so that you would already know where the hotspots were.

To demonstrate this idea, they used a device that generates a lot of heat. In this case, a power converter, and then etched water micro channels into a layer directly below the gallium nitride chip that handled the power conversion, with small capillaries below hotspots, and larger channels operating as inflow and outflow pipes.

The small channels adjacent to the warmer areas of the chip provided lots of surface area for heat, making thermal dissipation very efficient compared to traditional solutions, involving a separate heat spreader, heat sink and thermal paste. Remember guys, you lose a lot of efficiency with each step.

The chip only got up to 60 degrees Celsius compared to the blistering 250 degrees that we would have seen without cooling. In fact, their solution ended up being able to extract 1.7 kilowatts per square centimeter, using only half a watt of pumping power.

Conveniently, a square centimeter is well, roughly the same size as a modern processor die. And even high-end processors have TDPs in the neighborhood of just 125 to 250 Watts.

So with a solution this efficient, you could cool a chip down to near room temperature, especially as the process would work just as well with more familiar Silicon processors. I mean, the amount of heat that a typical chip puts out, is a whole order of magnitude less than what in-chip cooling could handle.

But, hold on a second. Is this some kind of pipe dream that's just never going to leave the laboratory like DNA storage? Unless it does, eventually. Or could we actually see this in our desktop rigs in the near future?

Well, it turns out it would actually be fairly trivial for a big chipmaker to replicate this microchannel process in a standard clean room. And the research team in Switzerland has already had a number of companies approach them about using this technology in the coming years.

The most obvious benefit will be for our server farms and data centers, where huge amounts of money are already being spent to keep energy costs low and well, processor temperatures lower.

However, there's no reason at all that we couldn't see it in our home gaming computer at some point, which could allow for significant increases in overclocking for enthusiasts, or, maybe even better gaming on mobile devices or small form factor PCs. Since this in-chip solution doesn't need nearly as much liquid to function correctly as a traditional water cooling loop.

Understandably, the lab couldn't tell us much about exactly which companies were inquiring about in-chip cooling. But, that shouldn't stop you, or us, from dreaming about the possibilities of having a water-cooled smartwatch one day. Why not, right?