What Exactly Is Fracking, And Is It Really That Bad? 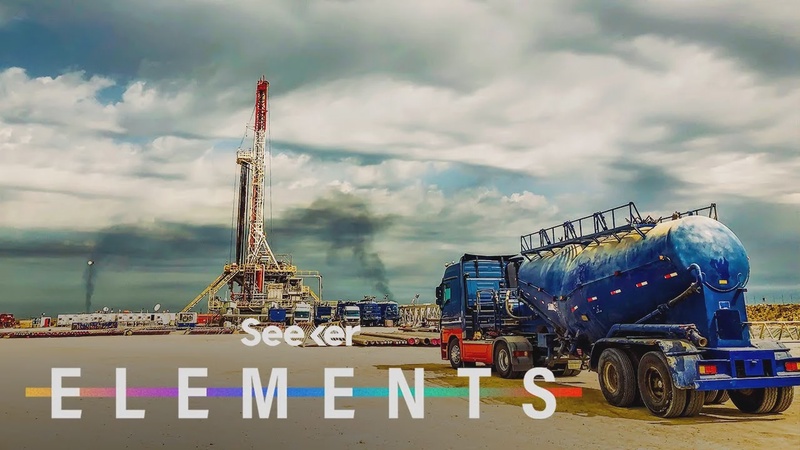 In a world that’s demanding more and more energy every year, solutions for cheap and accessible fuel are more important than ever. There’s an estimated 214.6 TRILLION cubic meters of untapped natural gas underneath our feet around the world, and many places are just starting to explore how they could use it. So, how do we get it out of the ground, why is this process so controversial... and is it worth it?

See, deep below the earth’s surface, fuels like petroleum and natural gas are trapped inside sedimentary rocks like shale. Shale’s properties mean that this fuel isn’t all sitting in one convenient place — it’s trapped in tiny little pockets of rock, some of which can be up to 20,000 times narrower than a human hair! As you can imagine, this makes it pretty much impossible to get the fuel out using conventional drilling methods, so instead we use something called fracking.

This is how it works: A well is drilled wayyyy down into the shale layer— this can be a mile or more beneath the Earth’s surface. Once it reaches the shale, the well is then drilled horizontally, which again can extend for a mile or more. Then a fluid mixture containing water, sand, and a bunch of chemicals is blasted down the well at extremely high pressure, breaking the shale apart.

As the gas is released from the rock, it flows back into the well, where it can be sucked up to the surface to be collected and separated from the fracking fluid. The whole part where the rock is blasted apart by high pressure fluid is where the technique gets its full name: ‘hydraulic fracturing,’ or fracking for short.

There are lots of economic arguments used by proponents of fracking to justify its usage. Since 2000, oil and natural gas production in the U.S. has boomed dramatically, partly thanks to fracking. That boom has helped the US become the world’s largest oil producer. This in turn has lowered energy prices in some places, for some people, some of the time. And the fracking boom did boost jobs in this sector, contributing to overall economic growth.

But a lot of these stats are just a smokescreen. Because see, the fracking industry in the U.S. is actually completely reliant on government subsidies to keep it going, and it hemorrhages money — the U.S. fracking industry hasn’t actually made any profit in over a decade. The price of natural gas is artificially low, and doesn’t accurately reflect the incredible cost of getting that fuel out of the ground.

Because the other common claim in favor of fracking is that natural gas is better than coal in terms of greenhouse gas emissions... but that’s just when the end product is burned. This idea that fracking is better than coal doesn’t take into account how harmful the fracking process is. A recent study out of Cornell University found that when you take into account the large quantities of methane and other gases that are released by the PROCESS of fracking, fracking overall actually contributes more to global warming than coal does.

And it’s not just about the greenhouse gases. Because fracking is still a process that’s very difficult to control. When that high-pressure fluid disturbs the shale to extract the gas, there’s a high probability of nearby groundwater becoming contaminated with that gas. Or, when the fracking fluid is brought back up to the surface, that fluid is often spilled and seeps into the surface and groundwater. What’s problematic is that in a lot of cases, these fracking chemicals are actually a secret— we may not know what all of them are because they’re ‘confidential business information.’ Even when we do know what the chemicals are, we’re still not sure how some of them may affect human health or ecosystems, and for those we do the effects of, we know to be toxic or carcinogenic.

Chemical contamination has been shown to be an issue of major concern at fracking sites all over the U.S. In a particularly extreme example, research published in 2011 showed that tap water in homes near fracking sites in Pennsylvania have been contaminated with methane at a level that is officially classified as dangerous to human health. In some cases the methane contamination was so severe that the tap water itself could be lit on fire.

In addition to contaminating water sources, the actual process of fracking also uses a truly COLOSSAL volume of water. Just one fracking well may use anywhere between 1.5 million and 16 million gallons of water to squeeze that natural gas out of the shale. This can put a strain on communities where fresh water is already in short supply, especially in the face of extended droughts and dry seasons due to climate change.

This water usage is actually only rising as fracking advances, because new fracking technology demands more water usage, not less. And just as a last little bonus: In a few instances, fracking has even induced earthquakes in places that don’t normally experience them. The high pressure water blasting and dissolving rock structures deep beneath the surface can cause some rockin’ and shakin’ as things shift and rearrange. We also have to remember that the products of fracking are still fossil fuels that produce greenhouse gases. And while the end product is technically cleaner than coal and conventional oil when burned, and fracking does actually use less water than coal production—which is one concrete stat in its favor— the debate rages on as to whether fracking in its entirety is worth it.

So, should we keep pursuing fracking as a solution to our energy needs? Or should we be putting that focus toward cleaner, greener technologies? In my opinion, we really need to think of it as just a temporary bridge to get us to our more sustainable energy future, because while fracking has become commonplace, it’s pretty fracking risky.

What Exactly Is Blockchain?

What is a Container and Why Would You Want to Use It?

This Is Why Birds Are So Affected by Oil Spills