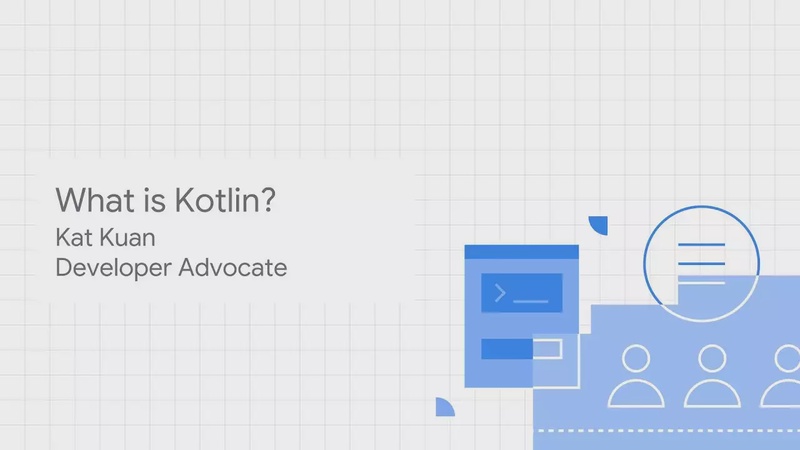 So what is Kotlin? So Kotlin is a modern programming language, and it has been inspired off of the languages that came before it -- Java, C#, Python. The creators of the language really tried to take the best of those languages and really put it into a single language that makes it really easy for developers to use and helps them be really productive.

It is a general purpose language. It supports functional programming, as well as object-oriented programming paradigms. It's also statically typed. The type of the data is determined at compile time, so that helps catch a lot of errors in your code ahead of time. But it also has a powerful type inference system. When you're defining your variables and things like that, if it can infer what the type of data it is -- like for example, it's going to be an integer -- then you don't have to explicitly say that it's going to be an int. And so by being smart about it and knowing what type that you want to use, it actually cuts down the amount of code that you need to write, making it faster for you to develop.

Kotlin is also open source. It was created first by JetBrains, and there's a whole community of contributors contributing to it and also JetBrains and Google have formed the Kotlin Foundation as a partnership to really promote, protect, and advance the Kotlin programming language. So there's a lot of investment in this language to move it forward.

This project, the Kotlin project, started in 2010. And then Kotlin 1.0 was actually released in 2016, and then it just kept picking up steam. In 2017, Google announced that it was officially supported language for Android. And that was huge news because before, when building Android apps, you had to use Java. But now, you can write them in Kotlin. So both are equally supported now. You can use Java or Kotlin, but Kotlin is rapidly gaining popularity. And in recent years, in 2019, at Google I/O, Google announced that Android would become Kotlin first. So some of the new features, like the Jetpack features and API, some of those new things are going to be Kotlin first.

I also wanted to add that Kotlin, as a language, has also been improving over time. So as recently as March of this year, Kotlin 1.4 preview has been announced. So they're just adding features to improve the language on a continuous basis.

Why Kotlin? When we as developers, what they enjoy using about Kotlin, there is some top reasons about why developers love Kotlin.

First of all, it's a very expressive language. And when I say expressive, it means that you can express the concepts that you want in your code with very few lines of code. If you have a lot of boilerplate code in Java, you can actually reduce it to very few lines of Kotlin code. And so it's kind of a magical moment there. And there's so many different little things that Kotlin does to help you write shorter code -- like I was saying earlier, type inference. So that's a great thing to help us become more productive.

Also, code safety with type system. It really tries to help you catch your mistakes ahead of time or prevent you from even making mistakes in the first place. So there's something called null safety where Kotlin really tries to prevent null pointer exceptions.

Another huge feature is that Kotlin is 100% interoperable with Java. So for those of you who already have projects in Java, you can add Kotlin to it. And it will work seamlessly. So if you already have an Android app in Java, you can perhaps add unit tests in Kotlin. Or you can add as little or as much Kotlin as you want. And so over time, then more of your code base can become more Kotlin. That's a great feature. It's not like you have to commit right away. You could slowly add new features in Kotlin to your app.

Next is tool-friendly. That was one of the huge -- one of the things that the creators of the language really wanted to get right. They wanted to make sure that it works with existing tools and infrastructure. So there's great tooling support. You can use IntelliJ or Android Studio or Eclipse -- a number of popular tools.

Also, another big benefit of Kotlin is structured concurrency. In an Android app, typically you will have a lot of background operations like network calls or database operations. And when you do those, your code can get kind of complicated. There's a bunch of callbacks. It could be hard to debug. And so with coroutines and what's offered in Kotlin, you can actually make your code more sequential so it's easier to read. Kotlin has actually grown to be the number four most loved language among developers based on the Stack Overflow Developer Survey in 2019, so it is a language that a lot of developers are very excited about.

How Can an Image or Text WRECK Your Phone??